Start by searching for a player by name.  Enter the battletag or play name in the search box and select the platform.  Hit the search button to query the OmnicMeta servers for the player profile!

If the player exists, the player's "Player" statistics page is loaded.  Basic player statistics for the current competitive season are displayed at the top of the page: player level, skill rating and tier, match record, and winrate.  Also shown are navigation links to "Heroes" and "Sessions" player statistics pages which will be covered later.  You can swap between Quickplay and Competitive data, or "refresh" to get a fresh copy of you career stats from Blizzard.  If find any errors or want to request a feature for the site, you can click the "Bugs/Features" link in the bottom right.

Immediately below the basic player statistics are overview charts for the player's seasonal progression.  The charts show skill rating, winrate and  session record over time, and mousing over the data points gives specific data for each of those categories.

The rest of the "Overview" player page is a list of hero statistics for each hero played in the season (most player heroes at the top).  For each hero, the match record, winrate, time played, and tier ranking is shown at the top.  The tier ranking for the hero is the overall percentile that the player is in as compared to other players of the hero in the same tier, ranging from 99% (great at the hero) to 1% (poor at the hero).  In the example above, Player#1234 is a 79% Moira player in Platinum - or above average (50% is exactly average).  Next, the six most critical statistics for the hero are shown, each with a percentile comparing the player's ability with other players of the hero at the same tier.  Each statistic is shown on a per/minute basis.  "Mousing over" each statistic brings up a tooltip which compares your play to the average in your tier, as well as "specialists": other players in their tier than "main" and play the hero for the majority of their Overwatch competitive matches. 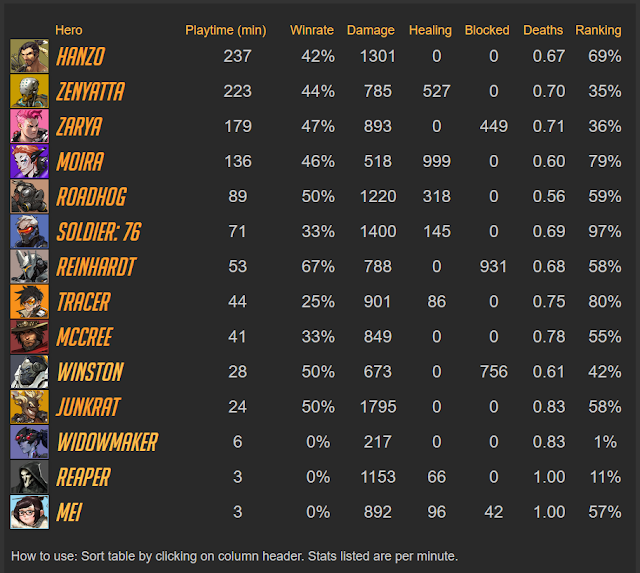 Players can click on the "Heroes" link next to their player name at the top of each page to see a list of the heroes that have been played in the current season.  For each hero, links to individual hero statistics pages, time played, winrate, and overall tier ranking is shown.  The list can be sorted by clicking the column headers.  For example, to sort the heroes by Winrate, simply click on the yellow "Winrate" label at the top of the column.

Clicking on a hero brings up more detail about your play.  The distribution for each of the six main statistics are shown.  You can "mouse over to look at various points in the distribution - for example, while the player is ranked in 73% for deaths per minute at 0.60 deaths/min, the 50% is 0.67 deaths/min.  Finally, the two highest and two lowest statistics are listed at the current "Strengths" and "Weaknesses" of the player on the hero.

On the same per hero page, there are trend charts detailing the player's progress over time for each relevant statistic, including winrates, match record, player ratings, and the six hero-specific statistic categories.  A color-coded chart showing the six statistics ratings and the overall ranking helps the player see percentile trends across the competitive season.  Finally, for the overall tier ranking and the six statistics, breakout charts show daily performance on the hero. 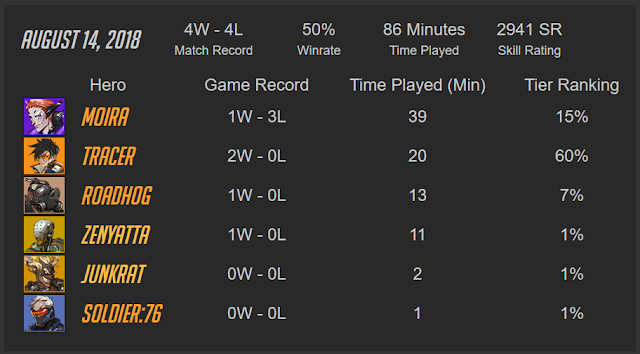 Players can click on the "Sessions" link next to their player name at the top of each page to see a summary of recent daily sessions.  The session match record, winrate, time played, and ending skill rating are shown at the top of each session.  A list of the heroes that have been played in that session are show, season.  For each hero, match record, time played, and the overall tier ranking is shown.  Players can click on the hero names in the list to go directly to that hero's statistic page.