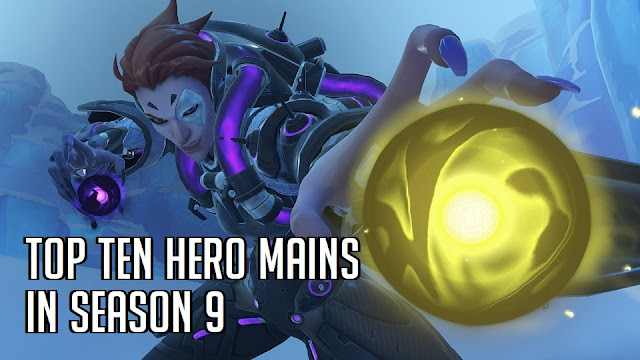 The biggest decision that Overwatch competitive ladder players have to make is which hero to play. Knowing the meta game and which heroes fit well is the big determining factor when it comes to deciding which hero to play. In this article, we analyze the popularity of hero mains. A player has a "main" hero when that player plays more than 50% of all games with that hero. Using the data for hero usage collected in Season 9 for PC, we break down the most popular hero mains for each tier.  As always, enjoy!

OmnicMeta analysis articles are supported by our generous patrons on Patreon. A special thanks to Diamond-level sponsors: Top Score Solutions and Ben Wilson. Patrons get rewards such as getting access to articles earlier.  You can find out more here. 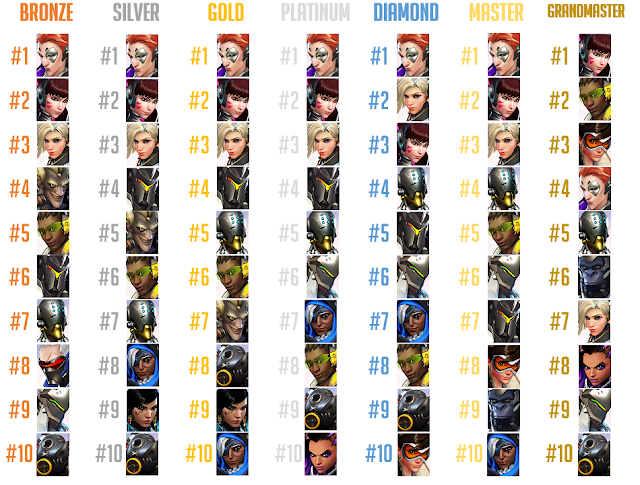 The figure above ranks the top 10 most popular hero mains in Season 9. Due to their popularity, these heroes are perceived to be the strongest in the game at each respective tier and can generally fit into most competitive ladder team compositions.  In other words, these most people heroes to main are generally meta heroes.

We see a few heroes consistently in the top 3 - namely Moira, D.Va, and Mercy.  Each of these heroes are firmly in the meta at most tiers, however at Grandmaster a very different set of heroes emerge - D.Va, Lucio, and Tracer are the most popular heroes to main.  Supports generally make up most of the top ten across tiers, with Moira, Mercy, Lucio, Zen and Ana in nearly every tier - every healer in Overwatch.  In other words, 5 out of 10 of the most popular heroes to main are support heroes - leaving the other 5 slots to the other categories.  Tanks are also populat as mains, with D.Va, Reinhardt, Roadhog found at most tiers - with Winston at the highest tiers.  For DPS heroes, Genji is the only hero consistently found across the tiers. Junkrat is very popular to main at the lowest tiers, with Tracer popular at the highest tiers. 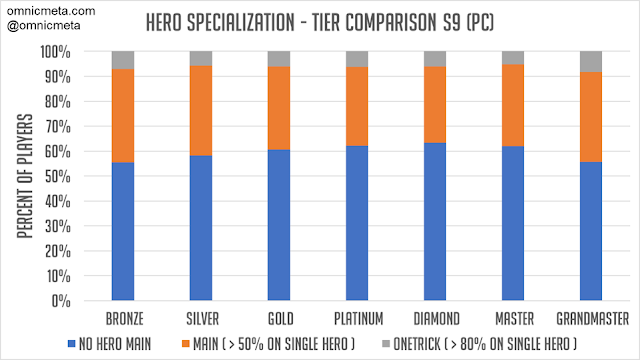 The above chart demonstrates the prevalence of hero specialization in Season 9.  Depending on the tier, 37% to 45% of all Overwatch players have a hero mains, and 4% to 8% of those players are one-tricks players (>80% of all games on a single hero).  That is significantly up from prior seasons - meaning that more and more players are choosing to specialize in heroes, despite a diverse meta and a growing number of heroes available for play.  The prevalence of hero specialization is similar across all tiers of play, and of these players with hero mains, 45% main support heroes, 30% main tank heroes, and 25% main offense/defense heroes. 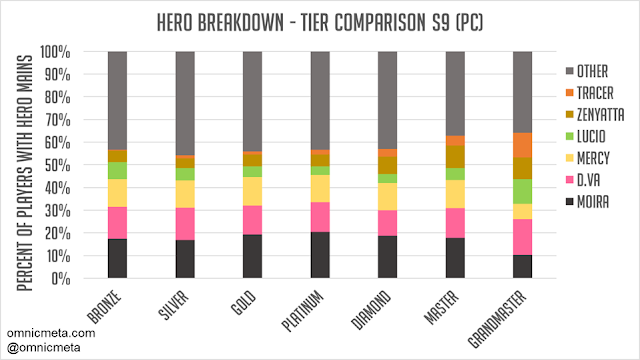 The above chart shows the relative popularity of a collection of hero mains.  The heroes selected have at least 10% popularity (out of maximum 100%) as a main in at least one tier.  There are a total of 6 heroes that meet this criteria in Season 9 - Moira, D.Va, Mercy, Lucio, Zenyatta, and Tracer (4 of 6 are support heroes).  From the chart, notice the dominance of Moira, D.Va, and Mercy mains.  Those players make up 33% to 46% of all mains, and dwarf the share of other heroes in the Top Ten. Moira in particular is incredibly popular as a main this season, with 1 in 15 competitive Overwatch players maining her - a significant increase from prior seasons.  All in all, these 6 most popular heroes to main make up 55%-65% of all mains. 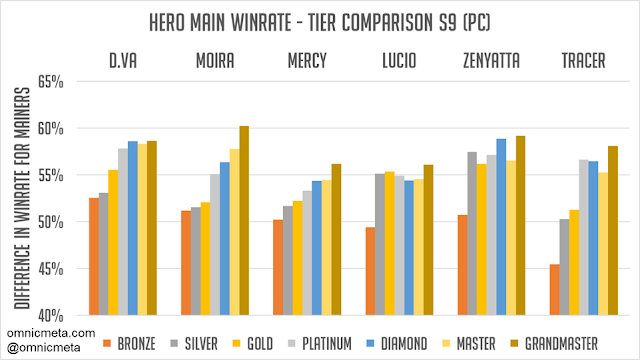 The above chart presents the average winrate for the same heroes as found in the previous chart. We know that specializing in meta heroes generally yields high winrates, and these heroes are no exception.  In this case, these heroes generally observe winrates nearly 10% higher than the tier average.  Many of the heroes approach a mind boggling 60% winrate at the higher tiers, a winrate usually reserved for niche heroes on particular maps. The players that are maining meta heroes know those heroes in and out, and these winrates correlate well with that.  Looking at the winrates themselves, Zenyatta and D.Va mains consistently  have some of the highest winrates in the game, with high tier Moiras and Tracers also approaching 60% winrates.

All in all, hero mains continue to be dominated by Support and Tank Meta heroes - and players the specialize in these heroes are being rewarded with very high winrates.