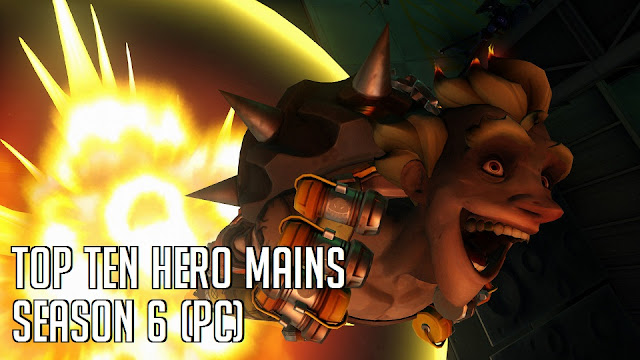 The biggest decision that Overwatch competitive ladder players have to make is which hero to play. Knowing the meta game and which heroes fit well is the big determining factor when it comes to deciding which hero to play. In this article, we analyze the popularity of hero mains. A player has a "main" hero when that player plays more than 50% of all games with that hero. Using the data for hero usage collected in Season 6 for PC (After the 1.14 "Junkrat/Roadhog" Patch), we break down the most popular hero mains for each tier. 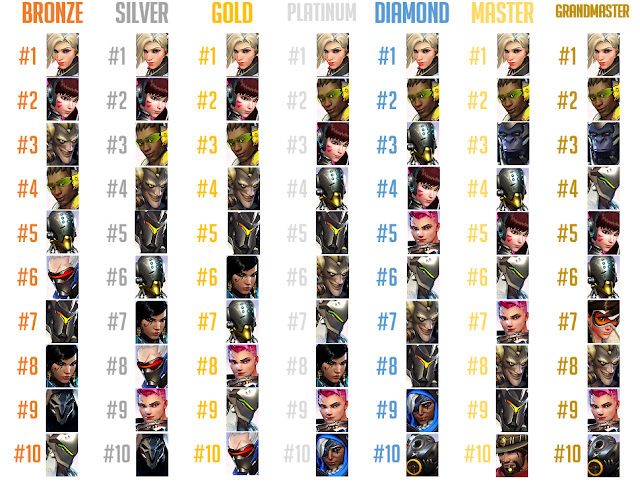 The figure above ranks the top 10 most popular hero mains in Season 6. Due to their popularity, these heroes are perceived to be the strongest in the game at each respective tier and can generally fit into most competitive ladder team compositions (these heroes are meta heroes). Overall, we see some big differences between the Hero Usage Meta Report and hero main popularity. Instead of many heroes competing for top usage, we find that only a handful of heroes are very popular to main at each tier, with the rest of the Top Ten list not being near as popular. In other words, the top heroes to main at each tier are considered the most solid picks when considering a main.

Mercy continues to absolutely dominate as a popular hero to main, with 22% to 32% of all players who have a main choosing Mercy.  With the huge buffs in Patch 1.15, its not surprising that her popularity has actually grown more since Season 5.  Generally, people are finding Mercy on their team in every single match - and that is completely reflected in her popularity as a hero to main.  Lucio and D.Va also continue to be very popular as the #2 and #3 heroes to main.  Lucio's healing, speedboosting, booping, and even DPS ability as an off-support hero is greatly appreciated regardless of tier, while D.Va's rework towards a DPS off-tank hero in 1.15 has helped her maintain her place in the meta.

The biggest change from Season 5 to Season 6 hero mains?  The incredible jump of Junkrat.  Junkrat mains really only were found in Bronze last season, and as many players are sure to have recognized, Junkrat mains are everywhere this season.  In fact, the data shows that, depending on the tier, there is a 10%-20% chance that you have a Junkrat main playing on your team right now.  Needless to say, he is very strong right now, with some of the highest winrates in the game and a huge impact overall.

DPS heroes in general are not being mained at a high rate - which reflects the general trend that players have an increasingly wide selection of heroes to choose from.  No longer are their any dominant DPS heroes - and are much more map and situation dependent.   The only real exceptions to the Season 6 Top Ten list are Genji and Junkrat.

There are some very interesting trends in Season 6 compare with Season 5's Top Ten hero mains. First, Soldier has nearly completely fallen off of the top ten list.  Way back in Season 4, he could and was played in nearly every situation and was one of the most popular heroes to main, while now Soldier is merely a hero in a DPS players pool.  Similarly, Winston was incredibly popular to main back in Season 5, but as the popularity of dive team compositions has fallen off, so has his play.  The lone exception has been Master and Grandmaster tiers, who still recognize the great impact that Winston can have on the game.  Finally, in the past Ana mains were everywhere, but now no longer.  In the community at large, one of the most frustrating questions support players are asking themselves right now is "Why play Ana, when you can play Mercy?" 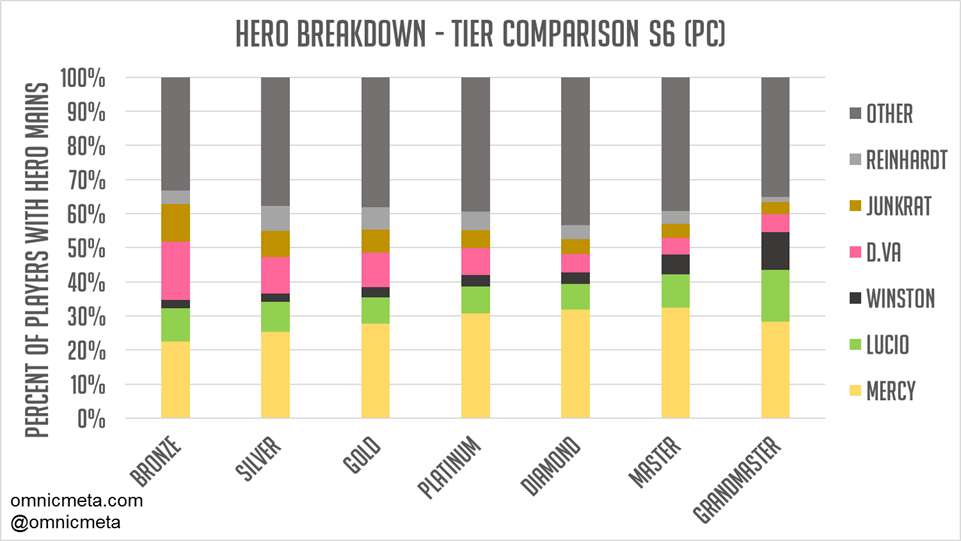 The above chart shows the relative popularity of a collection of hero mains.  The heroes selected have at least 7% popularity (out of maximum 100%) as a main in at least one tier.  There are a total of 6 heroes that meet this criteria in Season 6.  From the chart, notice the dominance of Mercy mains.  Those players make up 22% to 32% of all mains, and dwarf the share of any other hero in the Top Ten. Only in Bronze (D.Va) and Grandmaster (Lucio) is any other hero even remotely popular compared to Mercy.  Currently, nearly 1 in 12 competitive Overwatch players are Mercy mains - a significant increase from Season 5.  Other popular heroes generally only have 7% to 9% popularity as a hero main.  All in all, these 6 most popular heroes to main make up 55%-65% of all mains. 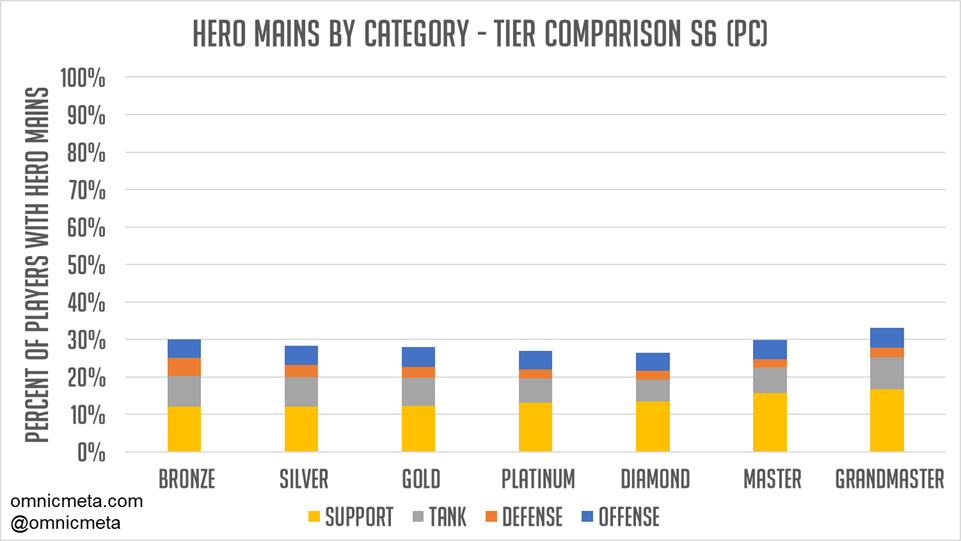 The above chart demonstrates the prevalence of hero mains in Season 6, breaking them down into hero categories.  Depending on the tier, 26% to 33% of all Overwatch players have a hero main, which is roughly the same as Season 5.  Tanks and Supports  continue to make up the majority of hero mains, between  67% to 76% depending on the tier.  The support category continues to be the most popular category to main - and has actually grown in popularity - with 40% to 53% share of all players with hero mains.  Without a doubt, this share is completely dominated by super-popular Mercy, though Lucio and Zenyatta also have some popularity as well.  Tanks make 22% to 27% of all hero mains, with D.Va, Reinhardt, and Zarya making up most of that share.  Reinhardt and Zarya we nearly non-existent in Season 5, and this season have emerged as viable and popular heroes in the Season 6 meta.  Junkrat mains dominates the Defense category as expected, while there is no single Offensive hero that stands out across the tiers - Genji at the high tiers, Pharah at the middle tiers, and Soldier at the low tiers. 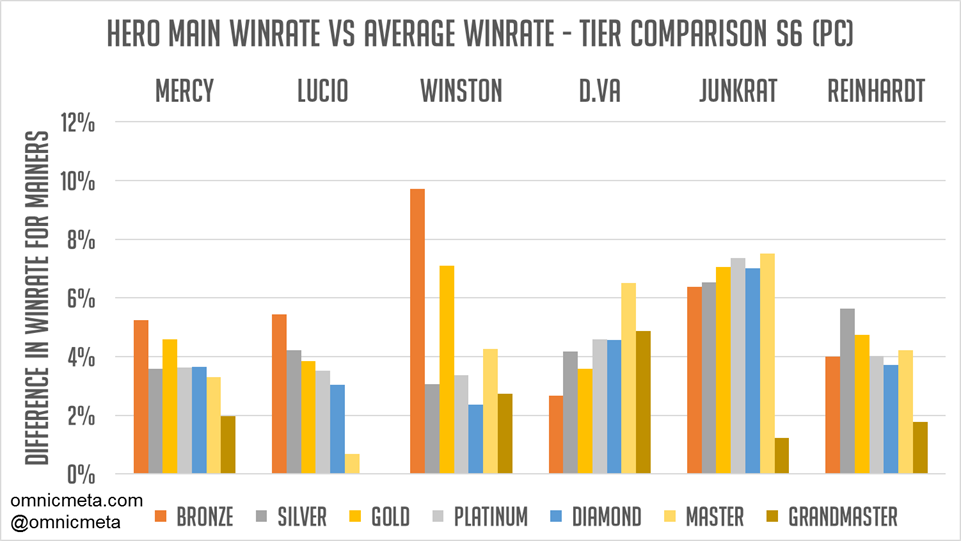 The above chart presents the difference between the average winrate for the hero main and the average winrate for the tier, using the same heroes as found in the second chart. Note that we are comparing the hero main winrates with the general winrate for the tier.  We know that specializing in meta heroes generally yields high winrates, and these heroes are no exception.  In this case, these heroes generally observe winrates 2% to 10% higher than the tier average.  The players that are maining meta heroes know those heroes in and out, and these winrates correlate well with that.  Without a doubt, Junkrat is *the* hero this season when it comes to winrates, and Junkrat mains are averaging +6% higher winrates across all the tiers.  His buffs in Patch 1.14 have really turned him into one of the highest impact heroes in the game.  Note that the other popular hero mains average around +4% higher winrates than their tier averages.  Mercy in particular has changed quite a bit with Patch 1.15 - whereas in Season 5 maining Mercy didn't provide a winrate advantage - that has clearly changed.  Players that main Mercy are now seeing higher winrates that players that only occasionally play Mercy - which may point to the idea that her skill ceiling has been increased.

All in all, Season 6 has seen some big changes to hero mains - and Mercy and Junkrat appear to be the biggest winners.