The biggest decision that Overwatch competitive ladder players have to make is which hero to play. Knowing the meta game and which heroes fit well is the big determining factor when it comes to deciding which hero to play. In this article, we analyze the popularity of hero mains. A player has a "main" hero when that player plays more than 50% of all games with that hero. Using the data for hero usage collected in Season 5 for PC (After the 1.12 "Roadhog" Patch), we break down the most popular hero mains for each tier. 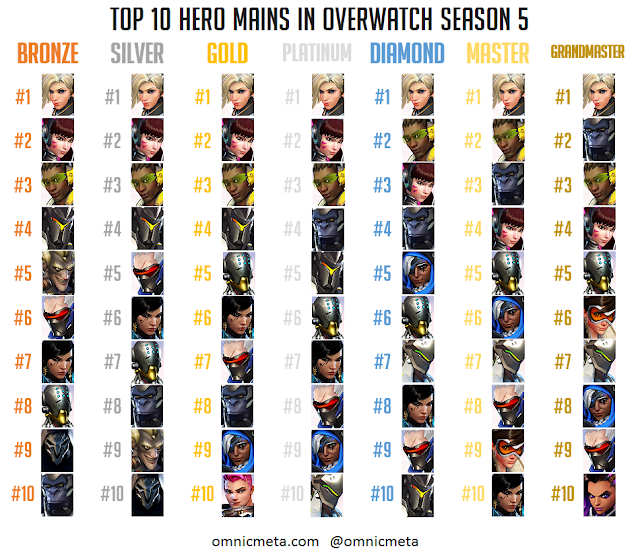 The figure above ranks the top 10 most popular hero mains in Season 5. Due to their popularity, these heroes are perceived to be the strongest in the game at each respective tier and can generally fit into most competitive ladder team compositions (these heroes are meta heroes). Overall, we see some big differences between the Hero Usage Meta Report and hero main popularity. Instead of many heroes competing for top usage, we find that typically four heroes are very popular to main at each tier, with the #5-#10 not being near as popular. In other words, the top four heroes to main at each tier are considered the most solid picks when considering a main.

Starting at the top, the most popular hero to main on PC across all the tiers - Mercy.  Her popularity as a potential hero main remains unparalleled, oftentimes 2x-3x the popularity of any other hero.  The Overwatch community at large recognizes the strengths of Mercy: highest consistent single-target healing in the game, high mobility through Guardian Angel, fast health regeneration for survivability, and invincibility during Resurrect, to name a few.  While some players may argue over her skill cap, it is undeniable how popular she is as an Overwatch hero.

The next tier of heroes occupy positions #2, #3, and #4.  For tiers Bronze -> Gold, D.Va, Lucio, and Reinhardt fill those slots, while tiers Platinum -> Grandmaster have D.Va, Lucio, and Winston.  While D.Va has long has been a darling at lower tiers, the strength of Defense Matrix and her mobility makes her also perfect for the aggressive and dive team compositions being played at higher tiers.  At higher tiers especially, Winston fits well into dive team compositions, leveraging high mobility with his jumppack, and survivability with his barrier shield.  For players with not-so-strong mechanical skill, his Tesla Cannon weapon is easy to be effective with.  While Reinhardt doesn't fit into aggressive team compositions (like those preferred at higher tiers), his game impact potential is unparalleled in control-style compositions (think 2-2-2, triple tank, etc).  Reinhardt's shield is arguably the best in the game for protecting his team and his ultimate one of the most impactful if landed on an unsuspecting team.  Similar to Mercy, Lucio has been a staple hero for a long time at all tiers, as he is the only hero that can provide speed boost for his team and consistent aura healing.  Considering that he also fits into nearly every team composition, he remains a popular hero to main for players of all skill tiers.

For the remaining herors, we see a few hero trends emerge.  High-skill floor Offense heroes Genji and Tracer at the high tiers due to their high damage and mobility, making them great picks for popular team compositions.  Pharah and Soldier are the more traditional DPS picks, strongly played and in the meta (though Pharah isn't as popular at Master and Grandmaster).  Rounding out Offense heroes, recent buffs have made Reaper much more viable and popular, and more players at Bronze and Silver are choosing him as a main in Season 5.  For supports,  Zen and Ana are both meta picks - Zen at all tiers and Ana at higher tiers.  Zenyatta has shifted from a niche pick to a meta pick in Season 5 - his harmony and discord orbs, coupled with a strong defensive ultimate ability help him fit into a number of team compositions.  Ana remains a high skill hero, with a strong utility kit.  Her  ability to shut down the opposing team using Biotic Grenade and sleep dart remain incredibly valuable.

Finally, there are also a few niche heroes that make appearances on the list.  The appearance of traditional niche pick Junkrat in Bronze (#5) and Silver (#9) may be suprising to some.  Junkrat's ability to make an impact on the game at low tiers (compared with other heroes) is relatively high.  Even more surprising is the #10 pick at Grandmaster - Sombra.  She is a very high skill ceiling utility hero that can be impactful in the right situations and hands. 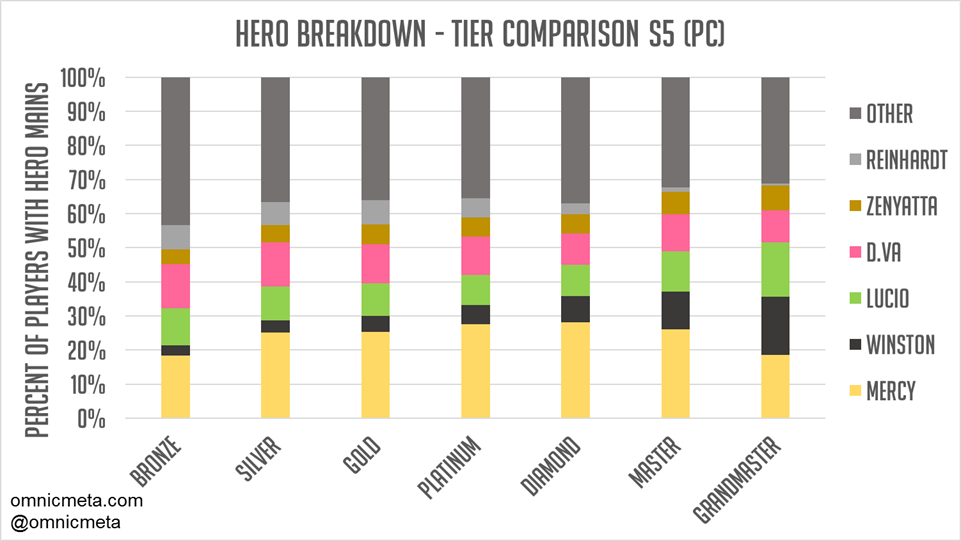 The above chart shows the relative popularity of a collection of hero mains.  The heroes selected have at least 7% popularity (out of maximum 100%) as a main in at least one tier.  There are a total of 6 heroes that meet this criteria in Season 5.  From the chart, notice the dominance of Mercy mains.  Those players make up 18% to 27% of all mains, in most cases 2x to 3x the share of others in the Top 5.  Grandmaster is the only tier where other heroes (Winston and Lucio) are just as popular to main as Mercy.  In other words, nearly 1 in 15 competitive Overwatch players are Mercy mains.  Excluding Grandmaster tier, other popular hero mains such as Lucio, Rein, D.Va, and Winston only peak at 13% popularity depending on the tier, with the popularity of other hero mains quickly falling off to a few percent.  All in all, these 6 most popular heroes to main make up 60%-70% of all mains. 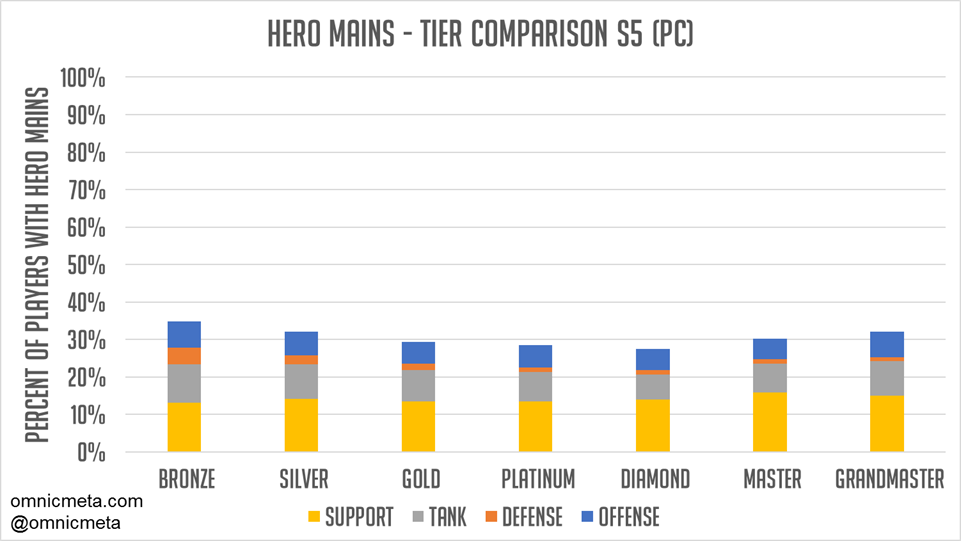 The above chart demonstrates the prevalence of hero mains in Season 5, breaking them down into hero categories.  Depending on the tier, 27% to 35% of all Overwatch players have a hero main, a slight increase of 2%-5% from Season 4.  Tanks and Supports together make up the majority of hero mains roughly 70% to 75% on average.  By far, the most popular role to main is Support, with 35% to 50% of all hero mains on average. It seems that players are attempting to exploit the "must-pick" meta heroes like Mercy and Lucio.  The second most popular role are Tanks at 25% to 30% of all mains, revolving mostly around the popularity of D.Va, Reinhardt, and Winston.  Offense hero mains are less popular, at around 20% of all hero mains on average.  There are no single hero that stands out in the Offense category.  With the long exception of Bronze tier, Defense hero mains are not popular at all, with most tiers being less than 5%. 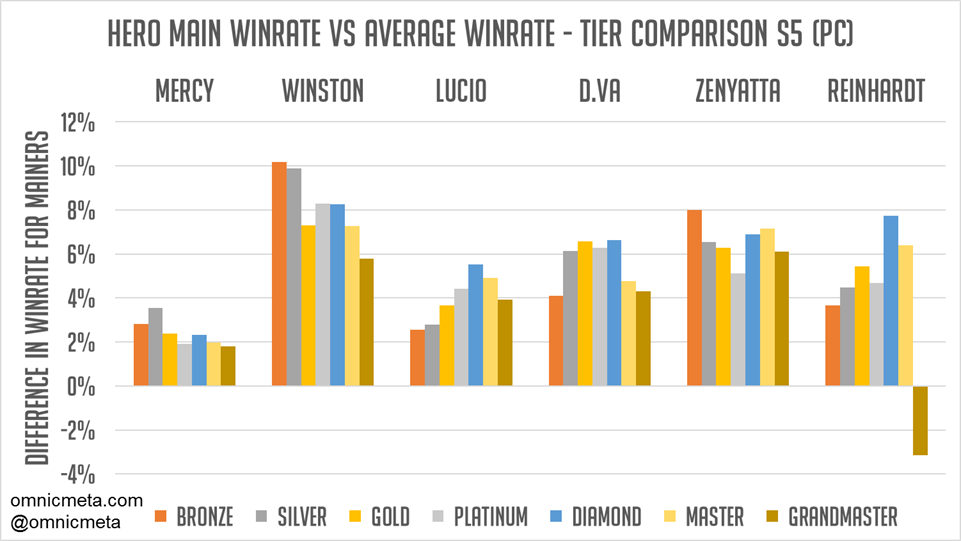 There are a few different ways to present winrates.  The above chart presents the difference between the average winrate for the hero main and the average winrate for the tier, using the same heroes as found in the second chart. Note that we are comparing the hero main winrates with the general winrate for the tier.  We know that specializing in meta heroes generally yields high winrates, and these heroes are no exception.  In this case, these heroes generally observe winrates 2% to 10% higher than the tier average.  The players that are maining meta heroes know those heroes in and out, and these winrates correlate well with that.  Winston is a particular standout, having incredibly high winrates across the board, and especially at the Bronze and Silver tiers.  Zenyatta also has a significantly high winrate across the tiers.  Mercy, however is an interesting hero.  Meta hero picks in general have higher winrates, but in this case being a Mercy main doesn't appear to benefit you much over players that don't main Mercy.  The other surprising find from the data is Reinhardt's lower winrate at Grandmaster.  Dive (in particular Winston and D.Va) are incredibly popular right now at Grandmaster in particular, where he is much less viable.