The biggest decision that Overwatch competitive ladder players have to make is which hero to play. Knowing the meta game and which heroes fit well is the big determining factor when it comes to deciding which hero to play. In this article, we analyze the popularity of hero mains. A player has a "main" hero when that player plays more than 50% of all games with that hero. Using the data for hero usage collected in Season 4 for PC, we break down the most popular hero mains for each tier. 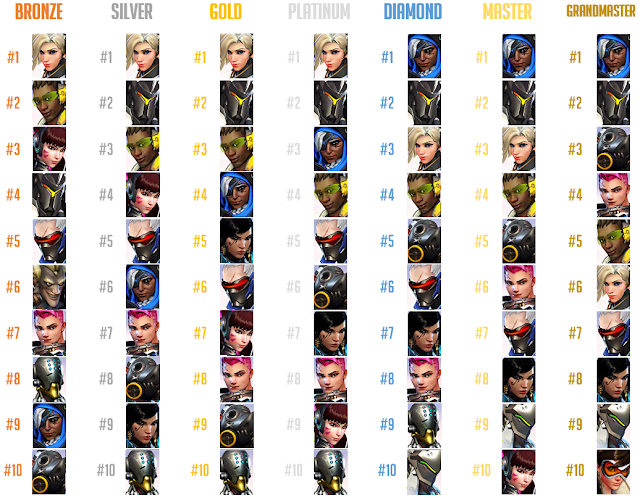 The figure above ranks the top 10 most popular hero mains this season. Due to their popularity, these heroes are perceived to be the strongest in the game at each respective tier and can generally fit into most competitive ladder team compositions. Overall, we see some big differences between the Hero Usage Meta Report and hero main popularity. Instead of many heroes competing for top usage, we find that typically two heroes are extremely popular to main at each tier, with the #3-#10 not being near as popular. In other words, the top two heroes (exception: only #1 at Bronze) to main at each tier are considered the most solid picks when considering a main. (Note: that the raw hero main popularity data is found at the end of this report in the appendix.)

The most popular heroes to main (heads and tails above other heroes) are Ana, Mercy, and Reinhardt. Ana is most popular at Diamond through Grandmaster tiers, and there she is incredibly popular as a main. Ana at Grandmaster is a real outlier representing 32% of all Grandmaster mains; in practice that means that 1 in 10 Grandmasters is an Ana main. She is definitely at high skill hero;  her kit is supremely good at shutting down the opposing team while having the highest heal rate in the game to keep your team alive. At lower tiers, Mercy is definitely meta and fits into nearly all team compositions. She is one of the strongest healers in Overwatch, and her resurrect ultimate ability is incredibly strong at most tiers. Reinhardt is the only "main tank" currently in the game and central to many team compositions due to his huge shield, while having an ultimate ability which can stun and combo with many other heroes.

The other heroes currently being mained consistently across tiers are Lucio, Soldier:76, Pharah, Zarya, and Zenyatta. Lucio has a strong defensive ult and is the only hero offering speed boost and consistent aura healing. Soldier and Pharah are the top picks for Offensive heroes, which reflects them being played strongly in the meta. Zarya is a surprisingly popular pick at low tiers as she not nearly as popular in general hero usage. Her alternate fire and managing her projected barriers requires significant skill to be effective. Zenyatta is clearly more of a niche main but is a frequent pick for strong in dive compositions with his high DPS and discord orb.

Other heroes' popularity depends on the skill tier. Roadhog, Genji, are more preferred at high tiers due to their skill cap. Roadhog's hook / alternate fire and Genji's dash/reflect/projectiles considerable skill to use effectively. D.Va is the only hero main in the top ten that is heavily preferred at lower tiers of play. Even with the recent nerfs, her ability to stay alive while harassing and protecting make her a solid pick. Tracer and Junkrat make brief appearances; Junkrat is a surprise at Bronze, being the #6 most popular main this season. 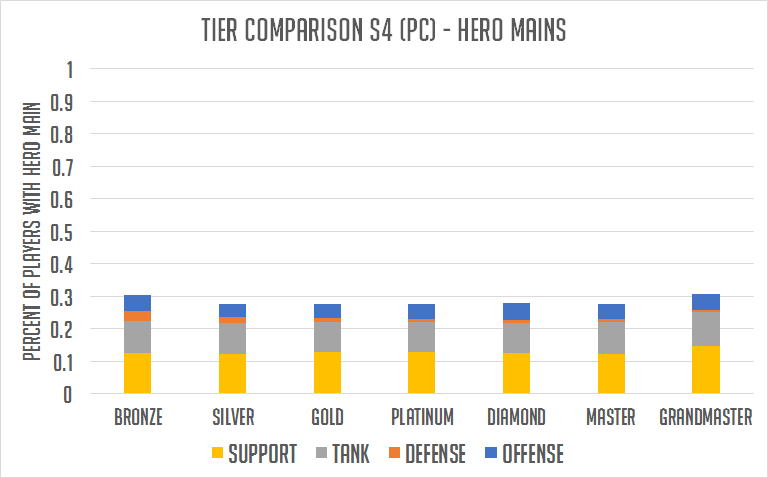 The above chart breaks down the prevalence of hero mains by tier and by hero category. Roughly 30% of all players have a "main", a hero played more that 50% of the time in Season 4. Of these players that are hero mains, 45% are support mains and 35% are Tank mains on average. This means that a meager 20% of players that "main" heros focus on offense or defense. This likely means that more "DPS" players have a pool of heroes that they play from.


In case you'd like to see the raw data for "main" popularity (percent/share of main popularity):