The biggest decision that Overwatch competitive ladder players have to make is which hero to play. Knowing the meta game and which heroes fit well is the big determining factor when it comes to deciding which hero to play. In this article, we analyze the popularity of hero mains. A player has a "main" hero when that player plays more than 50% of all games with that hero. Using the data for hero usage collected in Season 4 for Console, we break down the most popular hero mains for each tier.

See the Top Ten Hero Mains for PC
Follow me on Twitter to keep up with my most recent articles. 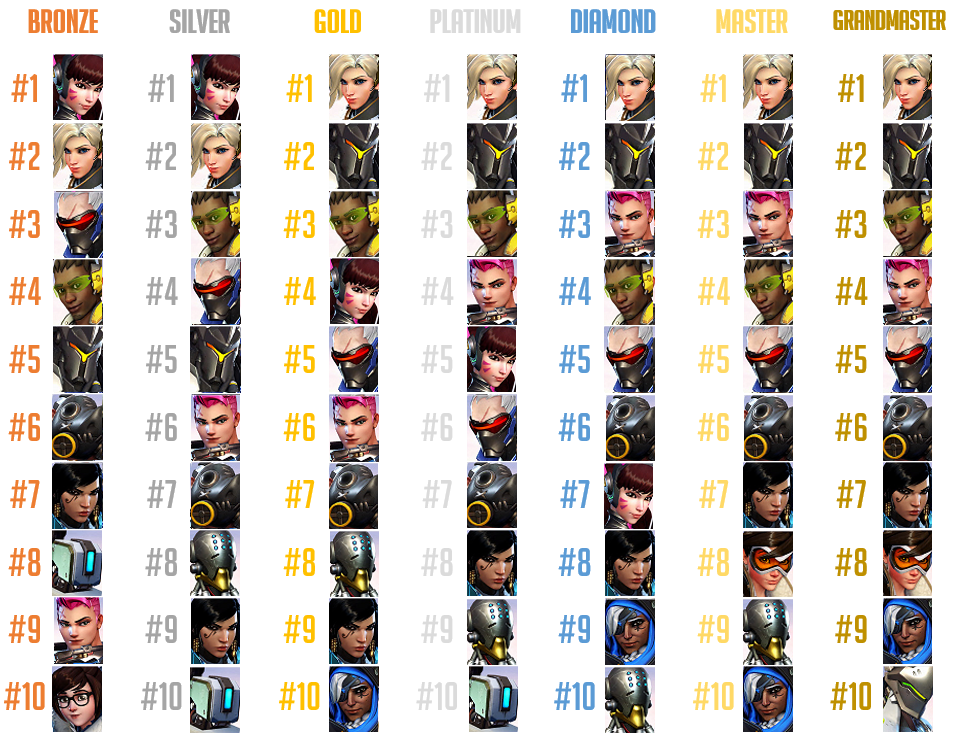 The figure above ranks the top 10 most popular hero mains this season. Due to their popularity, these heroes are perceived to be the strongest in the game at each respective tier and can generally fit into most competitive ladder team compositions. Overall, we see some big differences between the Hero Usage Meta Report and hero main popularity. Instead of many heroes competing for top usage, we find that typically two heroes are extremely popular to main at each tier, with the #3-#10 not being near as popular. In other words, the top two heroes (exception: only #1 at Bronze) to main at each tier are considered the most solid picks when considering a main. (Note: that the raw hero main popularity data is found at the end of this report in the appendix.)

The most popular heroes to main (heads and tails above other heroes) are D.Va, Mercy, and Reinhardt. Ana is most popular at Diamond through Grandmaster tiers, and there she is incredibly popular as a main. Mercy mains are extremely popular at all tiers, representing 27% of all mains at Grandmaster, 29% at Master, and 23% at Diamond. In practice that means that 1 in 15 Grandmasters and Masters players are Mercy mains. She is the strongest healer on Console, can effectively pocket incredibly strong DPS heroes such as Pharah (Mercy's damage boost is also strong), and her resurrect ultimately ability has become even more strong with her recent invincibility buff. Reinhardt is the only "main tank" currently in the game and central to many team compositions due to his huge shield, while having an ultimate ability which can stun and combo with many other heroes. At lower tiers, D.va effectively replaces Reinhardt as the most popular tank hero. Her  high health pool, ult and damage eating Defense Matrix, boost ability for harassing and retreating, and the ability to de-mech and re-mech make her a solid pick.

The other heroes currently being mained consistently across tiers are Lucio, Soldier:76, Pharah, Roadhog, Zarya, and Zenyatta. Lucio has a strong defensive ult and is the only hero offering speed boost and consistent aura healing. Soldier and Pharah are the top picks for Offensive heroes, which reflects them being played strongly in the meta. Zarya is a surprisingly popular pick at low tiers as she not nearly as popular in general hero usage. Her alternate fire and managing her projected barriers requires significant skill to be effective. Roadhog is an incredibly strong hero highly dependent on skill; his hook and right-click alternate fire can kill most heroes in the game provided accurate aim. However, his right click is very effective in close quarters against high-health heroes (e.g. tanks) and requires less dependence on aim. Zenyatta is clearly more of a niche main but is a frequent pick for strong in dive compositions with his high DPS and discord orb.

Other heroes' popularity depends on the skill tier. Tracer and Ana are more preferred at high tiers due to their skill cap. Tracer's glass cannon kit requires precise management and positioning for blinks, recall, and pulse bombs. Ana is definitely at high skill hero; while she technically has the highest heal rate in the game and the ability to shut down enemy ultimates with sleep dart, her kit requires precise aim. Genji's dash/reflect/projectiles considerable skill to use effectively. Bastion makes the top ten at lower tiers. His reworked kit is a substantial improvement overall, but his presence in the top ten is likely due to the overpowered nature of the Ironclad passive that was recently nerfed. Mei barely makes the top ten at Bronze.

The above chart breaks down the prevalence of hero mains by tier and by hero category. Roughly 25% of all players have a "main", a hero played more that 50% of the time in Season 4. Of these players that are hero mains, 40% are support mains and 35% are Tank mains on average. This means that a meager 25% of players that "main" heroes focus on offense or defense. This likely means that more "DPS" players have a pool of heroes that they play from.


In case you'd like to see the raw data for "main" popularity (percent/share of main popularity): 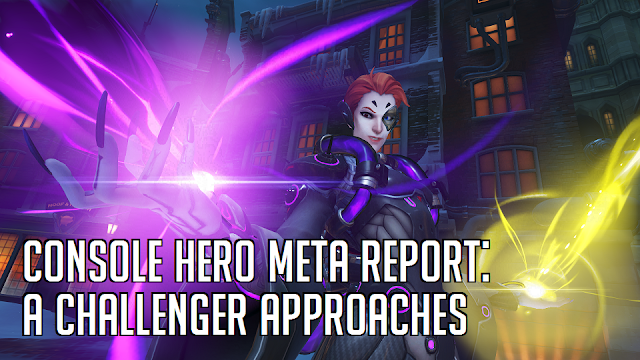 Moira has cemented her place in Overwatch - and has become one of the most played heroes on Console.  Moira has shown herself to be a utility support that can either play as off-support or even as a main healer.  She has become a favorite hero in the broader Overwatch community - a fun hero to play, and sometimes frustrating to play against.  As always I hope you enjoy this meta report!
- Switch

Since her release in competitive, Moira has surged to become one of the most played heroes in Overwatch on Console.   In most tiers she is near 40% to 45% usage, while even at Grandmaster she is being selected 1 out of 3 matches.  Just like on PC, Moira has experienced the biggest initial impact on in the meta of any new hero in Overwatch.  Moira's kit is well rounded and quite suitable for fill a variety of support roles.

The above infographic presents the top two heroes gaining the most usage since the last report.  Two heroes immediately stand out: Ana and D.Va.  With the introduction of Moira and the nerf to Mercy, Ana has seen a boost in play stemming from the buff to her weapon damage.  With whispers of aim assist coming for healing allies, Ana is in a much better place today - and may see more console viability in the future.  D.Va is seeing an +4% average increase across all tiers, with a higher increase at the highest tiers (12% at Grandmaster).  With such heavy Moira play, D.Va is being used to counter Biotic Damage Orb - using defense matrix to absorb them.  Other honorable mentions are Orisa and Roadhog, both up +2% usage on average across the tiers.

With Moira and Ana adding quite a bit of competition, the 100% pick rate of Mercy is over.  Mercy remains an incredibly strong hero and played at a 50% to 70% rate, showing that the Mercy meta isn't quite over yet.  Similar to PC, Zenyatta is the other hero most significantly affected by the introduction of Moira.  He is down -5% on average across the tiers, and is now around 20% usage in most of the tiers.  Honorable mentions for biggest losers this report are Lucio (competition from Moira) and Zarya (competition from Roadhog and Orisa) - both down more than -3% in play on average. 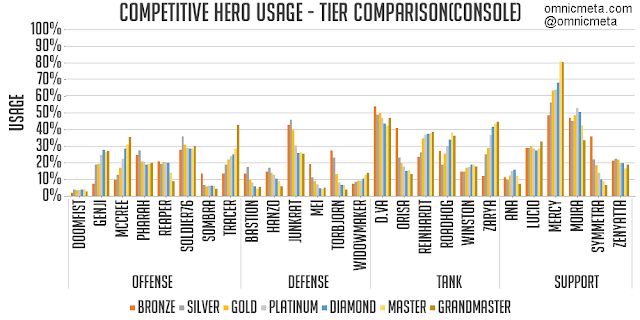 With the introduction of Moira and changes to Mercy and Ana, the meta has shifted towards diverse hero play.  There are at least 3-4 heroes in each category (DPS, Tank, Support) that are currently viable in today's meta.  In general, its a great time to be playing competitive Overwatch.

The biggest topic in today's meta is how much the support meta has changed.  Moira's introduction has changed the face of competitive Overwatch.  She's being played in nearly 1/2 of all team comps right now across all tiers of play.  Perhaps most surprising is that she is replacing Mercy as main healer frequently in tiers Bronze -> Diamond.  However, her role as an off-support is even more important.  When paired with Mercy, Moira and provide high burst healing to keep tanks and squishes alive during teamfights.  Players across all tiers are choosing her fairly frequently instead of Lucio and Zen.  Overall, Moira is being seen as a fun hero to play by the community, and her support playstyle seems quite well suited for console play compared to other support heroes such as Ana.

Mercy has seen the biggest drop in play, though she is still the most popular hero in all of console Overwatch.  The nerf to her Resurrect ability has made her slightly weaker, though her healing and Valkyrie ultimate remain unchanged.  She is being played quite a bit less at lower tiers of play, signaling that Moira is frequently played as main healer at those tiers.  Note that while Ana has seen a big increase in play, she still hasn't cracked 15% usage in most tiers.  She is still dumpster tier for console players and hard to utilize - though we can expect that to change when Ana aim assist for healing allies reaches live servers.

The two most popular tanks for Console right now are D.Va and Zarya.  D.Va has become an even more important part of the meta with her ability to eat Moira's damage orbs with Defense Matrix.  She's currently being played at a near 50% rate across all tiers of play.  Zarya continues to be incredibly popular at the higher tiers - approaching 50% usage.  Both D.Va and Zarya are true utility tanks that can be played in a variety of situations, with Defense Matrix and Projected Barrier being strong abilities against heroes like Junkrat and Pharah in the current meta.  Roadhog and Reinhardt round out the most heavily played tanks currently the tank meta.  After falling greatly during the dive team composition meta and after the hook combo nerf, both Reinhardt and Roadhog continue to grow in popularity.  Roadhog in particular is finding renewed use as players continue to appreciate the improved Take a Breather.

The Offense meta has been shifting somewhat, though it continues to be diverse.  The main constants at each tier continue to be Junkrat and Soldier.  Junkrat's winrates continue to be be incredibly high, as his recent buffs has made him one of the strongest DPS heroes in the game.  Soldier continues to be a reliable staple of competitive, with his ability to deal hitscan damage, sprint, and self heal.  At the higher tiers, McCree, Genji, and Tracer as also popular.  Those heroes are very mechanically demanding, and can provide a lot of damage for highly skilled players.  For the lower tiers, Pharah and Reaper are the other go to DPS heroes.  With lots of tanks and Junkrats being played, both heroes effectively provide a good counter.  One of the more interesting data points this report is that fewer players overall are choosing to play DPS, and instead are playing support.  In fact, DPS play is down more than 15% on average - and we can thank the introduction of Moira for that.  Out of all the DPS heroes, Genji (-3%), Pharah (-2%), Junkrat (-2%), and McCree (-2%) are all down the most on average. 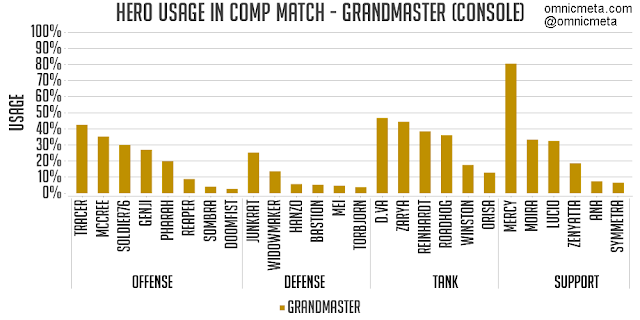 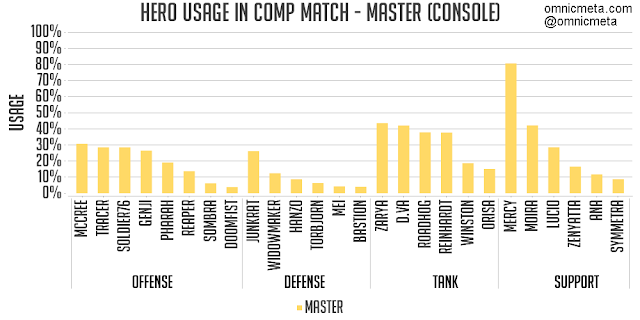 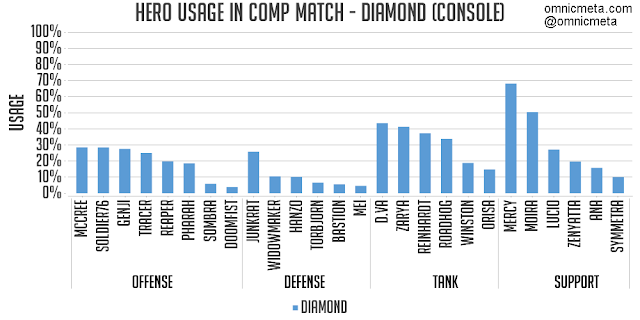 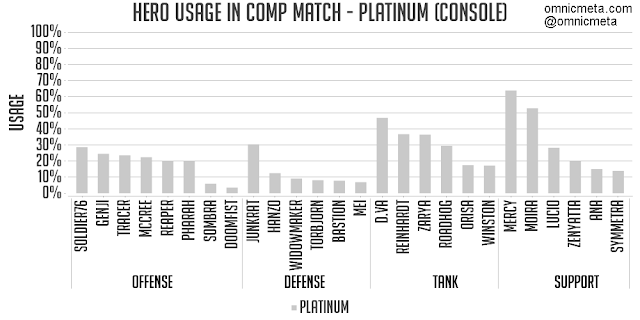 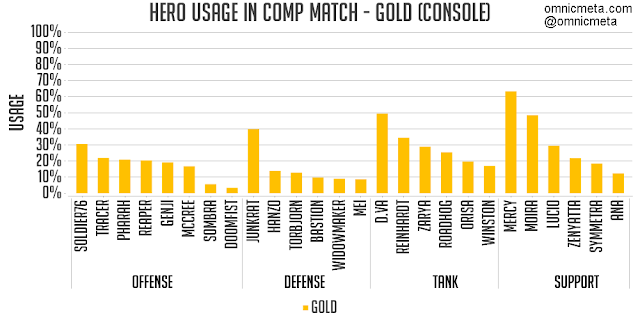 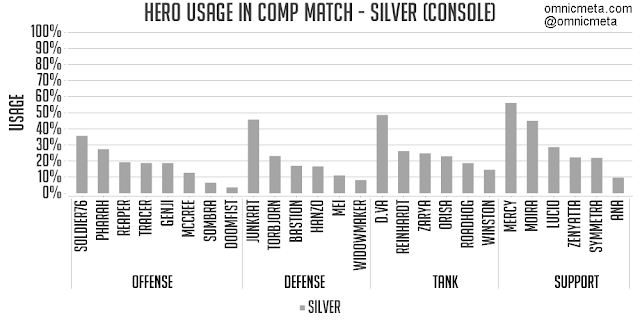 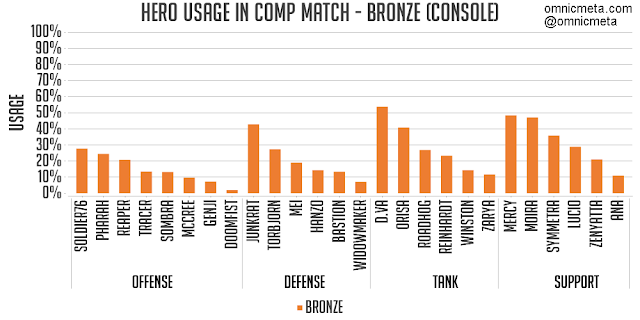