Top One Tricks for Season 4 (Console)

One-trick Overwatch players represent one of the most contentious topics in competitive Overwatch.  There seem to be frequent posts online about the why one-tricking is a bad idea, or about the general disdain for certain one-trick heroes.  The general thought is that these players can't be flexible enough to contribute well to the team, especially given the worry of getting two similar one-tricks on the same team (say two Mercy one-tricks).  However, the strength of specializing in a hero is becoming an expert, and as it turns out the vast majority of one-tricks are meta heroes.

In this article, we analyze the popularity of one-trick heroes for Console.  A player has a "one-trick" hero when that player plays more than 80% of all games with that hero.  We think that 80% is a fair cutoff for one-tricks, as many famous PC one-trickers are below that (Valkia: 77% Pharah, Kephrii: 66% Widowmaker).  Using the data for hero usage collected in Season 4 for Console, we break down the most popular hero one-tricks for each tier. 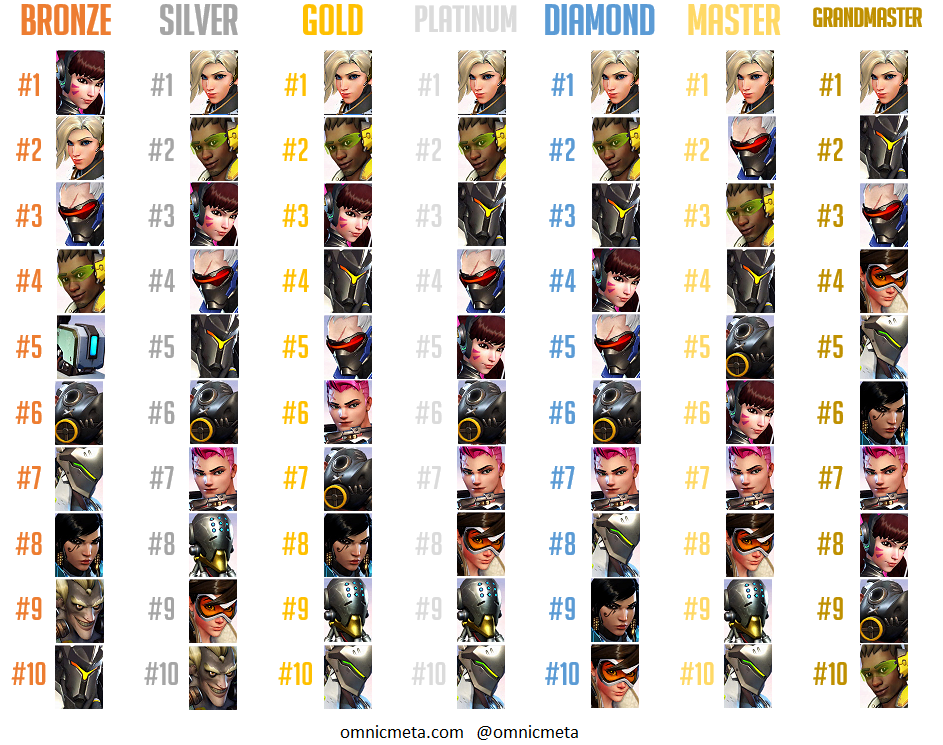 The figure above ranks the top 10 most popular hero one-tricks on Console in Season 4.  Generally speaking we find that meta picks dominate this list, with the exception of Bastion and Junkrat at Bronze and Silver, where arguably he is part of the meta.  We also notice a few other interesting pieces of data. Mercy is the most popular hero to in every tier except Bronze (D.Va), and as we show in the next chart her popularity as a one trip dominates all other Overwatch heroes at higher tiers. Note the heavy presence of presence of tanks (4 of 6) and offense (3/4 of 7) heroes. The meta for one trick players is clearly slanted towards tank and flanker/dive heroes on console. 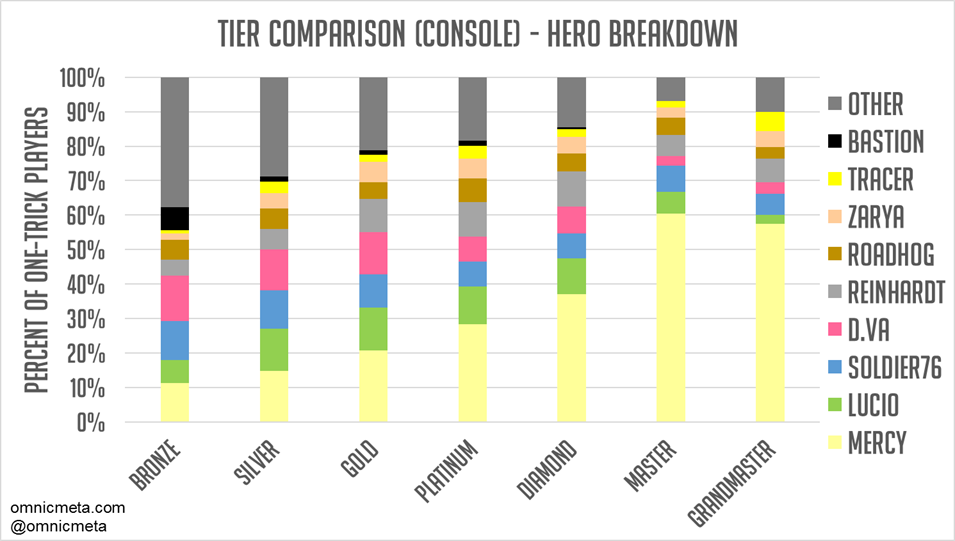 The above chart the relative popularity of a collection of one-trick heroes. The heroes selected have at least 5% popularity (out of maximum 100%) as a one trick in at least one tier. There are a total of 9 heroes that meet this criteria in Season 4. The first piece of data that pops out is the popularity of Mercy one tricks at Master and Grandmaster tiers, making up 60% and 57% of all one trick heroes respectively.  Between tiers Platinum-> Grandmaster, no other hero has nearly the same amount of one-trick popularity as Mercy.  Considering that 10% of all players on Console meet the 80% one trick criteria, a shocking 1 in 17 players to 1 in 35 players are mercy one tricks.  Other popular heroes, such as D.Va, Soldier, Lucio, and Reinhardt only attain a 10% to 13% share of one-trick popularity, depending on the tier.  As shown in the chart, popularity quickly falls off for other heroes to only a few percent. 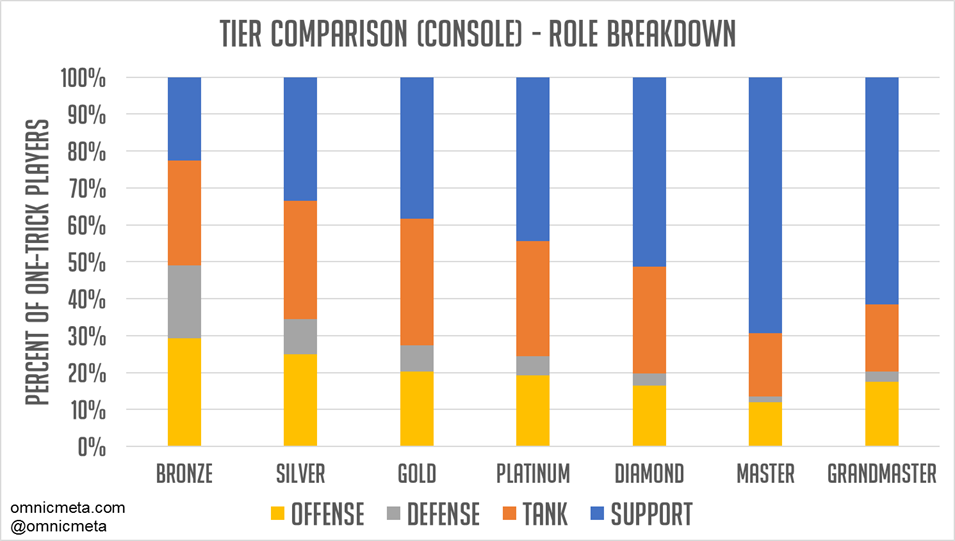 The chart above shows the prevalence of one-tricks by role.  The chart demonstrates, one tricking support heroes becomes increasingly popular at higher tiers.  In other words, having mastery of support heroes is deemed incredibly valuable at higher tiers.  At Diamond -> Grandmaster, more than 50% of all one tricks are playing support heroes (the majority of them Mercy).  The second most popular role are tanks, revolving mostly around the of Reinhardt as a one trick hero. Across tiers Gold -> Grandmaster, tank and support roles make up more than 70% of all one trick players.  At lower tiers, defense and offense heroes are more popular to one-tricks, with Soldier, Bastion and Junkrat being the most popular heroes in those roles. 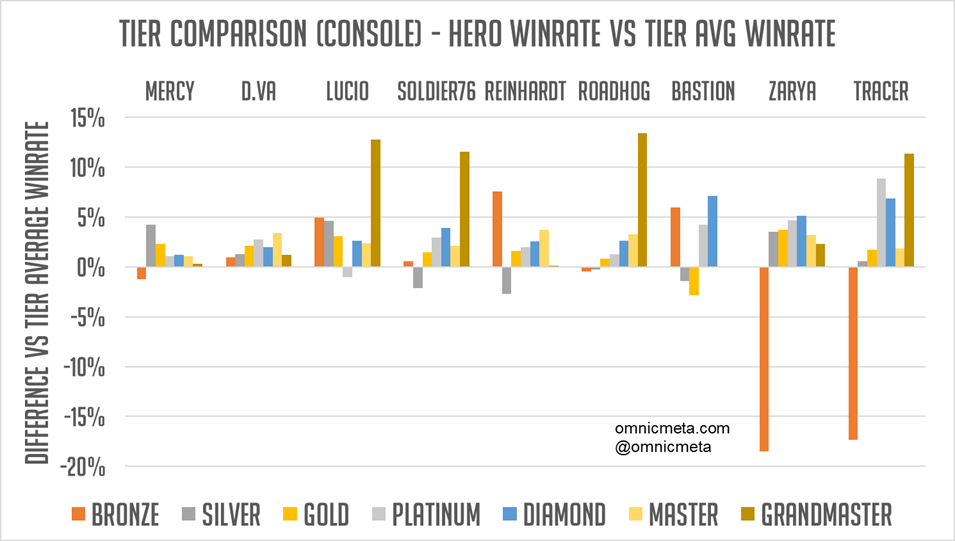 The above chart presents the difference between the average winrate for the one-trick hero and the average winrate for the tier, using the same heroes as found in the second chart. Note that we are comparing the one trick winrates with the general winrate for the tier. We know that specializing in meta heroes generally yields high winrates, and these heroes are no exception. Depending on the tier,  these heroes have winrates that are 2% to more than 10% higher than tier average. The players that are one-tricking meta heroes know those heroes in and out, and these winrates correlate well with that.  There are a few heroes worth highlighting: Zarya and Lucio has consistently higher winrates regardless of the tier, while Tracer appears to be a standout at most tiers boasting up to 12% better winrate.  The biggest suprises are winrates at Grandmaster and Bronze, with Bronze players really not being able to one trick Zarya or Tracer well, but Grandmaster players having great success with Lucio, Soldier, and Roadhog.

One-trick players make up about 10% of all competitive Overwatch players on Console, and this season Mercy has been the go to hero by far, especially at high tiers of play. She makes up roughly 1 in 25 of all competitive Overwatch players on Consoleat the moment. One trick players have generally had better winrates this season, which great news for those wanting to climb ladder. Finally, meta heroes make up the vast majority of all one-tricks and there are very few niche heroes being played..