One-trick Overwatch players represent one of the most contentious topics in competitive Overwatch. There seem to be frequent posts online about the why one-tricking is a bad idea, or about the general disdain for certain one-trick heroes. The general thought is that these players can't be flexible enough to contribute well to the team, especially given the worry of getting two similar one-tricks on the same team (say two Mercy one-tricks). However, the strength of specializing in a hero is becoming an expert, and as it turns out the vast majority of one-tricks are meta heroes.

In this article, we analyze the popularity of one-trick heroes for PC. A player has a "one-trick" hero when that player plays more than 80% of all games with that hero. We think that 80% is a fair cutoff for one-tricks, as many famous one-trickers are below that (Valkia: 77% Pharah, Kephrii: 66% Widowmaker). Using the data for hero usage collected in Season 4 for PC, we break down the most popular hero one-tricks for each tier. 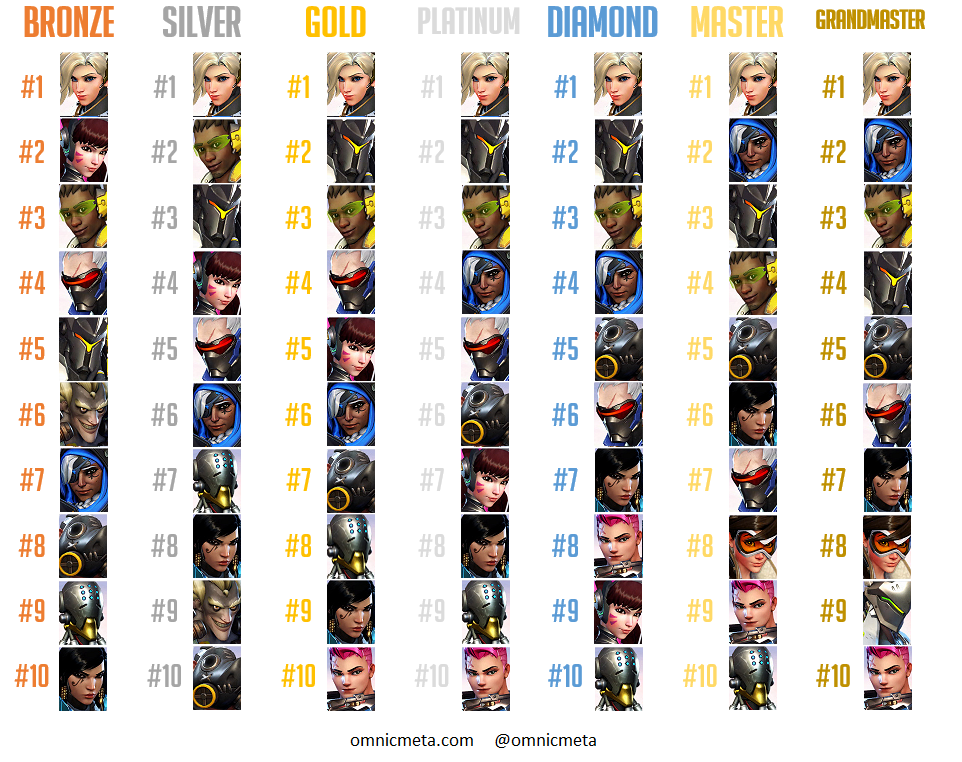 The figure above ranks the top 10 most popular hero one-tricks on PC in Season 4. Generally speaking we find that meta picks dominate this list, and the only niche hero Junkrat makes the top 10 for Bronze and Silver, where arguably he is part of the meta. We also notice a few other interesting pieces of data. Mercy is the most popular hero to one-trick regardless of tier, and as we show in a later chart, her popularity as a one-trick hero dwarfs all other Overwatch heroes. Another interesting tidbit is that support heroes in tiers Platinum -> Grandmaster make up 3 of the top 4 spots, which is another trend that we also will explore in a following chart. 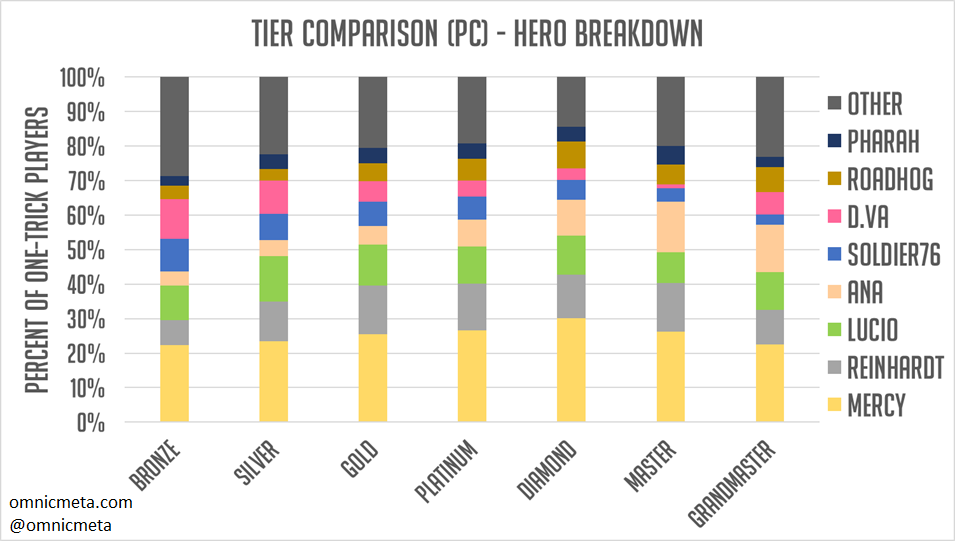 The above chart the relative popularity of a collection of one-trick heroes. The heroes selected have at least 5% popularity (out of maximum 100%) as a one trick in at least one tier. There are a total of 8 heroes that meet this criteria in Season 4. From the chart, notice the dominance of Mercy one-tricks. Those players make up 23% to 30% of all one-tricks, some 2x to 3x the share of others in the Top 5. The prevalence of one-tricks as a whole has increased in Season 4, with an average of 10% of all competitive mode players on PC being one-tricks. In other words, nearly 1 in 35 competitive Overwatch players are Mercy one-tricks. Other popular one-trick heroes such as Lucio, Rein, D.Va, and Ana only peak at 13% popularity depending on the tier, with the popularity of other one-trick heroes quickly falling off to a few percent. 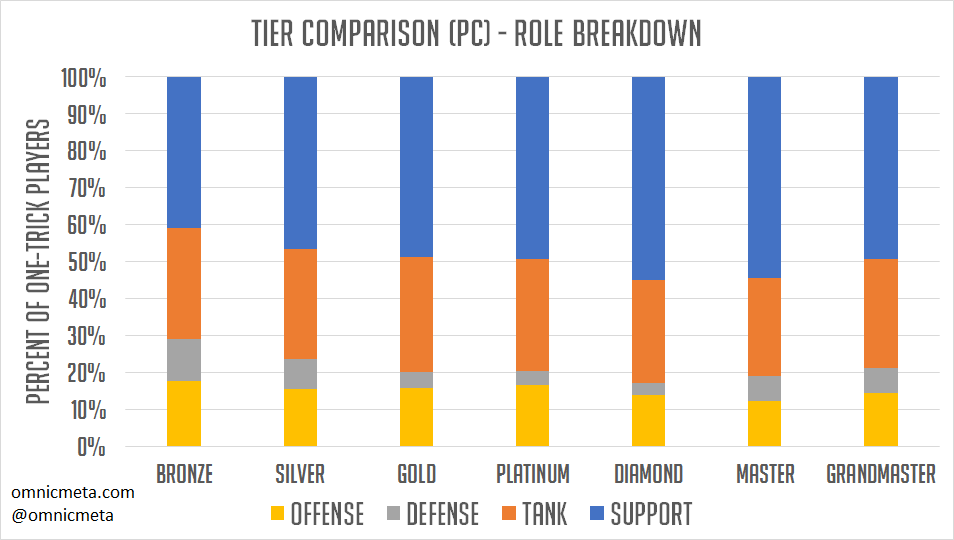 The chart above shows the prevalence of one-tricks by role. By far, the most popular role to one-trick is support, with around 50% of all one-tricks on average. It seems that players are attempting to exploit the "must-pick" meta heroes Mercy, Ana, and Lucio. The second most popular role are tanks, revolving mostly around the popularity of Reinhardt as a one trick hero. Tanks and supports make up 71% to 83% of all one-trick heroes on average, with very few players choosing to one-trick offense or defense heroes. 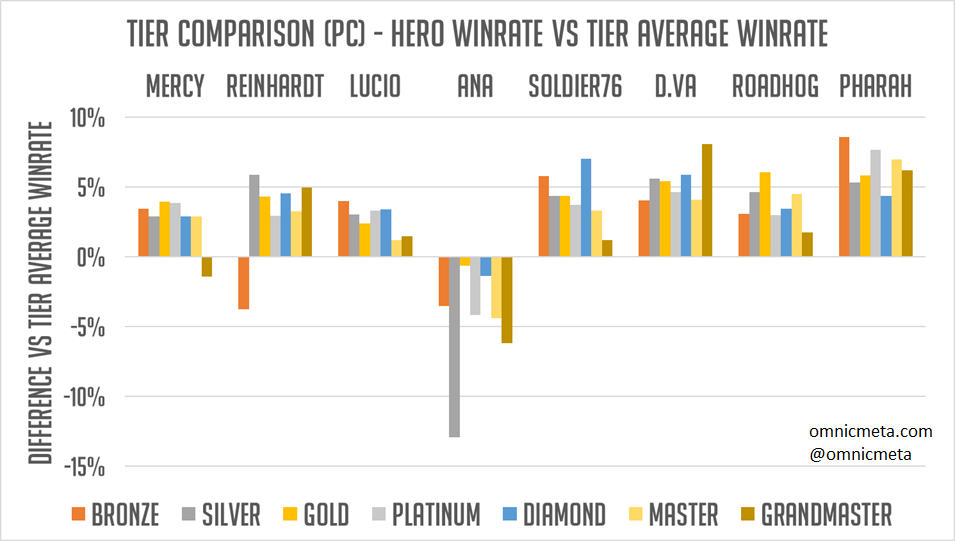 There are a few different ways to present winrates. The above chart presents the difference between the average winrate for the one-trick hero and the average winrate for the tier, using the same heroes as found in the second chart. Note that we are comparing the one trick winrates with the general winrate for the tier. We know that specializing in meta heroes generally yields high winrates, and these heroes are no exception. In this case, these heroes generally observe winrates 3% to 9% higher than the tier average. The players that are one-tricking meta heroes know those heroes in and out, and these winrates correlate well with that. Pharah is a particular standout, having high winrates across all tiers. The biggest surprise are Ana winrates which are significantly lower than tier averages. It may very well be that the meta of aggressive and flank-heavy team compositions have not been kind to her this Season.

One-trick players make up about 10% of all competitive Overwatch players on PC, and this season Mercy has been the go to hero by far. She makes up roughly 1 in 35 of all competitive Overwatch players on PC at the moment. One trick players have had great success with winning matches this season, with the exception of Ana players, where the meta in Season 4 appears to not have been kind to her. The good news for many players is that meta heroes make up the vast majority of all one-tricks, and there are very few niche heroes being played.