Should I Specialize and Main a Hero?


"Does specializing in a particular hero affect my winrate?"
"Are there certain types of heroes that are better to specialize in?"

These are tough questions, especially great to consider as many people online have strong opinions about "mains" and "one-tricks". Using our dataset, we try to find out using winrates whether it's a good idea to focus on a hero or not.
We first define what a "main" and "one-trick" player are, and then look at the prior two weeks of competitive play data for PC. We determine each player's most played hero and compare the number of matches played on that hero against their total matches played to figure out which category a particular player is in. We then keep track of winrates for each category across tiers of play (Bronze -> Grandmaster) in order to figure out if focusing on a hero is a good idea or not.

There are three types of players that we identify.

1. One-tricks:   Players that have a favorite hero that they play for more than 80% of all matches.

3. Generalists:   Players that don't appear to have a strong preference for a particular hero (No hero played more than 50% of all matches). 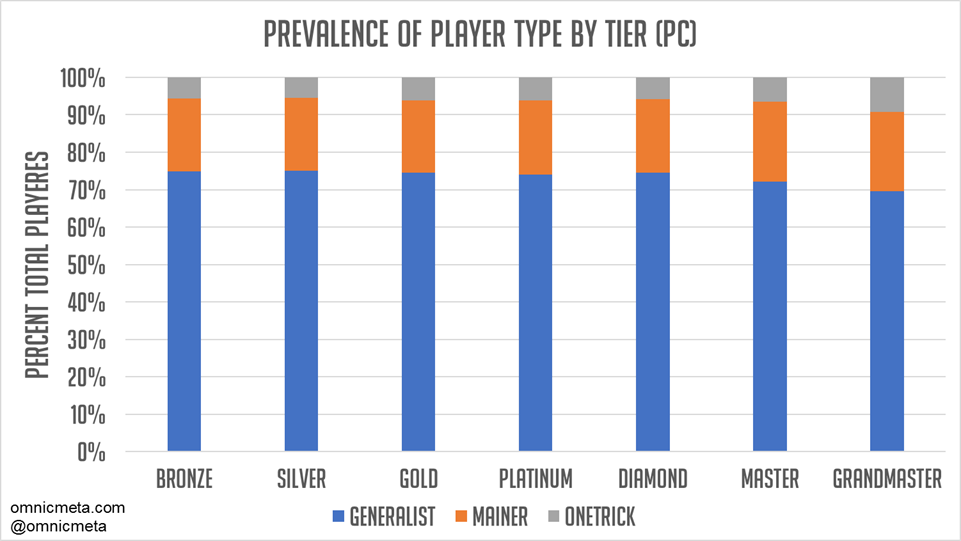 The chart above shows the breakdown on players into categories by tier. As expected, there are very few "One-tricks" (6% on average) and also few "Mainers" (20% on average). This means that the vast majority of players do not focus on a single hero when they play (74% on average). Note that there is an increase in "One-tricks" and "Mainers" at Masters and Grandmaster tiers - this is likely due to these players being highly skilled which enables them to focus on a single hero and still be able to effectively contribute in most matches. 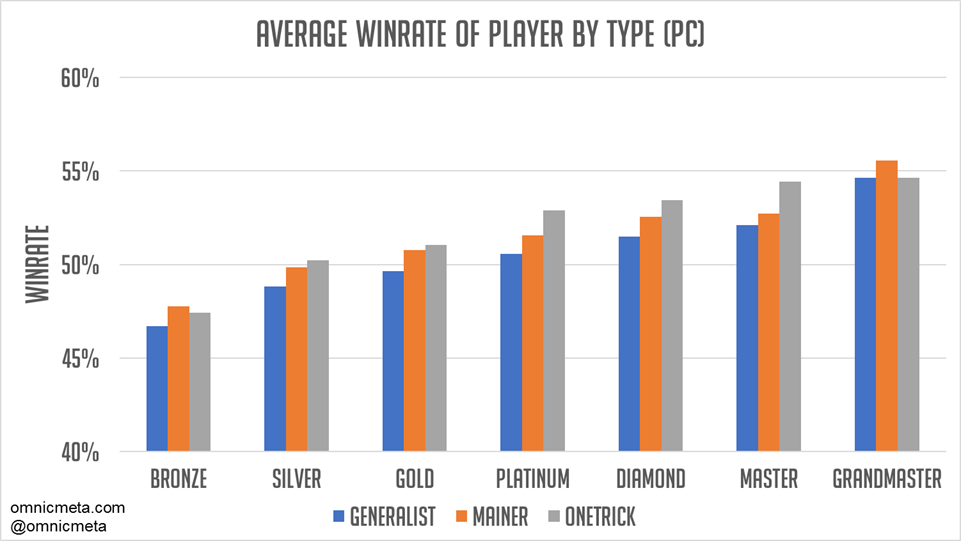 The above chart presents the average winrate of players across tiers, broken down by their category. What we generally expect to see is that those players in the middle tiers (Gold / Platinum) to be close to 50% winrate, and those at the ends (Bronze / Grandmaster) to be lower and higher than 50%. These winrates essentially mean that on average, middle-tier players see SR remain roughly the same, lower-tier players see SR decreases, and higher-tier players see SR increases. In other words, the bell curve is being spread out over time.

So is it better to specialize? The data says YES. The data suggests that those that don't specialize don't win as many games. Considering how few "Mainers" and "One-tricks" that exist, it would appear that those players are the ones that are climbing. What's very telling in the Gold and Platinum Tiers, which have nearly a 50% winrate for most players (most players are Generalists), but as players specialize more and more, they win more - and likely climb SR more. Clearly, experience in a hero matters.

A Word of Caution...

1. "Great, that means I should main my favorite hero and become a one trick!". While the data strongly points to the benefits of being a one-trick, it turns out that a player can't pick any hero they like and master their way to victory. The data shows that winrates greatly vary depending on heroes that players choose.

2. Also, keep in mind that there is no "silver bullet" for playing heroes... you can't just pick a hero and expect to win. In order to win you need to be good at that hero.

3. Not being able to flex-play other classes can severely limit you. The data also says that most successful players are competent on some combination of DPS / Tanks / and Support heroes.

CAUTION: The chart below is a pure presentation of winrate data for Heroes. It is not meant to shame or praise players that prefer certain heroes. Again, please play the heroes that you want to play, all heroes are viable. 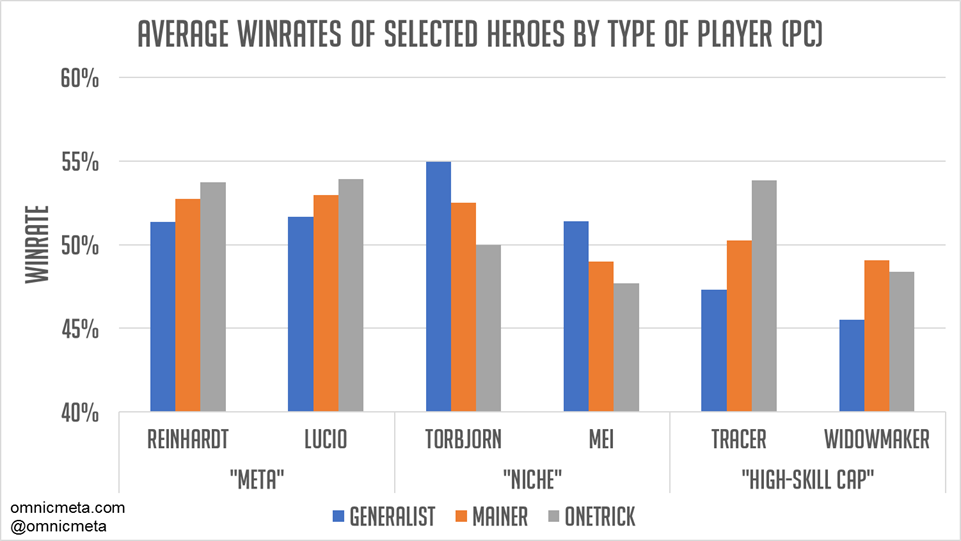 The above chart gives examples of heroes with different win rates. The winrates are averaged across all tiers of play (Bronze -> Grandmaster).

First, the "Meta" Heroes: Players of heroes like Reinhardt and Lucio benefit from focusing on those heroes, even exclusively. These heroes are incredibly popular at all tiers, and fit into most team compositions. Note that on average these heroes have above 50% winrates.

Next, the "Niche" Heroes: Most people would agree that heroes like Torbjorn and Mei are fantastic on some maps but not on others. Specializing in these heroes and playing them in the majority of matches actually leads to a huge decline in winrate. Note that one-tricks actually see sub 50% winrates in these heroes.  Simply put, playing them where they don't excel stacks the odds against you.

Finally, the "High Skill Cap" Heroes: Heroes like Tracer and Widowmaker demand many hours of practice to be successful. The data here shows <50% winrates for players that don't specialize, and >50% for those that do. Notice the staggering gain in winrate as the players focus more on the hero.

"Should I Focus on a Single Hero?"

The data clearly shows that focusing on a hero can help improve a player's winrate. Of course, picking the right hero to focus on depends a lot on personal preference. However, the best heroes to focus on are the ones that can be played on a lot of maps and fit into a lot of team compositions.

Again, keep in mind that there is no "silver bullet" for playing heroes... you can't just pick a hero and expect to win. In order to win you need to be good at that hero, and be able to fill the needs of the team (including being good at other heroes).

Winrates in general are difficult to talk about, for three main reasons:

1. Blizzard wants player's winrates to approach 50%, which would mean that Blizzard has perfectly determined the player's skill level and SR in the Elo system.
2. Winrates don't purely determine SR increases/decreases. Win/loss streaks, Performance-based SR adjustments, and hidden MMR all contribute to the fact that sometimes SR changes for a win are much different than for a loss. E.g. some players notice that wins give less SR than losses take away.
3. Hero winrates don't tell the whole story, as some characters (looking at you Symmetra), are only played on certain maps and situations - where they are incredibly strong. Such hero play deeply skews their winrates higher.