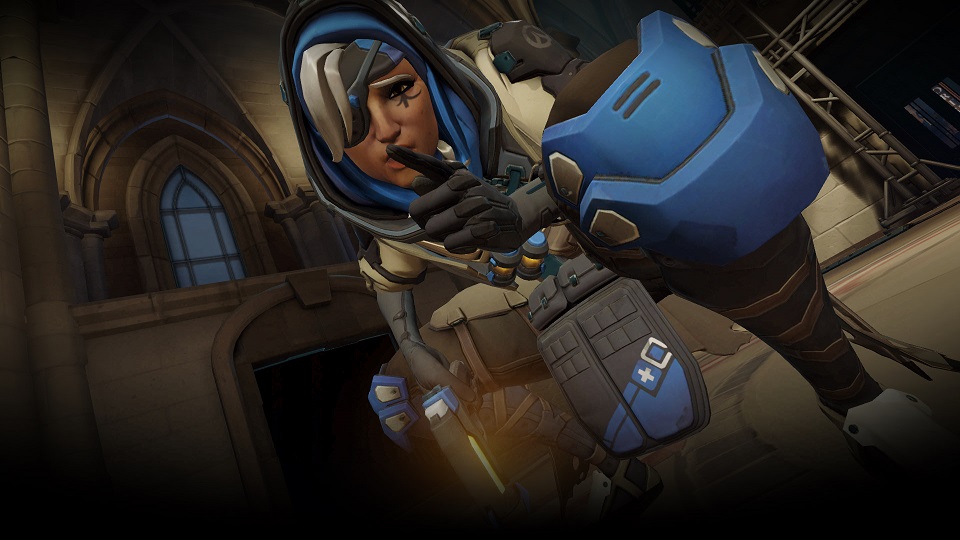 Blizzard has a very difficult job when balancing heroes in Overwatch.  Not only are their different player skill levels present in the game, but two entirely different platforms.  Console and PC are different beasts most known for having different control schemes (controller vs. mouse and keyboard).  This major difference alone can make hero preferences quite different across the platforms.  But how different is the meta between Console and PC in Season 4?

The Differences between PC and Console Competitive Ladder


For this analysis, we look at hero usage for both Console and PC competitive ladder - as of the two recent meta reports.  For simplification (and not to overwhelm with too much data), we use the average hero usage across the tiers as our dataset to compare the two platforms.  At the bottom of this article in the appendix, you can see the full data including tiers Bronze -> Grandmaster. 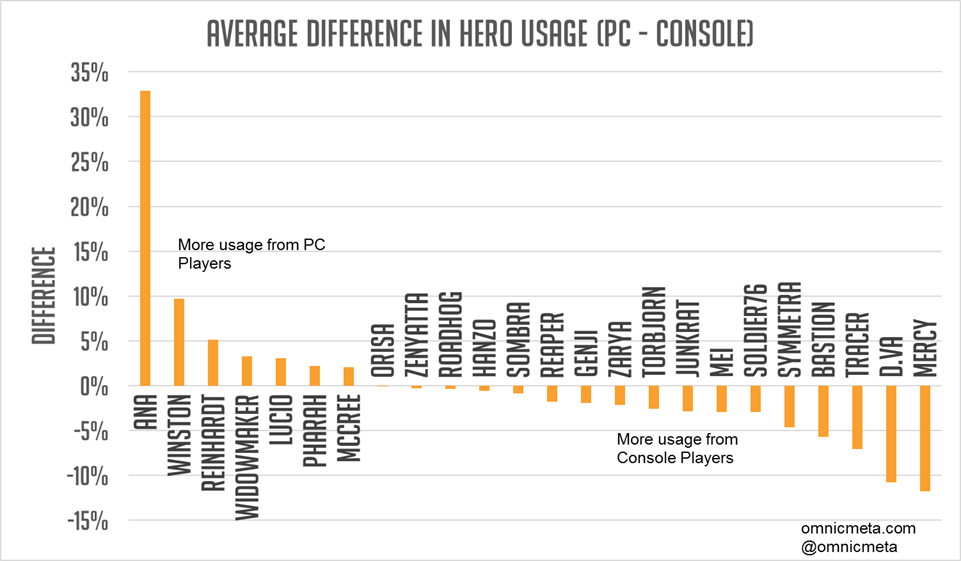 The above chart shows the difference between PC and Console competitive ladder hero usage.  Positive values mean that the hero is more popular on PC competitive ladder, while negative values mean that the hero is more popular on Console.  Immediately, we see that there are quite of few noticeable differences between the two platforms. Also, note that there are a small number of positive values, and a larger number of negative values in the chart. This gives some indication that a larger and diverse set of heroes is generally being played on Console, while the PC scene has a smaller pool of heroes that are popular.

The top 5 heroes with the biggest differences: 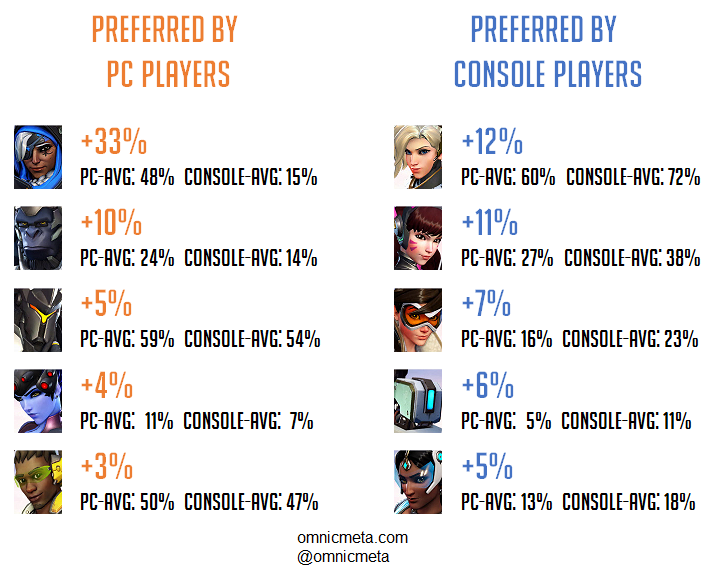 The above Figure shows the top 5 heroes that are the biggest standouts and differences between the Console and PC hero meta.

The most eye-popping difference is Ana.  She is not used hardly at all on Console, but very heavily used on PC.  As the skill tier increase, the difference between the two platforms grows, with nearly a 60% difference at Grandmaster tier.  It is undeniable that Ana's healing is highly aim-dependent, and thus a high-fidelity input (e.g. mouse) is likely to contribute to better accuracy.  On the flip side, Mercy fills the main healer role much more often on Console, with an average usage being 12% higher than on PC.  Similar to Ana, the difference in Mercy play is much larger at Grandmaster tier, with 41% more usage on Console than on PC.  To finish out key support differences, the recent and major Lucio changes appear to have made him more popular on PC, but time will tell if this will be a continuing trend.

For Tanks, Winston has become a staple in the PC scene due to the rise of dive team compositions, but has not found so much usage in the Console scene.  Despite his Tesla Cannon weapon providing area-of-effect damage and being aim-friendly, Winston is currently being played 10% more on PC than on Console.  In my discussions with console competitive ladder players, one of the most common thoughts on why Winston isn't as popular was that his jump pack is hard to aim.  Being able to accurately engage and deal damage on a jump is key to success with Winston, and not being able to consistently do that is clearly a negative.  On the flip-side, D.Va is being played 11% more on Console than on PC.  Whether she is filling Winston's shoes is not clear given the data, but the prevailing thought among console players I talked with is that D.Va's boost is easier to control compared to Winston's jump pack. Regardless, D.Va is a very popular hero on Console, and as a main tank even competes with Reinhardt for playtime.  This competition is also a likely reason why Reinhardt is being played on PC 5% more than on Console on average.

The last big differences seem to be clearly rooted around aim mechanics.  Bastion and Symmetra have been well-known names in the Console scene for a while.  Both Bastion and Symmetra are known as some of the more difficult to counter heroes on Console, mostly due to Bastion's extremely high damage output and Symmetra's "lock-on" primary weapon. Similarly, Tracer has been known as a strong hero for a long time, with her blinks making her extremely difficult to hit by opponents.  Note that all three of these heroes have "spray" or "lock-on" weapons, significantly reducing the aiming requirement for players.  For PC players, Widowmaker is a clear standout that is arguably the most aim-dependent hero in the game.

It's clear that there are major differences between the Console and PC competitive ladder hero meta, with those differences seeming to revolve around the control styles.  Aim dependent heroes appear to be consistently more popular on PC, while overall strong heroes (some that are less dependent on aim) are more popular on console.  These key differences in hero meta make for different team compositions and certainly should affect the way that Blizzard considers balancing heroes in the future.

Appendix: Difference in Hero Usage for Each Tier 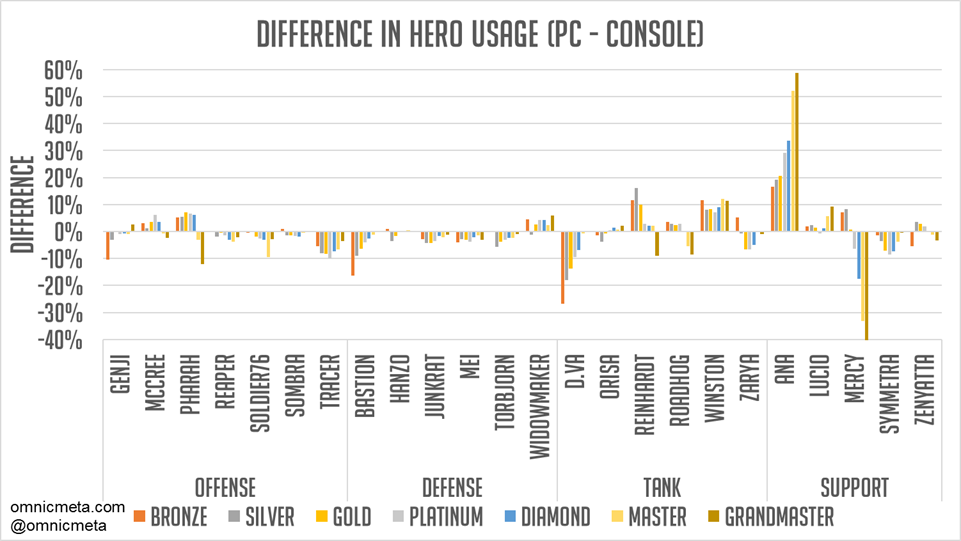