Welcome to OmnicMeta's report on the state of competitive Overwatch on PC from Season 3. In this report, we mainly look at the meta of hero usage trends across tiers from Grandmaster through Bronze.

What this report is: A report and tier list of Overwatch hero usage and player trends across competitive ladder tiers (Grandmaster -> Bronze), covering the entirety of Season 3 (all ~3 months). Players are divided into tiers by their SR at the end of the season. The above chart breaks down average usage of a hero by tier, grouped into the same categories (Offense, Defense, Tank, Support) as found in the game. Generally speaking, higher tiers prefer higher skill cap characters that can reward them for their play, while lower tiers prefer heros that are easier to learn and be productive with.

For Offense heroes, Soldier is by far the most popular choice across all competitive tiers. His kit appeals broader to all tiers, as he is relatively easy to pick up, while still have a high enough skill cap requiring great hitscan aim and positioning. Genji, McCree, and Tracer see a steady increase in usage in more competitive tiers, while Pharah and Reaper are not as popular in Master and Grandmaster as they are in the lower tiers. Tracer gets a big bump in usage between the Master and Grandmaster tiers, while Sombra sees very little play.

Defense heroes saw relatively little play overall in Season 3, with few exceptions. Junkrat is exceptionally popular at Bronze with a 34% usage rate (i.e. Junkrat is in 1 out of 3 matches), and rapidly declines as the tier increases. Mei is the only other standout worth mentioning, as she is still not very popular but maintains nearly the same level of usage across all tiers.

Tanks were the meta in Season 3, and it shows. However, which tanks where chosen completely varied depending on tier. While Reinhardt maintained similar usage across tiers, D.Va was more popular at lower tiers, while Roadhog and Zarya were more popular at higher tiers. The differences in usage for those heroes between tiers can likely be chalked up to the skill cap for the heroes. Winston saw very little play, possibly due to the huge buffs to D.Va making her a more utility tank with the ability to dive, dish, and soak damage.

Support usage rate reveal some major differences between the tiers. Ana was arguably the main catalyst for the tank meta, and at the Master and Grandmaster level she saw nearly 90% usage (was in nearly every match at those tiers). However, the data shows that she simply wasn't as popular at lower ranks; at lower ranks Mercy saw more usage. This variance in usage is likely due to the higher skill cap of Ana vs. Mercy. Speaking of Mercy, many in the community wonder about her viability at higher tiers, and the data demonstrates the she is still being played (30% at Diamond, 15% at Master, 10% at Grandmaster). Lucio and Zenyatta are also popular, but less so at the higher tiers as they give way to Ana. Symmetra remained a niche pick in S3 despite the rework. 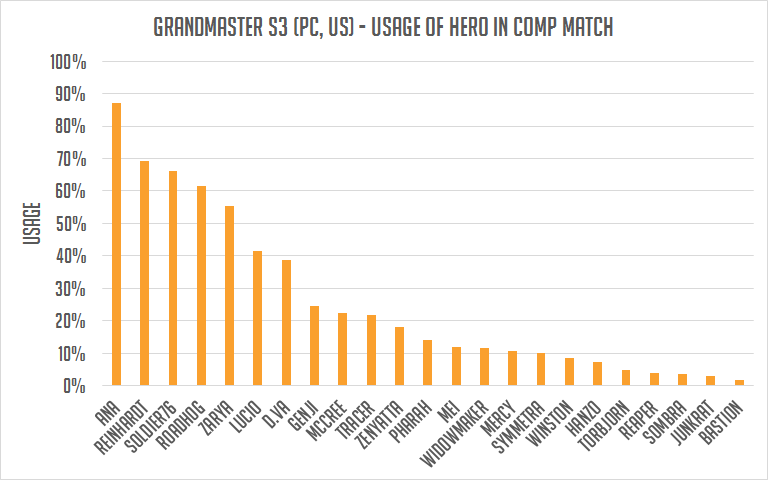 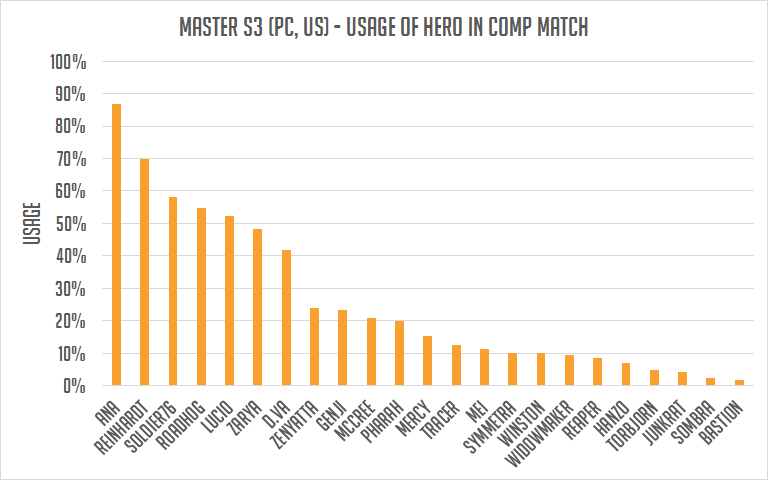 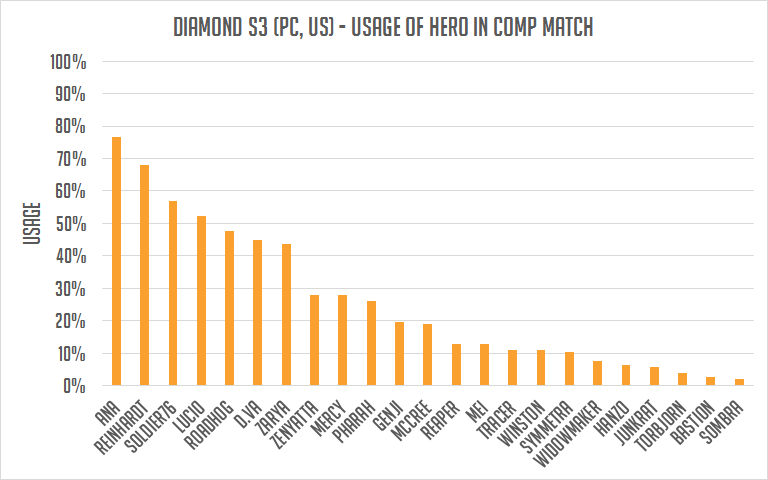 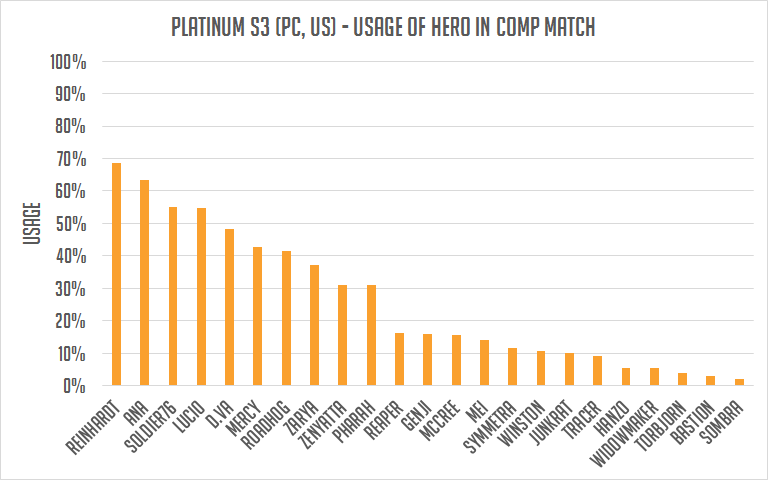 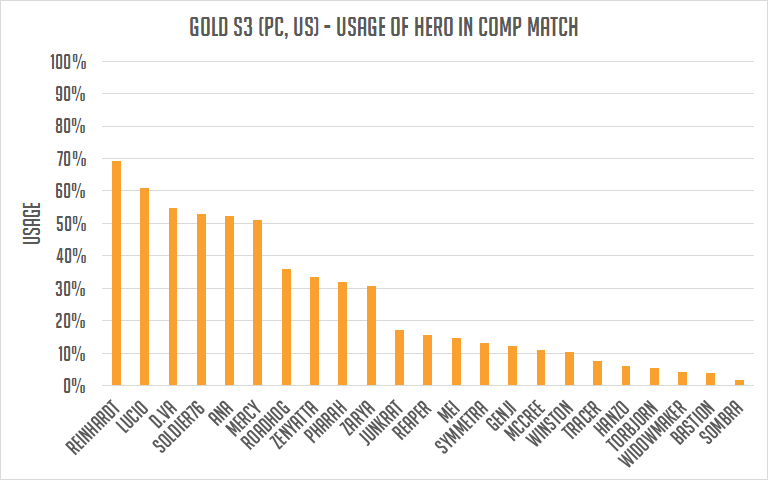 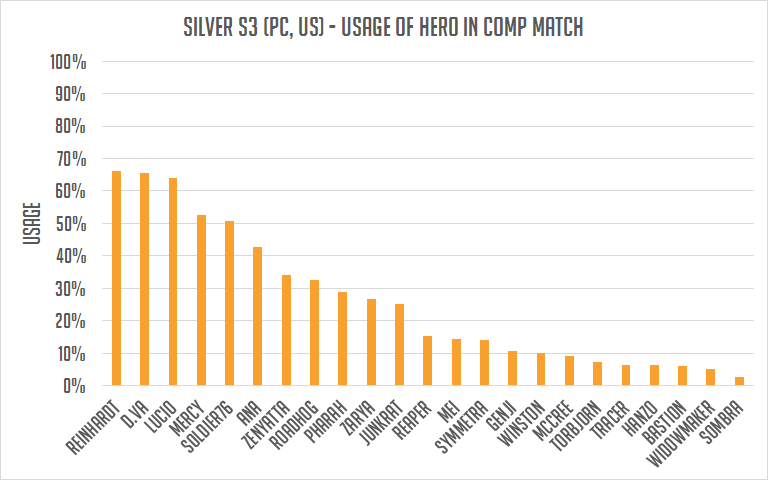 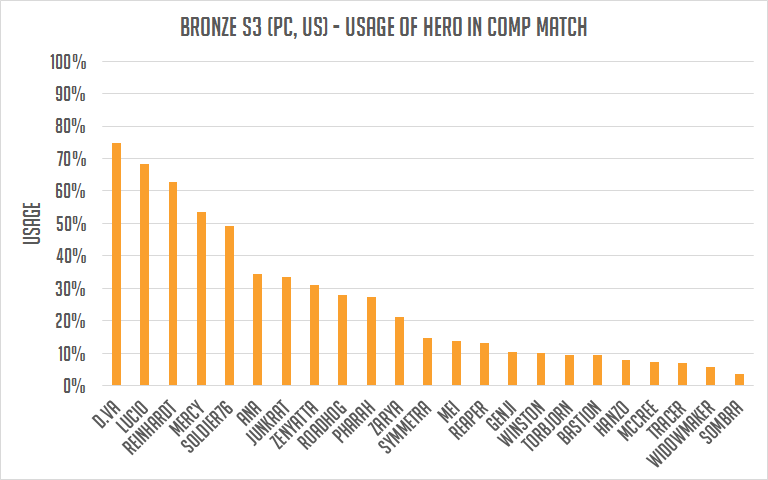