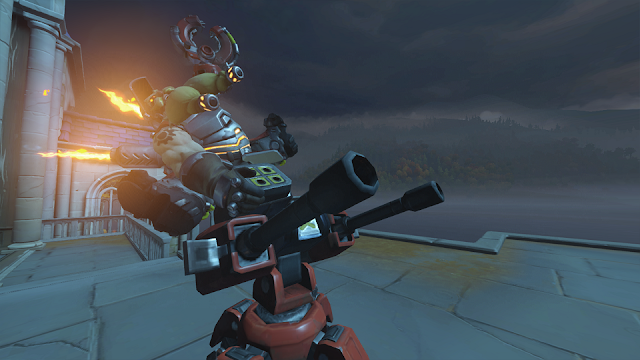 Torb's rework hit live servers with Patch 1.29 a few weeks ago.  He was held out of competitive play for 2 weeks, and one week ago finally was available for play (with less than a week of Season 12 remaining).  This article dives into how the rework has affected Torb's viability on ladder.  As always, enjoy!

Torb's rework in Patch 1.29 followed a similar pattern to past heroes.  Armor packs were removed, Torb's old ultimate was toned down and moved to a regular ability (now called "Overload"), self-deploying Turret, and a new Molten Core ultimate was added to Torb's kit.  Blizzard's goal in these changes was to change Torb's skill away from "feast or famine" mechanics that relied on acquiring resources for armor packs and trying to charge (old) ultimate Molten Core.  Check out the patch notes if you want more details.  In this article we use a week's worth of player data constituting more than 20,000 PC competitive matches for the new Torb.  (Disclaimer: While this is good data, keep in mind that it was collected during the last week to Season 12.)

The primary patch changes for Torb revolve around his offensive capability, and so we compare Torb to popular Damage heroes.  Overall,  Torb's new kit has made him a better hero and allows him to compete well with other heroes.  Across competitive tiers, Torb's eliminations per 10 minutes have increased +4%, while his damage per 10 minutes have increased +16% with the new changes. 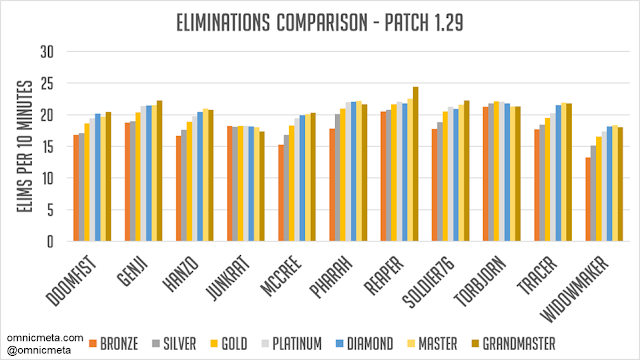 The above chart compares the eliminations per 10 minutes on the current patch. You'll notice that many of the popular Damage heroes have similar contributions.  However, for the lowest tiers, Torbjorn is now the #1 hero for eliminations. Another good sign for Torb is his final blows which have increased +15% on average with the new patch.  He now is middle of the pack among damage heroes for final blows, and near the top for eliminations. 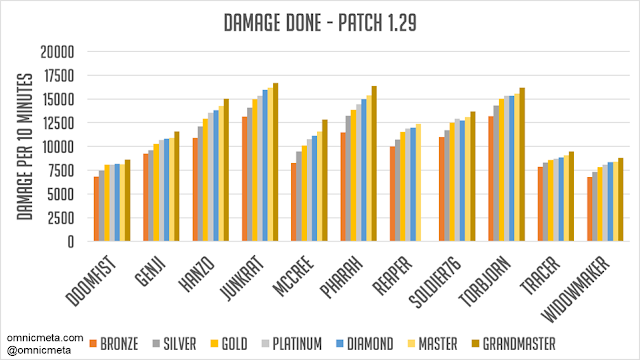 Torb patch changes have enabled a much higher damage output than before, as his damage per 10 minutes has increased 16% on average across the tiers.  Most importantly, this damage appears to be coming from his weapon buffs, as opposed to his Turret (see next chart). While Torbjorn previously was middle of the pack among Damage heroes, he now competes with Hanzo, Junkrat, and Pharah easily.  Simply put, the new Torbjorn puts out a heck of a lot of damage. 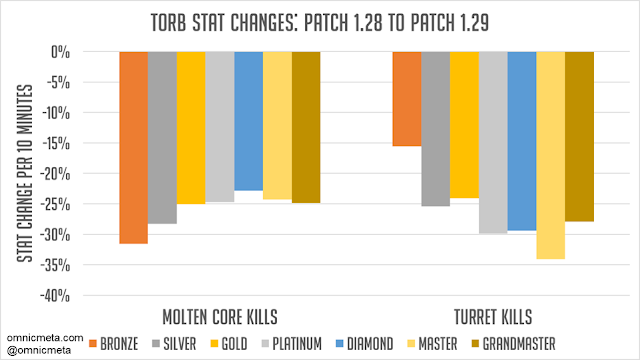 So, is Torb still relying on his turret for kills?  The chart above presents how his new kit has affected the impact of his strongest skills.  Torb's turret (-26% kills) and the new Molten Core ultimate (-25% kills) is having a much lower impact than before.  In fact, Torb's old turret used to contribute to 85% of Torb's kills on average, while his new Turret only contributes to 60%.  Part of the turret lesser impact is likely due to less health and a longer cooldown upon destruction.  Moltencore's changes result from it's difficulty to secure kills, as in many cases opponents can either avoid or walk quickly through the lava without much damage.  In other words, Torb players are relying much more on his primary and secondary weapons (and Overload's buffs) rather than his Turret and Ultimate to provide offense. 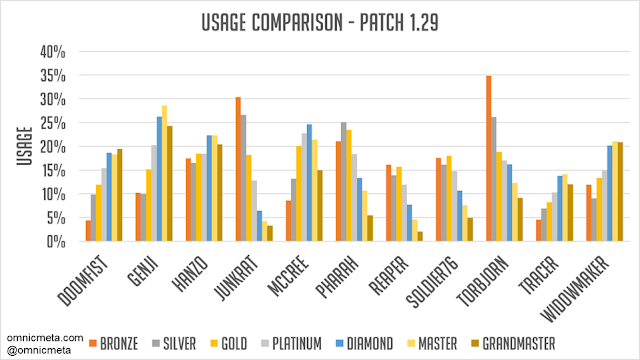 Not surprisingly, players seem to be excited about the new Torb (perhaps even more so with the end of Season 12).  Torb's popularity spiked in the last week (+15% average across all tiers), and he was one of the top played Damage heroes in Bronze through Gold.  To put that into perspective, players are seeing more Torb than Doomfist, Pharah, Reaper, Soldier, and Tracer (at most tiers).  Time will tell if the new Torb has staying power or if his newfound popularity will fizzle out.  Though, I expect you'll be seeing more of him on Payload and Assault maps in Season 13. 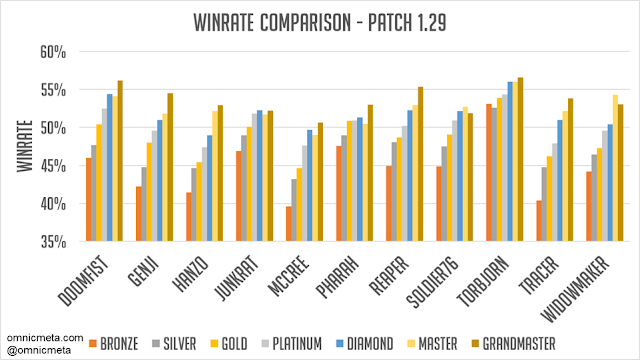 In terms of winrates, Torb saw a big boost with his kit changes.  You'll notice that while the usual suspects (Doomfist) have very high winrates, Torb now boasts the highest winrates of any popular Damage hero in the game (and this despite less reliance on his Turret).  Perhaps most notable is the "Brigitte-like" shape of his winrates across the tiers, staying around 54%.  With high usage rates and high winrates many players may want to pay attention to him a bit more with the new patch.

While Torb is much stronger and more viable than ever before, it's a bit early to claim that he's the latest meta hero.  In my view, part of Blizzard's goal was to make him viable in more situations, and not simply stronger in the niche situations he was already good at (Assault maps).  He should be able to take a Damage hero slot on Payload and Hybrid maps now - even on attack.  That said, we won't know the final result into a few weeks into Season 13 - and how the professional scene decides if and when to use him.

Check Out These Other Articles
Hammond New Hero Analysis
Patch 1.26: Mei and Sombra