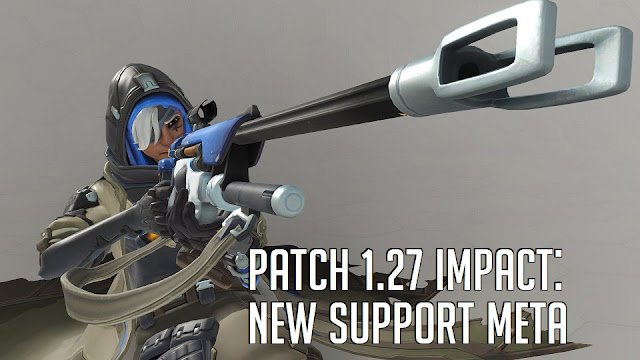 Patch 1.27 made changes to nearly every Support hero - with some of them being quite major.  Top main healer Mercy was nerfed yet again, while Ana, Lucio, and Moira got welcomed buffs.  This article dives into the current landscape of the Support class after the changes have had time to settle on the competitive ladder.  As always, enjoy!


Lots of changes in Patch 1.27 for Support heroes! Ana got a 300HP heal attached to her Nanoboost,  Brigitte got a Shield Bash cooldown nerf (6 -> 7 seconds), Lucio's healing/speed aura radius was increased from 10 to 12, Mercy's healing was nerfed from 60 to 50 hps, and Moira's passive healing resource regeneration rate was increased from 2.0 to 2.4.  Check out the patch notes if you want more details.  In this article we use a week's worth of player data constituting more than 450,000 competitive matches for the support heroes.

The primary patch changes to support heroes revolves around healing (Ana, Lucio, Mercy, Moira) - which is what we focus on in our analysis. 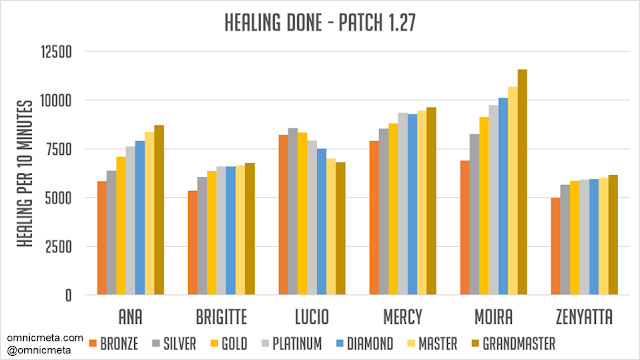 The above chart compares the Support heroes healing per 10 minutes on the current patch.  Mercy's nerf and Ana's buff leads us to start comparing the two heroes as they are now.  Mercy still lead's Ana's healing but by a much smaller gap than before.  At Grandmaster, there is now only a 10% difference between the two heroes.  Meanwhile, Lucio's healing is competing well with these other main healers - due to his aura targeting multiple heroes at once.  Moira has cemented herself as the most productive healer at Platinum through Grandmaster tier - thanks to favorable team compositions and high amounts of burst healing.  The buff to her healing regeneration hasn't hurt either. 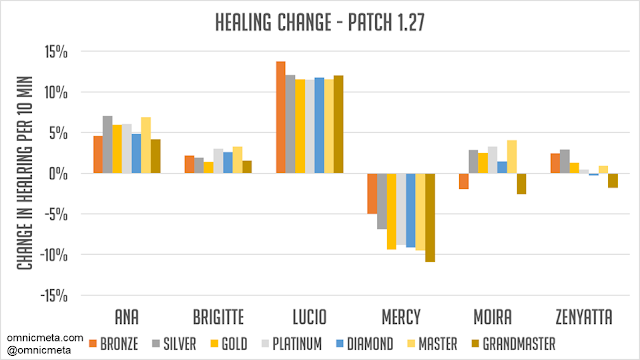 The change in healing output per 10 minutes between the two patches helps complete the story.  Ana has seen a +6% boost in healing output - most likely from team compositions that favor her now, though the buff to Nanoboost also has seemed to help.  Lucio's aura radius has given him a massive +12% boost across the tiers.  At least from my perspective, this is significantly more than I expected - Lucio appears to be much more effective now.  Mercy's healing is down -8% on average, which is less than the -16% expected from the patch change.  Mercy players will see this as good news, as it means they have been somewhat able to compensate for lower healing output by staying alive (and keeping their team alive).  However, damage boosted has gone down -24% across the tiers (not pictured), so Mercy players seem to be focusing on healing more than ever. 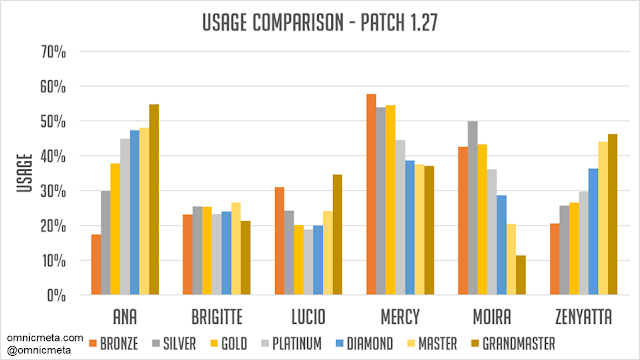 The above chart shows the hero usage for the current Support heroes in Overwatch. Overall, we see good diversity across the heroes in the game.  Ana has a steady increase in popularity up through Grandmaster, where she currently is the most popular support in the game.  Moira is the opposite, being most popular at the lower tiers.  Mercy is the most popular at Bronze through Gold, with a sharp dropoff at the highest tiers.  Looking at the data, those three healers are the most likely to be in your matches right now. 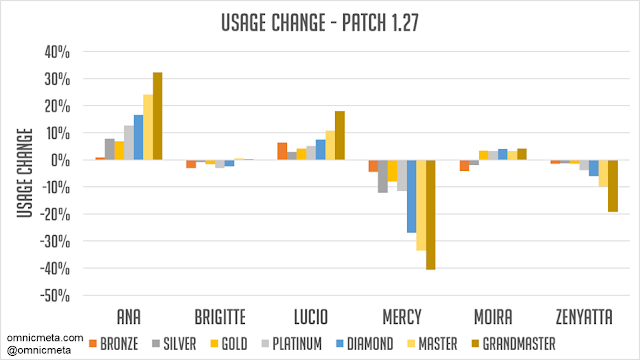 A great indicator of how the meta has shifted is the percent change in usage.  Looking at the chart above, we can see that Mercy has lost a ton of popularity, particularly at the highest tiers.  In a little over a week, Mercy is down -40% at Grandmaster.  Meanwhille, Ana is up +32% - clearly a shift away from Mercy and towards Ana.  Put into context, such large shifts can imply a long-lasting meta change.  We also see that Lucio has seen a good boost at the highest tiers, while Zenyatta has fallen a bit off. 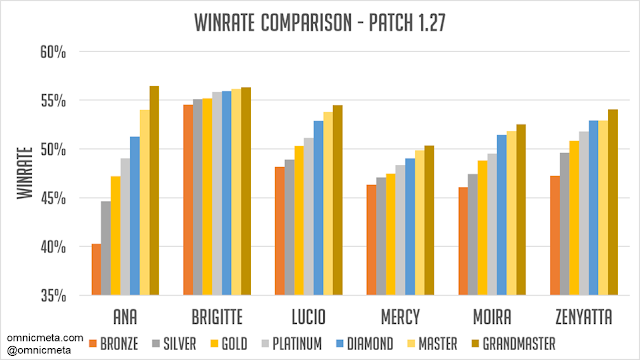 In terms of winrates, Support heroes have shifted quite a bit.  Ana has seen her fortunes improve greatly, +3% increased winrates across the tiers.  At Diamond tier and above, she now has a greater than 50% winrate - making her quite a viable hero.  Part of her success may be due to a +22% increase in Nanoboost assists - her boosted targets are able to stay alive and get kills.  While it may be a stretch to say that the change to Nanoboost is the entire reason, it seems that the nerf to Mercy's healing is a more likely explanation.  Mercy's winrate has lost -2% across all tiers of play, putting her below 50% at nearly every tier.  She still has great abilitites and healing, but it seems like the other main healers are competing favorably at the moment - no longer is a Mercy "required" to win.  Lucio is the last support that has seen a boost, as he also has gone up +3% on average.  As a side note, the nerf to Brigitte's Shield bash appears to have little affect on her viability.  Aside from Brigitte, Mercy, and Ana at the lowest tiers, the support meta looks fairly balanced at the moment.

Lots of players will be pleased to hear that Ana is being played more, and that her winrates make her a viable hero.  Not having to compete against Mercy as much has helped, arguably as much as the Nanoboost buff has improved her.  Mercy on the other hand seems to be in a good place still, though from the number she doesn't seem as much of a good pick at the higher tiers.  In general, the support cast seems viable - with all of them finding a place in the current meta.

Check Out These Other Articles
Hammond New Hero Analysis
Patch 1.26: Mei and Sombra