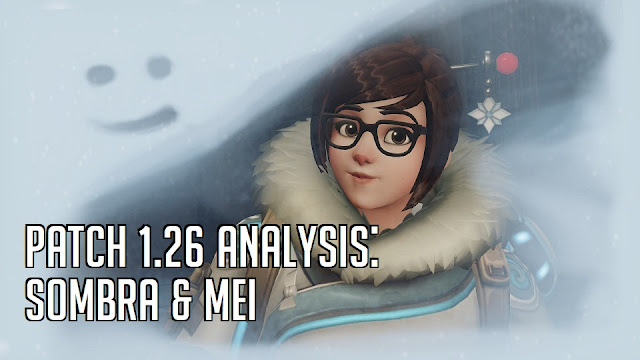 Blizzard has been hard at work with hero changes and balancing this summer, with a flurry of changes both live and currently on PTR.  Patch 1.26 brings a slew of changes to heroes, including some interesting changes to Mei and Sombra.  In this article,  I dive deep into the most impactful changes in the patch.  As always, enjoy!


Patch 1.26 is here!  While Hammond (excuse me, Wrecking Ball) is still disabled for competitive play, there are quite a few hero changes that recently hit Overwatch live servers.  First, falloff damage was removed for Mei's secondary fire, reduced for Bastion, McCree, and Soldier, and introduced for Widowmaker's unscoped assault rifle. Hanzo also saw another nerf to Storm Arrrows (Duration and Cooldown), while Sombra's Stealth and Translocator were modified so that they last infinitely.
Check out the patch notes if you want more details.
It's been two week since the changes hit competitive ladder, and we now have solid data on how the hero changes affect ladder play. This articles focuses in on changes to Mei and Sombra, as the changes to Bastion, Hanzo, McCree, and Soldier appear to have negligible effect on their viability so far.  In this article I use my data set that currently has ~100,000 PC accounts with public profiles that have been actively playing competitive mode.

First up is the change to Mei's Icicle (secondary fire) which no longer has falloff damage.  The projectile ability now does 75 regular damage and 150 crit damage regardless of distance.  Prior to the change hitting live, quite a few players were worried about "sniper Mei" becoming popular in the meta.

However, the current best comparison of Mei's Icicle is (sniper) Hanzo's primary weapon, which fires at nearly the same rate (1.2 seconds per Icicle vs 1 second per charged Arrow) and speed (120 m/s vs 100 m/s).  However, Hanzo's Arrow regular damage is 125, +67% higher than Mei.  So while Mei now has similar projectile to Hanzo, Icicle has vastly less damage - and Mei must rely more on her utility to be productive in game (Ice Wall, Cryo-Freeze, and freezing opponents). 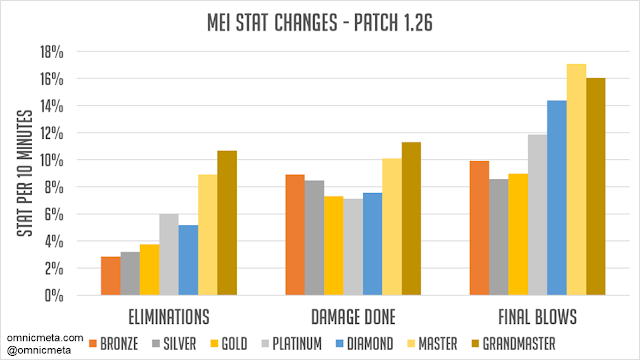 The chart above shows the change in Mei's offensive output since patch 1.26 went live.  The results look quite good for Mei as she sees big increases in eliminations (+6% average), damage output (+9% average), and final blows (+12% average )across all tiers of play.  Immediately noticeable is that the increases are typically higher as the tier increases - skilled players are getting much more out of the changes.

Looks like good news all around for Mei, but there's a caveat.  Despite the buff, Mei is currently ranked #12 for eliminations, #14 for damage done, and #15 for final blows across the 15 damage heroes currently in the game.  In other words, her offensive impact remains one of the lowest in the game even after the changes.  Taking the analysis a step further, comparing "Sniper Mei" to Hanzo shows how different the two heroes can be. Mei's average per 10 minutes is 19.1 eliminations,  7489 damage, and 6.7 final blows - while Hanzo's is 20.4 eliminations, 13708 damage, and 12.9 final blows.  Currently, Mei's offensive capability is most similar to Sombra (another utility hero).

If that comparison seems like a downer, look at the bright side - if you enjoyed playing Mei before, she's even better now.  Being able to spam Icicles at a far-away choke point for head shots enables Mei to do much more offensively, as evidenced by the chart.  On top of that, Mei's ability to wall off opponents, freeze enemies, and self heal remains some of her biggest strengths.

Sombra's changes gave her infinite duration on her Stealth and Translocator abilities with Blizzard's stated goal of letting her more easily "play as an infiltrator and scout" and position herself for kills. 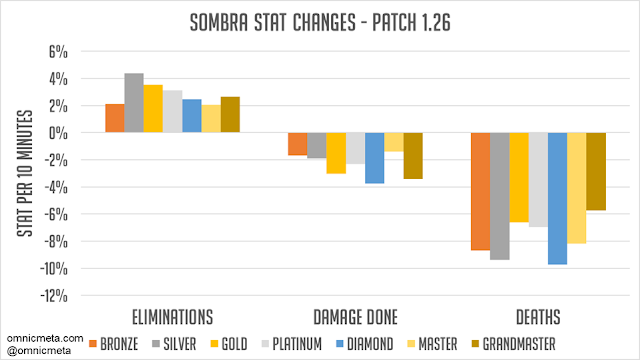 The above chart shows how the changes have impacted Sombra's offensive capability and deaths per 10 minutes.  Most interesting is that Sombra's survivability has greatly improved as deaths per 10 minutes has gone down more than 8% on average.  In fact, Sombra's death per 10 minutes is the best among all damage heroes at 6.8 deaths.  I see this improvement coming as the duration increase to both stealth and translocator reduces the opportunity for mistakes to be made when players engage and disengage (in other words, lowering Sombra's skill floor).  At the same time, infinite duration also raises the skill ceiling by allowing the player to pick the perfect time to use both abilities to survive.

The changes have also increased Sombra's eliminations per 10 minutes by 3%, while her damage output has effectively been reduced by 2% on average.  The increase in eliminations with decrease in damage leads me to believe that Sombra players are being more intentional about targets and securing kills - as final blows has also increased 8% (not pictured).  In short: the changes appear to have shifted Sombras more towards the role of assassin: she is more able to stay alive and focus on killing particular targets in patch 1.26.

But there's always a catch - like mentioned in the Mei analysis, Sombra ranks at the bottom of the 15 damage heroes in offensive output (#14 eliminations, #15 damage, #14 final blows).  To be fair, the changes did not directly increase her damage output, and really only can impact her positioning and survivability.  While some Sombra mains in the Overwatch community seemed to think the changes would be a net negative, my take after looking at the data is that they are a net positive. 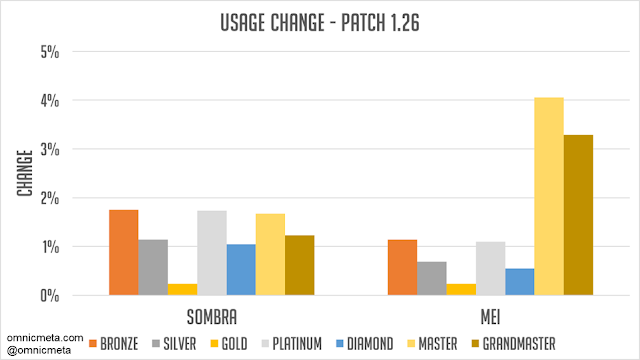 The above chart shows the usage change of Sombra and Mei across the tiers, comparing Patch 1.25 with current Patch 1.26.  While Sombra has seen a lukewarm reception of below +2% at all tiers, Mei has seem increased play at the Master (+4%) and Grandmaster (+3%) tiers.  It's well known that Mei is a high skillcap hero due to her utility and projectile Icicle weapon, and the falloff removal appears to have somewhat piqued the interest of higher tier players.  However, both heroes remain some of the least played heroes in the game, with Sombra at 5% and Mei at 8% average usage across all tiers of play.  Both heroes are still certainly niche, using their utility in particular situations to counter and disrupt the enemy team's heroes and strategies. That's perhaps where the two utility heroes belong anyways, but that is another discussion entirely. 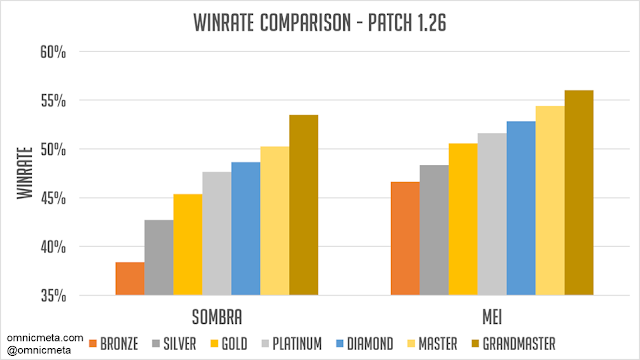 That said, the winrates for the heroes also haven't changed much, with the average change in winrate less than 1% across the competitive tiers.  The above chart presents the average winrate for Sombra and Mei in Patch 1.25 and current Patch 1.26.  Sombra's winrates are still well belong average, though Grandmaster players especially seem to be productive with her (given her high skill cap).  Mei on the other hand remains a hero with very high winrates at every tier, likely due to her ability to disrupt the enemy's carefully-made battle plans and because there are a number of maps (Assault for example) where she excels.

So far, Patch 1.26 hasn't had a large impact on the meta as change to Hanzo, and semi popular heroes McCree and Soldier didn't impact their bottom line.  It also turned out that making small changes to rarely played utility heroes does not make them overpowered.  While the falloff changes were a net buff to Mei, but did not even bring her in line with other damage heroes.  So much for the community fears about turning Mei into a "Sniper Mei".  Similarly, the Sombra changes improved her ability to stay alive and focus down critical targets but have not impacted her bottom line.  At the current moment, both heroes remain at the bottom in offensive statistics when compared among damage heroes (even being beat out by the new Symmetra).  In summary, despite the buffs arguably making the two heroes more impactful (and more fun), they remain niche heroes for now.

The remaining question of Patch 1.26's impact on the Overwatch meta at the moment is Hammond - which I expect will hit live servers soon.

Check Out These Other Articles
Patch 1.25 Analysis: The New Symmetra
A First Look at Private Profiles and Endorsements