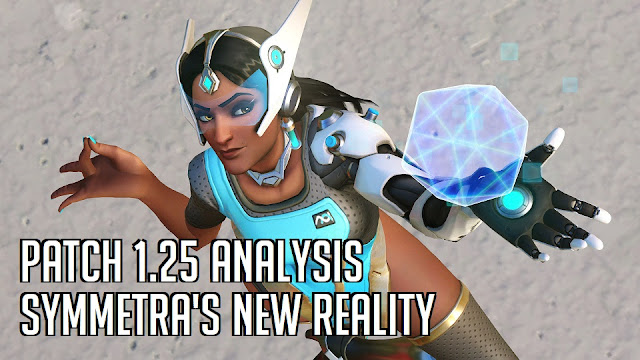 Patch 1.25 brought a massive rework to Symmetra.  Blizzard's design intent for Symmetra's new kit was to shift her into a damage character rather than support.  While she still has the same theme, every single one of her ability has been changed in some way.  In this article, we dive deep into how her kit has changed and how it compares to other DPS heroes.  As always, enjoy!

Symmetra got a new kit in Patch 1.25!  One of the biggest changes for Symmetra has been her move from the Support category into the Damage category.  As such, Blizzard has changed her offensive abilities and enabled her to output more damage.  She has new primary and secondary fire, Teleporter as an ability (two-way teleportation), improved Sentry Turrets that can be thrown, and a new Ultimate that provides a huge barrier to strategically protect your team.  Check out the patch notes if you want more details.

It's been a week since the new Symmetra reached live play on Competitive ladder - and now's the time to dig into the numbers to see how good she is.  In this article I used my data set that currently has ~100,000 PC accounts with public profiles that have been actively playing competitive mode.


Symmetra as a Damage Hero 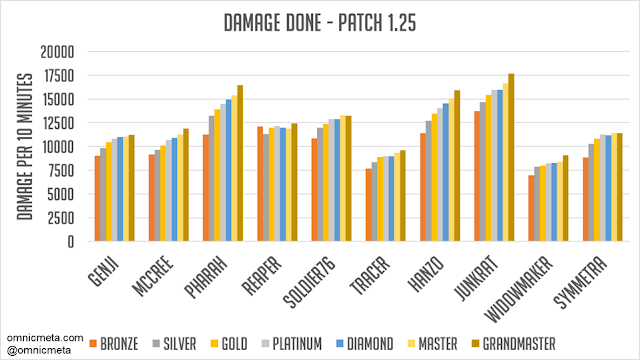 First, let's take a look at damage.  The chart above shows the total damage per 10 minutes in the current Patch 1.25, comparing Symmetra (far right) with other popular Damage heroes.  Blizzard buffed Symmetra's damage output considerably, +25% on average across the tiers.  However, the chart shows that she seriously lags behind other heroes.  Despite having a projectile secondary fire that can easily be used for spam damage, Symmetra currently has average damage output.  If we compare her output to the other spam heroes Pharah, Hanzo, and Junkrat, she trails considerably (by as much as 30%).  My takeaway is that Symmetra's damage output leaves much to be desired. 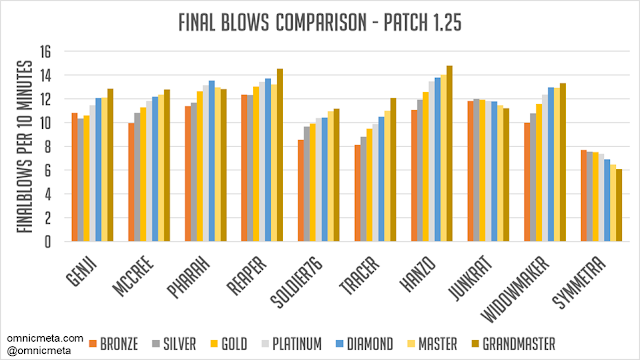 If Symmetra's average damage output didn't impress you, looking at final blows per 10 minutes may shock you.  Final blows are a good metric that helps track how much a hero contributes to kills, rather than simply doing chip damage.  In other words, its a good way to track the overall offensive contribution of a hero - are they contributing or giving the enemy Ultimate charge?  The chart above shows that most popular Damage heroes are getting 10 to 12 final blows per 10 minutes, while Symmetra is getting -30% less final blows on average.  Symmetra places DEAD LAST among ALL damage heroes in the current patch - and below nearly every Tank hero as well.  Looking at the data, Symmetra is not a particularly great offensive hero and well below average across the board.

The Hot New Teleporter and Shield

Many players in the community are seeing the near-infinite possibilities with Symmetra's new teleporter.  The reworked ability makes it incredibly easy to position on high ground or flank the enemy team, while also enabling escapes when things get too hot.  Needless to say, it's an ability with a high skill cap, and used to the fullest can be one of the most strategic abilities in Overwatch. 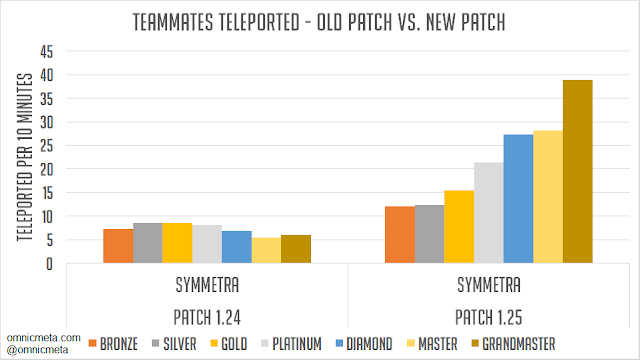 The above chart shows players teleported per 10 minutes, comparing Patch 1.24 and current Patch 1.25.  Note that it's somewhat hard to compare the two patches, as Teleporter in Patch 1.24 was one-half of Symmetra's ultimate, while Teleporter is a regular ability in Patch 1.25.  However, we can clearly see that higher tier players are using the ability much more frequently in the current patch, with Grandmaster players averaging nearly 40 teleports per 10 minutes, and Bronze players closer to 10.  The promise of the ability is quite real, and a bright spot in my analysis of Symmetra's new kit.  However, that promise of a strategic ability doesn't feel like enough with such low offensive impact.  I can't help but wonder what Overwatch would be like if Symmetra's rework had left her a support (and given her a way to give healing/shields). 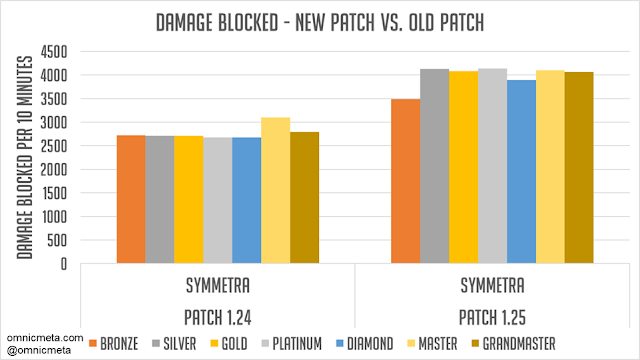 The above chart focuses in on Symmetra's new barrier Ultimate abilty, and shows damage blocked per 10 minutes, comparing Patch 1.24 and current Patch 1.25.  It's very hard to compare an Ultimate with an Ability, especially given the huge differences between Symmetra's old barrier and new barrier.  However, the statistics show that her blocked damage has gone up +45% with her new kit.  Much like Teleporter, Photon Barrier has a strategic element that will take some time to master. 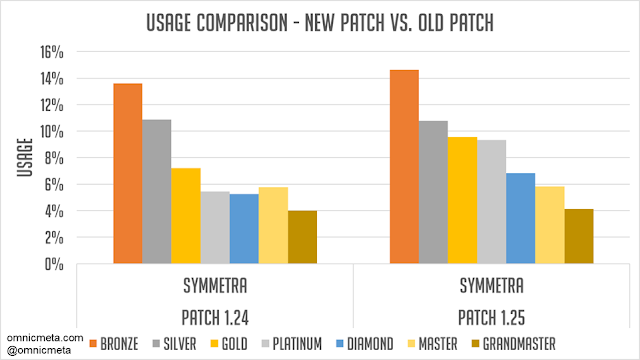 The above chart shows the usage and playrate of Symmtra across the tiers, comparing Patch 1.24 with current Patch 1.25.  In general, Symmetra's popularity in competitve mode has not change much, outside of small increases of +2% in Gold and +3% in Platinum. With a hero rework there can be an initial player interest spike (Sombra, Ana recently), but that simply has not happened.  Based on the statistics I have gathered, not only is Symmetra's offensive capability underwhelming in the current meta, her new kit in general has not piqued the interest of the community at large.  At this point, it seems that only a miracle (or her finding a place in the professional scene) will bring Symmetra into the meta with her new kit. 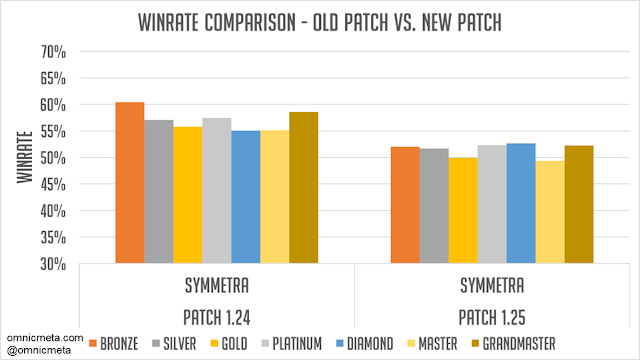 Symmetra's winrate tells an even more complete story.  The above chart presents the average winrate for Symmetra in Patch 1.24 and current Patch 1.25.  Symmetra was long known for being a strong niche pick in certain situations, especially where her former Ultimate ability Teleporter and Shield Generator were strong.  Holding points on Assault maps and Hybrid map were especially well suited for Symmetra - but not so much anymore it seems.  Despite having the same usage rate, her winrates have fallen about -5% on average across the tiers.  Symmetra players are not having the same success that they once did - which is clearly tied to the new kit.  Not all is lost however, as her winrates are still relatively high, especially at the lower tiers.  While more optimistic players may wish to believe that her high winrates will return as the community gets more experience with her new kit, my feeling is that her shift to a Damage hero and low impact may be too hard to overcome without buffs.


Symmetra's New Kit: Not What We Hoped For

The big takeaway that I have is that Symmetra is a weak Damage hero at the moment, similar to Sombra and other lesser-played heroes.  I still have a somewhat open mind as it's only been a week, but so far the numbers don't look great.  However, Teleporter remains a very interesting ability that clearly is seeing a ton of use.  Her whole list of abilities look great, but the damage output numbers will likely need to get buffed in order for her to see more play.  As it stands now, she is a niche hero that is slightly worse as a Damage hero than she was as a Support.  At least, that's what the numbers tell me right now.

Check Out These Other Articles
PC Hero Meta Report for June 25, 2018
A First Look at Private Profiles and Endorsements