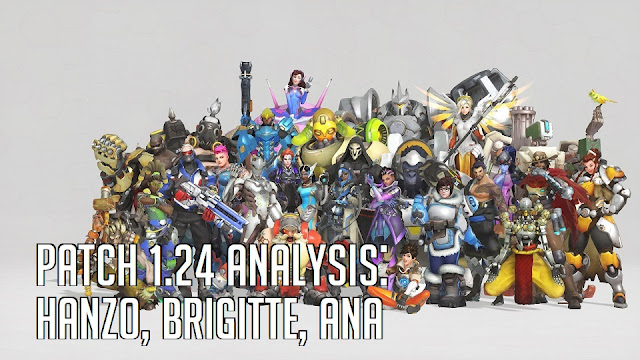 Brigitte, Hanzo: These two heroes are at the top of the meta, extremely disliked by some players, loved by others.  Ana: a former support darling that had previous meta's formed around her (Beyblade) and made the names of quite a few professional Overwatch players (Ryujehong, Chipshajen, among others).  Quite a few players have been crying for changes to these heroes, claiming that Brigitte and Hanzo are too strong, while asking for Ana to get some love.  Patch 1.24 brought changes to these three heroes, changing some of their core mechanics with some interesting results.  As always, I hope you enjoy this article!


This article dives into the latest patch changes for Hanzo, Brigitte, and Ana - and whether those changes have affected their viability in the current meta.  This data represents PC competitive mode play, and is one week's worth of data after the patch changes hit live servers.

What changed for Hanzo? One thing: Hanzo's Storm Arrow damage from 80 damage to 70 damage per arrow.  This change essentially removed the ability of Hanzo to one-shot 150 HP and 200 HP heroes (when damage boosted) by nailing a crit.  So what's the impact on Hanzo's bottom line? Let's take a look at the change. 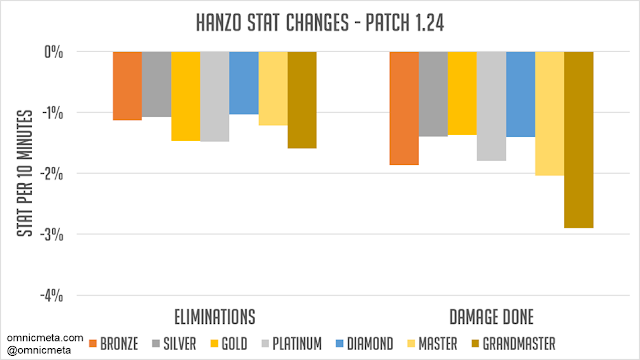 The chart above shows the percent change of Hanzo's eliminations and Damage Done.  If you recall from our Patch 1.23 analysis, Hanzo was  at the top of all DPS heroes for damage ahead of the nerf.  Looking at the chart, Hanzo's bottom line hasn't changed much - eliminations are down only 1% and Damage done only 2% on average.  Perhaps the most important part of the change affects counter play, as Tracer and other heroes are now less vulnerable to Hanzo's burst damage.  This certainly opens the door a bit to slotting in other DPS heroes (likely alongside Hanzo) to counter.  The bottom-line: even with some of the one-shot potential removed, Hanzo maintains his status at the top of all DPS heroes in Season 10.

Brigitte's nerfs to max armor from her Rally ultimate (150 -> 100) and Shield Bash cooldown (5 -> 6 seconds) were welcomed by a lot of competitive players.  Though she is no longer a must pick in the meta (more on that later), she remains an important hero in competitive mode. 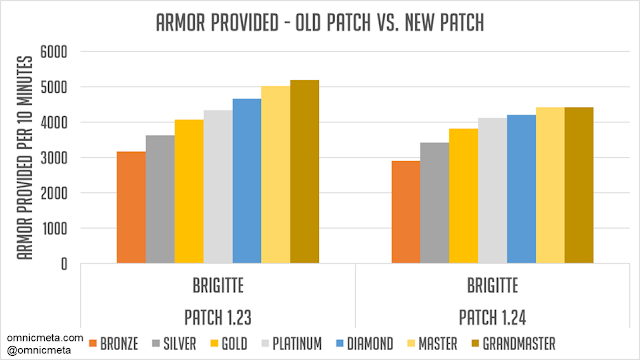 The chart above compares armor provided in the two patches.  The nerfs to Rally had a noticeable impact, as armor provided has dropped -7% on average across the tiers, with the highest drops in the highest tiers (9% to 10% in Diamond through Grandmaster).  I suspect this indicates that players in the highest tiers were using Rallying more proactively ahead of fights to build up the full buffer, which is now less valuable after the nerfs.  However, the Rally nerf is by no means a death blow to Brigitte.  Her armor is still quite valuable, and Brigitte's total protection (Healing + Armor) remains quite high - Brigitte continues to have a high impact as a support. 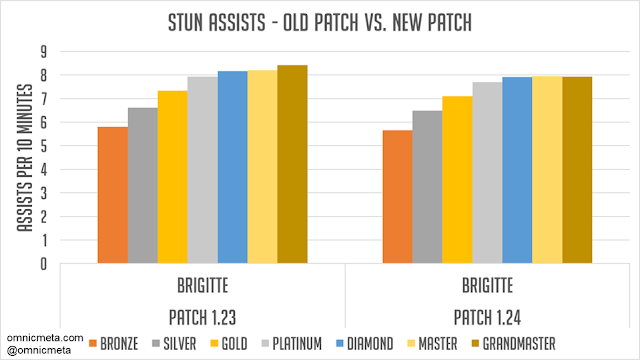 On the other hand, the cooldown nerf to Shield Bash appears to have had minimal impact.  The best view into Shield Bash we current have is her stun assists, where Brigitte stuns and a teammate deals a final blow - which is shown in the chart above. There has been very little movement in Brigitte's effectiveness with Shield Bash, as her assists have fallen only -4%, where we may have expected a 20% reduction from a 5 second -> 6 second nerf.  Other relevant statistics like Brigitte's eliminations and deaths per 10 minutes have also not changed significantly.  The low impact of the change indicates that most Brigitte's are not spamming Shield Bash all the time, and instead are mostly choosing key moments and targets to be effective.

Ana's had two changes in the current patch.  The first increased her magazine size from 10 to 14, and the second allows her to shoot through full-health allies so that she can damage or heal down range. 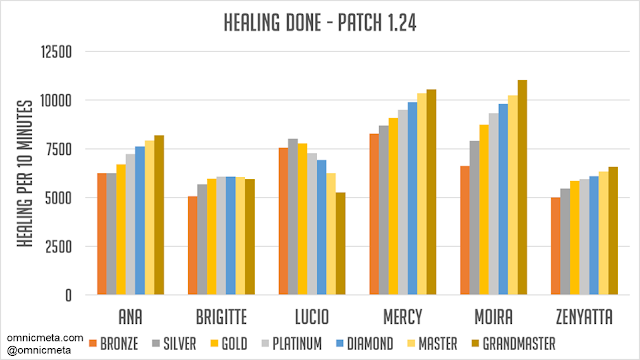 While both of these changes are improvements for Ana (though the pass-through shots is still contentious), she still isn't in a great state with the current meta.  The changes have been positive overall, boosting her healing output by +4% on average across the tiers.  Looking at the chart above which compares her effective healing output per ten minutes to the other healing supports, she still lags behind the other two main healers Mercy and Moira.  It's unclear what changes (if any) Blizzard needs to take to bring Ana in line with other main healers.  With an otherwise interesting kit (Sleep Dart, Biotic Grenade, Nanoboost), Ana may just be waiting for the next meta change to find her footing.

The Meta: Usage and Winrates

So what's the bottom line of these changes?  Let's take a look at the latest winrates and usage for these three heroes. 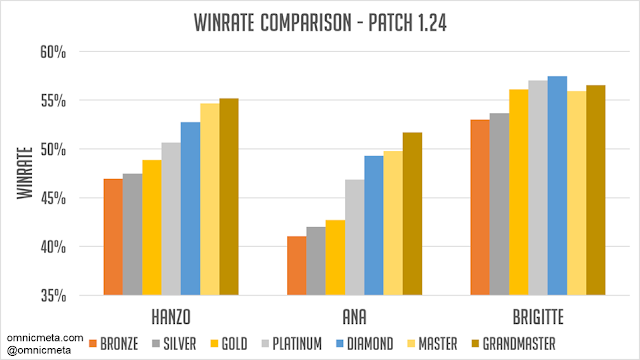 The chart above shows the winrates of the three heroes in the current patch.  First, Brigitte's still have a very high winrate across all tiers of play - especially at the lower tiers.  She's a strong character that  clearly is at the top of Overwatch.  Hanzo's winrates have also maintained their high levels, while Ana has not seen a boost from her changes.  All these changes that players have been waiting for have been minor adjustments and have not really changed the viability of the heroes on ladder. 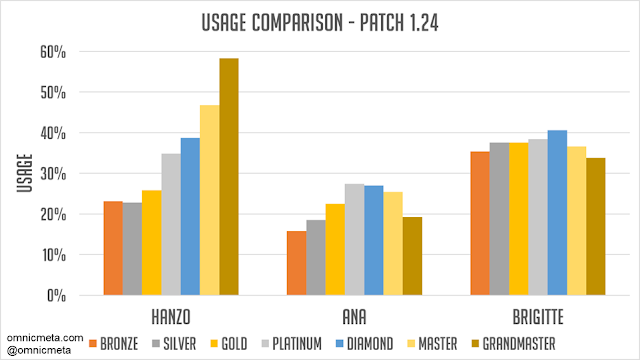 Without much change to statistics, Hanzo and Ana's pick rates remain roughly the same.  Hanzo has become a top DPS pick in seasons 10, and the nerf to Storm Arrows hasn't changed that.  On the other hand, the changes to Ana haven't affected her place in the meta either as the least popular healer.  The biggest change in the meta is that Brigitte has fallen off from her "must-pick" status at the high tiers, and has settled into being a strong hero in the meta with a near 40% pick rate across the tiers.  She very well may be team composition dependent - if your doesn't have heroes that synergize with her (Zenyatta, Zarya, Reinhard), Brigitte isn't as useful.  As Brigitte was often played alongside two other supports, taking a DPS slot - she also is feeling competition as two DPS compositions remain pretty popular.  Based on her high impact and winrates, a simple recommendation is to find these situations where Brigitte shines, and exploit them.

While none of the changes had the huge impact that some players were probably expecting, there's no denying that it's a step in the right direction.  Removing one-shot potential from Hanzo, and armor stacking from Brigitte enables more counter play, without completely nerfing those otherwise great abilities for those heroes.  While the changes to Ana have increased her healing a bit, they do show some hope that Blizzard cares about all the heroes, and I think we can expect more Ana love in the future if she needs it.  For now though, the Season 10 meta remains roughly the same with very different heroes that previous seasons.