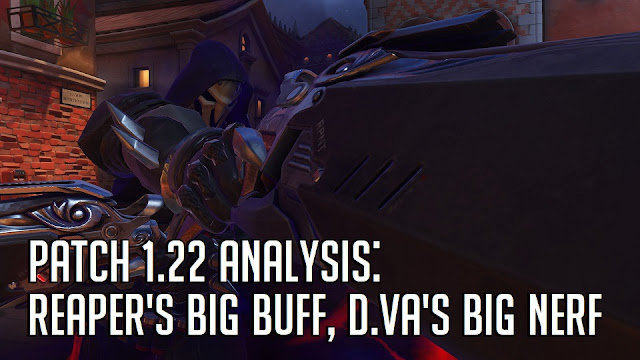 Blizzard has decided to slowly tweak heroes in an attempt to bring balance to the Overwatch competitive ladder.  Recently, Reaper and Mei have continued to received buffs, while Doomfist received both buffs and bug fixes.  D.Va and Zenyatta have continued to be incredibly popular on ladder and in pro play, and in Patch 1.22 received nerfs to balance them.  In this article, I dive into how the changes have affected the viability of each of the heroes on ladder.  As always I hope you enjoy this report!

Patch 1.22 had buffs to Doomfist, Reaper and Mei, with nerfs to D.Va and Zenyatta. First, as a recap, here are the changes that came with the patch:
As we will see in the data, these changes are quick major - and have significantly affected the viability of each of the heroes.  The following analysis performed uses PC data on competitive ladder before in the week before and day after Patch 1.22 was released.

Each of these changes affect the effective damage output of the five heroes, and we focus in on changes to eliminations and damage per 10 minutes. 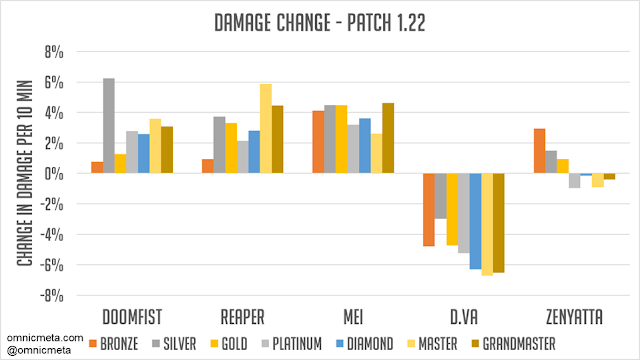 The chart above breaks down the changes to damage per 10 minutes for each hero.  An important point to remember is that effective damage changes can contribute to large swings in viability.  For example, a -5% primary damage nerf for Soldier arguably started his decline from being a near must pick in prior seasons.  The buffs have contributed to greater damage output for Doomfist (more successful Rocket Punches), Reaper (fast reload and chase), and Mei (multiple targets).  A +4%  increase in damage for those heroes is substantial in boosting their viability, as we will see in the rest of the data.  On the flip side, the nerf to D.Va's missiles and boost has caused her damage output to go down -6%.  That decline greatly affects her ability to burst down enemies, which was a former strength of pre-patch D.Va.  Zenyatta's nerfs don't appear to have affected his damage output - a welcome sign for a good number of support players. 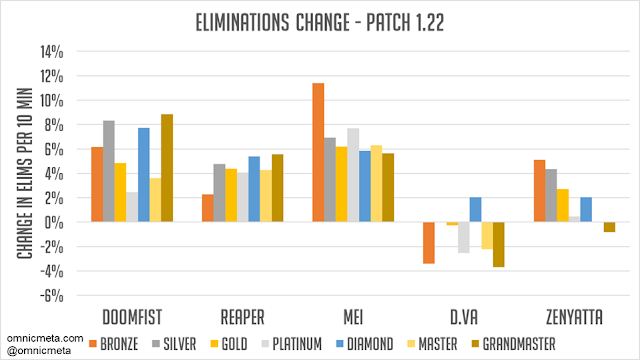 As far as eliminations per 10 minutes, Doomfist (+6%), Reaper (+4%), and Mei (+6%) have surged.  Where are these eliminations stemming from?  After the buffs, Doomfist is hitting +6% more Rocket Punches, Reaper is getting +11% more final blows, and Mei is freezing 10% more enemies per match.  In looking at the damage and elimination changtes, it is clear that these buffs were not minor "quality of life" changes.  They are making these heroes much more effective in offensive capability.  Interestingly, D.Va and Zenyatta see less change in eliminations per 10 minutes, which likely points to a players adapting and playing the heroes in a slightly different way in order to keep their game impact up.

Impact of the Patch Changes on the Meta

How have players responded to the changes?  Perhaps how you might expect - those heroes that got buffed are finding even more success on ladder, while those heroes getting nerfs aren't fairing as well.  Considering that the two nerfed heroes (D.Va, Zen) are heavily played in the current meta, a negative impact 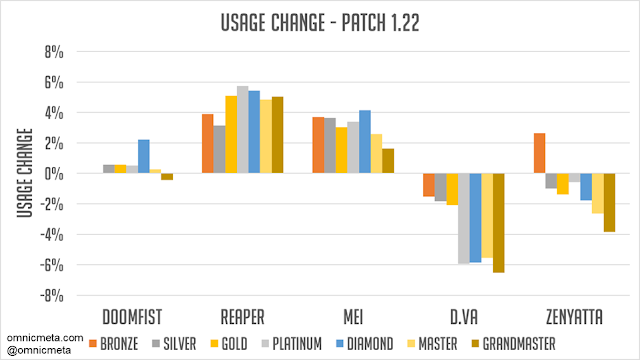 The chart above shows the hero usage change for the heroes affected by Patch 1.22. While Doomfist sees very little change in play rate (and still below 10% usage across the tiers), Reaper (+5%) and Mei (+3%) see a significant change in play.  Reaper's usage had been slowing declining over time - he is now being played above 20% usage in the lower tiers, and above 10% in the higher tiers.  Mei is still a niche pick at 13% usage at Bronze, declining to 5% usage at Grandmaster.  With greater success overall (winrates discussed below), we made see even more Reaper and Mei on ladder in the future.  D.Va on the other hand, appears to be falling quickly out of favor - from Platinum to Grandmaster she is down -6% usage on average. While D.Va is still the most picked tank at around 50% usage, Rein (40%) is not as far behind.  Zenyatta declines more at the higher tiers - like indicating more reliance on burst damage from his Orb volleys. 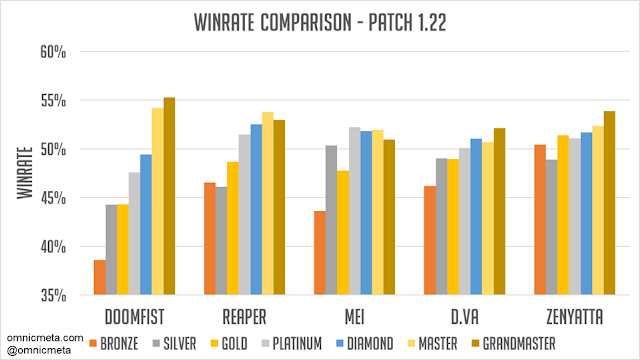 The changes to the heroes has also significantly affected their winrates.  The biggest change has been to D.Va, who now ranks at some of the lower winrates at the highest tiers.  Zenyatta winrates are also no longer as impressive as they were before, though his Orb volley change is arguably minor and can be played around.  Meanwhile, Reaper's winrates are looking solid across the board, while Doomfist is putting together some great winrates in Master and Grandmaster.  However, it's worth a reminder that both Doomfist and Mei are niche picks in the current meta. 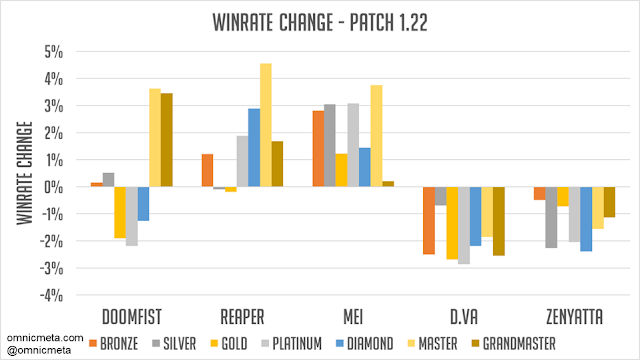 The winrate changes for each hero mirror the usage changes.  D.Va and Zenyatta's winrates have plummeted, Reaper and Mei's winrates have generally gone up, and Doomfist's winrates have surged at the higher tiers with the increased Rocket punch hit box.  Even just a few days into the patch, it seems clear that the viability of each of these heroes has changed.

A New Meta In The Works?

Will D.Va finally be toppled as the most popular tank?  The missile and boost damage nerf seems to have significantly affected her viability - as many players expected.  However, D.Va still has a number of powerful abilities, including Defense Matrix and her high mobility - and will likely stick in the meta for the near future.  It much less certain whether the Zenyatta changes will permanently affect his viability, as players haven't had much time to adjust to the changes yet.  Meanwhile, Reaper has the best chance of the buffed heroes to become a big part of the meta.  With his winrates becoming some of the highest in Overwatch and effective damage output increased, he is much more viable.  Despite similar viability increases, Mei and Doomfist need a 20%+ in playtime to become a big part of the meta, are therefore are likely to remain niche picks in the near future. In summary, it's exciting times if you like to play Reaper, and if you are a D.Va main you may have a few more reasons to consider another offtank at the hero select screen.