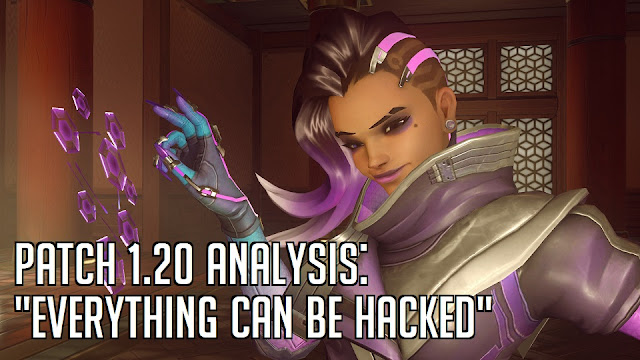 Sombra has had an identity crisis since she was released more than a year ago - "Is she a support? A DPS?".  Due to a number of factors, players didn't click with her - and she became one of the least played heroes in all of Overwatch.  Some pro players found small success playing her on certain maps due to EMP being a very strong and easy to charge ultimate, but in general she still didn't see play.  Patch 1.20 came along last week and changed that - moving her away from an EMP farmer and more towards an hacker behind enemy lines.  I won't spill the beans right away, but Hack in general got a huge buff this patch - and has led to her being much more viable on ladder.  As always, hope you enjoy this analysis!

Patch 1.20 had changes to Doomfist and Mei, but the changes to Sombra were by far the biggest, changing her playstyle and utility as a hero.  First, as a recap, here are the changes that came with the patch:

Biggest Changes to Sombra:
The changes to ultimate charge and her primary weapon change her playstyle from off-support into more offensive-oriented hero.  Farming EMP by getting allies to heal on hack health packs is no longer a thing, while the weapon, translocator, and hack changes push her to be more aggressive in trying to seek out enemies to hack and eliminate. We now dive into how the patch changes have affected Sombra and her viability in Overwatch competitive.

The biggest changes are to Sombra's hacking through a buff to her regular ability and a nerf to her EMP charge rate.  But just how much of an impact has there been? 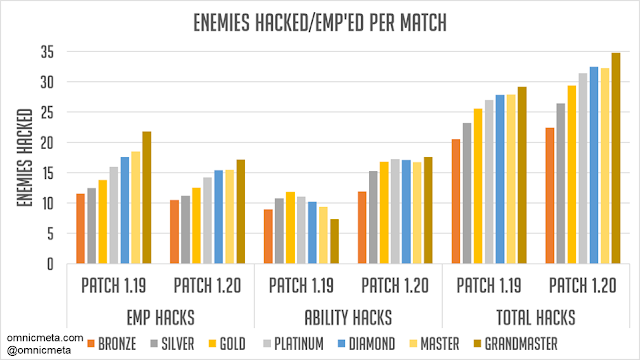 The chart above breaks down the before (Patch 1.19) and after (Patch 1.20) for each type of hack (EMP and ability) and records the total hacks per match by tier.  Overall, total hacks per match are up by +15% on average across the tiers - a huge buff.  Whether hacked enemy = dead enemy remains to see see (later), but we can see that Blizzard has pushed Sombra into making Hack even more of her base mechanic.  The biggest change is that EMP hacks have tanked -13% on average, while regular ability hacks have soared +65%.  The decline in EMP is the result of the ult charge nerf - it is now much harder to obtain.  One thing that comes out quite clearly from the data is that high tier players (Grandmaster) got the vast majority of their hacks from EMP, and didn't use the regular hack much.  This data points to the old method of using Sombra to simply farm EMP as fast as possible using hacked health packs.   The decline in ability hacks as the tier increases in Patch 1.19 clearly show this phenomenon.  The new Sombra kit pushes players to use the regular hack ability as much as possible to get value - and higher tier players now focus much more on individual enemy hacks.  The quicker hack time and ability to hack away Genji/Hanzo/Pharah/Lucio mobility is a pretty big deal as well. 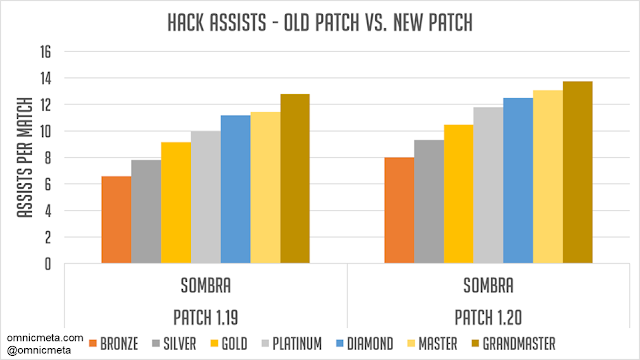 It turns out that the +15% increase in hacked enemies correlates quite well with an increase in those enemies being killed.  The above chart shows how Sombra's assists per match have jumped around +15% on average as well.  With hacks shifting away from EMP and towards regular ability hacks, it is good news for Sombra players that all hacks are quite effective is eliminating your opponent.

Needless to say, an in-your-face Sombra hacking you is much more common now.  But has her offensive output increase with the primary weapon changes - or is she still a slouch when it comes to DPS? 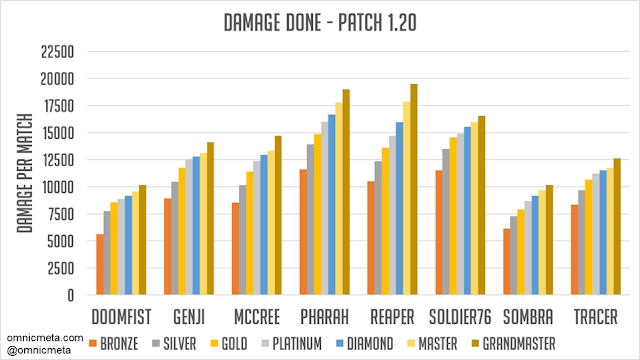 The above chart shows Sombra's damage per match compared with other Offense heroes.  Overall, Sombra's damage per match has increased a modest 5% across the tiers.  Comparing her with other heroes - she is still the weakest in real damage output (and roughly tied with burst-hero Doomfist).  That said she's within 25% of Tracer's output, a useful comparison that shows how she compares to another flanker. 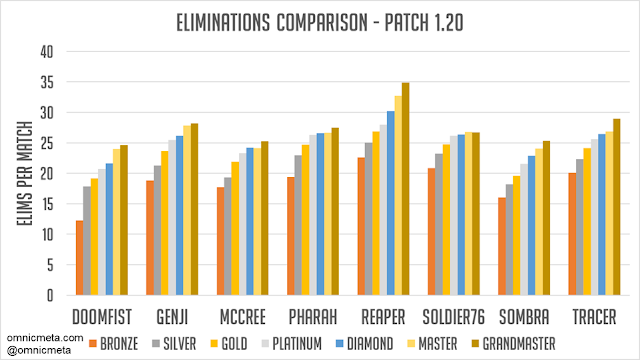 A bigger change is seen in Sombra's eliminations.  With her new playstyle being much more active and out in the field, her eliminations per match has gone up +11% on average, enabling her to put up statistics much more similar to other heroes.  Hacking and more time with translocator is likely enabling this eliminations.  While she still trails other flankers Genji and Tracer quite a bit, she is within 10% to 15% of those heroes.


Impact of the Mercy Nerf on the Support Meta

How have players responded to the changes? They have started to try Sombra out - she is seeing real time on the ladder. 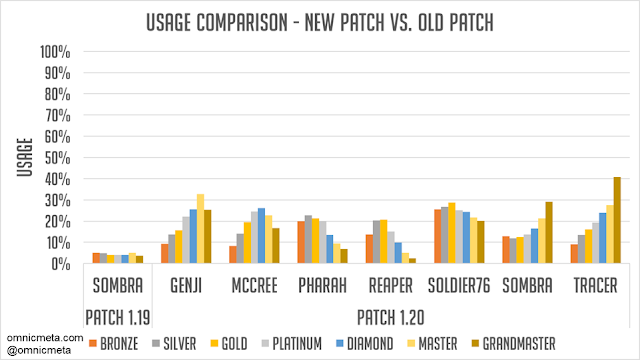 The chart above shows Offense hero usage in matches for Patch 1.20, with Sombra's usage in Patch 1.19 provided for reference. Sombra has been known as a high skill ceiling hero that requires good coordination with your team, and we see that reflected with increase play mostly at the higher tiers.  Sombra's usage increased around +12% on average across the tiers, with the largest increases at the highest tiers (16% in Master and 25% in Grandmaster).  Currently, she is one of the most popular Offense heroes in those tiers, while lower tiers she is still viewed as niche. 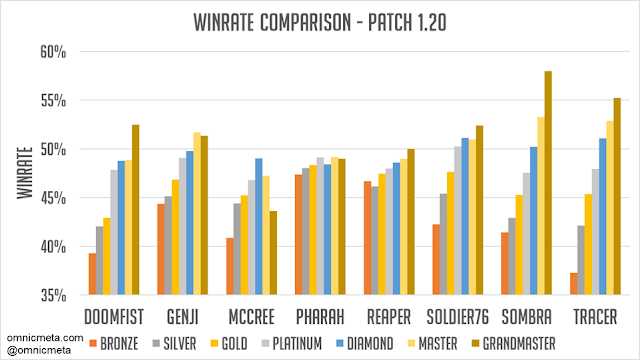 Looking past Sombra's popularity - is she a hero that is even viable in today's meta?  Sombra's winrate has jumped considerably with the changes, up more that +3% across all tiers The chart above shows current winrates for other Offense heroes.  Looking at the data, the answer is mixed - both yes and no.  Currently, she has the steepest winrate curve of all the Offense heroes, and the highest winrates in Master and Grandmaster.  At lower tiers, however, most other heroes appear to have more success.  The data may point to two things: Sombra is still a niche hero good at certain maps and scenarios, and her high skill cap and require team coordination make her hard to play at lower tiers.

Sombra, Hacking Everything and Everyone

Sombra has finally gotten some buffs that make her viable (in general).  Her damage output remains a drawback when playing her as DPS, but is easily compensated for with her hacking ability.  Hack as a mechanic gets a huge buff in this patch - as does most of Sombra's kit.  With EMP nerfed, her playstyle is now more active - enabling the rest of the team to capitalize on hacks rather than stay close to and heal at healthpacks.  She may still be a niche hero and require lots of coordination from your team - but she is a much improved hero and definitely worth a look when queuing.