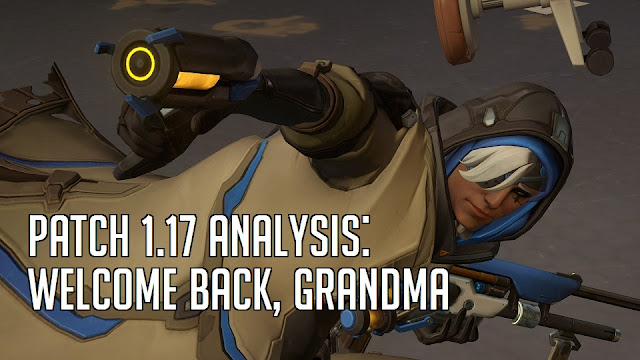 Patch 1.17 has been live for a few days now, with some big changes to Mercy and Ana.  Mercy got a nerf to Resurrect, while Ana got a significant damage buff.  The results of these changes are apparent already, and have translated directly into a shift in the Overwatch Hero Meta.  In this article we dive deep into how the changes have affected Mercy and Ana from a data analysis perspective.

Patch 1.17 had some huge changes to the most popular Overwatch hero - Mercy. To summarize, Resurrect as a regular ability has changed, as there is now a 1.75 second cast time before the teammate can be revived.  During the cast time, Mercy moves 75% slower and can be interrupted (stopped) with stuns and knockback effects.  While in Valkyrie form, these restrictions are removed, but clearly introduce a greater risk for Mercy during normal Resurrect attempts.  Also in Patch 1.17 was a buff of Ana's rifle damage from 60 to 70 per shot.  This is a much welcomed change, as it allows her to deal with 200 HP enemies in 3 shots instead of 4.


With Mercy being a "must pick" in Patch 1.16, any changes to her kit may affect the Hero Meta greatly - and with Ana getting a small buff it turns out that so far that is the case.  Below, we dive into the changes and look at how the changes have affected Mercy ability to impact competitive matches with resurrections, and Ana's change with her ability to provide more offensive firepower.  We also look at how the changes have affected Mercy's and Ana's winrates and usage rates.  The data represents current Overwatch play on PC.

The Nerf to Mercy's Resurrect Ability 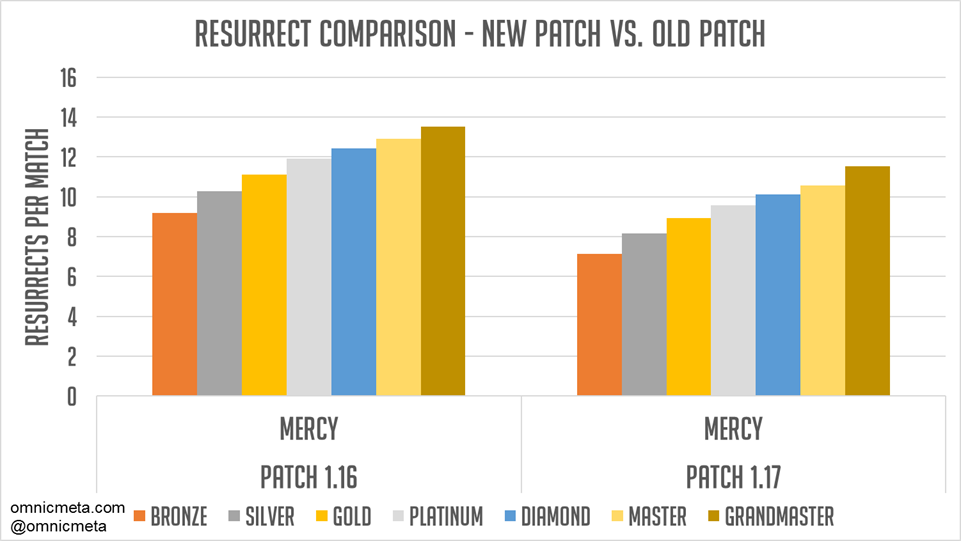 Resurrect clearly is a high impact game mechanic, with many Overwatch players having strong feeling about whether or not resurrect is an ability that deserves to be in the game.  The above chart show the number of resurrections per competitive match in the old 1.16 patch (left) compared with the new 1.17 patch (right) for each tier.  Blizzard has kept their promise of reducing the impact of Mercy's resurrect, as the data shows a -20% decrease in resurrections per match across all tiers of play.   The decrease has affected lower tiers the most: Bronze players has seen a -23% decrease, while Grandmaster players only a -15% decrease.  In other words, the data suggests that the Patch 1.17 changes make Resurrect harder to pull off and have effectively increased her skill cap.

However, some bad news: even with these changes, Mercy's Resurrect is still stronger than before her Patch 1.15 kit rework.  She is still getting more than 40% more resurrections even in Patch 1.17 than she was prior to her rework.  Granted, Resurrect is being used differently in Patch 1.17 (negate early team fight deaths) vs Patch 1.14 (Resurrect multiple teammates at the end of a team fight).  So, some good news for many players that Resurrect has been toned down, though Resurrect is still arguably more powerful since it became a regular ability. 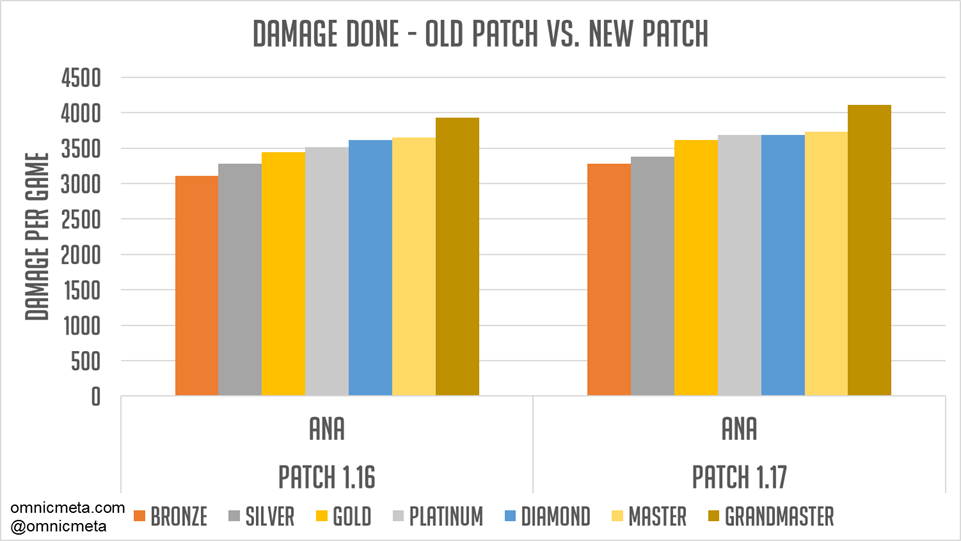 Ana's rifle got a +17% damage buff, and the chart above shows how big of an impact that is in real matches.  Ana's average damage per competitive match only goes up around 5% across tiers, a far cry from what the buff promised.  Similarly, Ana's eliminations per match also goes up around 5% per tier.  Despite this seemingly low impact result, keep in mind that we expect healers to spend the vast majority of their time healing, and not trying to kill the enemy team.  From the perspective that Ana is a main healer, we simply don't expect her damage and eliminations to be that high.

In general, the change appears to have affected perception mostly, rather than pure statistics.  This new found offensive capability may actually help change the tide of fights, as enemies have more to fear from a good Ana - and are able to play less aggressively now than in the past.  As an example, Pharah and flankers become particularly more vulnerable with the change, and may need to play more conservative. 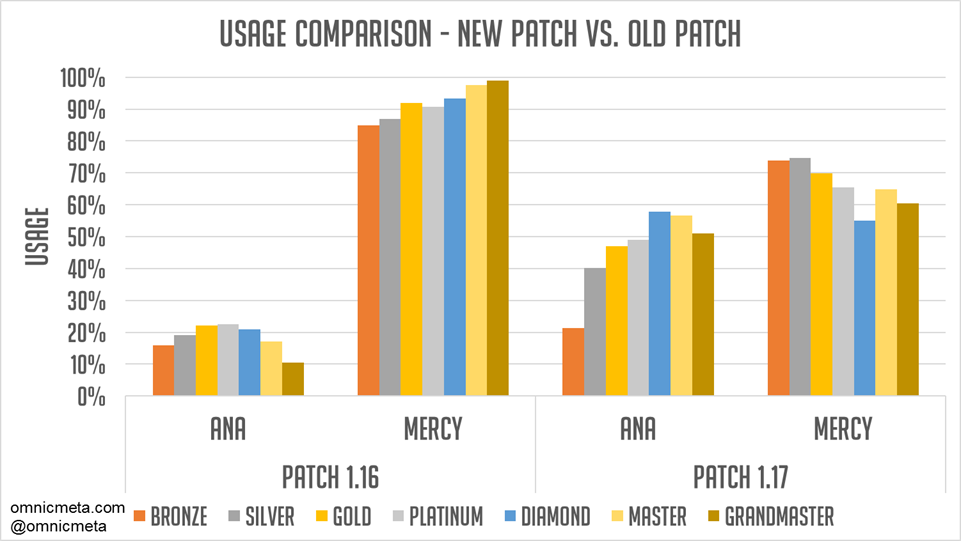 Time to answer the big question: have the changes affected the Overwatch Hero Meta?  Definitely, and in a major way.  The above chart shows Patch 1.16 (left) and Patch 1.17 (right) usage rates for Ana and Mercy - and the result is pretty incredible.  Ana is up over 25% usage in the lower tiers and over 40% usage in the higher tiers.  Ana is now in roughly half of all competitive matches, making her one of the most played heroes in all of Overwatch - a big change from being one of the least played.  Mercy is no longer being played a a near 100% rate - as Ana has directly eaten into her playtime.  The data shows that Mercy's usage has dipped by the same amount that Ana's went up,  while Lucio and Zenyatta stay roughly the same.

For players that really were tired of Mercy every game, that no longer is the case.  Whether this is a trend of simply players believing that "Ana is good, Mercy is bad" is unclear, and at this point we may see Mercy or Ana play go up in the future.  Regardless of why this has happened, let me be one of the first to say: "Welcome back Grandma... we missed you". 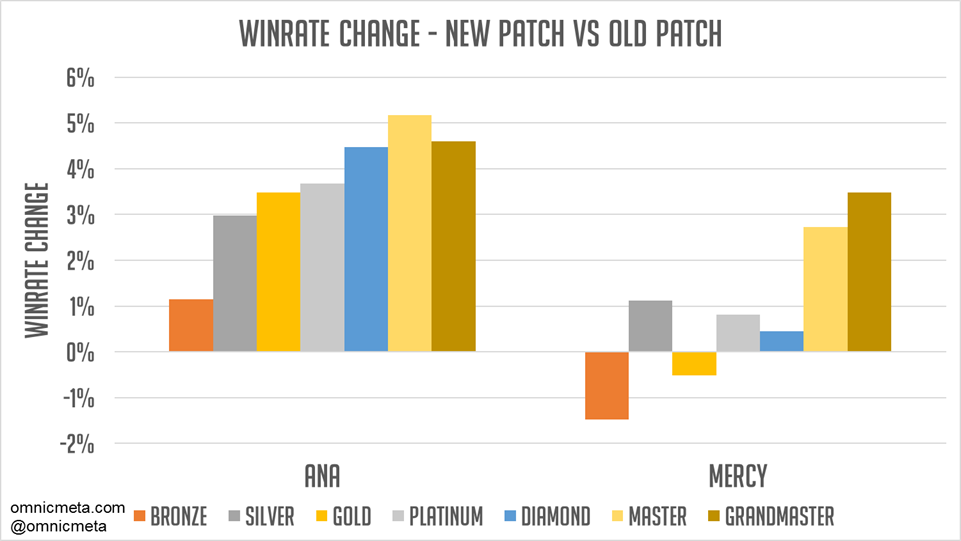 So, with a Mercy nerf and an Ana buff, how has that impacted their winrate?  For Ana, the change appears to have had a positive impact across the board.  At the lower tiers, Ana players are winning 3% more of their matches, while higher tier Anas are winning up to 5% more of their matches.  A great result to be sure: Ana is no longer the "garbage tier" hero that she once was - though as mentioned before, much of this success is likely predicated on perception, and not increased offensive statistics.  For Mercy, her winrate hasn't changed much - and even has gone up 3% at the higher tiers.  Many players would have expected her winrate to be down with a major nerf to Resurrect, but that simply isn't the case.

Summary: Mercy, the Most Overpowered Hero in Overwatch?

It really seems that Mercy's incredibly high mobility and base healing output, coupled with Valkyrie makes for a very strong support kit - and arguably the best in the game.  At this point, it remains to be seen what Ana's place in the meta is, but whispers in the Overwatch community remember her success in the triple- and quad-tank metas.  It may very well be the case that Ana is more meta dependent at this point.  Regardless, players are back to playing Ana now, and with a vengeance - Mercy is no longer viewed as the "must pick" that she had been prior.  With Moira coming into the competitive scene in only a few days, there will be even more competition for support slots.  Moira looks pretty strong, and there is no doubt in my mind that she will shake up the hero meta even more.  Patch 1.17 has certainly made a big impact on support heros - as promised.