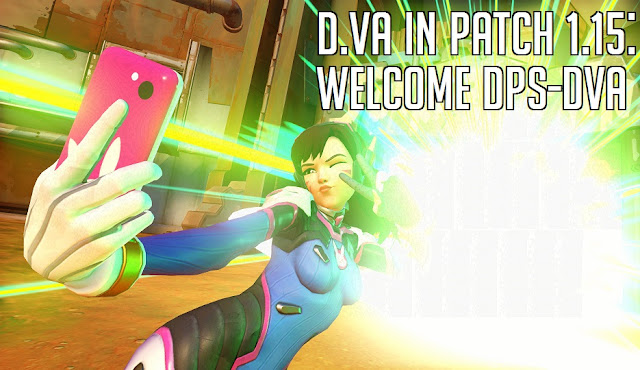 Patch 1.15 has been live for nearly a week now, and players are getting used to the big changes. D.Va's rework has been on the minds of many players as she saw big nerfs to her Defensive Matrix and additional damage buffs.  In this article we dive deep into how the changes have affected D.Va from a data analysis perspective.

Patch 1.15 had some huge changes to the most popular Overwatch hero - D.Va.  The biggest change is the huge nerf to Defensive Matrix - her resource meter drains twice as fast, though recharges 25% quicker.  To compensate for the nerf in Defensive Matrix, Blizzard added in the ability to fire while flying, while also adding a new offensive ability - Micro Missiles.  Micro Missiles add additional burst damage on a 8 second cooldown.

Defensive matrix has long been one of the most controversial topics in the Overwatch community.  D.Va could shut down most most enemy ultimate with the ability, while at the same time protecting her teammates while they "ulted".  The extra damage capability appears to be a shift in D.Va's role as well.  We dive into how the changes have affected the key ways D.Va impacts competitive matches by looking deep into her defensive and offensive capabilities.  We also look at how the changes have affected D.Va's winrates and usage rates.  The data represents current PC play, while Console play is very similar.


Impact on the Game: Damage Blocking and Survivability 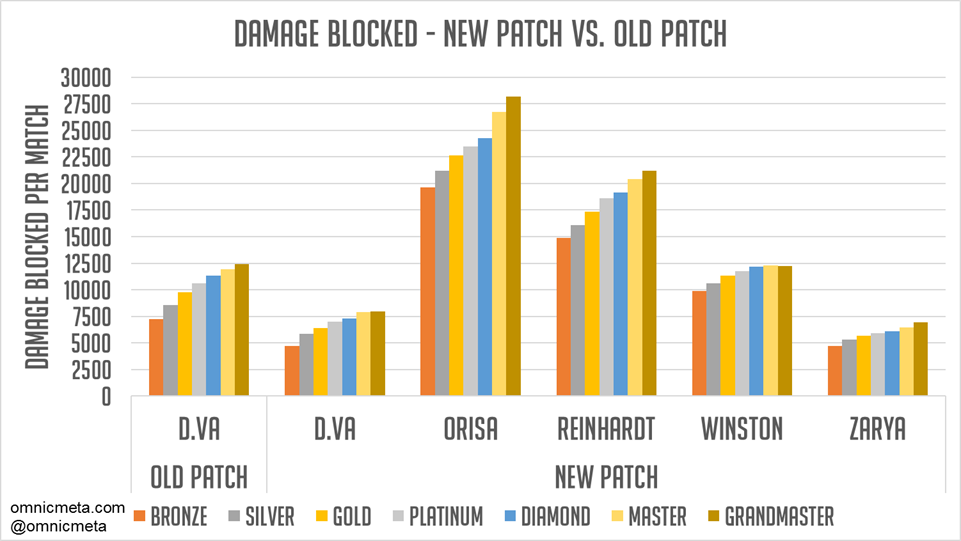 Arguably the biggest change to D.Va this patch is to Defensive matrix.  Doubling the shield depletion rate (while increasing the charge rate by  25%) is a massive change - that translated nearly directly to D.Va's ability to soak damage.  Old D.Va used to post solid damage blocked numbers similar to Winston and way above Zarya.  Patch 1.15 has changed D.Va to have some of the lowest damage blocking numbers in the game - and very close to Zarya.  With a 33% drop in damage blocked across all tiers, it seems that the changes have shifted D.Va over to even more of an off-tank role.  While many players will certainly comment that the main utility of Defense Matrix was to negate offensive ultimates, it seems clear that D.Va also has suffered greatly in that capacity as well.

Interestingly, D.Va's survivability doesn't seem to have changed much.  Despite the 33% drop in damage blocked, her deaths per competitive match have only gone up 5% on average across the tiers.  Similarly, D.Va is being de-meched 8% more than before.  Overall, players seem to have quickly learned how to stay alive despite having much less defensive capability.

Impact on the Game: Damage Dealing and Self-Destruct 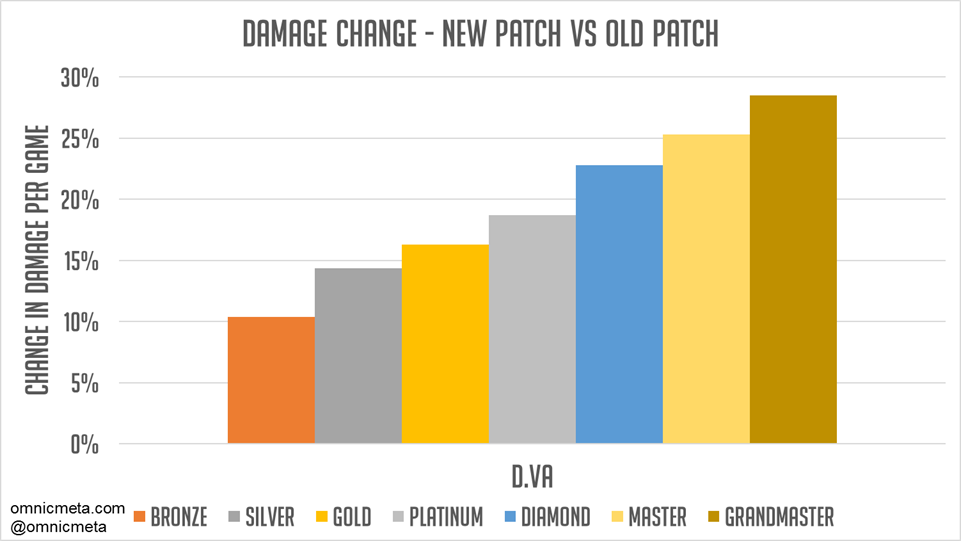 If we look deeper, we see plenty of evidence that D.Va's skill cap has increased - particularly in how damage output has changed.  The new Micro Missiles and ability to shoot while flying take considerable skill, and higher tier players are taking much more advantage of the changes.  While Bronze players are only able to squeeze an additional +10% damage out of D.Va's new kit, Grandmaster players are getting an additional +28%.  In other words, the offensive changes are not a flat damage increase across the board - skill is definitely required to maximize this new part of D.Va's kit. 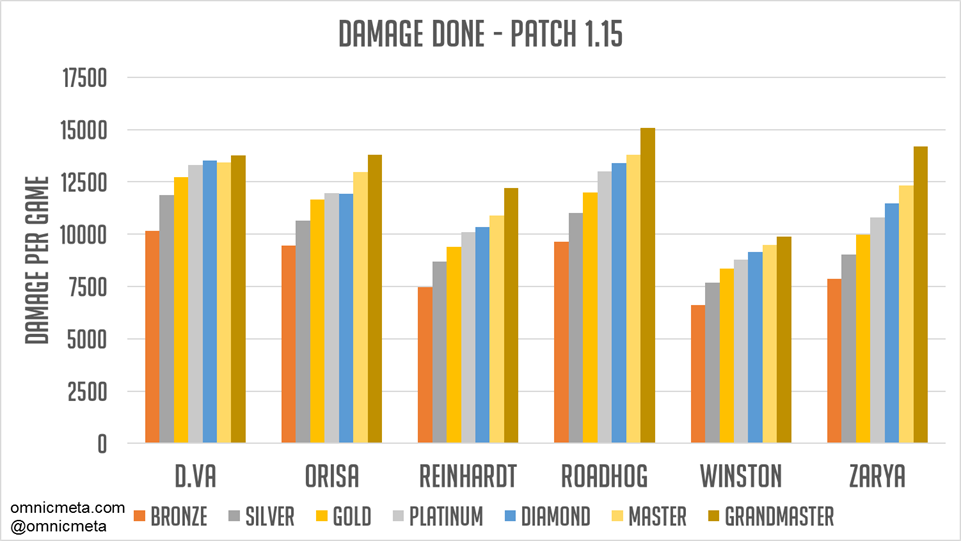 So how do these increases in damage output compare with other tanks?  Incredibly favorably, actually.  D.Va now has the highest damage per match out of any tank in Tiers Bronze -> Diamond, and is easily among the top in Master and Grandmaster.  In fact, D.Va now does more damage than 5  Offensive heroes (out of 8).  This damage clearly pushes D.Va into more of an off-tank role, where maximizing her damage and getting picks are more of a focus.

A big question is if the increase in damage has translated to eliminations.  While not shown, D.Va's eliminations have increased dramatically - Bronze: +5%, Silver: +8%, Gold: +10%, Platinum: +11%, Diamond: +13%, Master: +15%, and Grandmaster: +14%.  This is good news, as it means that D.Va is securing kills with the additional damage output, and isn't simply feeding enemy ultimates. 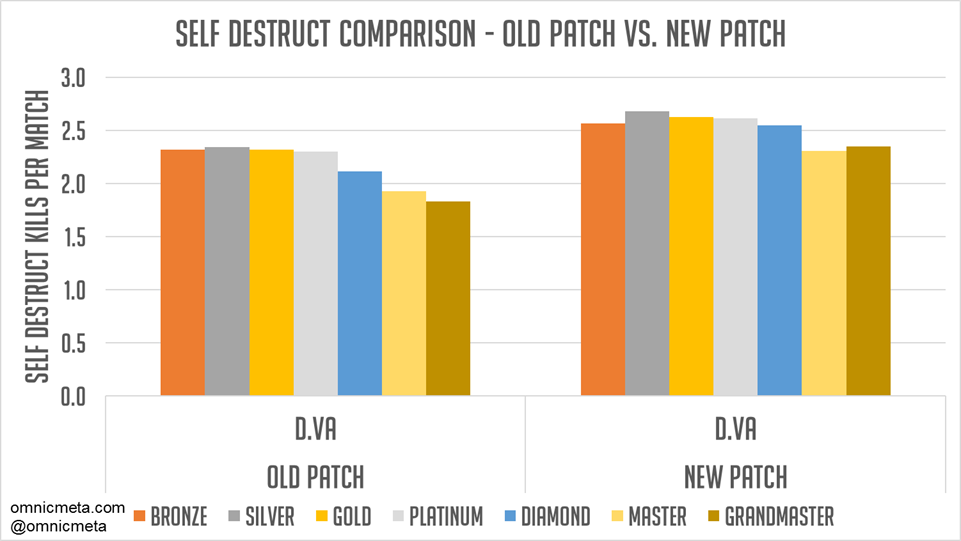 It turns out that with the changes, D.Va players are "popping ult" much more successfully.  Across the board, D.Va is getting 15% to 20% more Self-Destruct kills per match.  This points to players more often firing off their ultimate, as it seems unlikely that D.Va is simply catching more people with Self-Destruct.  This could be due to a number of factors, including D.Va players valuing kills over blocking damage or the damage increase allowing ultimates to charge faster.  Whatever the reason, D.Va's ultimate is having much more utility this patch. 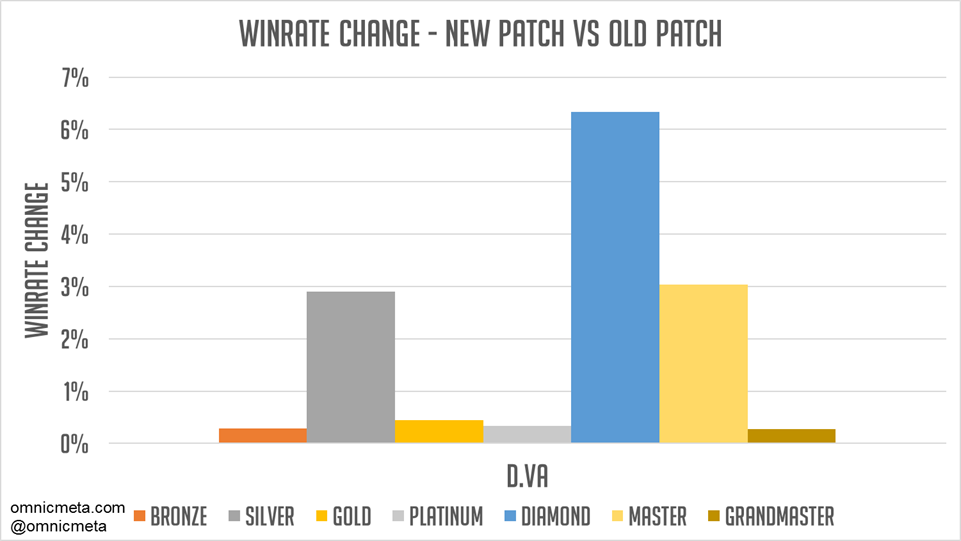 So how has the huge D.Va rework affected her success in ranked play (winrate)?  Most tiers saw little change, but Silver (+3%), Diamond (+6%), and Master (+3%) saw a significant increase in winrate.  This data points to the fact that the new D.Va is not overpowered, nor is she underpowered.  The patch is simply a shift in role for the rocket-propelled hero.  However, one thing is clear: as time goes by D.Va's position in the meta will continue to shake out. 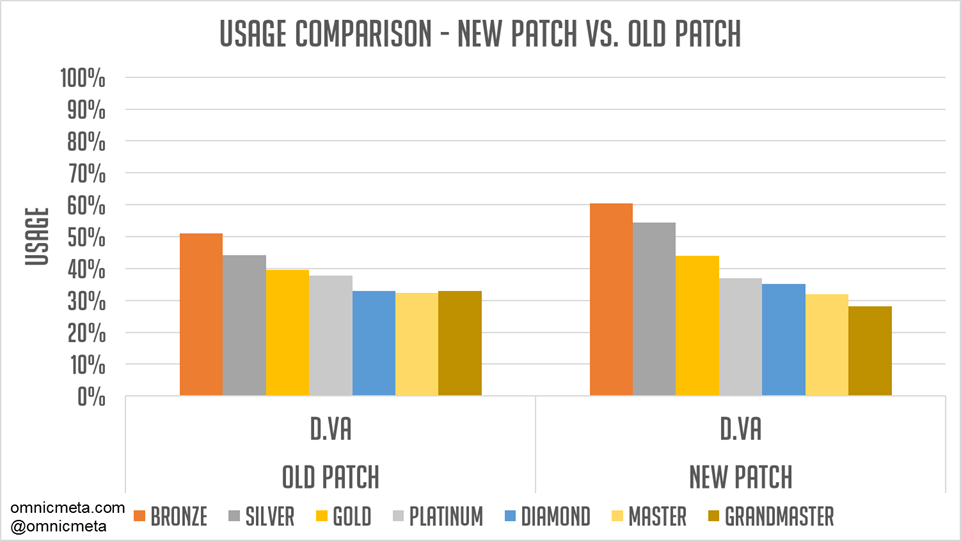 After Mercy reached nearly 100% pickrate (jumping 50% usage in some tiers), some players commented that this was simply because the Overwatch community "wanted to try her out", and not due to her increased strength as a hero.  So what about for D.Va, whose kit has been tuned to reduce her ability to block damage and increase her ability to deal damage?  From the chart above, it turns out that players are not flocking to D.Va as they did to Mercy.  In Bronze -> Gold tiers, we see a modest increase in usage, while for Platinum -> Grandmaster tiers we see a decrease in D.Va play after the patch.  This usage data points to the idea that the community isn't extra impressed with the new D.Va (and on the flip side actually helps reinforce the idea that Mercy is very strong right now).

D.Va has seen a big shift in role with Patch 1.15.  She no longer is the damage soaker that she used to be, and instead is dishing out more damage and kills than ever.  While her winrates have somehwat improved, the community seems split on what they think of the changes - she has not gained or lost popularity.  When the dust settles, will D.Va maintain her strong position in the meta as one of Overwatch's most popular heroes?  Only time will tell for sure.