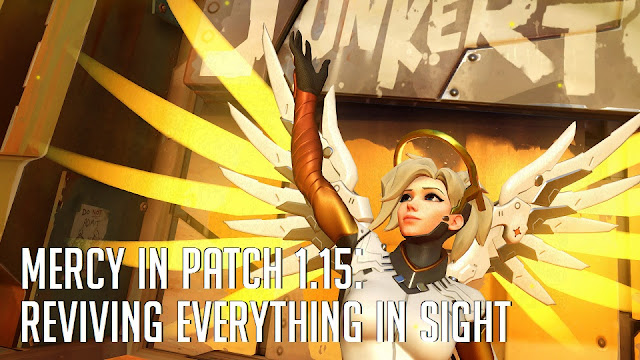 Patch 1.15 has been live for just a few days, and already players are noticing huge differences in their games.  Notably, Mercy received a huge overhaul - shifting resurrect to a regular ability and giving her a new ultimate.  In this article we dive deep into how the changes have affected Mercy from a data analysis perspective.

Patch 1.15 had some huge changes to the most popular Overwatch hero - Mercy. To summarize, Resurrect moved to a single-target Regular ability on a 30 second cooldown, with the range reduced to 5 meters and Mercy no longer being invunerable during the ability.  Mercy also received a new ultimate ability (Valkyrie), which enables her to fly, buffs her self healing, healing, damage boosting, and reduced the cooldown on Resurrect to 10 seconds.


These changes are absolutely massive, especially considering Mercy's role as one of the core heroes in Overwatch.  We dive into how the changes have affected the key ways Mercy impacts competitive matches by looking deep into resurrections and healing.  We also look at how the changes have affected Mercy's winrates and usage rates.  The data represents current PC play, while Console play is very similar.


Impact on the Game: Resurrect as  Regular Ability 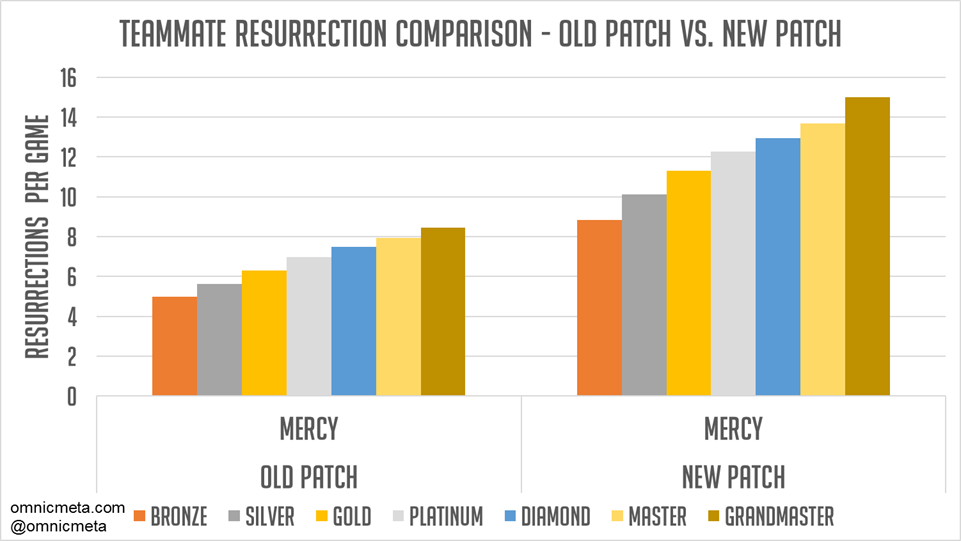 The above chart show the old patch (left) compared with the new patch (right) for each tier.  To say the least, the changes to Resurrect have made it an incredibly strong ability compared with before - and possibly overpowered.  Across every single tier, Mercy has nearly doubled the amount of teammates resurrected per match - which is absolutely mind boggling for an ability that is considered by many players to be one of the strongest in the game.  On average, Resurrects are up 80% across all competitive tiers of play, despite the added risk of Mercy no longer being invulnerable while rezzing (and also needing to be only 5m away).  What percent of these resurrects is during Valkyrie ultimate is unclear, but it currently seems likely that the shorter cooldown during Valkyrie is at least partly responsible for the massive increase in resurrects.  I will leave it up to the readers to decide what they think of this massive boost in Resurrections. 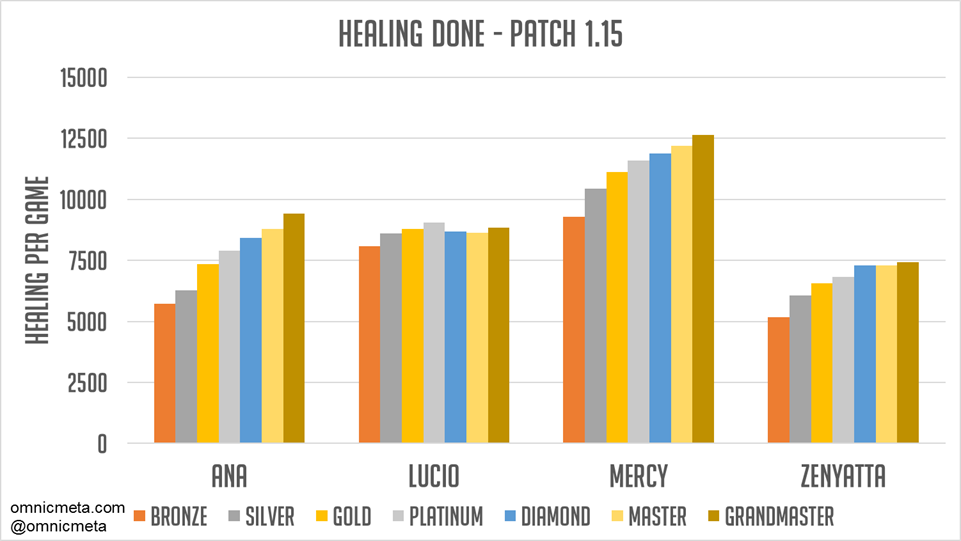 Meanwhile, Mercy remains the absolute leader in dishing out healing to teammates, with at least 50% more healing done per game than any other support hero in the game.  In fact, her healing per game has gone up 7% on average since Patch 1.15 hit live servers, while other support heroes saw little or no change.  One of the more promising Mercy changes in Patch 1.15 was that she was no longer invulnerable while rezzing, which appeared to point to new risk/reward decision making for Mercy players.  However, this does not seem to be the case looking at the data.  In fact, Mercy's deaths per game remains nearly the same as before.  Overall, Mercy is much stronger than ever before. 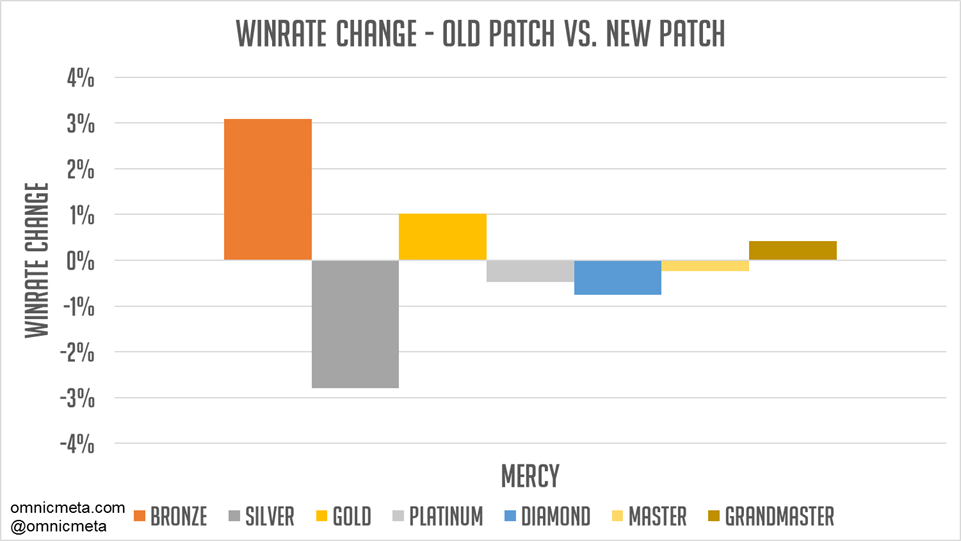 So with Mercy's buff, how has it impacted her winrate?  Simple answer: it hasn't.  While Bronze and Silver tier see some minor changes in Winrate,  most tiers essentially see no change at all.  While this seems strange, it turns out that there is a reasonable explanation for this, easily seen in the next chart. 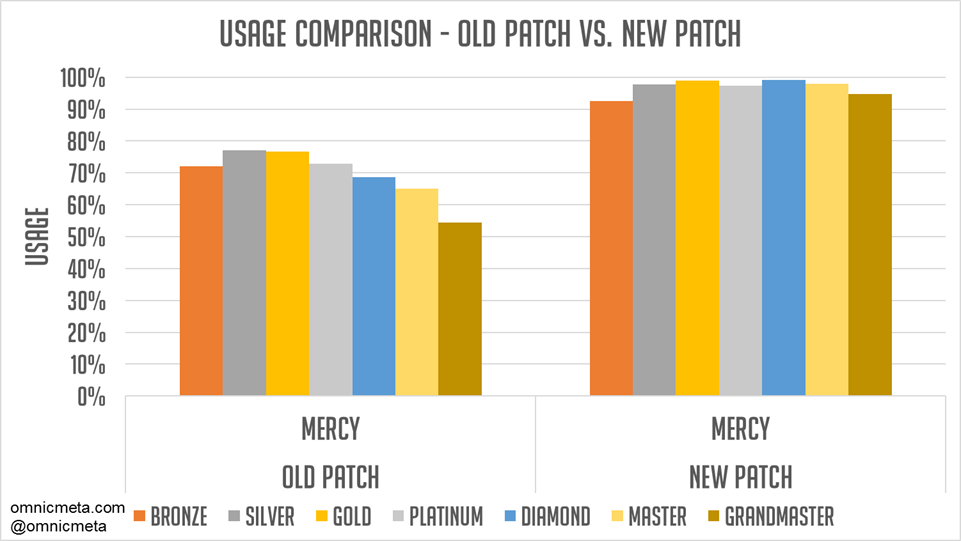 Why hasn't Mercy's winrate changed?  Because there is a Mercy on every team now.  Looking at usage above, Mercy is being picked nearly 100% of the time regardless of tier.  If you are playing competitive Overwatch there will be a Mercy on your team.  Given the near 100% pick rate, its clear this is not simply fascination with the new changes - Mercy is indeed an incredibly strong hero, and possibly overpowered in her current state.


Summary: Mercy, the Most Overpowered Hero in Overwatch?

Just looking at the numbers, Mercy is definitely much stronger than ever.  The massive 80% buff to Resurrect with seemingly no penalty or added risk has had a even larger impact on competitive Overwatch.  Time will tell if Blizzard will nerf Mercy in response, or whether the Overwatch community will have to learn to play around the big changes.  Either way, at the moment Mercy is absolutely a must pick.