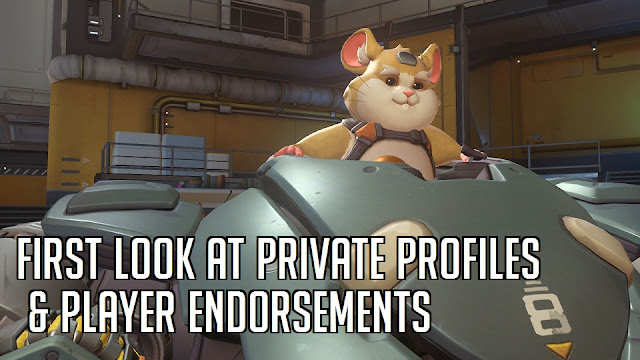 New with Patch 1.25 are two new Social features: Private Career Profiles and Player Endorsements.  Along with the new looking for game features, these two features have made Overwatch (and competitive Overwatch in particular) look much different in Season 11 than in season's past.  In this article, we take a first look into the impact of each feature from a data analysis perspective.  As always, I hope you enjoy this article!

With Patch 1.25, Blizzard added the ability to hide your career profile from others, enabling players to choose who can see their SR, their time played on heroes, their winrates, and other important statistics.  There are actually three possible settings when it comes to career profile privacy: "Private", "Friends Only", and "Public".  In the case of both "Private" and "Friends Only" settings, no public viewing of player career data is possible.  That means that players on your team or the enemy team will not be able to see your data - and neither can any of the Overwatch player statistic websites and apps (including OmnicMeta).

With that said, let's look at the data: 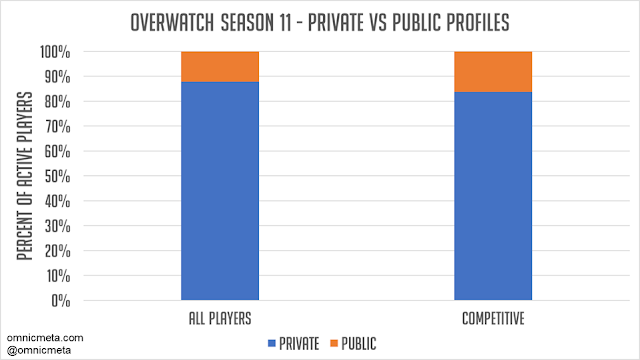 The chart above shows the break of players with private and public profiles.  All players in my dataset include both quickplay and competitive modes, while I also have broken out the players that play competitive.  Overall, about 12% of players have public profiles, while 16% of competitive players have public profiles.  In other words, only 1 in 6 players in competitive have public profiles currently.  There are a number of possible reasons why the number of players with public profiles is so low, but the most apparent reason is that "Friends Only" is the default setting.  Many players may not even be aware that their profile is not visible by their teammates.  Anecdotally, this seems to be the case as I've heard many stories from the community where their teammates are surprised to find out their profile is private.  From my perspective, making private profiles should be an option, and not default behavior - there likely is only a small number of players that want to have their data kept private.  In any case, 84% of competitive players with private career profiles is shocking (especially considering that private profiles prohibits the use of Overwatch stats websites).

Allowing players to endorse their teammates is the first "positive reinforcement" feature that Blizzard has added to the game.  The feature allows a player to commend a teammate for "shotcalling", "sportsmanship", and being a "good teammate".  After a match ends, the endorser can select three players per match to commend, choosing between those three categories.  One of the end goals with the system is to encourage better player behavior and therefore reduce toxicity.  While it remains to be seen how successful this feature is, it appears to be heavy used so far in Season 11.

Now onto the data - which focuses in on competitive players. 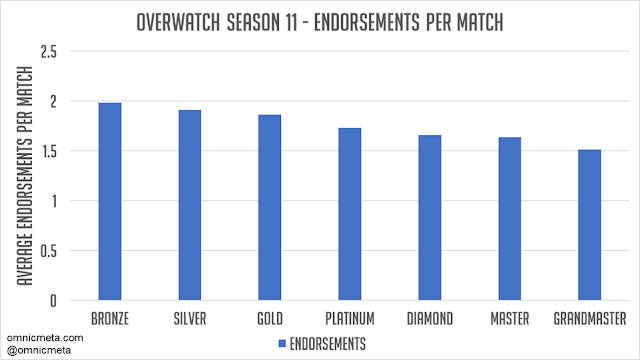 The figure above show the average commendations per match among competitive tiers Bronze through Grandmaster.  First, it's worth mentioning that the average endorsement level is between Level 1 (44%) and Level 2 (52%) currently.  Many players have been able to get some games in for Season 11, but the season is still young.  That said, there are a small percent (<1%) of Level 4s and Level 5s in the game right now.  Looking at the chart, players are receiving between 1.5 and 2 endorsements per competitive match right now.  Interestingly, the higher tiers are much less interested in the feature, as Grandmaster players receive 32% less commendations per match than Bronze players. 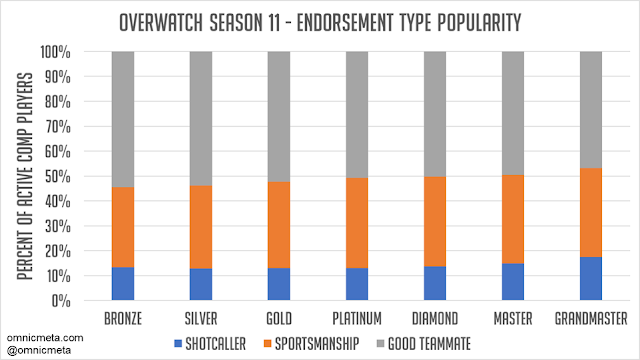 The final chart on endorsements looks at the breakdown of which endorsements are being given from the three possible options.  On average, the "good teammate" endorsement is given out 51% of the time, "sportsmanship" 35% of the time, and "shotcaller" 14% of the time.  Shotcalling in particular seems to be the one endorsement that requires skill and active communication - which is perhaps why it is so rare.  Interestingly, the higher tiers give out the "shotcaller" and "sportsmanship" endorsements  slightly more often than the other tiers.  This makes sense as community knowledge says that shotcalling is more important and prevalent at the highest tiers of play.  On the other hand, commending for sportsmanship more often at the highest tiers may reveal that players are attempting to use positive reinforcement to reduce toxicity.

Both Private profiles and the player endorsement system have had a huge impact in Season 11 so far - as clearly demonstrated by the data shown in this article.  While community reception remains mixed, (even I wish that the default setting was public profiles),  the vast majority of players are keeping their data private.  On the other hand, the endorsement system is seeing a ton of use with more than half of all possible endorsements being used.  For both these features, it remains to be seen what the future holds.  I fully expect the number of public profiles to steadily increase throughout the season as players care less about their statistics (or become aware of the feature), while the number of endorsements may likely go down.  Either way, I'll be keeping watch over what happens with both these features.  Until next time!

Check Out These Other Articles
PC Hero Meta Report for June 25, 2018
Top Hero Mains in Season 10