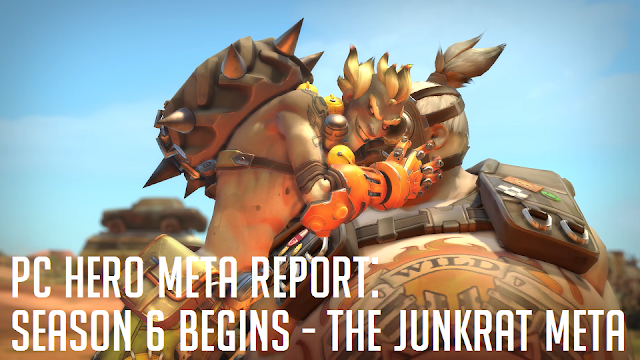 Was the Junkertown map reveal an omen things to come?  With Junkrat claiming his place at the top of DPS and Roadhog coming back in the meta, it certainly seems so.  There continue to be major shakeups in the meta as it evolves - and just as Season 6 has started.

This report has new content!  Below each Competitive Tier (Bronze / Grandmaster) breakdown are the Top 5 heroes for the report - ranked by winrate.  The list only includes heroes that are being heavily played - at least 25% usage.  These five heroes are among the strongest in the game currently.

Season 5 in Review: Comparing US, EU, and Korean Meta
Click Here for the Console Hero Meta Report for August 22, 2017 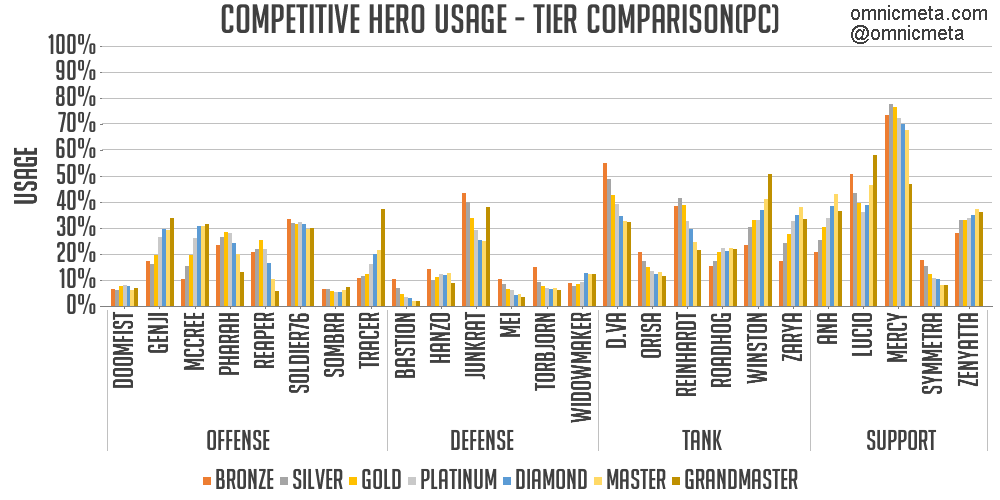 The biggest story this report is Junkrat - who explodes to become the #1-#4 most popular DPS at every tier.  The biggest surprise?  Grandmaster, where Junkrat is #1.  While he used to be a niche pick at most tiers, his buffed buffed Rip-tire and Double Concussive Mines are being very well received by players.  His winrates have also spiked are and among some of the highest in competitive Overwatch.  Whether this sudden rise in popularity will be a continuing trend or simply a fad remains to be seen.

Speaking of fads, Doomfist's usage has completed crashed - he has tanked nearly 20% on average and is now niche.  He was the flavor of the month right after his release, but nerfs to his Rocket Punch's hitbox and increases in counter play (McCree) have seemed to have sealed his fate.  He is still being played in limited situations, but it will likely take the influence of top-tier pro players to bring his popularity back.

Patch 1.14 has also been extremely kind to Roadhog.  He buff to his healing - allowing him to move and take 50% less damage has been a big buff.  His usage has surged back, as have his winrates - placing him clearly in the meta for most tiers.  He still is about 20% usage off his peak before his One Shot Combo nerf, but he seems to be coming back now.

Speaking of Tanks, the decline of Winston and D.Va continues.  Their usage continues to fall sharply, as does dive team compositions.  With D.Va's major nerf to Defense Matrix coming soon, we may see even less of her being played as a main tank.  Currently, both Reinhardt and Orisa are seeing quite a bit more play - and appear ready to take her place.  Reinhardt is once again a big part of the meta at all tiers, while Orisa is niche.

Finally, Support play hasn't changed much yet, as Mercy remains at the top.  However, Ana has significant increases in play this week, particularly at Masters (+5%) and Grandmaster (+3%).  Seeing such increases in play after months of decline is a good sign for a changing meta, especially as big Mercy changes are looming.

The biggest movers this week are the beneficiaries of Patch 1.14 buffs.  Junkrat was only very popular in Bronze and Silver tier historically, but now with his buffed Rip-tire ultimate and double Concussive Mines, he has completely surged.  He is now one of the most popular DPS heroes in the game, and the #1 DPS hero at Bronze, Silver, Gold, and even Grandmaster.  Time will tell if his popularity stays, but during the start of Season 6 his usage has been explosive.  The other big mover this week is Roadhog.  After being nerfed into the ground with Patch 1.12,  his Patch 1.14 buffs that allow him to run while healing (and take 50% less damage) are a welcomed change.  It appears as though that change has brought him back into the meta in all tiers.

The biggest surprise by far is the collapse of Doomfist's usage.  After his introduction a few weeks ago, he was red hot ("overpowered") and prominently played in every tier.  Now, with his "OP" Rocket Punch hitbox nerfed greatly and increased competition from other DPS heroes (even Junkrat), Doomfist is looking like a niche hero played on certain points and maps (if at all).  With him still seeing play in the professional scene, it is possible that he can make a comeback, but for now he is one of the least played heroes in the game.  Winston is the other big loser this report, continuing his month-long fall from being one of the most played heroes in the game.  His decline comes with the rise of Orisa, and (buffed) Roadhog, whom he doesn't match up against well. 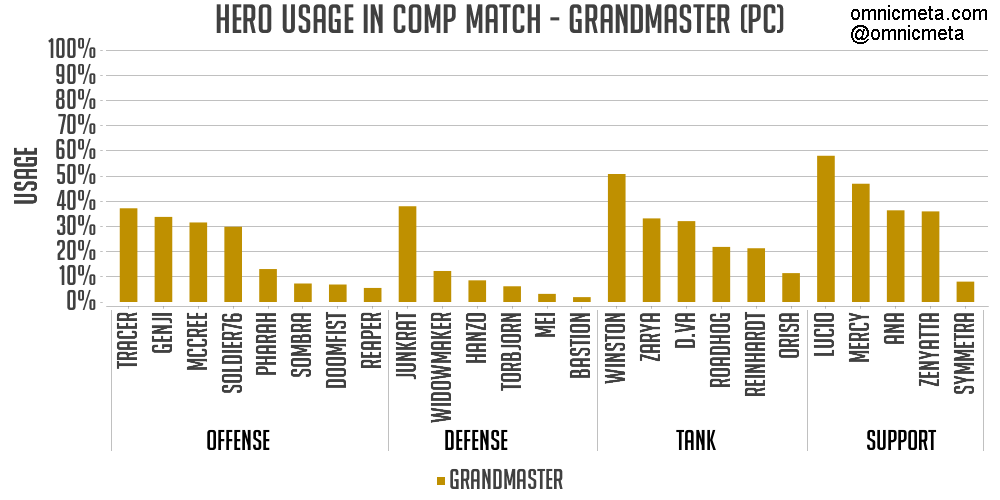 I'm certain that Grandmaster's thought they would never see the day where Junkrat was a consistently picked DPS - but for the start of Season 6, he is the #1 DPS.  There is a very clear meta for DPS heroes in Grandmaster - Junkrat, Tracer (-7%), Genji (-11%), McCree(+2%), and Soldier (-10%).  Most of the Offense heroes have fallen this week - mostly to make room for Junkrat play.  For Tanks, there has been huge movement with every single tank.  Right now, Winston (-22%) is in freefall, though still remaining the most popular tank in Grandmaster.  Zarya has eclipsed D.Va (-9%) in play, while Roadhog (+18%), Reinhardt (+5%), and even Orisa (+5%) seeing much more play.  Supports remain somewhat the same, but Mercy has surged +13% usage to solidify the #2 position.  Lucio, Ana, and Zenyatta remain strong fixtures in the support meta.  Note that Ana grew +3% in usage, for the first time in many months. 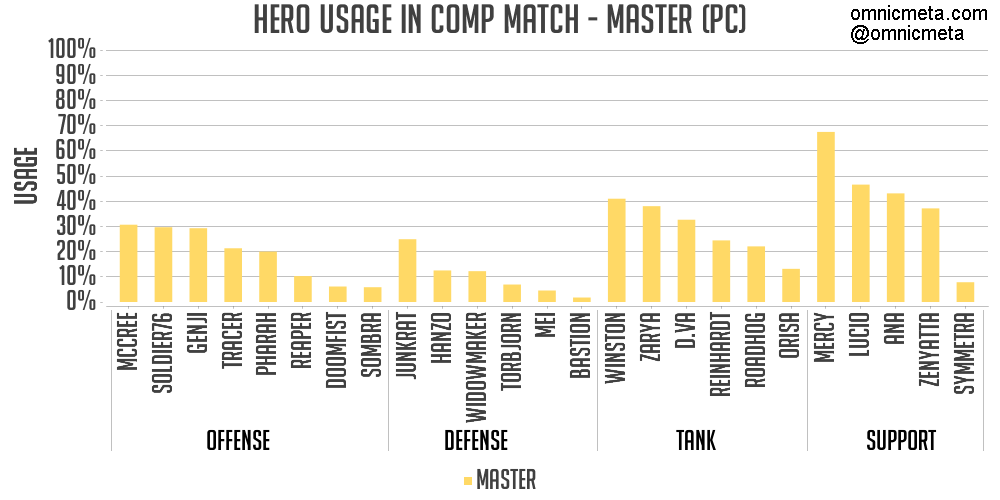 In Master tier, Junkrat (+16%) has emerged as one of the top DPS heroes in the tier.  Besides Junkrat, the biggest shift in the meta has been away from Tracer (-4%) / Genji (-3%) and towards McCree (+6%).  McCree is now the most popular hero in Masters, followed by Soldier and Genji.  Tank play is shifting quickly away from D.Va (9%) and Winston (-16%), while Zarya (+2%), Reinhardt (+5%), and recently buffed Roadhog (+17%) taking their place.  With D.Va's changes to Defense Matrix coming soon, we expect that Reinhardt and Roadhog will overtake her next report.  Support play is seeing some change, as Ana (+5%) has the most significant gains after months of decline.  Both Ana, Lucio, and Zenyatta are competing with #1 support Mercy to round out the support meta. 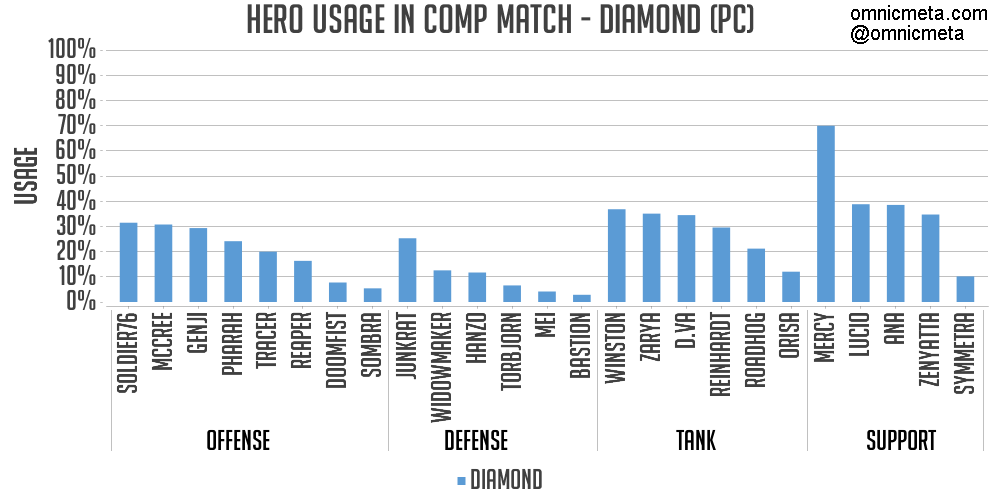 DPS play remains mostly the same, with Soldier (-1%), McCree (-1%), and Genji (-2%) retaining the position at the top.  Junkrat (+16%) is the DPS hero seeing the biggest bump, putting him squarely in the Diamond meta for the first time.  Tank play is also seeing a shift, as D.Va (-10%) and Winston (-12%) continue to fall.  Zarya has no taken the #2 most popular tank slot, and Reinhardt (+4%) is also a solid part of the meta again.  It is possible that Reinhardt and Zarya will be the most popular tanks at Diamond in the next few weeks.  Support play remains mostly unchanged, with Mercy the most popular - followed by Lucio, Ana, and Zenyatta. 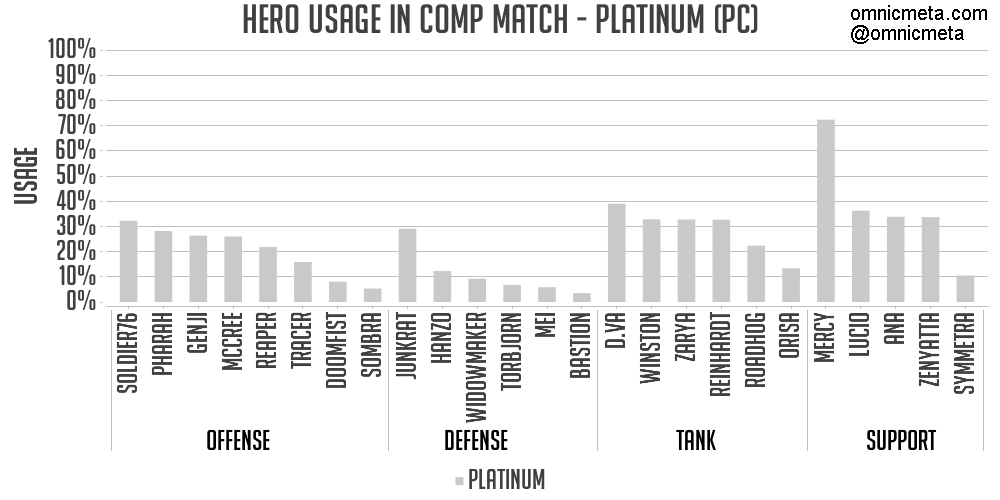 Choices for DPS heroes is very diverse in Platinum at the start of Season 6.  Soldier remains the most popular DPS hero, and Junkrat (+19%) has jumped to the #2 slot, likely at the expense of Doomfist (-20%).  While Pharah, Genji, and McCree maintain their popularity, once-popular Reaper (-5%) continues his decline.  Tank play is also very diverse currently - there are four tanks with near equal play, though the Tank meta is shifting quickly.  D.Va (-6%) and Winston (-11%) continue to fall, while Reinhardt (+2%) and even Roadhog (+15%) see significant gains.  In a matter of weeks, we may find D.Va and Winston lose their popularity even more.  Support play remains roughly the same as in prior weeks, with Mercy the most popular by far.  Lucio, Ana, and Zenyatta round out the support meta at Platinum. 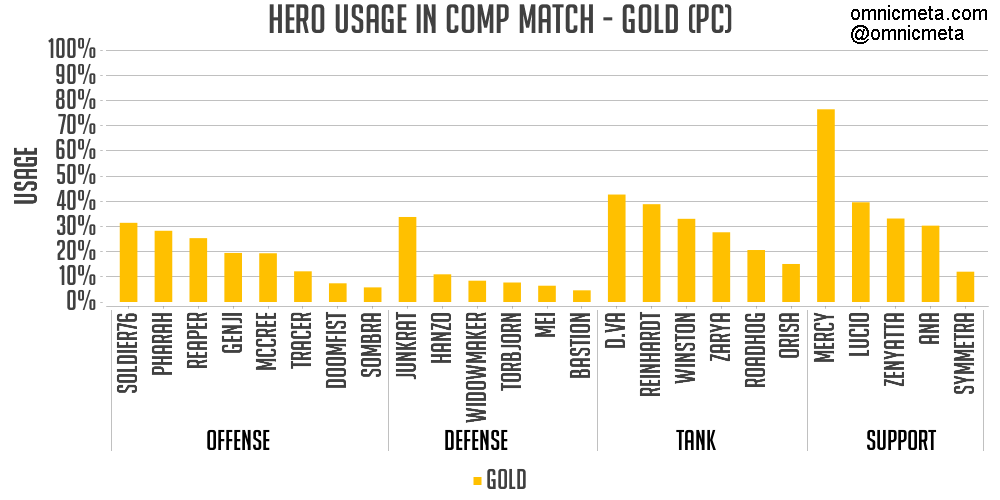 For the first time, Junkrat (+17%) is the most popular DPS hero in Gold tier, overtaking Soldier (-2%), Pharah (-1%), and Reaper (-3%) in the process.  Genji and McCree round out the popular DPS heros in Gold.  Tank play is in the middle of a meta transition, as Reinhardt (+3%) continues to overtake formerly popular heroes  D.Va (-5%) and Winston (-6%).  We expect that Reinhardt will be the most popular Tank hero by far next report.  Similar to other tiers, Orisa (+4%) and Roadhog (+12%) are also starting to find their way into the Tank meta.  Support hero play in Gold remains similar to the last report, with Mercy being a near must pick, followed by Lucio, Zenyatta, and Ana. 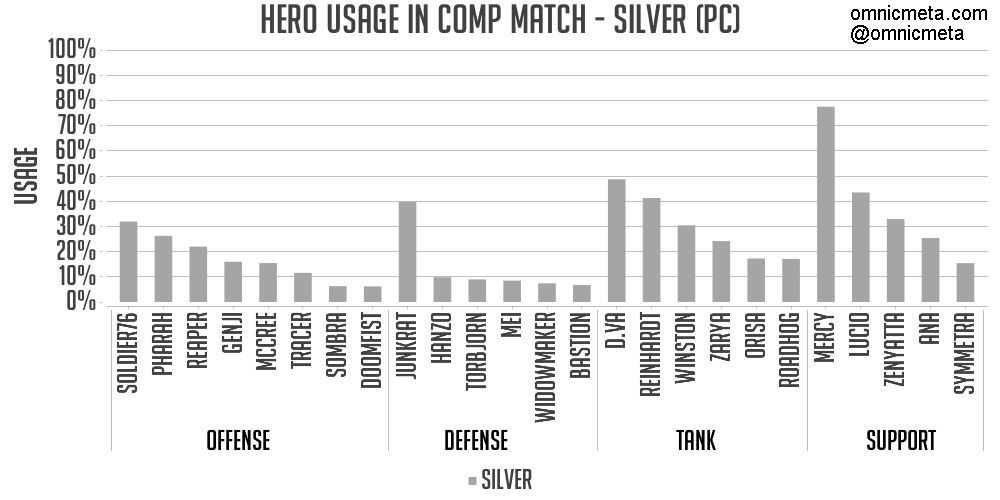 In Silver, Junkrat (+15%) has surged and become the most popular DPS hero by far.  Soldier (+2%), Pharah (-4%), and Reaper (-1%) are the other DPS heroes that are being played consistently, while formerly popular Doomfist has fallen -20% into niche tier.  For Tanks, Reinhardt (+3%) continues to grow in usage while D.Va (-3%) and Winston (-6%) fall.  Zarya (+2%) rounds out the four most popular tanks.  However, both Orisa (+4%) and Roadhog (+8%) are seeing much more play, and may shake up the Tank meta in the near future.  Support play remains mostly unchanged, as Mercy remains the #1 most popular hero at Silver by far.  Lucio and Zenyatta the the most common choices for the #2 support slot. 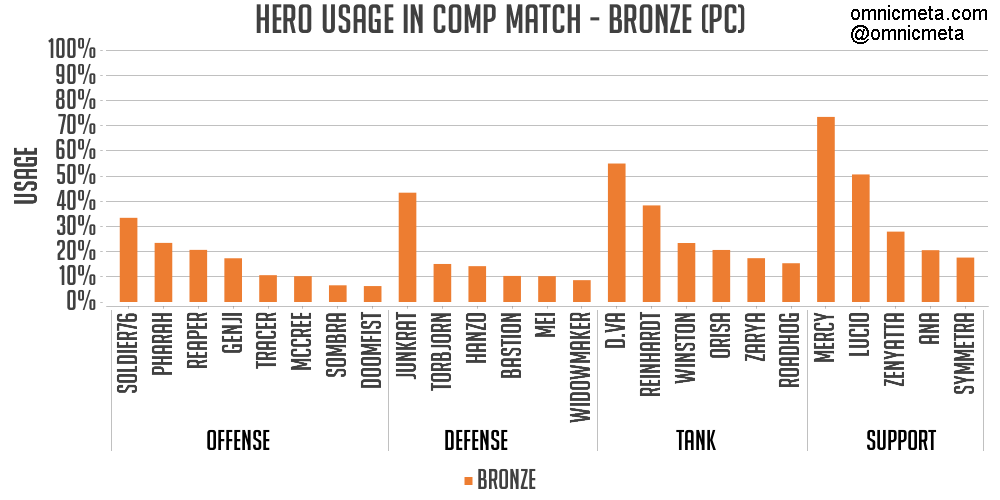 Junkrat's rise in Bronze has solidified his place as the #1 DPS and #4 most popular hero in Bronze.  Soldier (+2%) remains the clear #2, followed by Pharah (-3%), Reaper, and Genji (+1%).  Those five heroes are the meta fixtures for DPS.  Other big DPS movers include McCree (-5%) and Widowmaker (-6%), who have fallen out of the Bronze meta.  Tanks remain mostly unchanged, with D.Va (+3%) and Reinhardt (+1%) being the most common by far.  Roadhog (+8%) has greatly increased in play, but is not yet a big fixture in the meta.  Mercy (+2%) remains the top hero overall in Bronze, and Lucio (+6%) has made big gains this report as well.  Symmetra (-5%) has fallen greatly for the first time in months, and is now the least-picked support hero in Bronze.


Check Out These Other Articles
Season 5 in Review: Comparing US, EU, and Korean Meta
Click Here for the Console Hero Meta Report for August 22, 2017