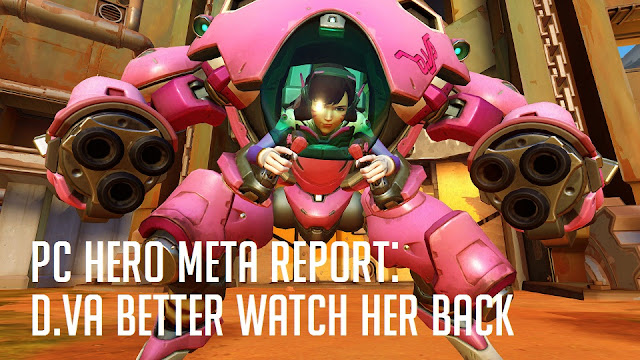 Patch 1.14 was a big patch - Junkrat has become a top DPS pick, Roadhog is (mostly) back, and tank play continues to shift away from dive heroes.  Even so, the meta is currently at an inflection point, that hinges squarely on the Patch 1.15 changes to Mercy and D.Va - two of the most popular heroes in competitive Overwatch.  Such major hero changes shift the gameplay of the two heroes greatly, and will no doubt shake up the meta.  D.Va in particular may see some huge changes in her usage.  While we await the impact of Patch 1.15, there are some new and continuing trends to the meta as it exists today.

This report has new content!  Below each Competitive Tier (Bronze / Grandmaster) breakdown are the Top 5 heroes for the report - ranked by winrate.  The list only includes heroes that are being heavily played - at least 25% usage.  These five heroes are among the strongest in the game currently. 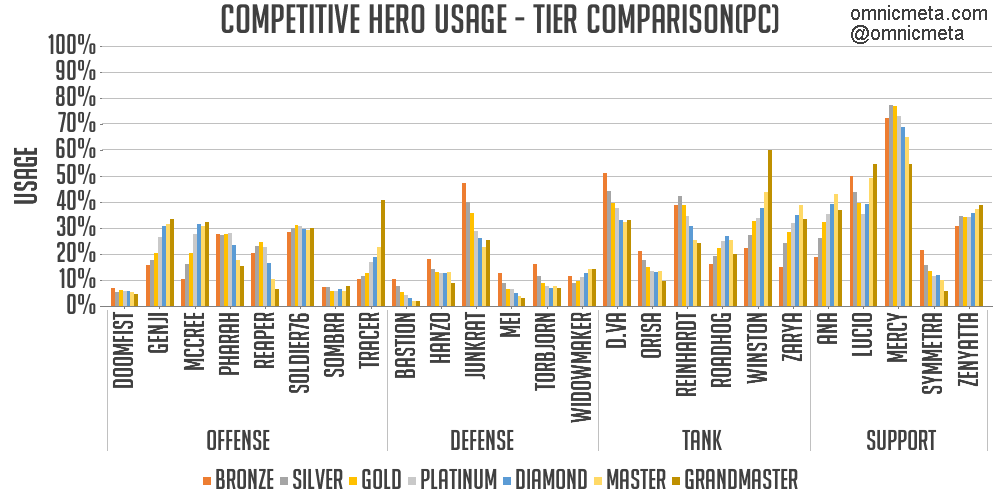 The Junkrat meta continues - and his popularity clearly not a fad.  Since the beginning of Season 6, junkrat has come into his own as one of the most popular heroes in the game.  The changes to Rip-tire and Double Concussive Mines are clearly a huge buff, and have attracted a big following.  Looking at each competitive tier (found below), Junkrat's winrates continue to be some of the very best in the game.  Were the buffs too much?  Is he "OP"?  It's hard to tell, but at this particular moment in time, Junkrat is a character that deserves some respect in competitive play.

A somewhat surprising trend is the slow fall of Soldier.  Once a "must-pick" and the top DPS play at all tiers, his slow descent over the last few months has started to take a toll.  While still arguably one of the best heroes - with self healing, sustained damage, burst damage, mobility, and a great ultimate - players apparently seem to be finding fun and success in other heroes.  While his winrates are competitive with other heroes, they are at the tier average (or even just below).  In other words, there are other heroes finding more success at the moment.  Whatever is happening,  there are arguments for why Soldier is a great pick right now, and why other heroes are a better alternative.


Tanks in general continue to be heavily played.  With the fall of dive team compositions, Reinhardt has settled into a strong position as one of the most popular tanks at lower tiers.  Similarly, the self healing buff in Patch 1.14 continues to help Roadhog.  He appears to have settled as a viable pick in the current meta, as his usage is slightly up overall this report. Winston decline over the past few months has essentially stopped, and he is now the tank most preferred in higher tiers of play.

As a continuing trend, D.Va has fallen in usage. It's clear that D.Va is falling out of favor, and with the major nerf to Defense Matrix now on live server, it appears that she will lose even more popularity.  Her role from being a main tank is shifting as she loses shielding capabilities in exchange for more offensive abilities.  D.Va's place in the meta is certainly a big item to watch, as is the tank that will potentially take her place (Zarya, Reinhardt, and even Orisa are possible beneficiaries).

Finally, there appears to be a "calm before the storm" as Support play has not seen much change.  The big Mercy changes are now live, and we are waiting to see what will happen.  Will the changes to Resurrect really hurt Mercy and bring Ana back into competitive play?  Or, will the changes make Mercy even more of a must pick?  With only a day of play so far, there have been mixed responses.

Looking across the Top 2 biggest gainers this week, we see that heroes in general haven't seen large changes in popularity the past two weeks.  As a result, there is no single hero that stands out among the crowd.  Continuing from last report, Roadhog generally continues to gain popularity, albeit more slowly.  Defense heroes and niche heroes in general are up, as players are playing Hanzo, Torbjorn, Widowmaker and Symmetra more.  This behavior may indicate the tip of a settled meta - but as the D.Va/Mercy patch is now live, we may see big changes in the near future.

The big loser continues to generally be D.Va.  With the new patch live that nerfs Defensive Matrix, we may see more of that in the future.  The other hero seeing significantly less play across all tiers?  Soldier (-2% average) , who has fallen from the clear #1 DPS hero in all tiers over the past several months.  Other notable heroes include Junkrat, who falls at the higher tiers (the "experiment" may be somewhat over) and Mercy. 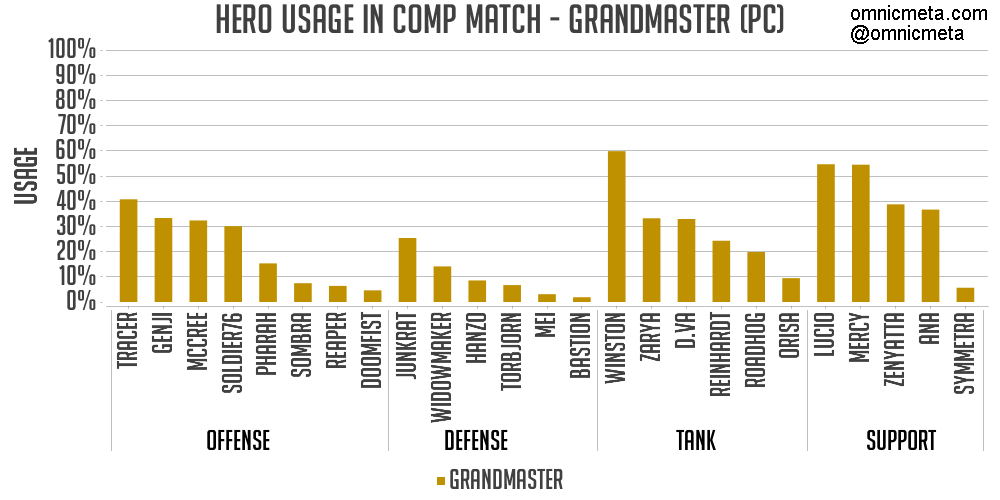 Offense/Defense: After apparent experimentation and briefly reaching the #1 DPS slot, Junkrat (-13%) has fallen back, but is still firmly in the meta at 25% usage.  Tracer (+3%) gains significant play and remains the top DPS hero, while Genji, McCree, and Soldier remain mostly unchanged.  Pharah has seen a small bump of +2%, presumably due to the increase in Junkrat play.

Tank: Winston jumps this week by +8%, further separating himself from the other Tank heroes and partially reverting the decline over the last several months.  Zarya and D.Va remain popular picks, and Reinhardt sees a small +3% bump in play.  Rounding out the meta, Orisa (-2%) and Roadhog (-2%) appear to be the two Tanks that have not caught on at Grandmaster.

Support:  Renewed interest in Mercy (likely stemming from the recent patch) has seen her usage increase by +6%, pulling her even with Lucio (-5%).  Zenyatta (+2%) is still being heavily played, as is Ana - who is still waiting for her moment in the meta. 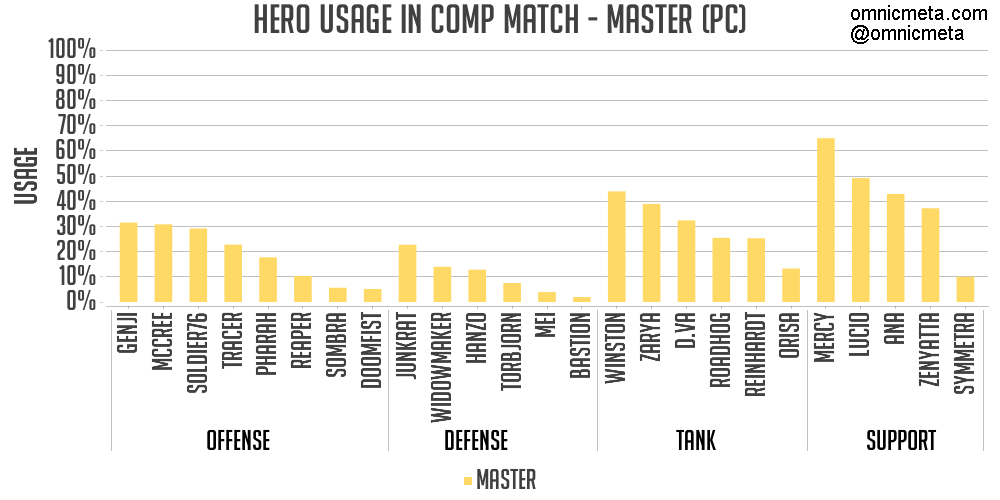 Offense/Defense:  Genji (+2%) leaps over McCree and Soldier to take the top DPS slot, while Tracer moves up +2% to solidify her position in the meta.  Junkrat (-3%) retains his high popularity, but falls a bit this week - as does Pharah (-2%).

Tank: Winston, Zarya, and D.Va are the two tanks most defining the meta currently - which may change as the D.Va Defense Matrix changes just hit live servers.  Winston (+2%) and Roadhog (3%) are the big movers for Tanks, as both grow in importance in the currently meta.

Support: Mercy retains her crown as the most popular hero in Masters, despite losing -4% usage in the last two weeks.  Lucio (+2%) has claimed some of that play for himself, while Ana and Zenyatta remain mostly unchanged. 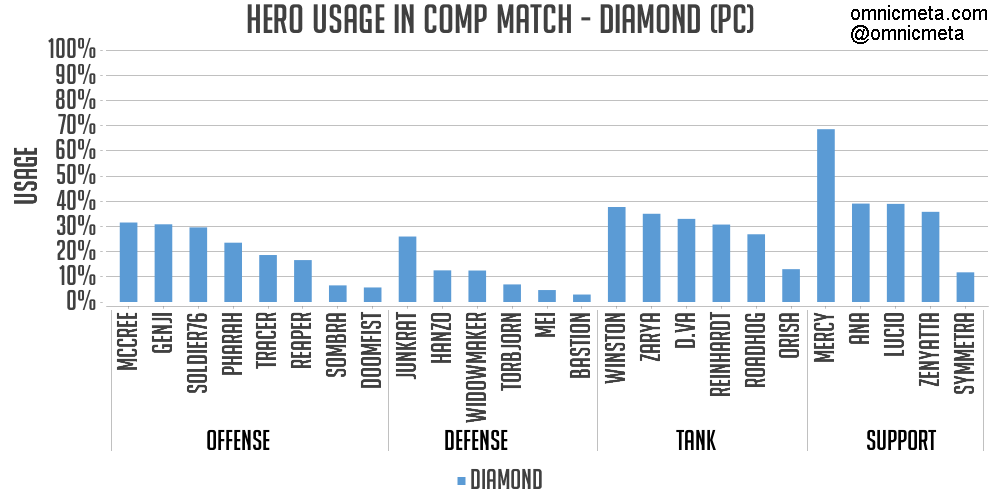 Offense/Defense: With Soldier falling -2% this report, McCree and Genji have jump to the #1 and #2 most popular DPS heroes (by a small margin).  All three heroes are being played above 30% usage, with Junkrat not far behind at 26%.

Tank: After falling majorly last report, Winston maintains his popularity as the most played Tank hero.  Zarya, D.Va (-2%), Reinhardt, and Roadhog (+5% ) round out the 5-strong tank meta current in Diamond.  D.Va continues to fall, while Roadhog has surged in usage, and is once again a big part of the meta at Diamond tier.

Support: Similar to most tiers, the support meta is mostly Mercy (-3%), followed by equally played Ana, Lucio, and Zenyatta. 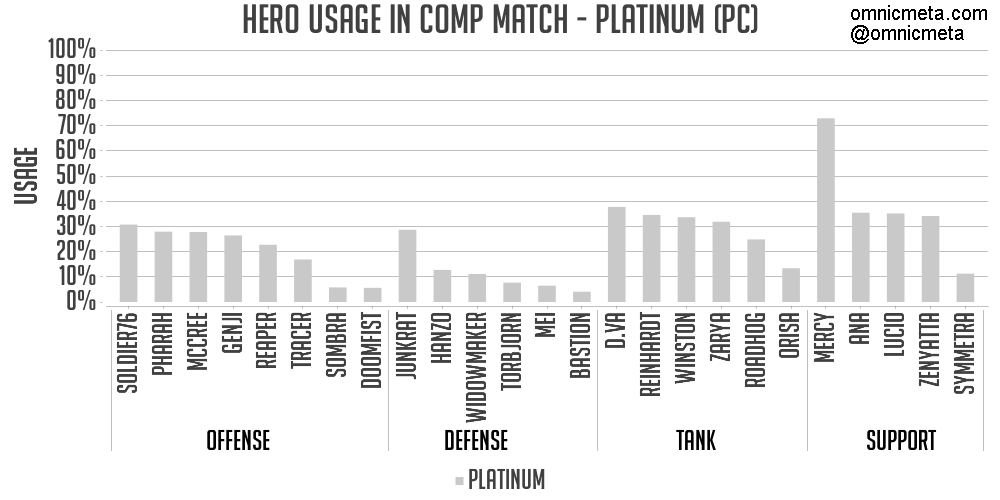 Offense/Defense: Competition is tight for DPS slots in Platinum, as 6 heroes are being played heavily - Soldier, Junkrat, Pharah, McCree, Genji, and Reaper.  McCree (+2%) sees a small uptick in play this report, while Soldier (-2%) falls.

Tank: With D.Va (-2%) continuing her descent, nearly all the tanks are being heavily played in Platinum.  D.Va, Reinhardt, Winston,  and Zarya are all being played above 30% usage, while Roadhog has also gained 2% this report.

Support: Mercy is still being played at nearly double the rate of any other hero in Platinum tier.  For the first time in months, Ana (+2%) overtake Lucio (-2%) to claim the #2 most popular support slot.  Ana, Lucio, and Zenyatta continue to be played at around 35% usage. 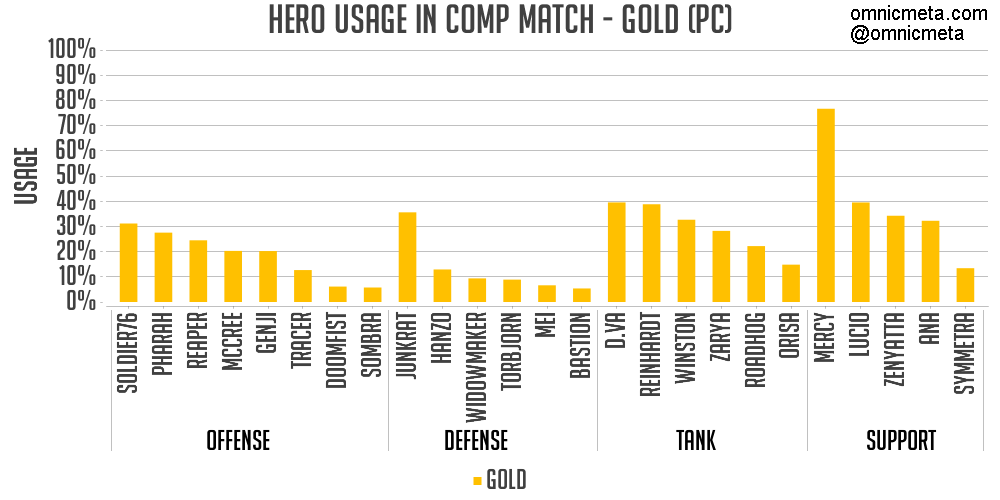 Tank: Competition for Tank play is tight, as the continued decline of D.Va (-4%) has put her even nearly even with Reinhardt.  Both heroes are some of the most popular in Gold tier currently.  Winston and Zarya continue to see significant play and round out the Tank meta.

Support: As usual, Mercy (-2%) is the most popular hero in Gold, and a near always-pick.  Lucio, Zenyatta, and Ana remain unchanged and compete for the second support slot. 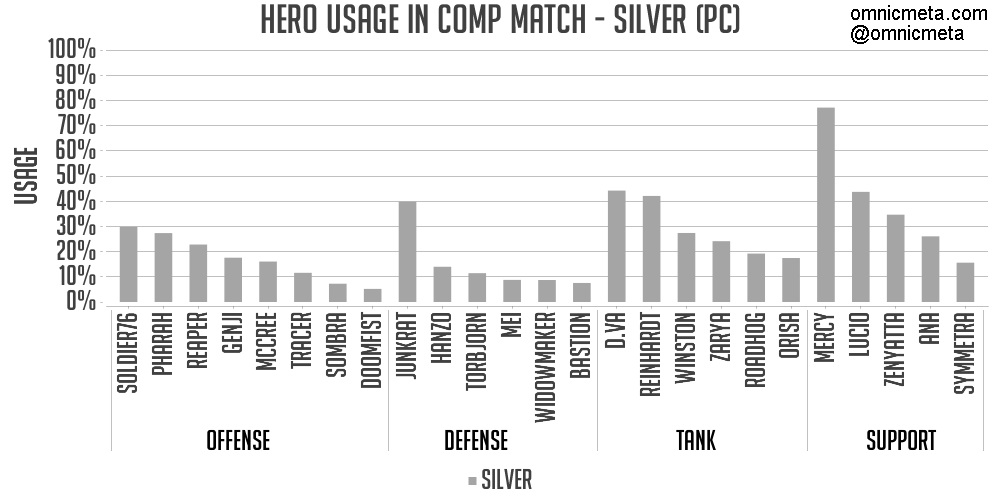 Offense/Defense:  Junkrat continues his Season 6 dominance of DPS heroes in Silver.  He is now in 40% of all teams, with no sign of him losing popularity anytime soon.  Soldier (-3%) and Pharah round out the most popular heroes in the Silver meta.

Tank:  D.Va (-5%) continues to lose popularity, and has almost been overtaken by Reinhardt.  Both heroes are the favorite Tanks in Silver at the moment - at around 40% usage.  Winston (-3%) also continues his fall from popularity - time will tell if the recent 1.15 D.Va changes shift the meta even further.

Support:  Silver support play remains mostly unchanged this report.  Mercy (-2%) is still the most popular by a large margin and nearly in every match.  Lucio, Zenyatta, and Ana fill out the heroes being played in the second slot. 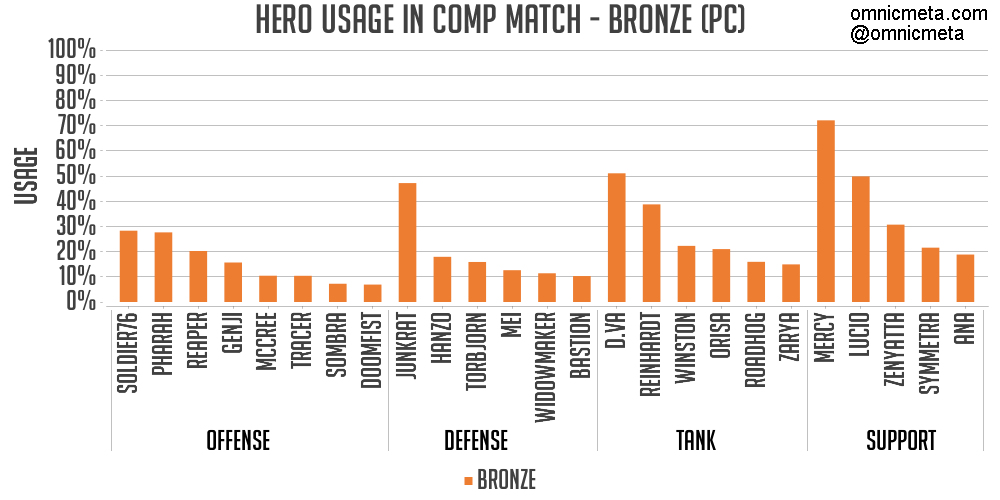 Tank:  D.Va continues to fall quickly, down another -5% usage this report.  D.Va and Reinhardt are the the two most popular tank picks at the moment by a large margin.  Winston (-2%) and Zarya (-3%) continue to fall.

Support:  Mercy (-3%) and Lucio (-2%) continue to dominate support play in Bronze, despite falling a bit in popularity.  Symmetra (+3%) and Zenyatta (+2%) are both up in play this report, with Zenyatta still a big part of the meta.