Orisa is finally here for competitive! Though she has only been available for a few days (and this report covers two weeks), there are still some significant shakeups this week.
The main trends: Winston is back! He is the big winner this week, finally hitting >20% usage in some tiers after gaining more than 10% since Season 3. Mercy usage continues to swell while Ana declines and Bastion usage is slowly returning to pre-buff numbers. Other heroes with Season 4 buffs (Sombra) continue to not see any uptick in play.

What this report is: A report and tier lists for Overwatch hero usage and trends across competitive ladder tiers (Grandmaster -> Bronze), representing data from two weeks of S4 from Americas server. We want to answer the question "What heroes are people playing at each tier? What are the big changes in hero usage?".

What this report is not: We do not report any data from professional or Esports tournaments. 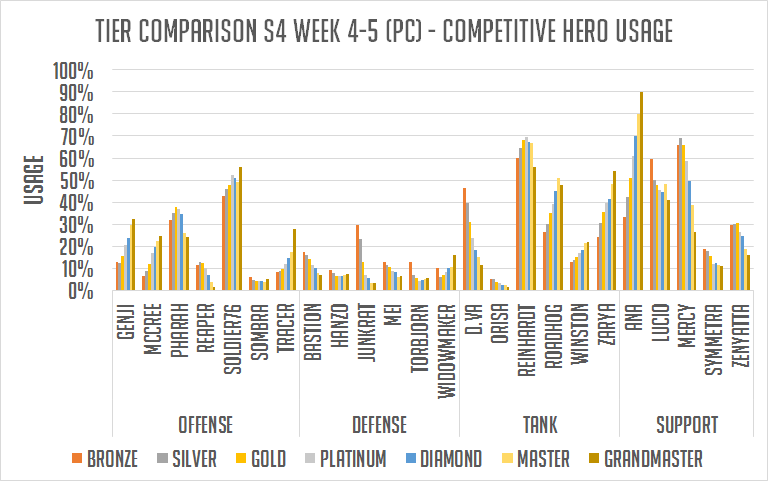 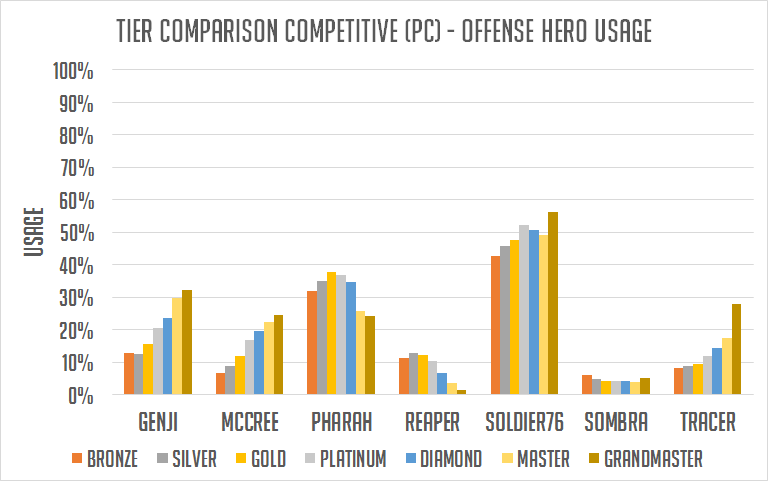 Offensive hero usage has somewhat stabilized in the last two weeks. Soldier remains the most popular offensive hero. Pharah's is the clear #2 hero all tiers except Master and Grandmaster; but this week even in those higher tiers her usage continues to grow and is up around 2%.  Pharah remaining strong may be a direct result of the continuing growth in Mercy play. The usual suspects of dive compositions Genji, Tracer, and Pharah continue to be used heavily at higher tiers, with Genji being the number #2 hero at Master and Grandmaster. As flankers as a whole have increased while Pharah remains strong, McCree sees a net increase in usage at lower tiers. With many Korean Sombra so far has not seen a significant uptick in usage despite buffs to translocator cooldown and team-visible hacked health packs. Reaper continue to be a niche picks though seeing some play at lower tiers. 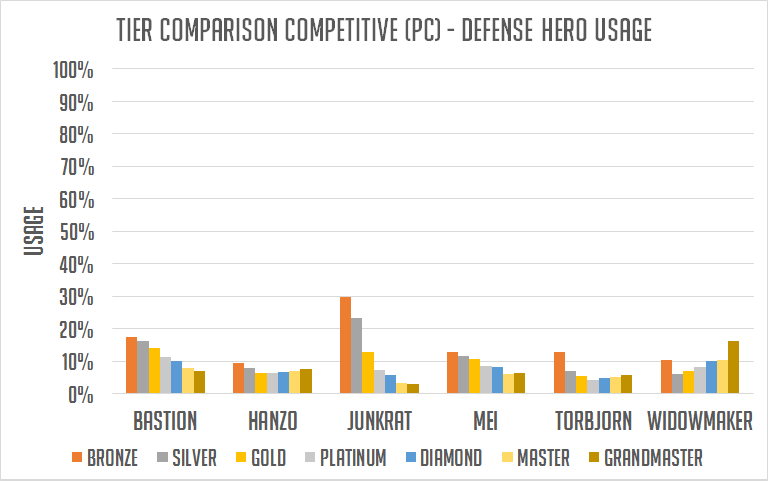 Defense heroes continue to be the least popular (and probably most situational) hero category. Bastion continues to heavily decline after the ironclad nerf and the initial excitement about his new kit (average of 3% across tiers).  Junkrat continues to be the #1 defensive hero at low tiers; he is the defensive hero seeing the biggest usage increase at all tiers this report. Though traditionally a niche low range damage nerf, the recent patch and removes self-damage from Junkrat's explosions, strengthening his close range fighting and ults. It's unclear if the increase of Junkrat is due to these buffs or the reduced interest in Bastion. Widowmaker's popularity at Grandmaster tier remains somewhat high, as she can be a strong counter to Pharah and squishies when in the right hands. Note that she sees a 3% uptick in Bronze play as well... perhaps do to the prevalence of Pharah. Hanzo, Mei, and Torb continue to be niche picks, more picked in lower tiers and strong on some modes such as Assault. 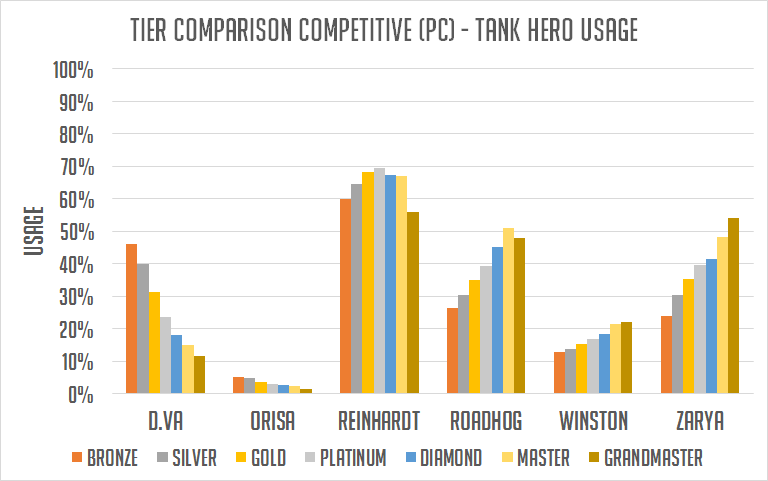 Tanks continue to dominate as the most popular be a big part of the meta at all tiers of play. Reinhardt remains the most popular tank and one of the most highly played heroes in Overwatch. Similar trends to past weeks continue, with D.Va continuing to be popular at low tiers, while Zarya and Roadhog remain very popular at high tiers. This biggest movers are Winston and the new hero Orisa. With dive composition being so strong and with the buff to his shield cooldown, Winston is now seeing lots of play (#11-#16) most popular hero depending on tier. Winston's usage has increased by up to 15% since the end of Season 3. It is interesting that higher tiers are playing Winston more, while he is somewhat known as a low skillcap hero; the reality is likely that positioning effectiveness, squishy heroes, and pro play are influencing higher tiers more. Orisa is new this report, and was only available for about 1/3 of the two weeks this report covers. We are currently seeing usage around 10%-15% depending on the tier which makes her the least favorite hero at the moment. The Overwatch community continues to figure out the best way to utilize Orisa;  right now many people are playing her in niche situations and not for the entire matches. 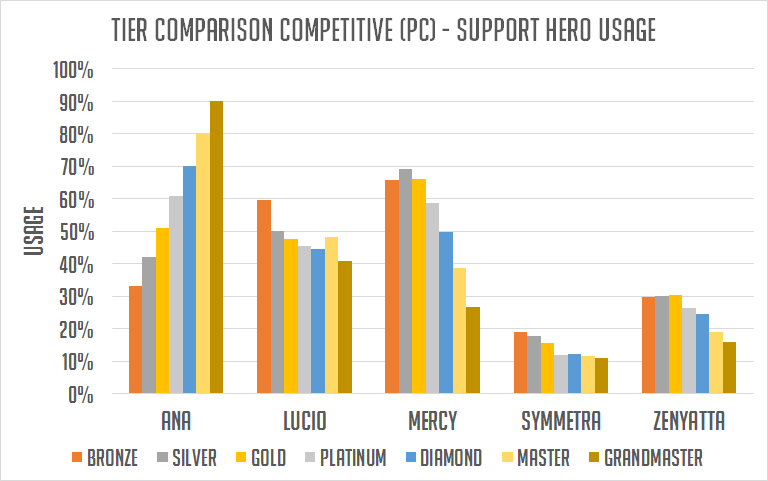 Support usage continues to shift. Mercy's growth is continuing to grow as she sees an average increase of  3% at the highest tiers of play. Mercy is now the #1 hero used at Bronze and Silver tier, and has risen 15-25% in popularity at high tiers since Season 3. The buff to her ultimate ability (invulnerability) and the high usage of Pharah are some of the factors with her increasing popularity. Being able to swoop in and survive a resurrect and continue to heal your teammates is quite powerful. Ana continues her sharp decline, down an average of 3% across all tiers. She is still the most popular support at the higher tiers, with 90% usage at Grandmaster and 80% at Master. It will be interesting to see if the nerfs to her rifle damage while continue to haunt her. Lucio remains highly used as aura healing and speed boost remain incredibly strong. With major changes to Lucio on the PTR making him more of an individually-strong hero (perhaps the biggest change is the reduced AOE radius), it will be interesting to see if his popularity changes. Zenyatta sees a significant uptick of 2% usage on average; he pairs well with dive compositions and recently received a minor buff removing weapon spread. Blizzard seems to be positioning him strongly as the DPS support hero, which may enable him to see more play. Symmetra remains a niche pick and useful on certain modes and capture points. 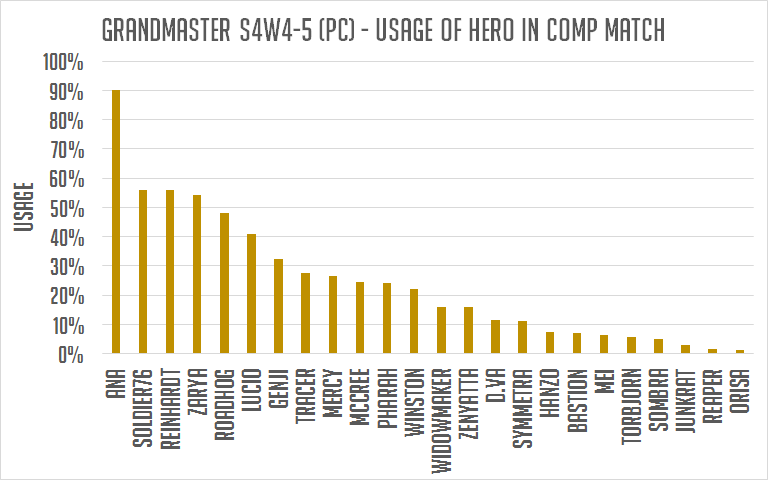 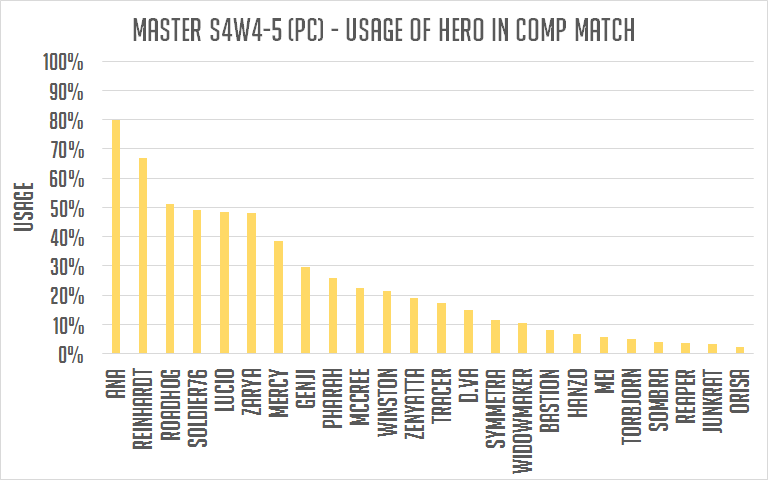 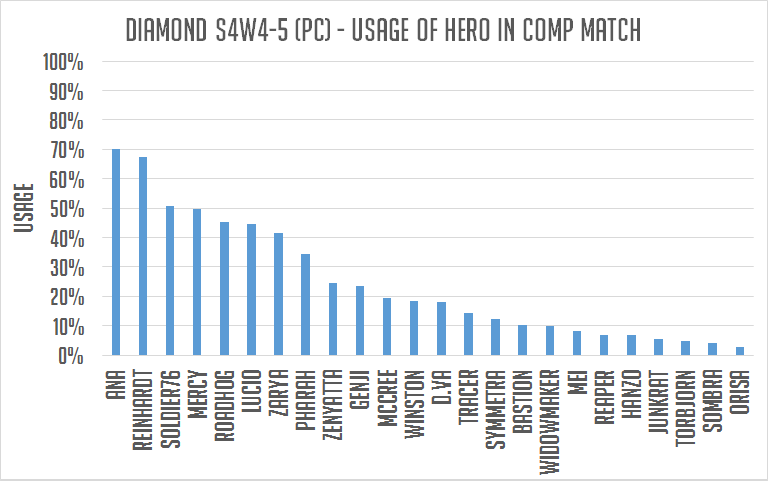 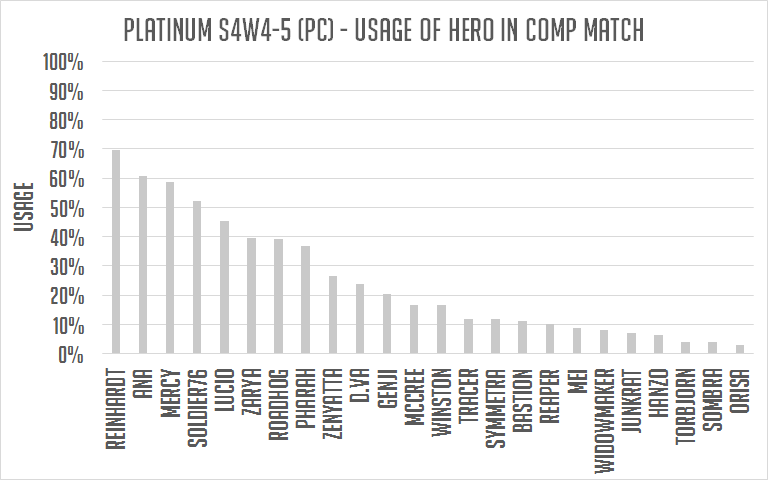 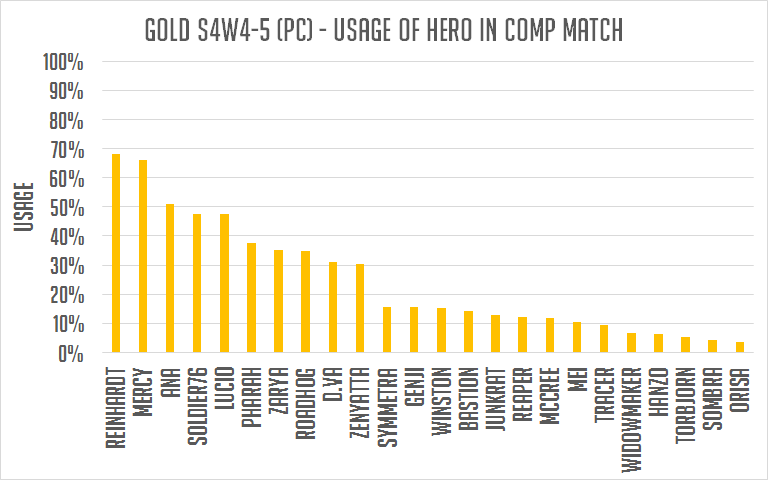 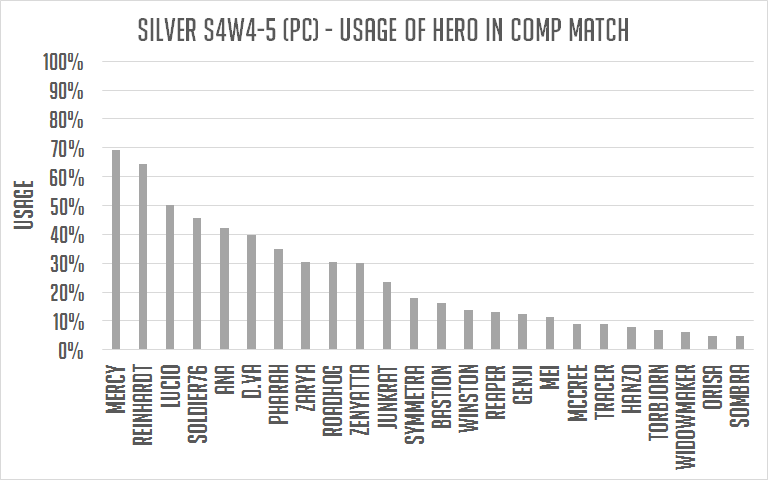 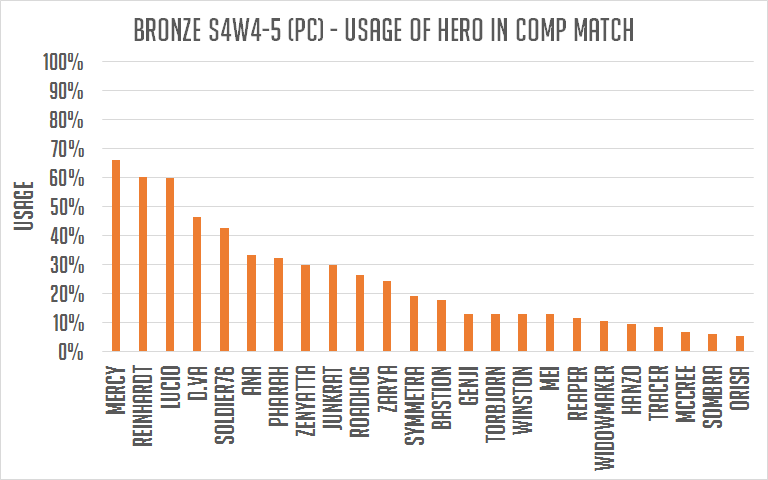