Welcome to OmnicMeta's report on the state of competitive Overwatch on PC from week 2 of Season 4. In this report, we look at the meta of hero usage trends across tiers from Grandmaster through Bronze.

What this report is: A report and tier list of Overwatch hero usage and player trends across competitive ladder tiers (Grandmaster -> Bronze), covering usage for Week 2 Season 4 (a single week of S4). Players are divided into tiers by their current SR at time of data capture.We want to answer the questions "What are people playing at each tier? What are the big changes from the prior week?".

New! Underneath each tier's "Hero Tier List" we now list the heroes whose usage changed the most since last week's report.

This week continues to show the evolving meta of Overwatch. Despite all the complaints and perceived weakness in Season 3, Mercy continues to surge in popularity in S4 (Now the most popular hero in Bronze, #2 Silver, #2 Gold, #3 Platinum). Ana is the main victim of Mercy's popularity, though still the most played hero among Diamond, Master, and Grandmaster players. Dive compositions have become a very common team composition, and Pharah, Genji are some of the heroes seeing more play as a result. Winston is the biggest eye-popper this week - surging to near 20% usage in Grandmaster tier, while being played quite a bit in the pro scene as well.

As always, hope you enjoy this report! 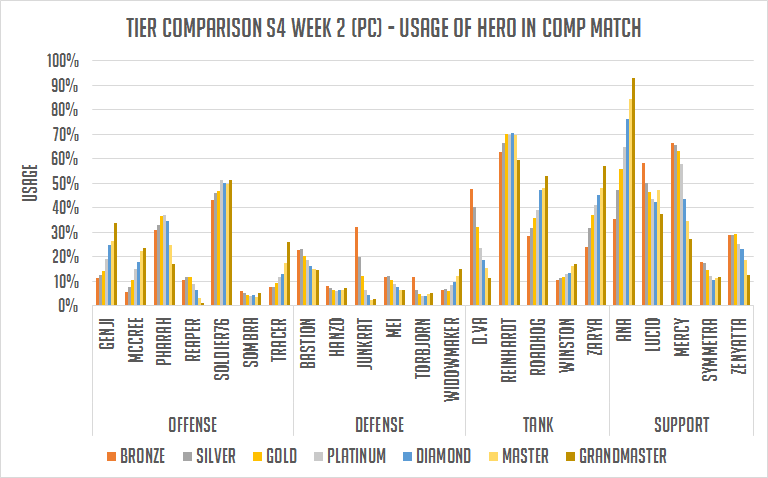 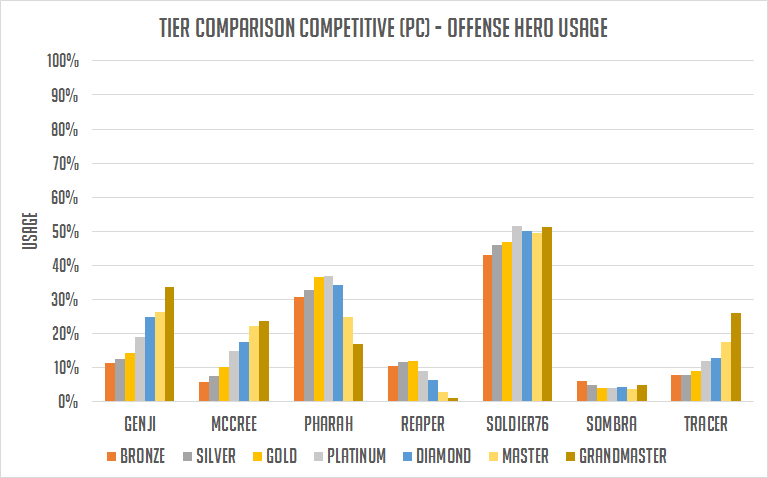 Offensive heroes seeing play are being heavily influenced by dive compositions. Soldier is the most picked offensive hero, but his usage continues to wane with less than 50% usage for most tiers. With Mercy seeing very heavy usage, Pharah's popularity on competitive ladder is growing. Strong usage of Pharah, along with Genji and Tracer at higher tiers, demonstrate that the meta has shifted to dive and hybrid team compositions. As a continuing trend, Sombra and Reaper continue to be extremely niche picks. There are a number of heroes at the moment that seem to be preferable to Reaper, including Soldier and Roadhog. With a buff to Sombra's translocator on the PTR, she may finally start seeing more play in the near future, though time will tell. 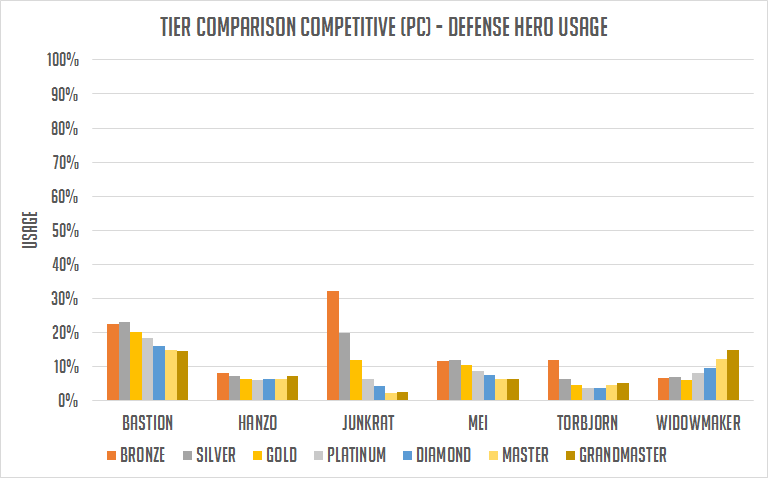 Defense heroes usage continue to reflect a much stronger Bastion, despite the nerf to his "ironclad" passive. Bastion is the most popular Defensive hero, with the exception of Junkrat at Bronze tier. Note that Bastion's usage is still a relatively meager 15%-22% across the tiers; he is currently the 11th to 15th most popular hero depending on tier. In other words, Bastion is still strong due to buffs to recon mode and his survivability, but many offensive and tank heroes are preferred over him. Junkrat continues to be an interesting anomaly who is extremly popular at low tiers; it will be interesting to see if the minor buffs on the PTR result in additional play. Widowmaker's popularity at Grandmaster tier has descreased from last week by 4%; possibly due to the increased play of one of her counters - Winston. However, she still seems like a strong choice in skilled hands given the increased prominence of more squishy heroes like Genji, Pharah, and Mercy. Hanzo, Mei, and Torb continue to be niche picks, strong on some modes such as Assault. 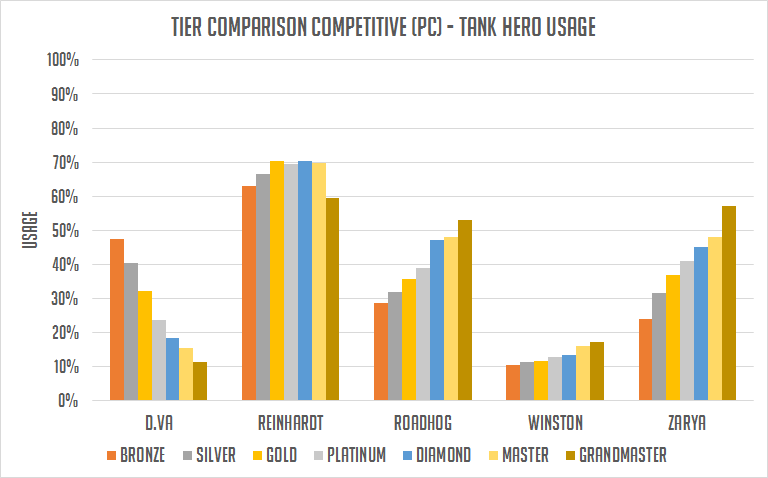 Tanks continue to be a big part of the meta at all tiers of play. Reinhardt continues to be the most popular tank and one of the most highly played heroes in Overwatch, as he continues to be the foundation of most team compositions. D.Va continues a slow fall in usage as a direct result of her nerfs from last season. While in season 3 she was the most popular hero in Bronze and saw play in nearly 40% of matches even among Grandmasters, D.Va now has completely fallen off, approaching 10% usage among Grandmaster players. Zarya is now the #2 tank seeing play, with her projected shield bubbles and ult highly valuable, especially with dive compositions and heroes like Genji, Pharah, and Tracer. Roadhog's usage has very slightly fallen off, likely due to the change in meta for team compositions. He continues to be quite strong and a solid pick whose skill cap is appreciated even more at higher tiers of play. The biggest change and news is the resurgence of Winston. With dive team compositions strong, he is seeing significantly more play, especially at higher tiers. It is entirely possible that if the PTR buffs to his shield go live, he will start to see even more play. With Winston being somewhat easy to pick up and play, we may see a "trickle-down" effect of Winston; heavier usage at the pro scene eventually turning into popularity at lower tiers such as bronze. For Winston fans, this could be the break you've been waiting for. 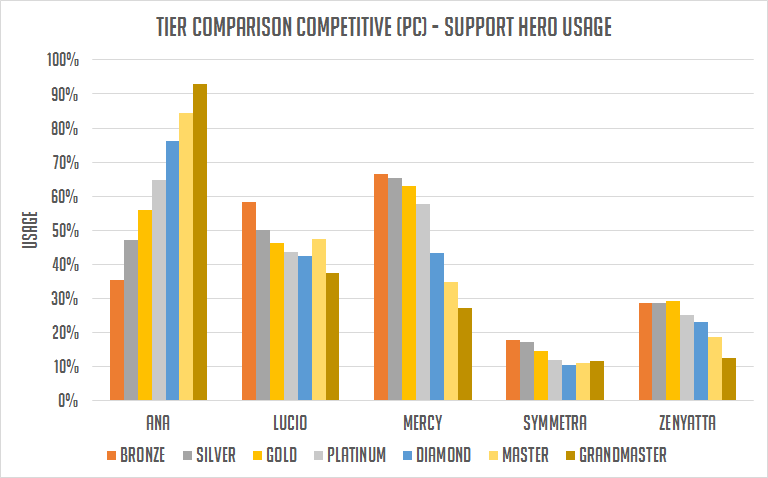 Support usage continues to shift. Mercy continues to be picked more and more, and is now the most played hero in Bronze tier, and has also seen a 17% increase in play since S3 at Grandmaster tier. She is commonly being played alongside Pharah, and even is seeing play in dive compositions. While Ana remains incredibly strong, she is the hero seeing the biggest decrease in play. Rumors of her "demise" and the nerfs to her rifle damage may continue to hurt her usage in weeks to come. Zenyatta has recovered from his dip last week, and now is being played at the same rate as S3. With dive compositions continuing to grow in popularity and a slight alternate fire buff on the horizon, we may see Zen get more play in the future. Lucio is still very popular, as aura healing and speed boost is quite strong. Symmetra remains a niche pick despite the rework of her kit. 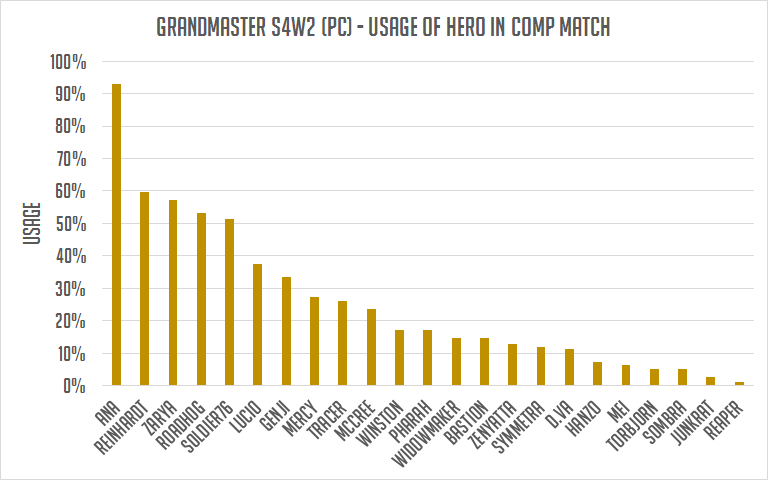 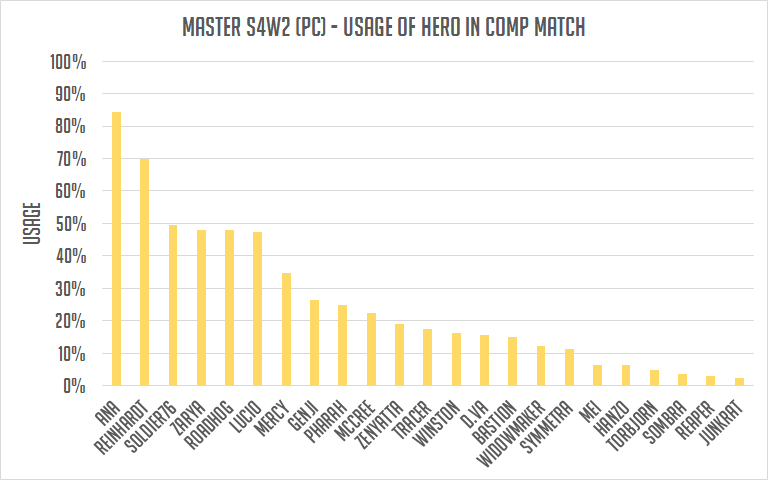 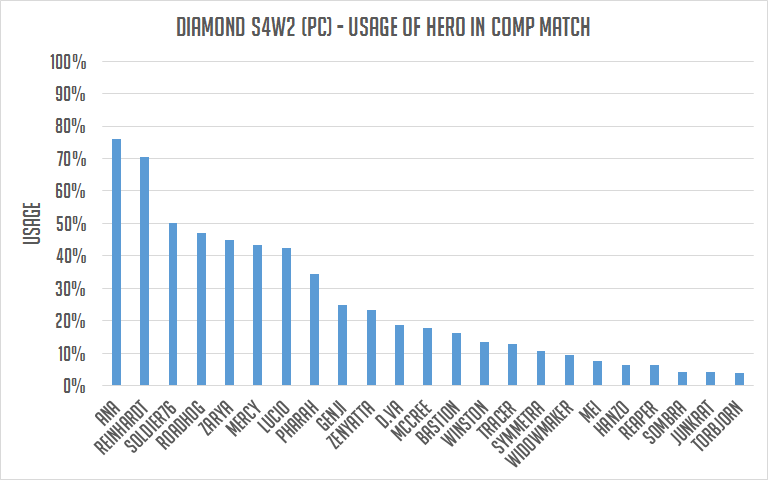 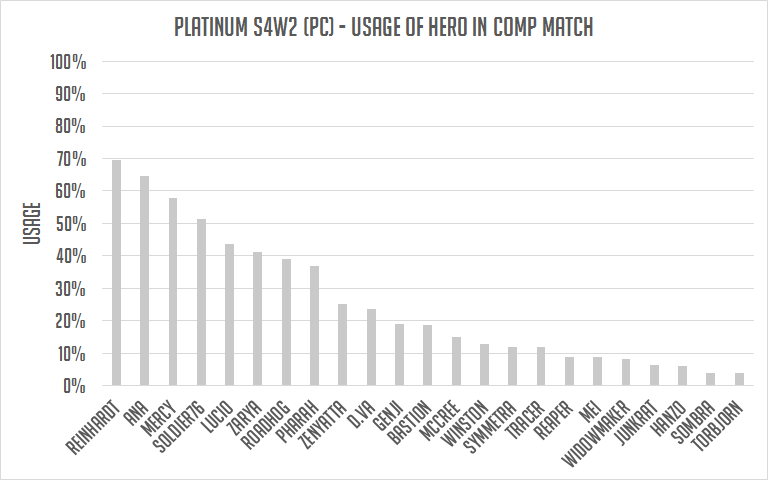 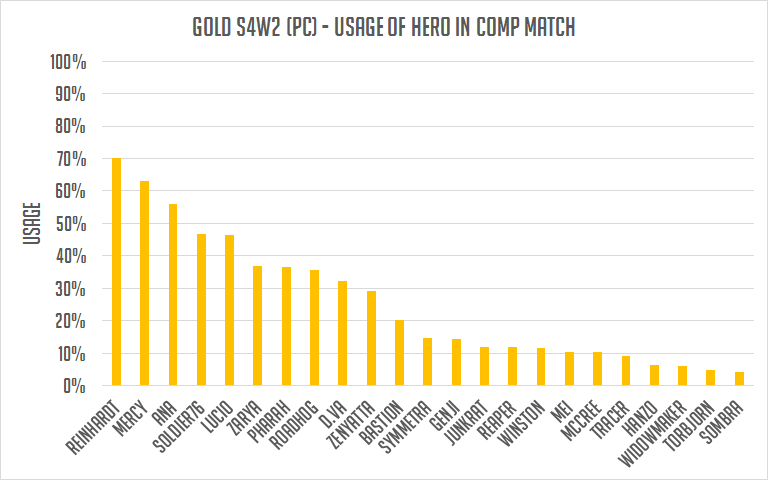 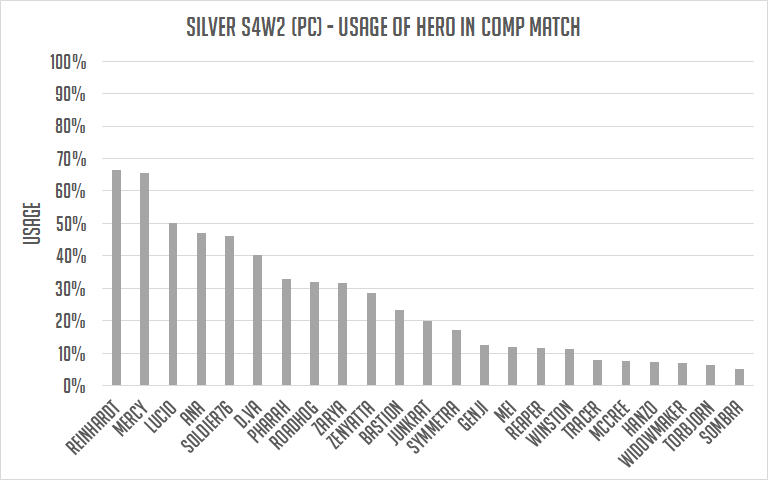 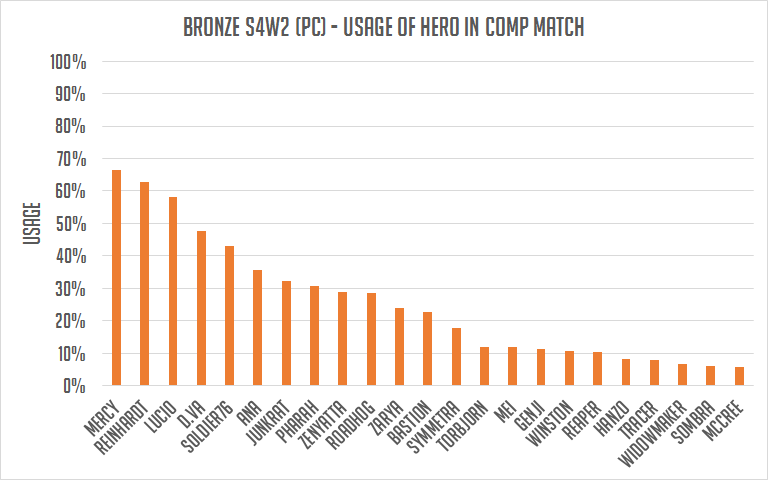