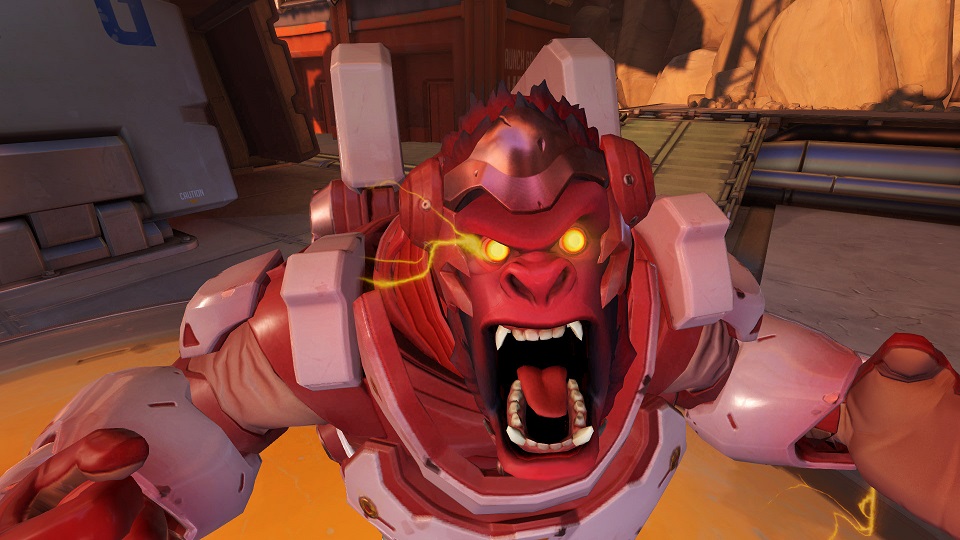 Heroes that thrive in aggressive and dive team compositions have seen steady increase in play since the middle of Season 4.  After patch 1.12.02 hit live servers, there has been a huge swing in hero play.  The Roadhog and Reaper changes appear to greatly accelerated the shift, and many players  previously holding out have now shifted over to heroes that fit into dive team compositions.

The main trends: Roadhog, the most popular off tank for many months, has now completely fallen out of the meta (and in a single week).  The changes to his weapon have largely been viewed as a major nerf, to the point of very few players wanting to play him anymore.  Instead, D.Va and Winston are up huge in usage.  Winston in particular is a standout, as he is now the #1 hero played at the Grandmaster tier.  The big buff to Reaper's self healing have also catapulted him higher in usage, and now has a similar usage to Pharah - something unthinkable even a week ago.  Dive heroes in general are ruling the roost among offensive heroes, with Soldier finally giving up his #1 offensive spot at Grandmaster (and falling to #3).  Support heroes also reflect the new meta, with Lucio and Zenyatta rising.

The infographic above presents the top 2 usage gainers for the competitive tiers. If there is any indication that the meta is shifting to dive team compositions, this graphic is it.  There are only three heroes that make the top 2 gainers across all tiers - Reaper, D.Va, and Winston.  Reaper is up big across the lower tiers, rising greatly after the patch changes to self healing.  Winston and D.Va are the biggest gainers in the higher tiers, as dive heroes have completely taken off. Note the nearly 20% gains at tiers Diamond -> Grandmaster.

As far as the top 2 biggest usage losers this report, Roadhog makes the top of the list at all tiers.  He is down massively after the changes to his weapon.  Across tiers Platinum -> Grandmaster, Roadhog is down nearly 30% in usage.  Reinhardt continues his hard fall from previous weeks, down greatly in usage across nearly all tiers.  He has fallen out of the meta since the beginning of the season. 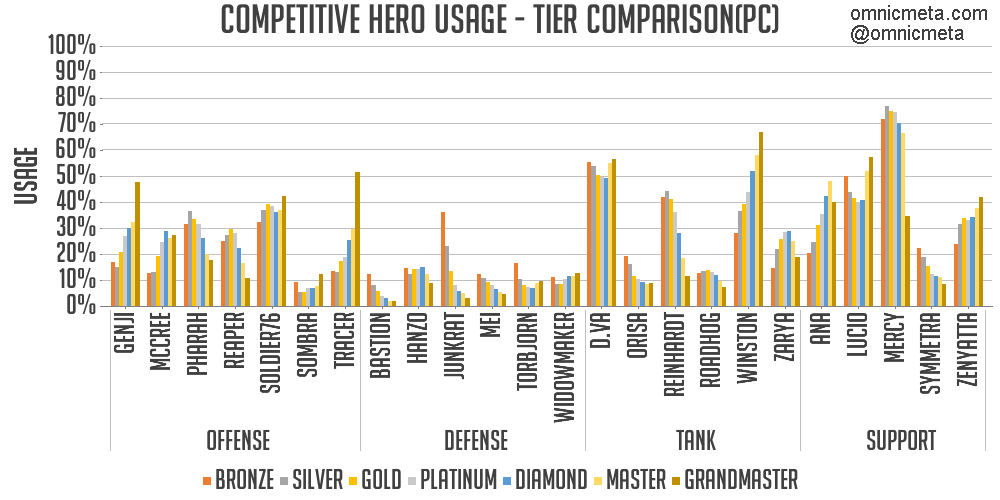 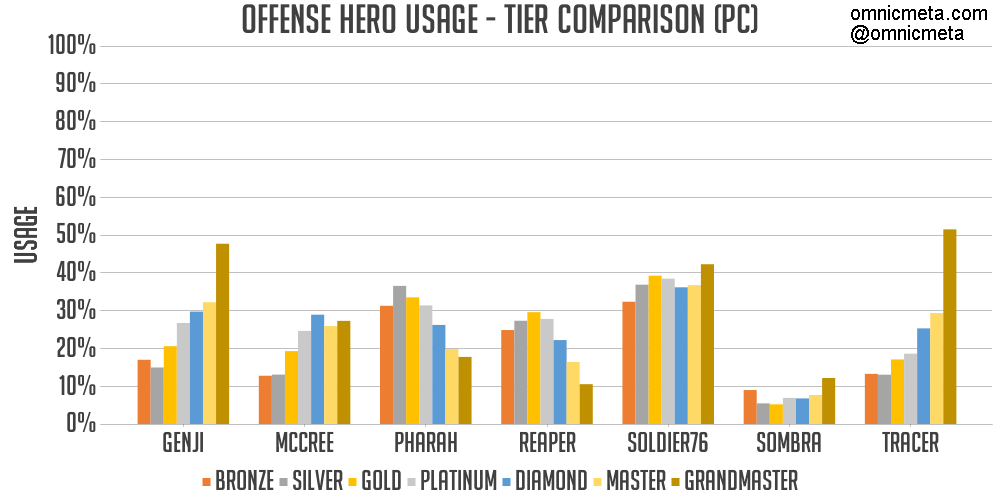 Offensive hero play has shifted greatly as the result of meta and hero patch changes.  The buffs to Reaper's self healing has increased his usage by 12% on average across all competitive tiers.  He has become the #3 most played offense hero (behind Soldier and Pharah) in tiers Bronze -> Platinum.  Genji and Tracer also increased in play across the tiers, with Genji gaining 6% and Tracer 5% usage at Grandmaster.  Dive team compositions appear to be *the* way to play at the higher tiers at the moment, and seem to be catching on at lower tiers as well. The next big gainer this week is McCree, up 5% on average across the tiers.  He is seeing 7% - 10% more play at tiers Diamond -> Grandmaster. He recently received a buff to his Deadeye ultimate ability, increasing the lockon speed.  With the change seemingly minor, the prevalence of Genji and Tracer (and therefore the strength of flashbang) may also have affected his pickrate.  The trend of Soldier slowly falling out of the meta continues as he experiences the biggest loss in usage this report, down an average of 6% this week.  He is now the #3 most popular offensive hero at Grandmaster (behind Genji and Tracer), and is close to giving up his long held #1 spot at nearly all tiers.  Pharah also falls significantly this report, down 4% on average.  While she can be played in Dive team compositions, it appears that the higher tiers are clearly preferring Tracer and Genji.  Finally, with the buff to Reaper catapulting him into the meta, Sombra remain s the only niche pick among Offensive heroes. 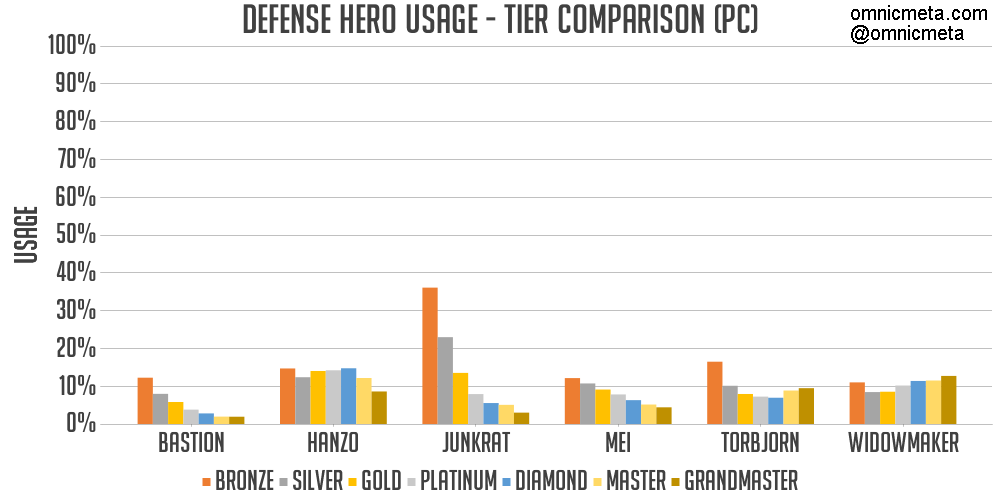 Defensive hero usage has not changed significantly since the last report two weeks ago.  The category is largely seen as niche, and the "Hanzo meta" simply hasn't happened despite his significant weapon buffs.  Given the current preferences for fast and aggressive team compositions, it seems unlikely he will rise in prominence anytime soon.  Defensive heroes in general have risen the most in Bronze tier this week, up an average of 9% across the heroes.  Junkrat continues to be the exception and an example of a popular defensive hero at Bronze (36% usage) and Silver (23% usage) tiers.  Honorable mentions at Bronze are Hanzo (15%) and Torbjorn (16%).  The remaining defensive heroes (Bastion, Mei, and Widowmaker) remain uncommonly seen across all tier. 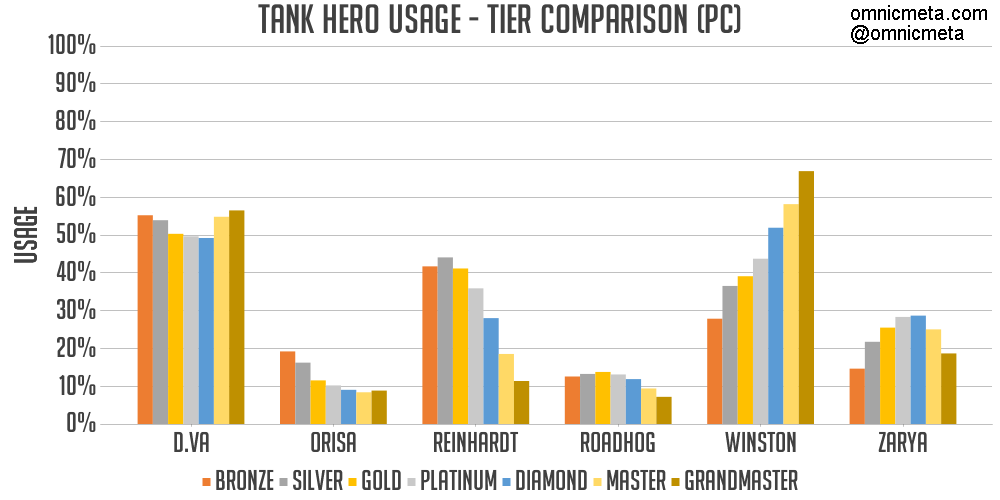 The recent patch changes to Roadhog have greatly affected Tank hero popularity.  Roadhog's usage is down 26% usage on average, and has shrank so much that he is now a niche pick across all tiers.  Surprisingly, Roadhog now has less than 10% usage in Master and Grandmaster tiers, and is the least popular tank overall in Grandmaster.  At the same time, D.Va and Winston have experience massive gains in usage.  This is likely due simply to the growing popularity of dive compositions, but also due to one of their main counters (Roadhog) completely falling out of the meta.  Winston's rise in particular is unprecedented, as he moves from the #6-#10 most popular hero to the #1-#3 most popular hero in Overwatch.  For the first time in two seasons, Ana has lost her #1 spot at Grandmaster, and to Winston.  In tiers Bronze -> Platinum, D.Va is now the most popular tank overall.  Again, dive team compositions are now incredibly popular across the board.  Reinhardt continues to fall out of the meta - he is down for the 4th straight report, down an average of 10$ usage across the tiers.  In particular, Reinhardt is at 11% usage at Grandmaster and clearly a niche and unpopular pick.  It seems clear now that it is not simply bugs, but mostly player preference and the meta as a whole that is keeping Reinhardt from being played.  Zarya's usage remains mostly the same at tiers Bronze -> Diamond, but has fallen 5% and 10% in usage at Master and Grandmaster.  Despite her strong kit, the extremely strong preferences for dive heroes Winston and D.Va appear to be at play.  Finally Orisa remains a very niche hero pick due to the current fast-paced meta. 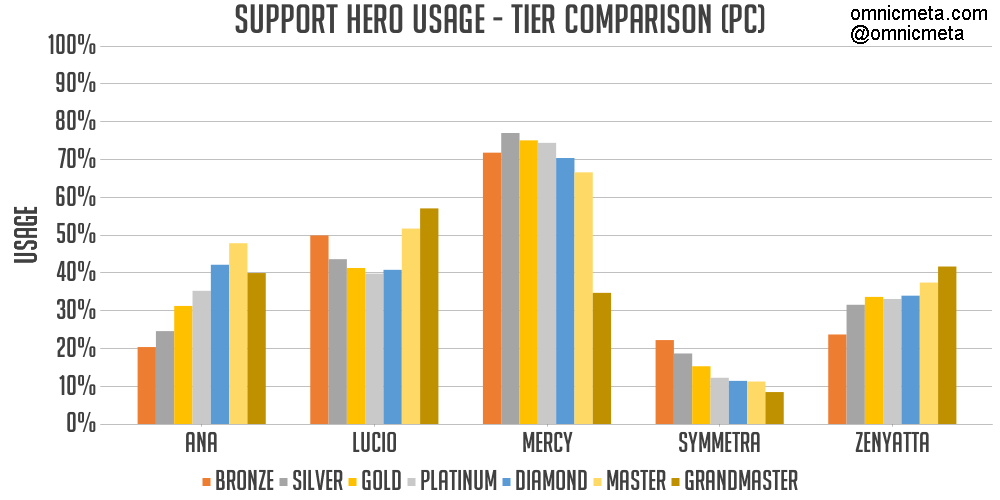 Support heroes also see a significant shift this report as dive team compositions swell in popularity, particularly at the higher tiers.  Lucio (Speedboost) and Zenyatta (Discord orb) surged in popularity at Master and Grandmaster, all up more than 7% usage in those tiers.  Zenyatta previously had been more preferred at lower tiers, and now is much more preferred at higher tiers.  Mercy remains generally the most popular support and Overwatch hero overall, though has lost some popularity at Grandmaster, likely due to the increase in Lucio/Zenyatta popularity.  Her kit continues to be strong, but doesn't fit perfectly into fast-paced team compositions.  Ana continues her freefall, and is now of the verge of being overtaken by Zen in popularity at all tiers.  Overall, she is the #3 and sometimes #4 most popular support at most tiers.  Similar to Zarya, she is an otherwise great utility hero that simply has fallen out of favor due to meta and hero preferences.  Finally, Symmetra remains a niche pick as always with no sign of that changing in the future. 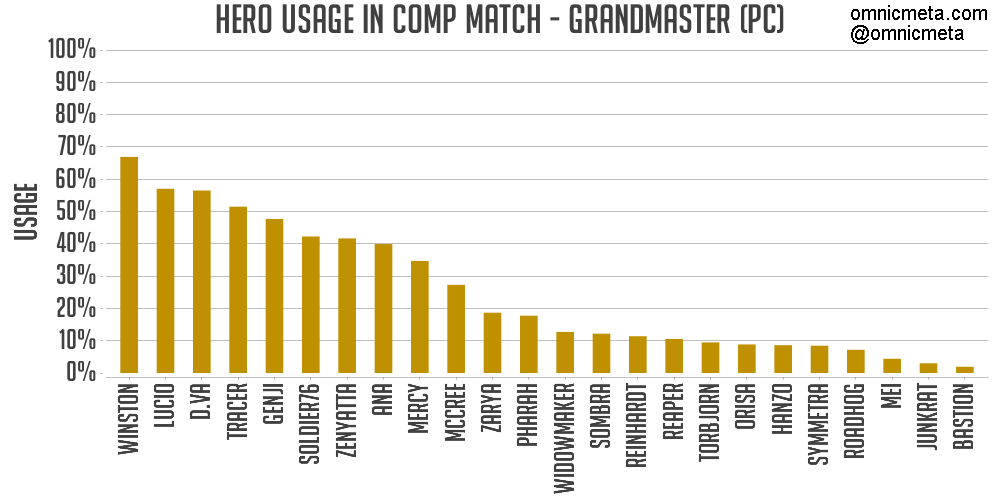 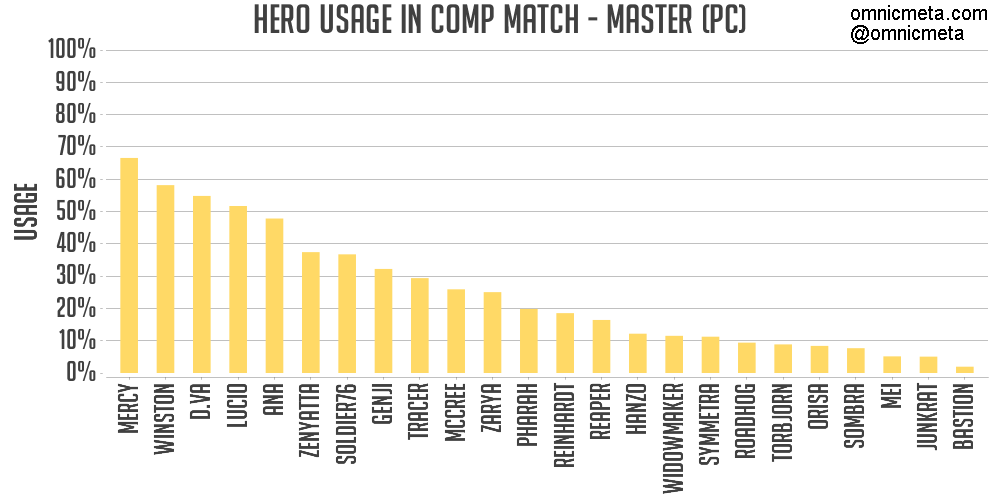 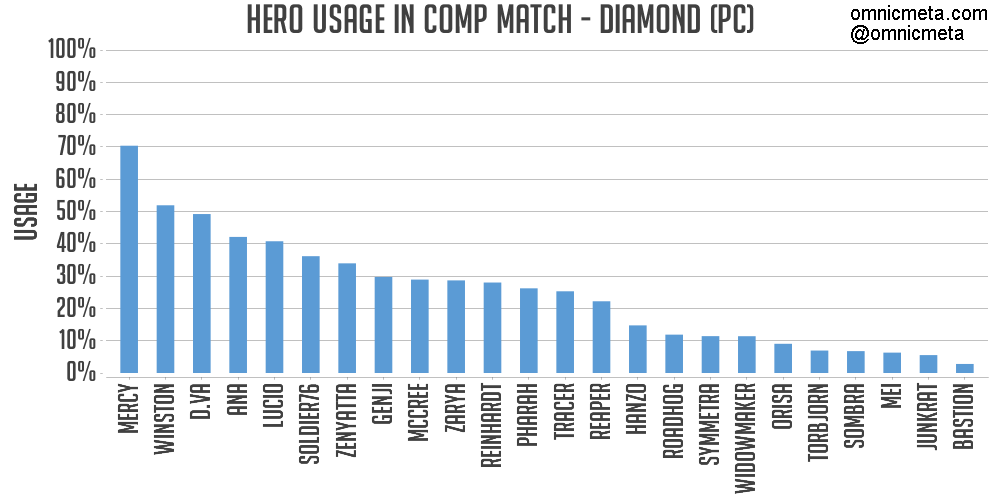 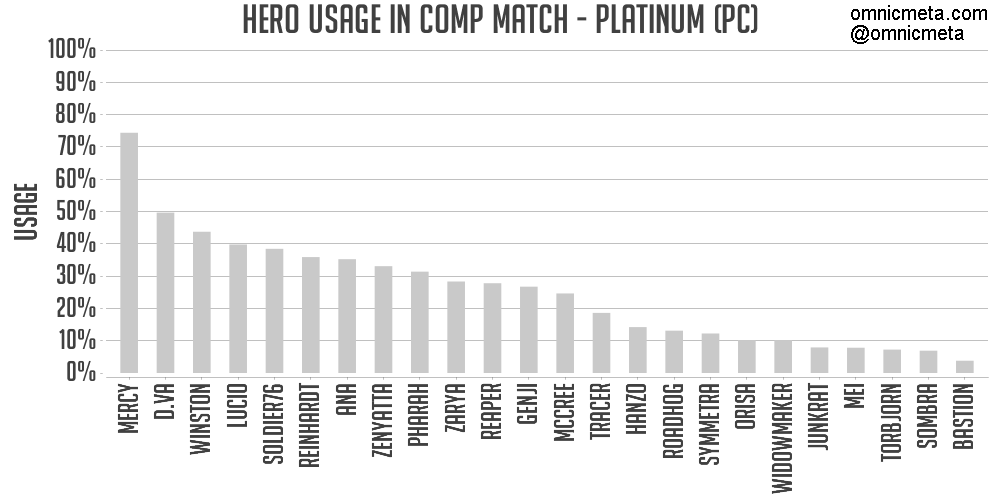 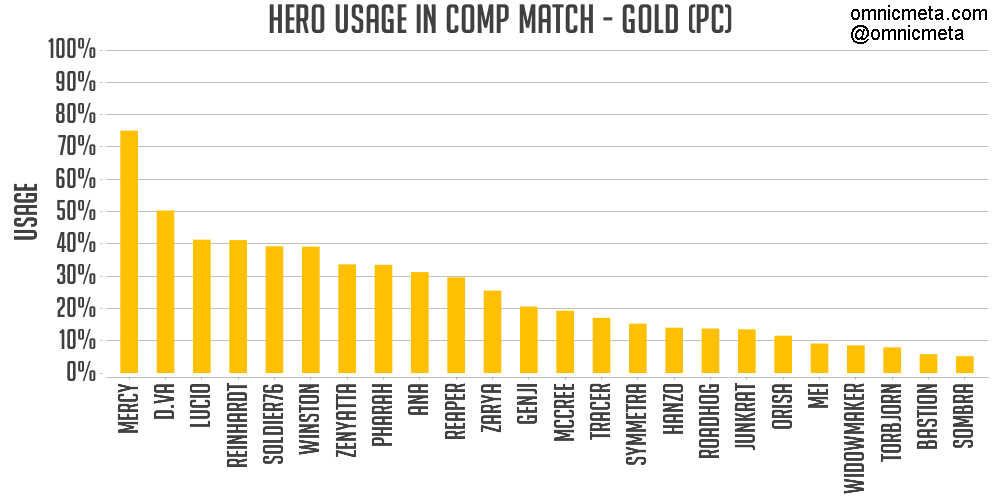 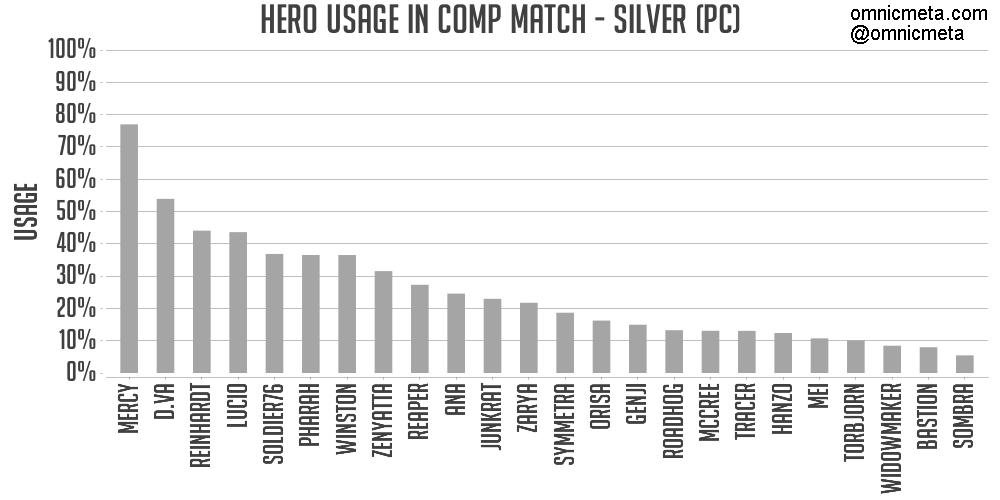 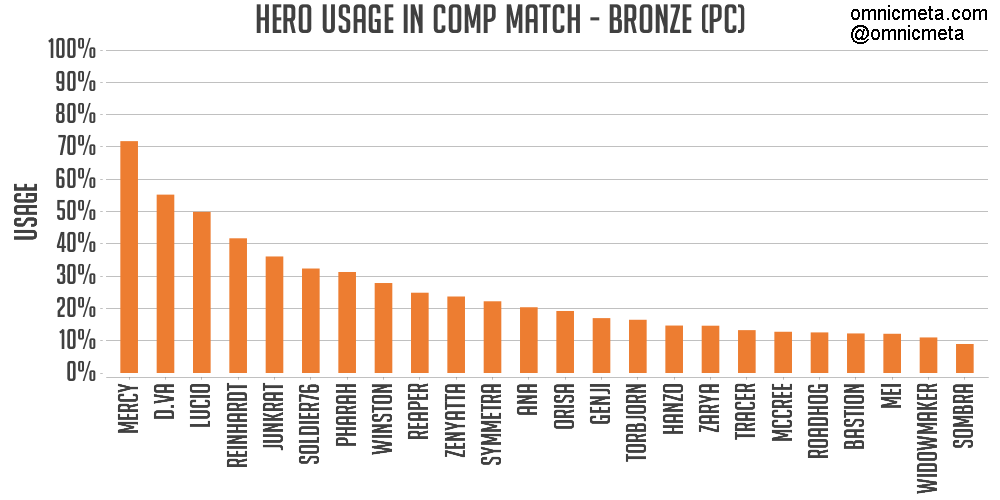