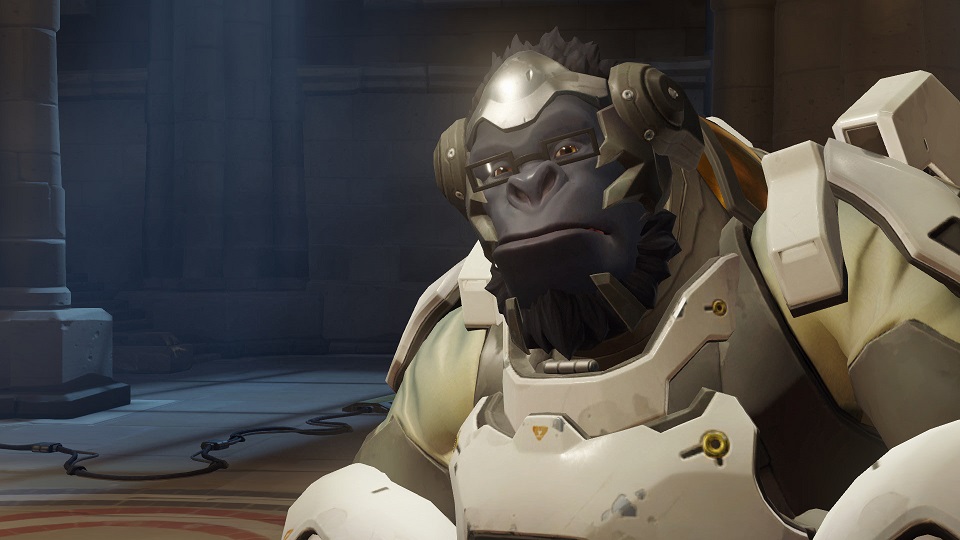 Season 5 continues to demonstrate just how much the hero meta has changed since Season 4.  Full-on aggression and dive team compositions appears to have hit in full force, as past team staples likes Reinhardt and Soldier are falling fast.  If you like highly mobile heroes and adrenaline-fueled team fights, this emerging meta is definitely for you.

The main trends: D.Va and Winston gain big for the second report this season, and now are challenging for the top tank slots overall. The main victim is Reinhardt, down 7% across all tiers and in free fall since the last report.  Though the Overwatch online community is pretty negative on patch changes and bugs with Reinhardt, its also entirely possible that he simply doesn't fit in with the meta as easily anymore. Soldier is still the most popular offensive hero, but falls another 4% this week.  The usual dive suspects Genji, Pharah, and Tracer are maintaining their strength and soon might compete for the #1 slot.  Zenyatta is seeing more play as a result of the popularity of dive, while Ana continues her fall out of favor.  Ana is now the #3 support in 4/7 competitive tiers, and #2 in 2/7 tiers.  Not surprisingly, Mercy now claims #1 support status in 6 out of the 7 tiers.

The infographic above presents the top 2 usage gainers for the competitive tiers. If there is any indication that the meta is shifting to dive team compositions, this graphic is it.  This report, the biggest gainers are very consistent across the tiers - Winston and D.Va.  Those two tanks are key parts of dive team compositions, as they are highly mobile and thrive on close range fighting.  Mercy making waves in Grandmaster is certainly a surprise, as Ana dominated that tier last season.  With the final holdouts making the switch, it seems that Mercy is as popular as ever.

As far as the top 2 biggest usage losers this report, Reinhardt make the top of the list at nearly all tiers again.  His massive decline is popularity in Season 5 is perhaps the biggest change this season thus far.  Whether his decline is a result of the Earthshatter nerfs, hammer swing hit registration bugs, or the rise of dive is unclear.  Either way, his popularity has greatly fallen.  Similar to last report, Solider and Ana continue to fall.  Ana is continuing to feel intense pressure from Mercy and Zenyatta, while Soldier's damage nerf seems to continue to affect him. 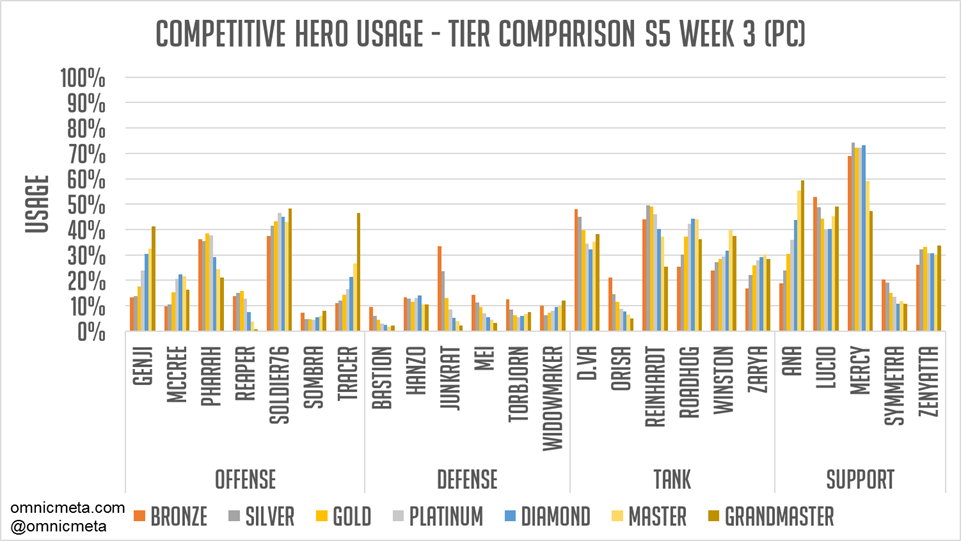 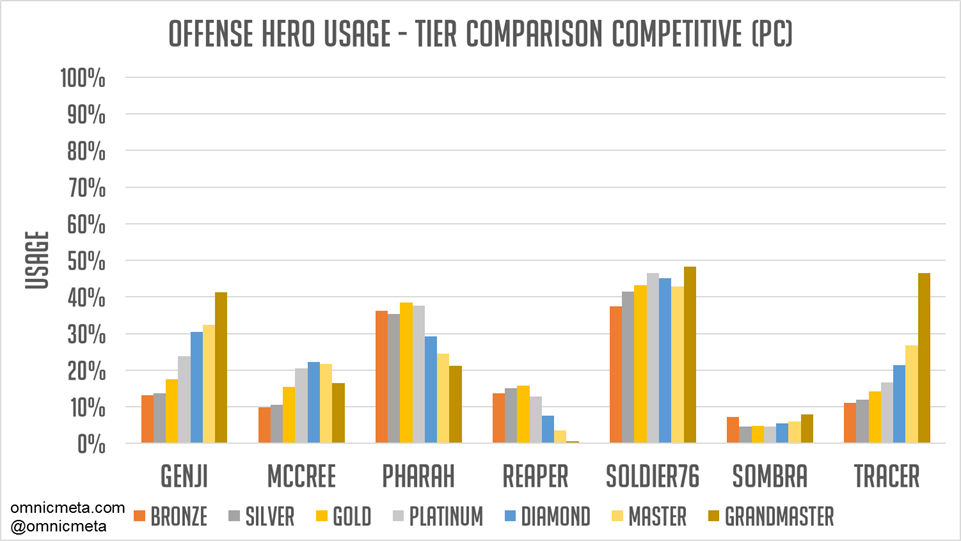 Offensive hero play remains roughly the same as last report.  Soldier experiences the biggest change in usage, down andaverage of 4% this week.  He still remains the #1 most popular offensive hero, though he is being challenged by Pharah (Bronze -> Platinum) and Tracer (Grandmaster).  Soldier is most likely being used as a hitscan hero to help deal with Pharah, and as a second or third DPS hero in lieu of a tank or Genji/Tracer.  The next most popular heroes are similar to last week, as receive very modest increases in popularity.  Genji, and Tracer are staples with dive team compositions, while Pharah is also run in dive and pairs well with the "always-present" Mercy.  The higher popularity of Genji and Tracer at higher tiers, and Pharah at lower tiers indicates the perceived relative skill level required and the preferences in dive team compositions.  Despite flashbang being effective for dealing with Genji and Tracer, McCree remains a less popular hero.  The upcoming changes to his ultimate make it more useful, but it is unclear if it will increase his usage in competitive play.  Reaper and Sombra remain niche picks, though changes to Reapers passive enables him to duel tanks more easily, and may make him viable. 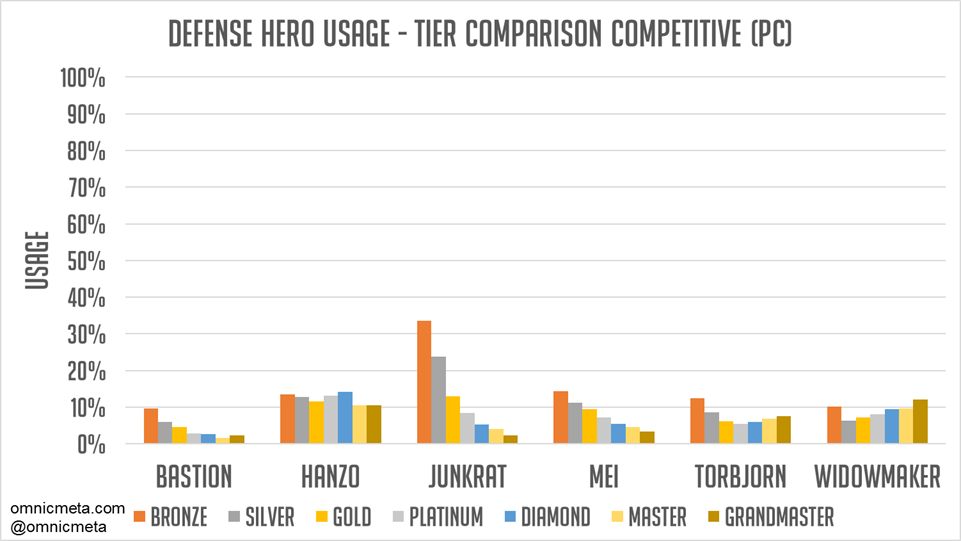 The Defensive category contains some of the most niche and situational heroes.  While defensive heroes in general remain the least popular in Overwatch, Junkrat continues to be the exception at Bronze (34% usage) and Silver (24% usage) tiers.  Bronze in general appreciates defensive heroes much more, as typically there is one defense hero per team in an average match, nearly triple the usage of higher tiers.  Though he was a big gainer for the last report, Hanzo's popularity remains roughly the same this week, though he gains 2% at Bronze.  The remaining defensive heroes (Bastion, Mei, Torbjorn, and Widowmaker) remain uncommonly seen across all tier. 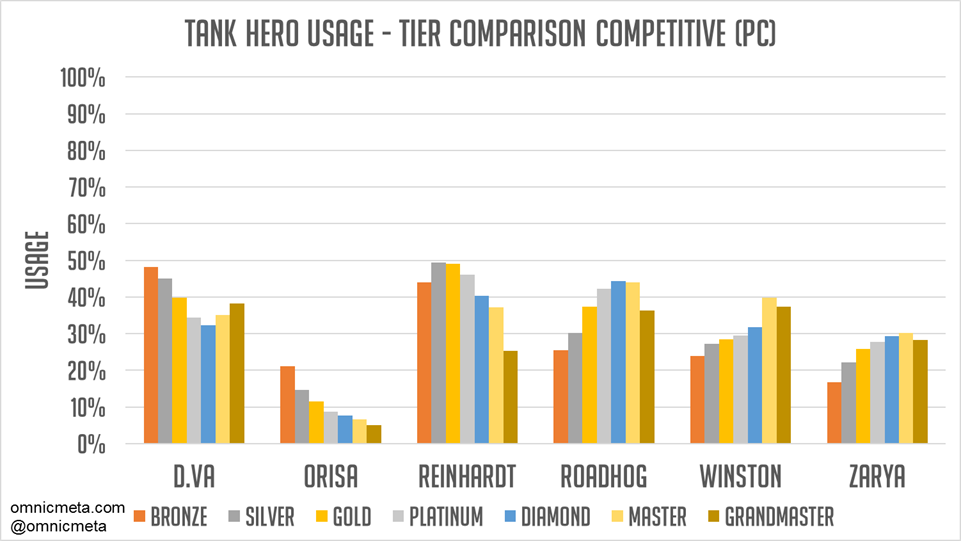 Dive team composition have shaken up Tank play across all tiers.  Looking at the usage ratings, 5 of the 6 Tanks are being heavily used in competitive play.   Reinhardt has completely sunk this report, and is now down an average of 16% in usage since the start of Season 5. Huge gains from D.Va and Winston accompanied the Reinhardt drops, as D.Va is now the #1 Tank at Bronze/Grandmaster while Winston is now #2 at Master/Grandmaster.  Both D.Va and Winston are key pieces to dive team compositions, and their rise may continue in the future.  Roadhog remains an incredibly popular pick, and is the #1 tank at the moment for Diamond and Master tiers.  His hook combo has the potential to one-shot most heroes in the game, making his potential game impact incredibly high.  With a huge nerf to his one-shot potential coming with the PTR patch, Roadhog's "carry hero" status and competitive usage are on the chopping block.  Despite losing usage at every tier, Zarya remains a popular hero with her ult and projected barrier still being powerful, especially for heroes such as Genji and Tracer.  Despite massive buffs to her shield, Orisa remains a very niche hero pick. 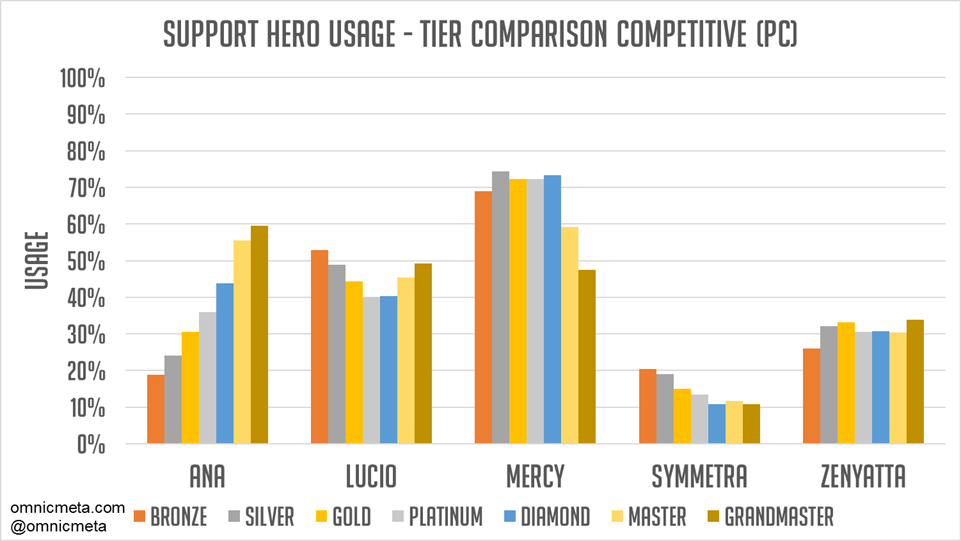 Supports continue to shift as a continuing trend from Season 4.  Mercy continues to grow in popularity at high tiers - this report she gains +6% usage at Diamond, +4% usage at Masters, and +11% usage at Grandmaster.  Mercy is the most popular hero in Overwatch and the most popular support at all tiers except Grandmaster, though with her recent gains we may see her become #1 in GM in the future.  Ana is down another -6% in usage across all tiers this report.  Long are the days where Ana was at 90% usage, as she falls greatly and is below 60% usage even at Grandmaster.  Zenyatta is an interesting story this report, as he gains a massive 9% usage at Grandmaster.  OVer the past several months we have seen Zenyatta change from a hero preferred in the low tier meta, and now it appears he is starting to be preferred more at the high tier meta (due to the prevalence of dive team compositions).    Lucio stabilizes after spending 6 weeks dropping in popularity after the nerf to his aura radius.  He is still a very popular hero and a key part of many popular team compositions.  Finally, Symmetra remains a niche pick as always with no sign of that changing in the future. 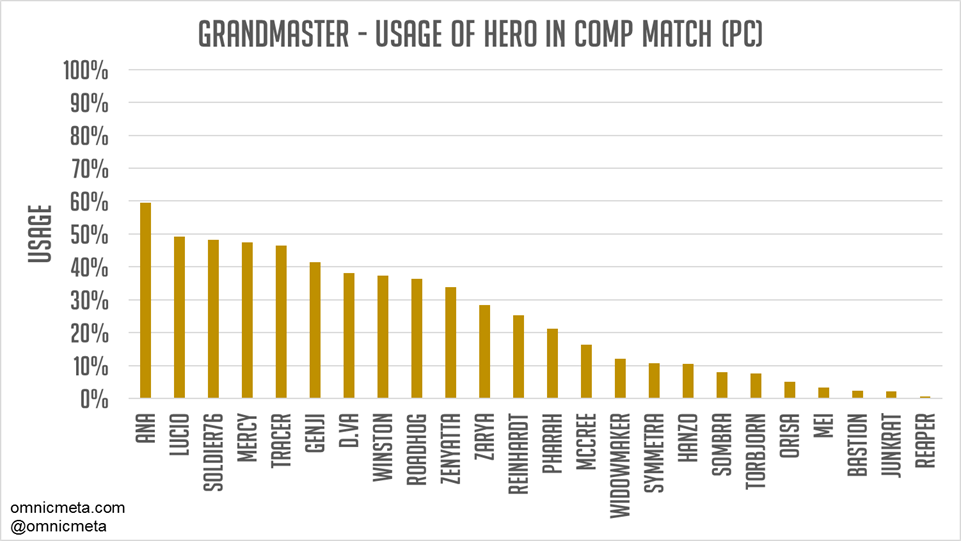 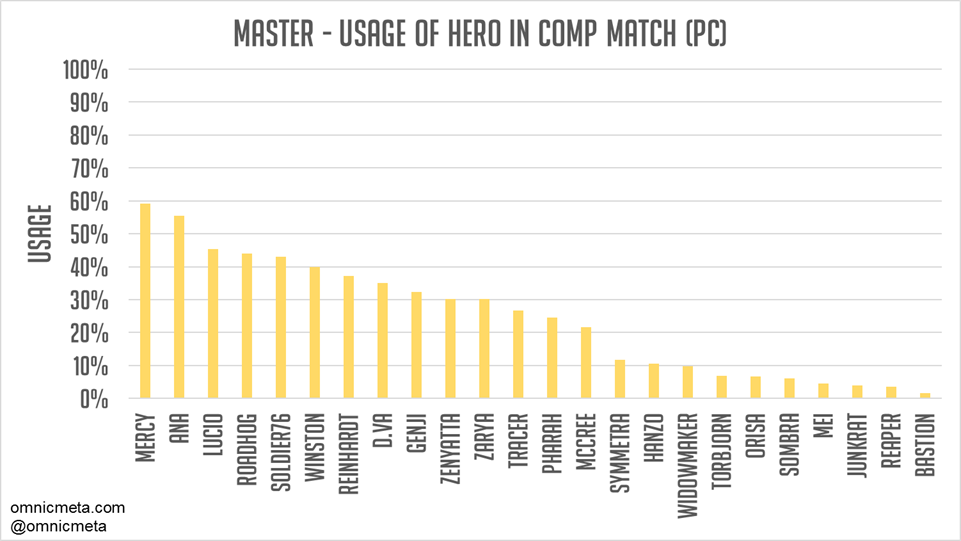 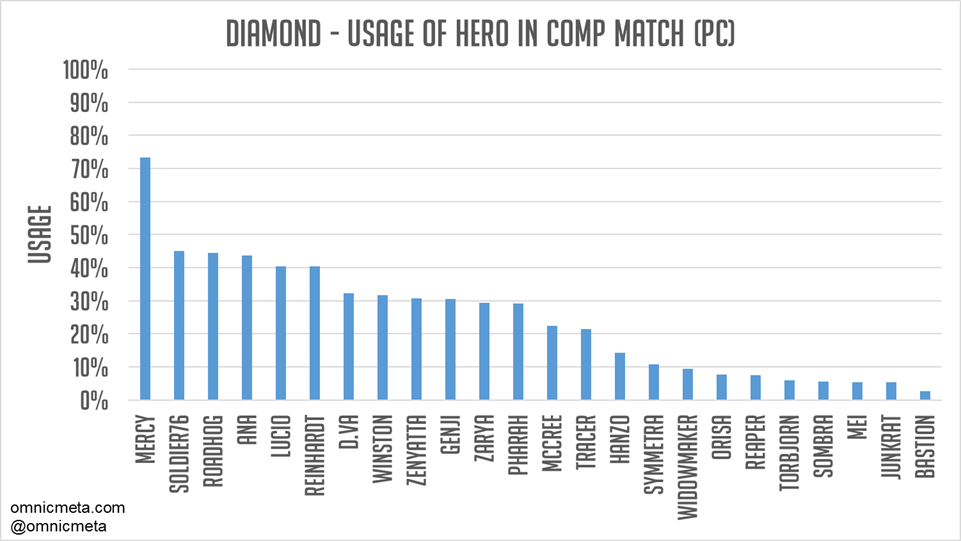 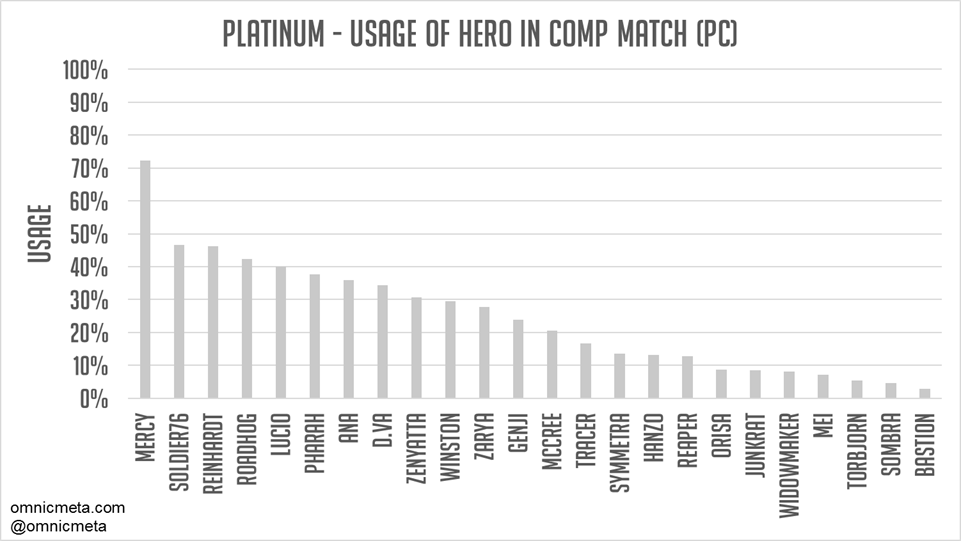 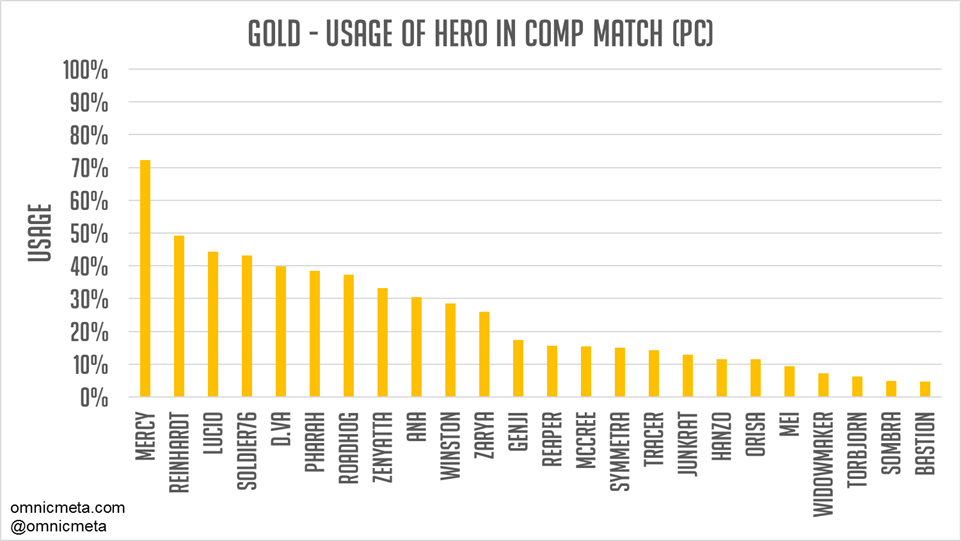 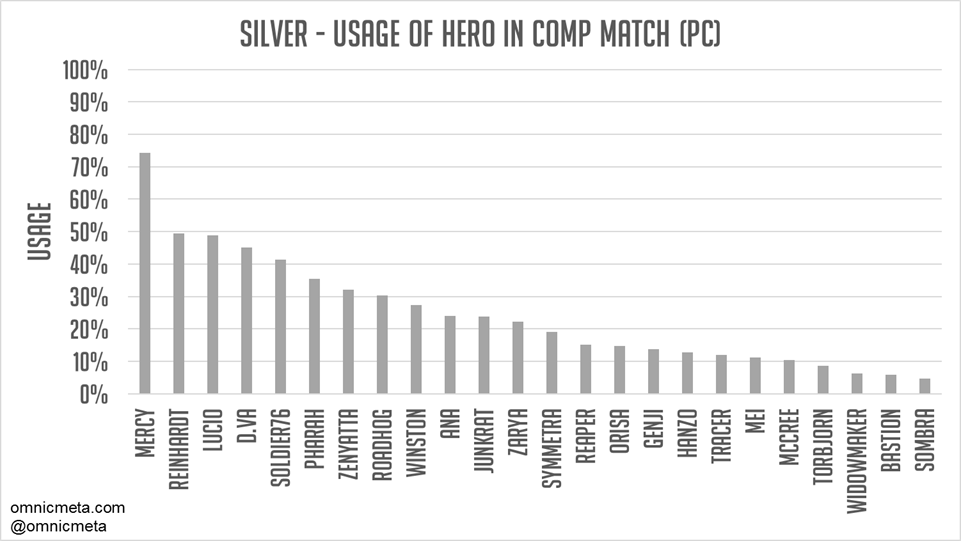 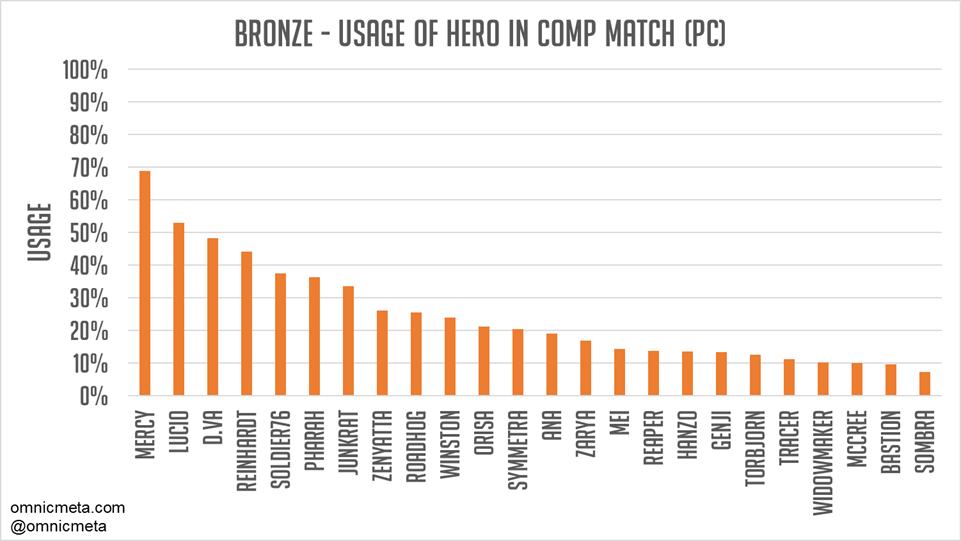