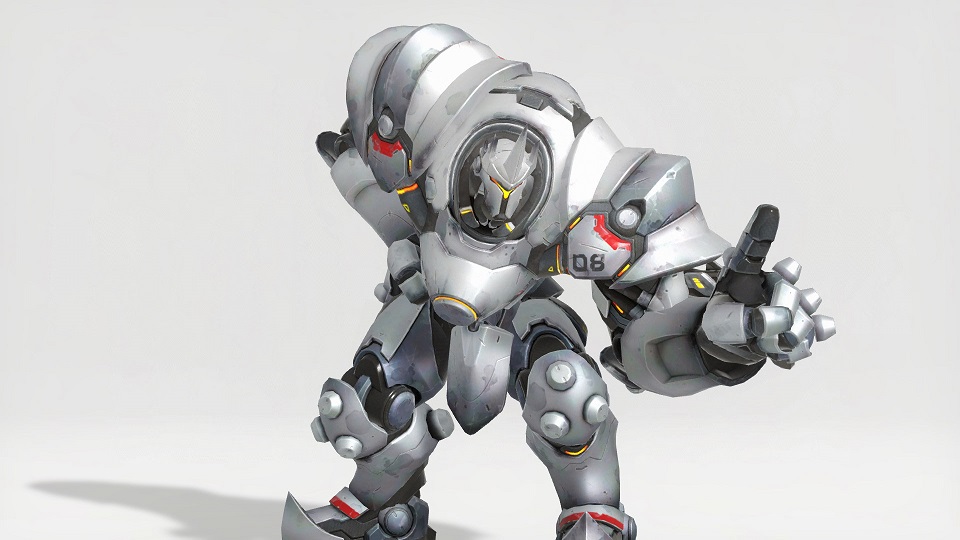 Season 5 is here!  After an eventful Season 4, more changes to the hero meta continue, driven by hero changes and team composition preferences.  The biggest changes in this report can be summed up with "out with the old (aged) heroes".  Reinhardt, Ana, and Soldier and the main victims of these preference shifts this report.  The main driver of these shifts appear to be a stronger preference for aggressive and dive team compositions.

The main trends: Tanks continue to shakeup: D.Va and Winston are the big gaining this week, while Reinhardt's popularity wanes.  After weeks of decline, Reinhardt has almost given up his #1 Tank status that he has held proudly for many months.  The rise of dive and a small damage nerf have also tanked Soldier's popularity as he falls an average of 5% across the tiers.  Hanzo's buffs have increased his popularity significantly for the first time in months - he is up an average of 2% across the tiers.  Finally, the decline of Ana and Lucio continues, seeing decrease across the tiers while seeing big bumps in usage among Grandmaster players.

The infographic above presents the top 2 usage gainers for the competitive tiers. The big usage gainers this week vary depending on the tier, but several trends emerge. First, the growth of dive team compositions: in each tier, a combination of D.Va, Pharah, Tracer, and Winston make the top 2 biggest gainers. The mobility and damage potential of these hero make them perfect for play in aggressive team compositions.  Seeing Hanzo make the biggest gainers list at Gold and Platinum tiers may seem like a surprise to some.  His recent patch giving him a 10% damage per second buff and the ability to maintain charged shots while climbing appears to have increased his popularity for the moment.

As far as the top 2 biggest usage losers this report, Reinhardt make the top of the list at all tiers except Grandmaster.  His decline in popularity since the end of the season has been pretty massive while more mobile tanks like Winston and D.Va have gained.  Soldier is a big loser this week as well; his popularity has greatly decreased after the 5% nerf to his weapon damage.  Ana continues her descent in most tiers - it has become well known that Mercy has taken over the majority primary healing slots in most tiers.  Finally, Roadhog's drop at Grandmaster is a big out of the blue, but somewhat understandable given D.Va and Winston being more suitable for dive team compositions. 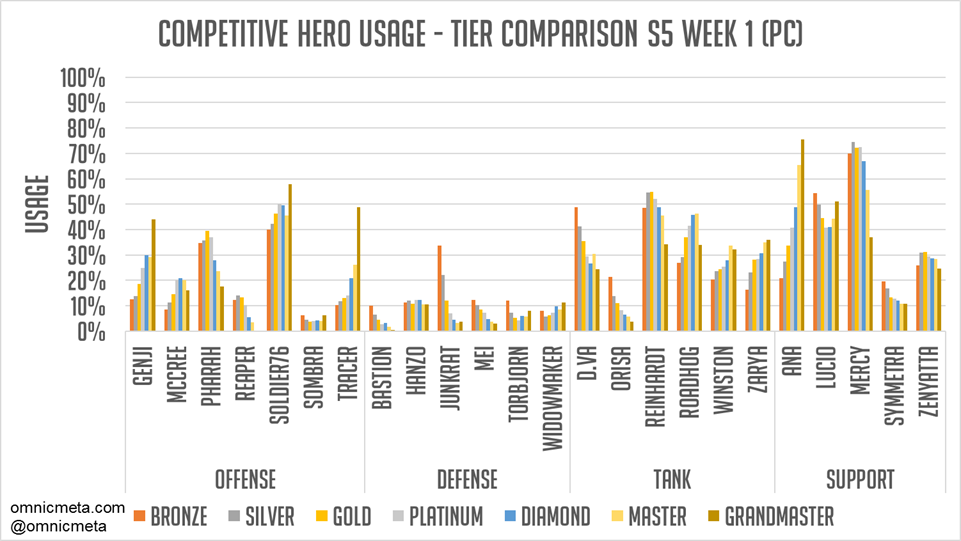 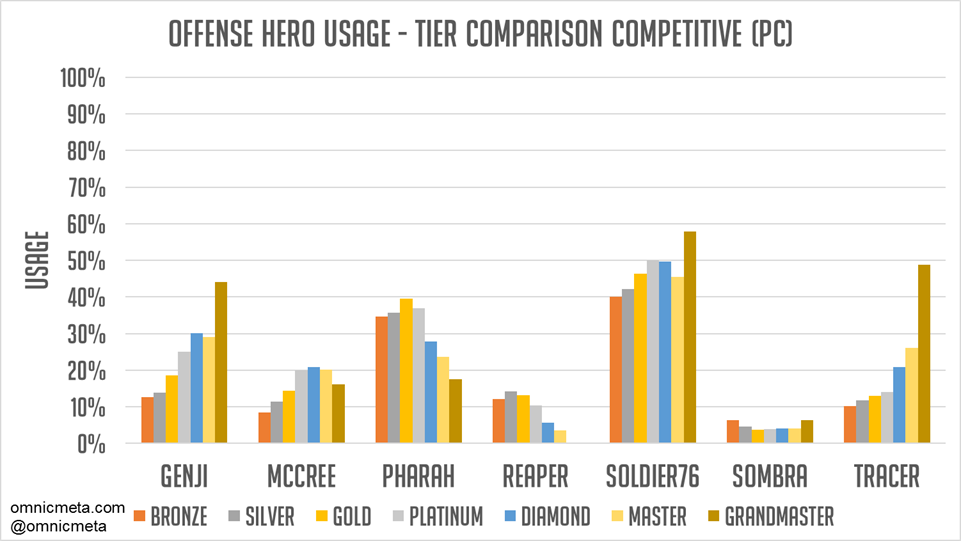 Offense heroes have been shaken up by the nerf to Soldier: 76 and the rise of aggressive dive team compositions.  The general expectation that the 5% damage nerf wouldn't affect Soldier's usage appears to be wrong at this point.  Soldier is down an average of 5% across all the tiers, and is starting to be challenged for the #1 offense slot at a few tiers (Pharah in Bronze -> Platinum, Tracer/Genji at Grandmaster).  As far as popular dive heroes, Pharah increases in popularity at Bronze -> Platinum tiers and is approaching 40% usage.  Both Genji and Tracer appear to be the dive offensive heros of choice in Diamond -> Grandmaster, with Tracer is up more than 5% usage this report.  As a reflection of dive's popularity at higher ranks, McCree has fallen even more out of favor at Master and Grandmaster tiers.  While Sombra and Reaper remain some of the least popular heroes in Overwatch, the PTR changes to Reapers self healing coupled with nerfs to Roadhog may shake things up once the changes go live. 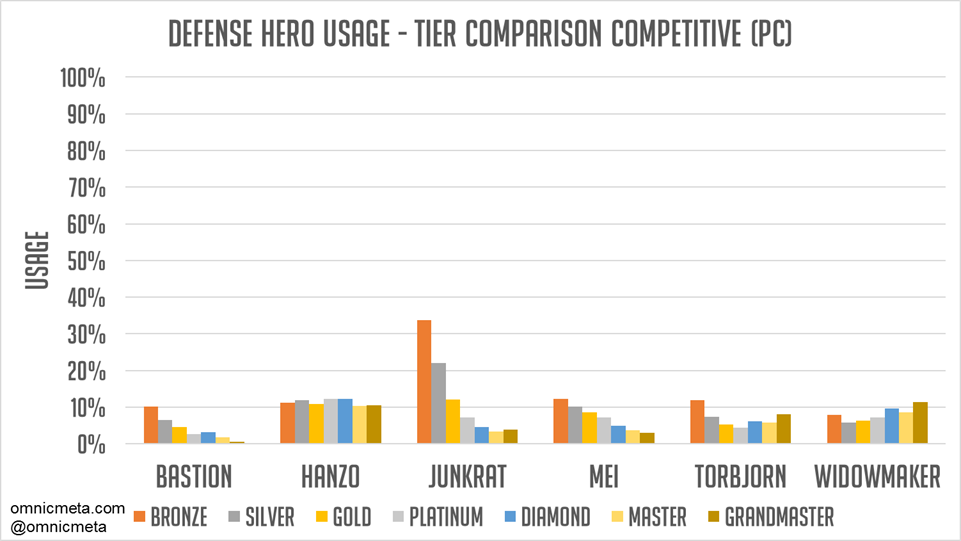 The Defensive category contains some of the most niche and situational heroes.  While defensive heroes in general remain the least popular in Overwatch, Junkrat continues to be the exception at Bronze (34% usage) and Silver (22% usage) tiers.  The recent buffs to his damage appear to increased interest in Hanzo as he sees significant increase in play at every tier.  While he is known as an inconsistent hero, his one-shot kill potential with headshots and scatter arrows make him a hero to pay attention to for the future.  A 15% buff to Soldier was enough to make him one of the most popular heroes in Overwatch; time will tell if the 10% buff to Hanzo will have similar effects.  The remaining defensive heroes (Bastion, Mei, Torbjorn, and Widowmaker) remain uncommonly seen across all tiers 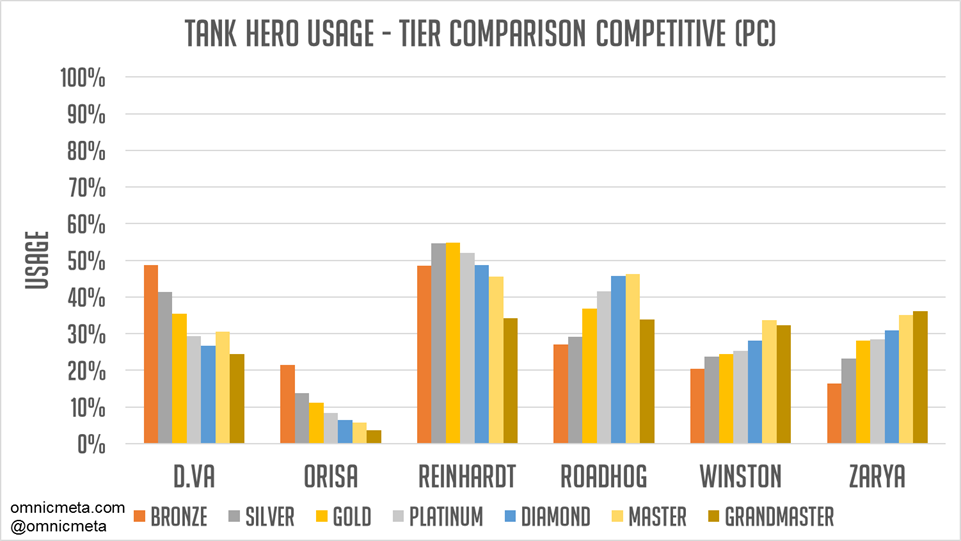 Dive team composition continue to shape Tank hero usage.  Looking at the usage ratings, 5 of the 6 Tanks are being heavily used in competitive play.   Reinhardt has completely sunk this week, down an average of 8% across the tiers, while making room for big gains from dive heroes D.Va and Winston.  Reinhardt's nerf to his earthshatter height and well as many reported bugs such as hammer swings registering hit incorrectly seem to be contributing factors.  Roadhog is directly competing for the #1 tank slot at Diamond -> Grandmaster, though the PTR changes on the horizon make his future quite uncertain, as his signature ability to one-shot heroes has been severely nerfed.  Despite losing usage at every tier, Zarya remains a popular hero with her ult and projected barrier still being powerful, especially for Heros such as Genji and Tracer.  Finally, although receiving a huge buff to her shield, Orisa has not increased in popularity, like due to her abilities and slow movement not fitting in with agressive team compositions. 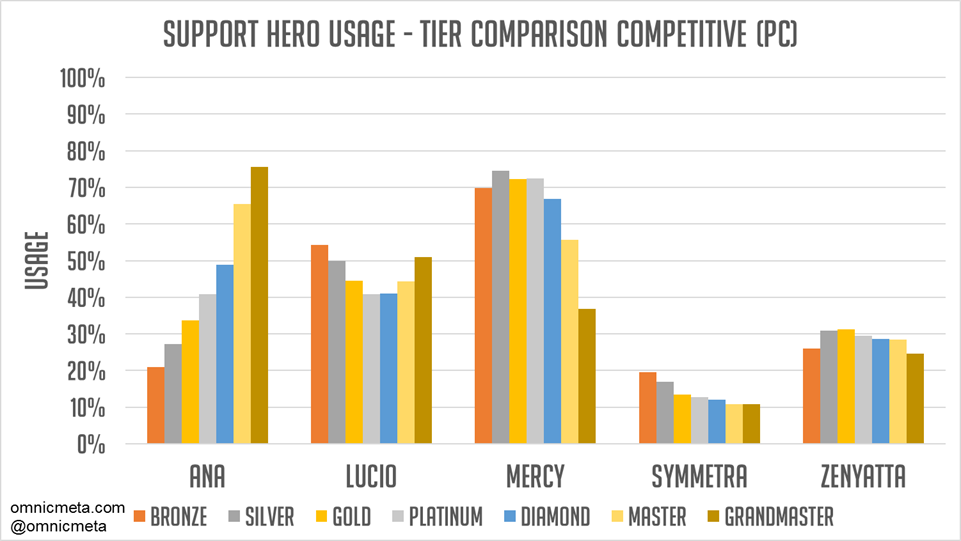 Supports continue to shift as a continuing trend from Season 4.  Ana continues her rapid drop after her damage nerf many weeks ago, down an average of 4% across Bronze -> Master tiers.  Mercy continues to establish her position as the most popular Overwatch hero overall, and may soon overtake Ana for the #1 support spot at Master. Similarly, Lucio continues his drop after his aura radius nerf, down 2% across most of the tiers.  He is still a critical piece to dive team compositions, though his skill floor has been increased considerably.  In the near future, we may find players master the changes and better exploit his damage and mobility buffs.  Zen continues to be a big winner from the rise of dive team compositions with his harmony and discord orbs, gaining more usage in Diamond -> Grandmaster tiers.  Symmetra remains a situational niche pick and the least popular support hero in Overwatch. 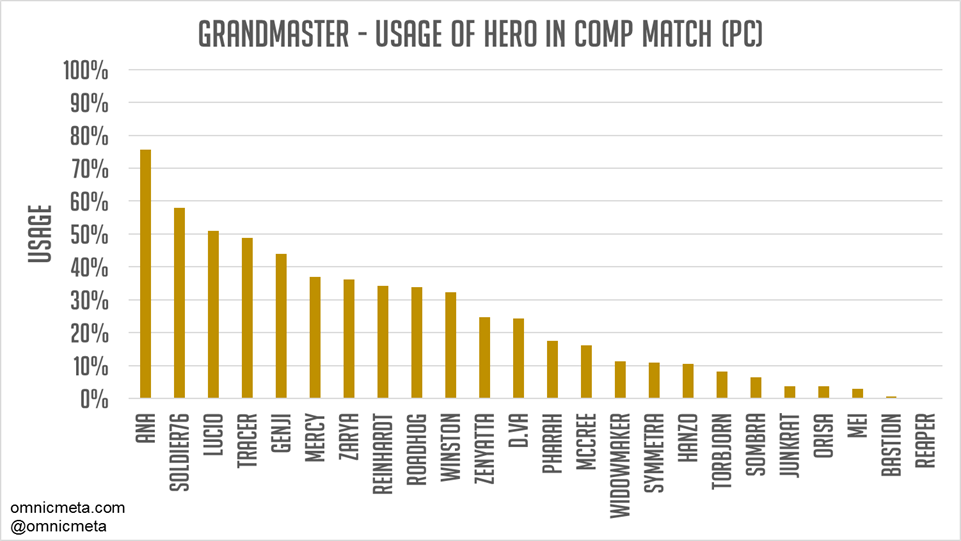 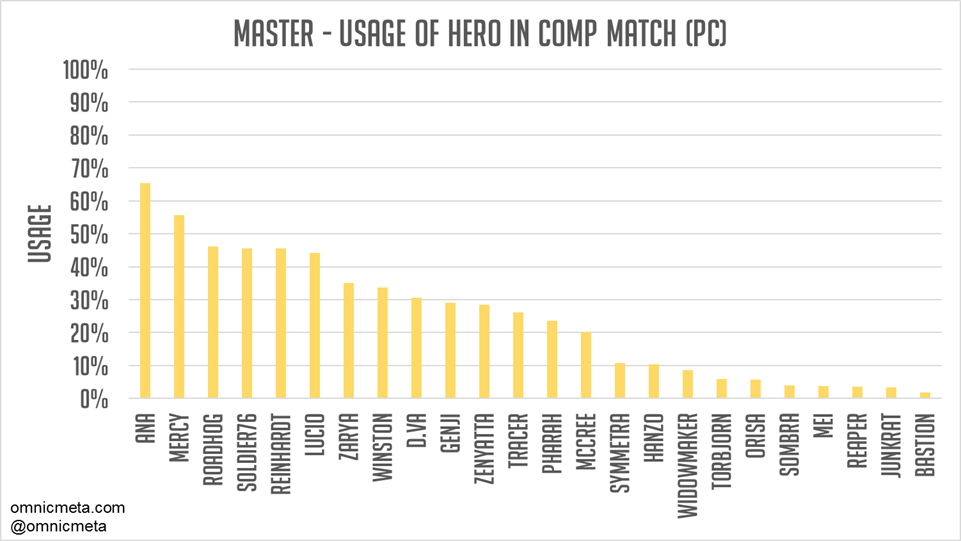 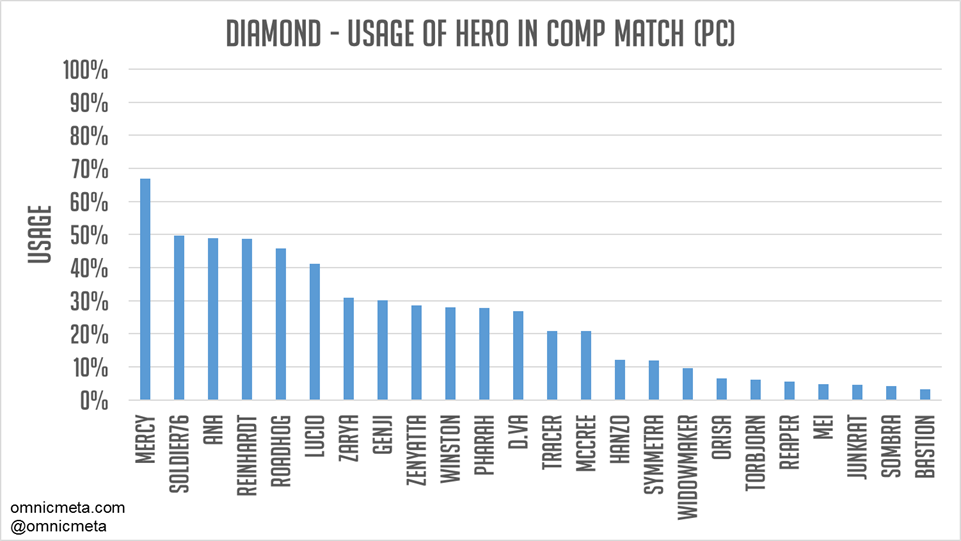 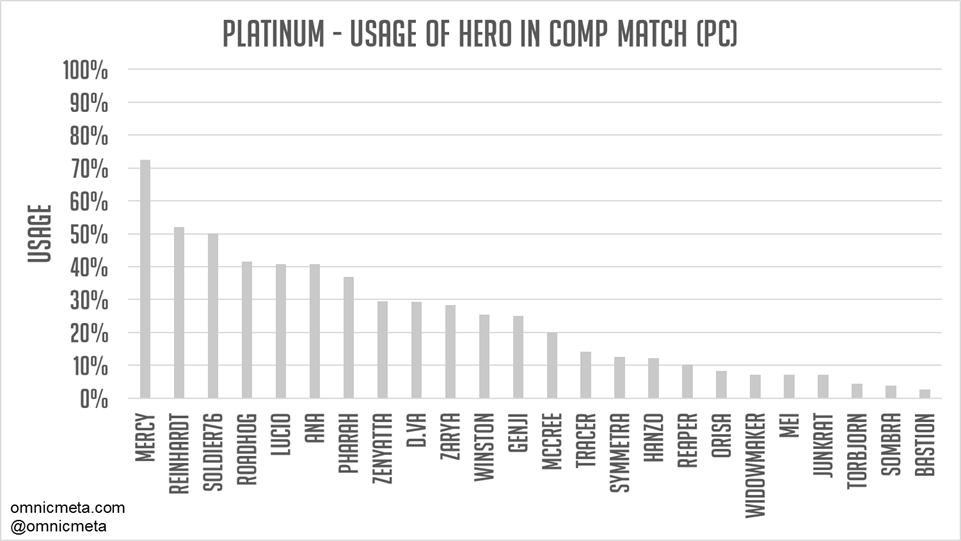 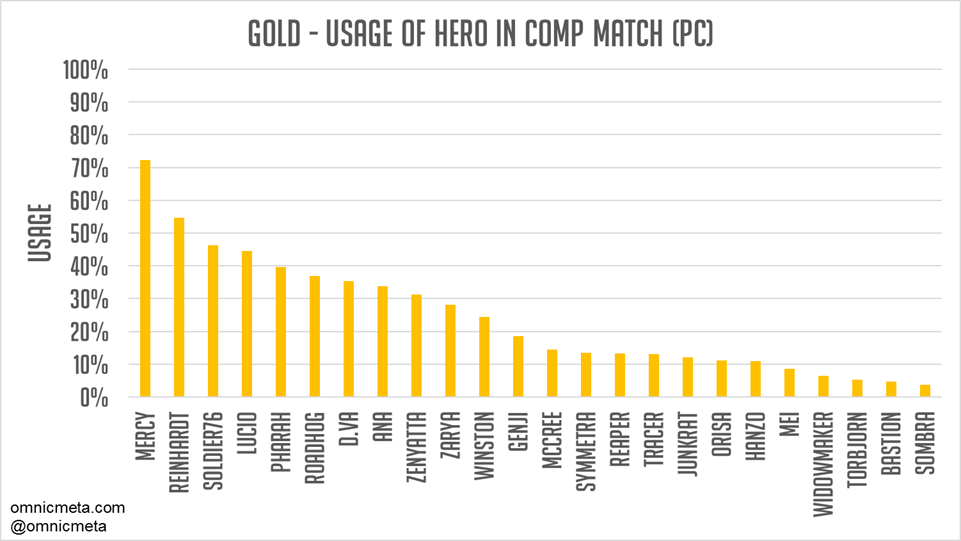 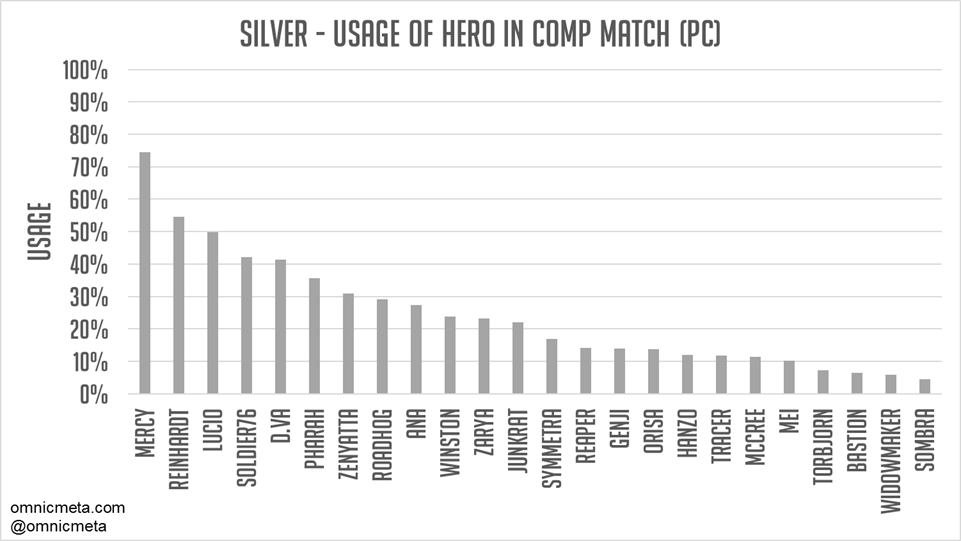 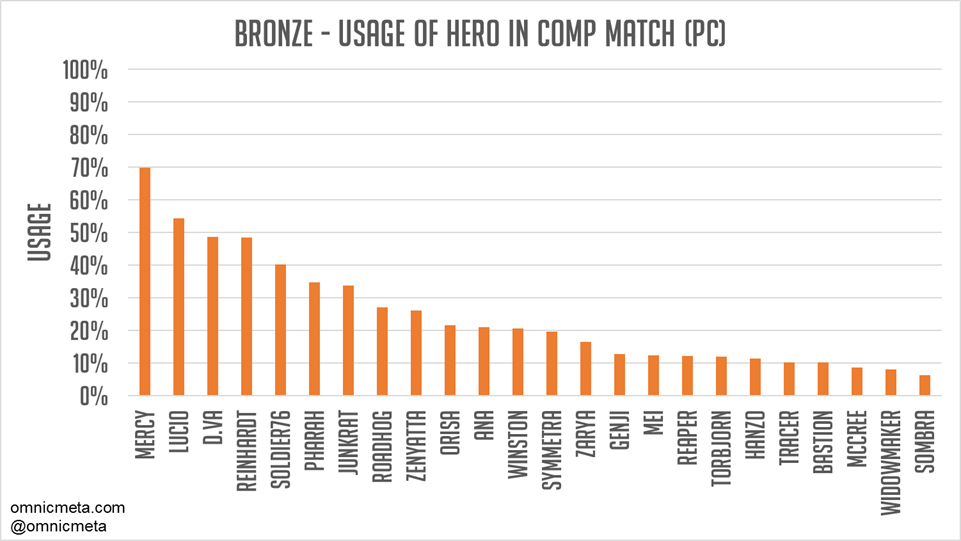