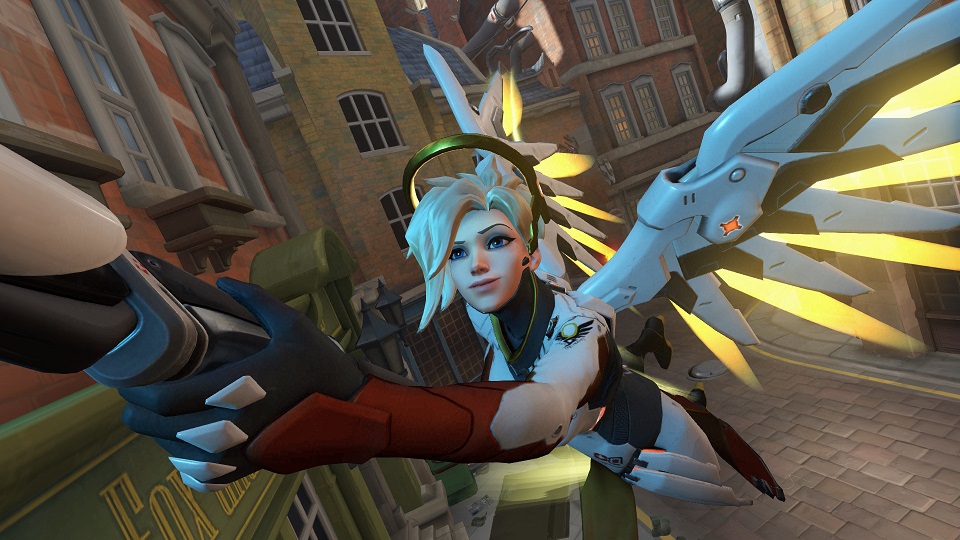 How smug must Mercy be? She continues to rise while her rival Ana falls - a continuing trend since the beginning of the season. While Offense and Defense heroes appear to have somewhat stabilized, there are still some significant shakeups among Tanks and Support heroes.
The main trends: Orisa and Winston continue to shake up Tank play, as Reinhardt, Zarya, and Roadhog are feeling more competition. And as if she couldn't be played any more, Mercy usage continues to grow, (+5% at Master and Grandmaster), at the expense of Ana. 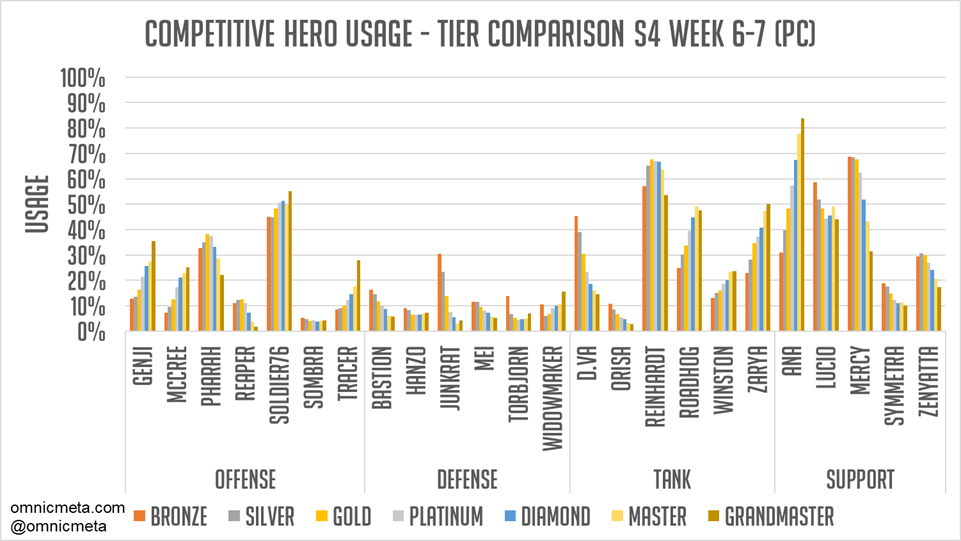 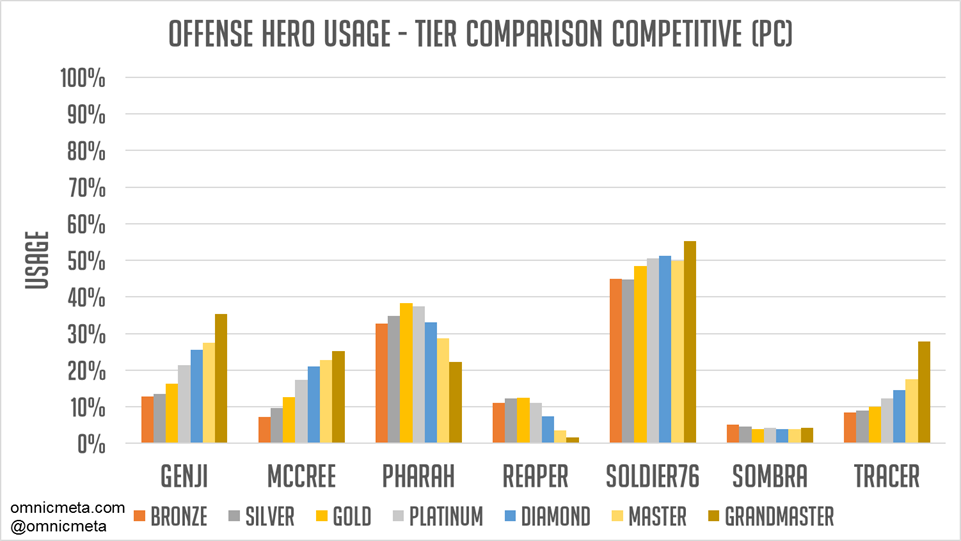 Offense hero usage continues to be very diverse but appears to have mostly stabilized. Soldier remains the most picked offensive hero across all tiers, and has been since the end of season 3. He is an all-around hero that is played extensively with nearly all compositions in the professional scene, and arguably has a low skill floor and a high skill ceiling, as evidenced by consistent pick rate across tiers. The big changes in usage this week are with Pharah and Genji. Pharah is still quite popular and often is paired with Mercy and run in dive compositions. She sees increased popularity among Masters players, and decreased in popularity at Diamond and Grandmaster. Genji is a key piece of dive compositions, with a strong offensive ultimate ability which can be paired with popular tank Zarya's graviton surge. Genji usage is up in most of the tiers this time, with Diamond and Grandmasters players seeing the biggest increase. Tracer and McCree remain most popular at higher tiers due to their high skill ceiling, seeing no change in popularity from the last report. Reaper and Sombra continue to be niche picks, seeing no major changes in hero usage. 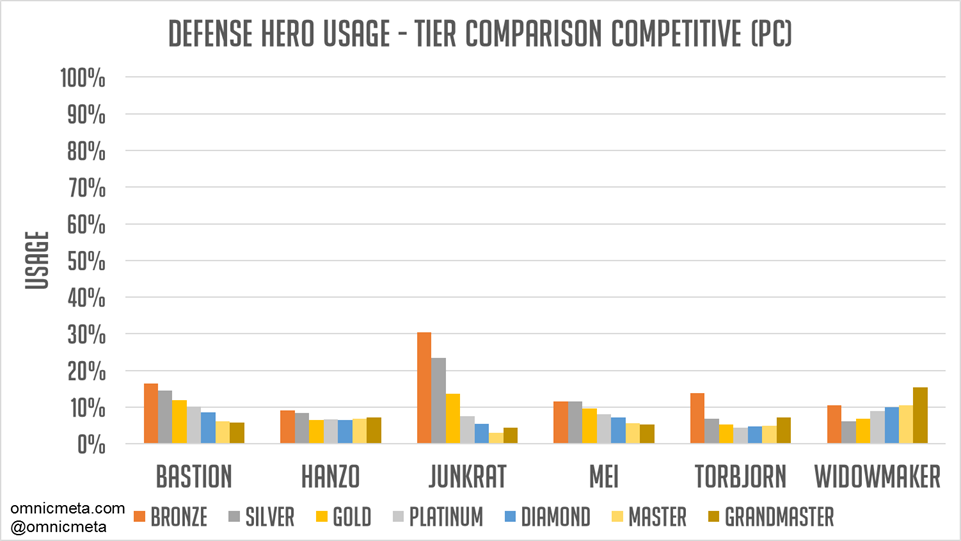 The Defensive category continues to be the least popular category in Overwatch. Nearly all the heroes have a sub-10% usage rate, with the general exception being at low tiers. At low tiers, Junkrat is extremely popular, with a 31% pick rate at Bronze and 23% at Silver. He did get a small buff which removes damage from his explosives, enabling Junkrat to engage in more close-range combat. The other defense heroes that make the tier lists this week are Bastion (Bronze/Silver) and Widowmaker (Grandmaster). Widowmaker is an interesting pick especially as she fits into dive compositions if (and only if) she can get quick kills - and her incredibly high skill ceiling is likely why she is most popular at Grandmaster. The other three heroes remain niche picks for various reasons; Mei and Torbjorn are more situational heroes that are especially good on capture point maps, while Hanzo has an incredibly high skill ceiling, while being arguably inconsistent due to reliance on accurate aim. 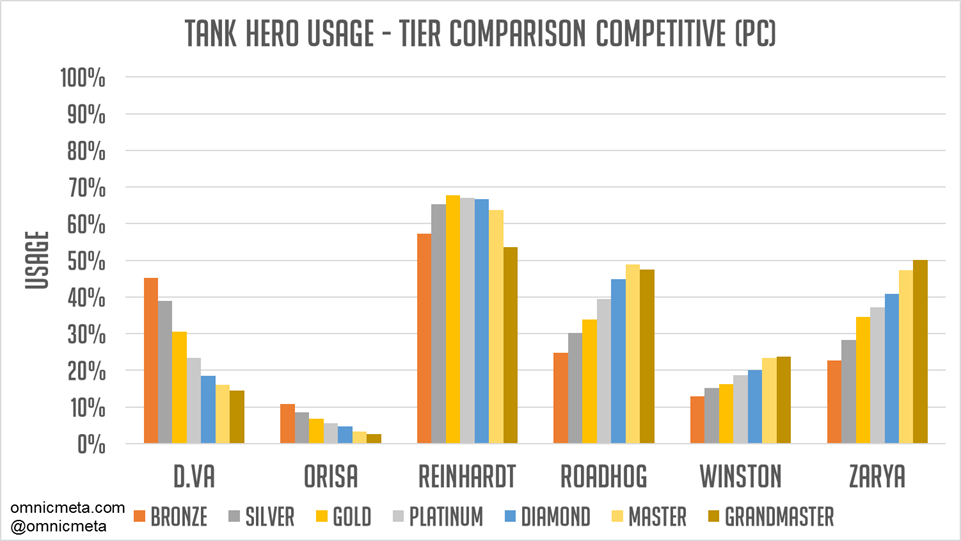 Tanks continue to see an evolution since the changes to Winston and introduction of Orisa. Reinhardt remains the most popular tank across all tiers, but surprisingly he is also the tank that is seeing the largest decreases in usage. Orisa has been available for competitive play for several weeks now and while she is more popular at lower tiers, so far she has not cracked the tier list. While evidence seems to support her viability, time will tell if she catches on. For the moment, the Overwatch community seems to be continuing to see Reinhardt as the only true "anchor tank", though Blizzard is pushing Orisa as an alternative. Winston continues to grow in popularity for the third report in a row, and an average of 2% for this report. He is nearly at 25% usage across the Master and Grandmaster tier. Overall, Winston's ability to fit into dive compositions and the reduced cooldown on his protective barrier seems to increased his strength in the meta. D.Va continues to be popular at lower tiers, though this week we see a +3% increase in usage at Grandmaster. Roadhog and Zarya remain popular at high tiers, as Zarya's projected barrier / ultimate and Roadhog's hook / weapon remain strong. 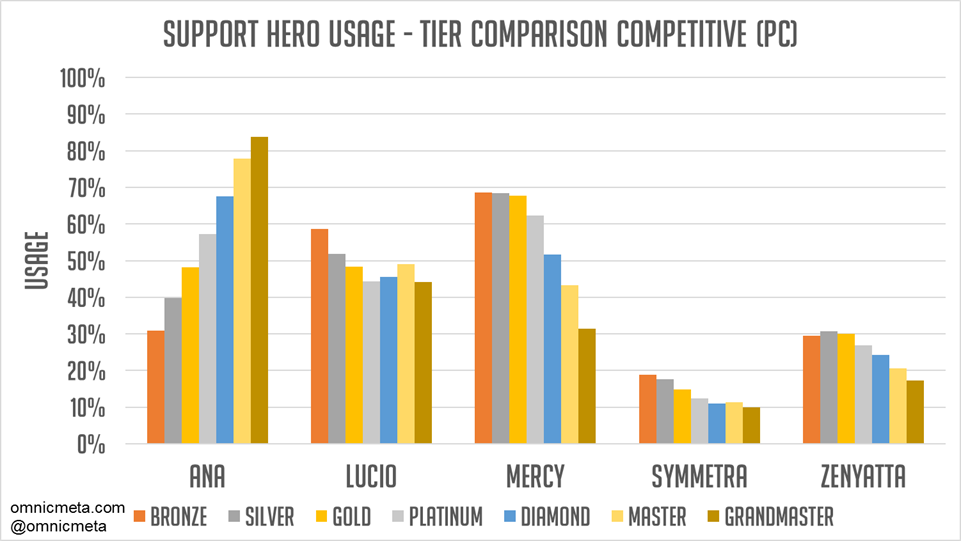 Support usage continues to evolve with recent patch and team composition changes. As a continuing trend since the beginning of Season 4, this report Mercy popularity continues to rise while Ana popularity continues to fall. Mercy is now the #1 most used hero in Bronze, Silver, and Gold (tied at Gold with Reinhardt). She continues to fit into most team compositions, pairs with popular DPS hero Pharah to great effect, and provides arguably one of the most impactful ultimate abilities in the game. Ana remains incredibly popular at high tiers, though down 6% at Grandmaster tier this report. While her nerfed rifle damage appear to have hurt her usage, the burst healing of her biotic grenade and ultimate shutdown ability of her sleep dart are still strong. Lucio continues to be the #2 most popular support at most tiers; however it is still unclear how much the rework to his kit (released less than a week ago) will affect his usage. The changes are very drastic, as Lucio's AOE radius is  severely nerfed while otherwise his individual abilities have been buffed. It will be much more difficult to keep teammates within the aura radius, so we will see if that affects his usage - particularly at lower tiers. Zenyatta continues to see strong usage at most tiers. The recent rise of dive compositions make his discord orb and harmony orb much more useful for eliminating opponents quickly and healing high mobility heroes like Genji. Symmetra continues to be a niche hero with a strong supporting kit that is good in some situations and map types. 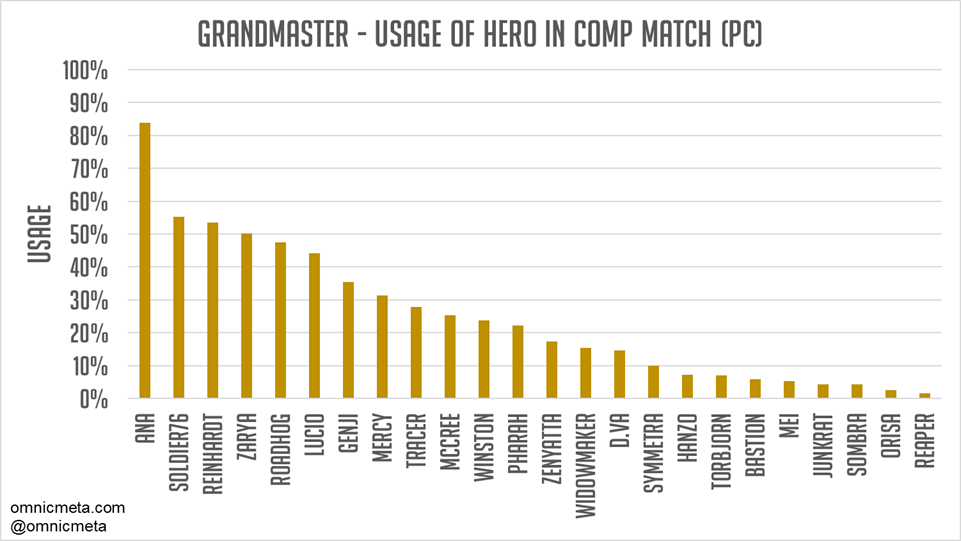 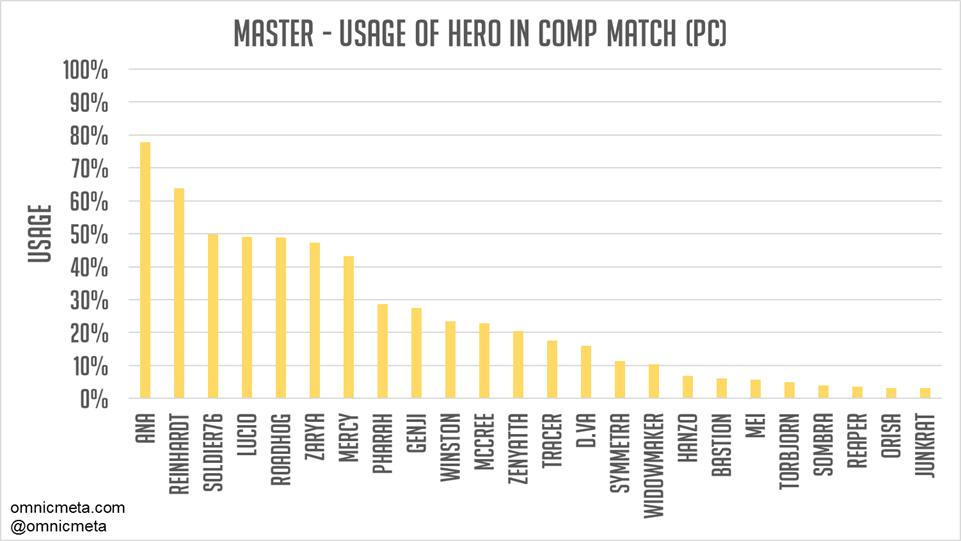 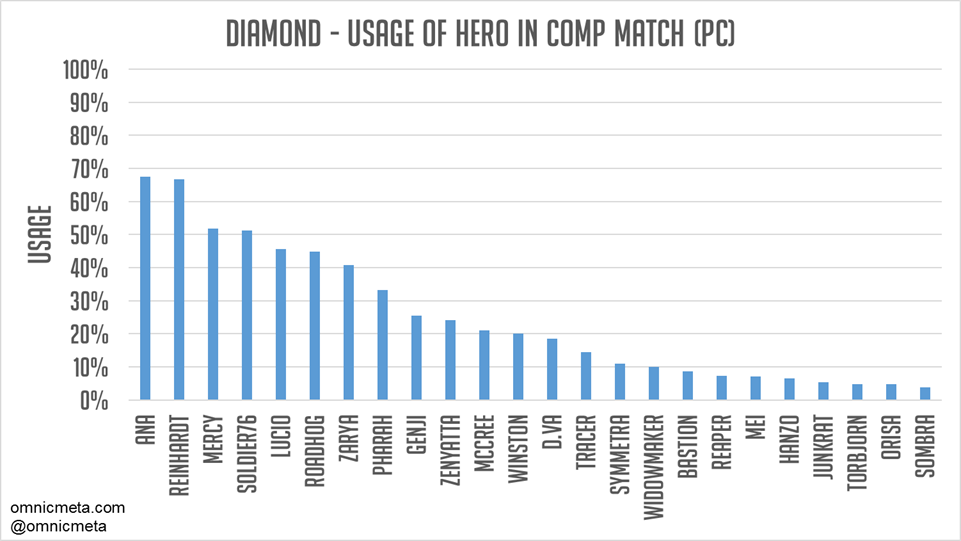 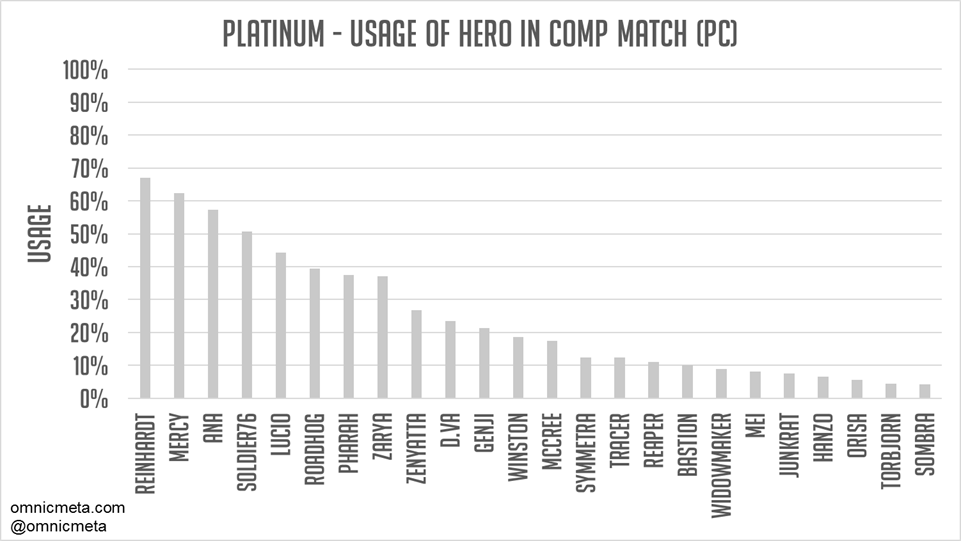 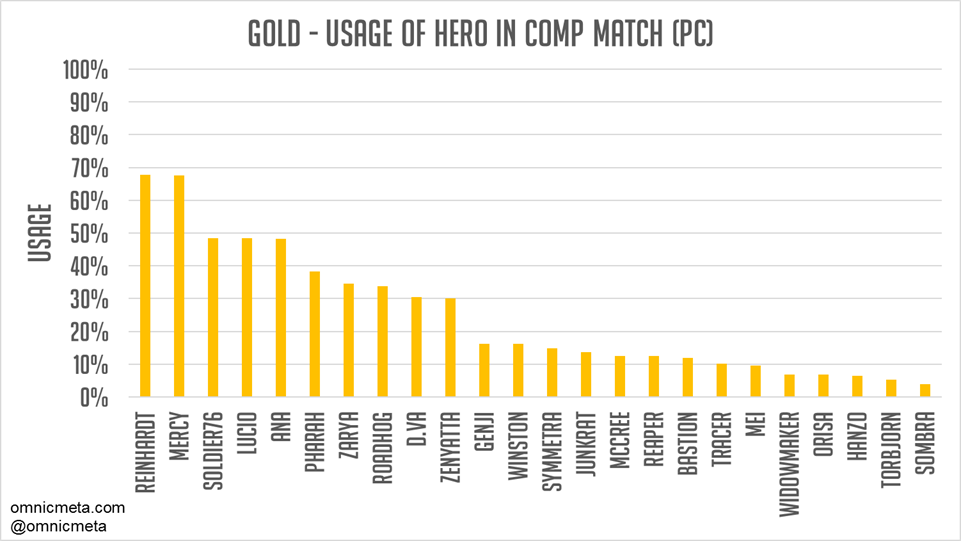 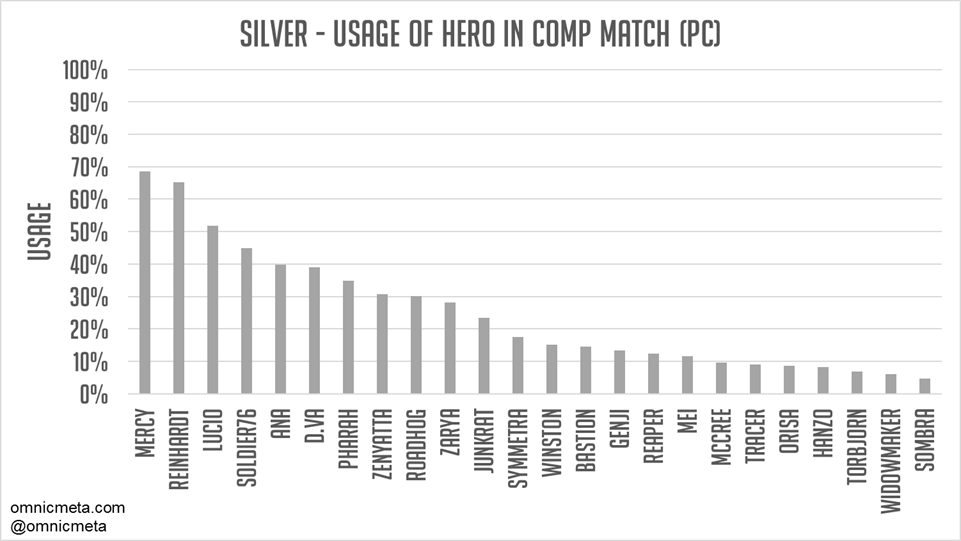 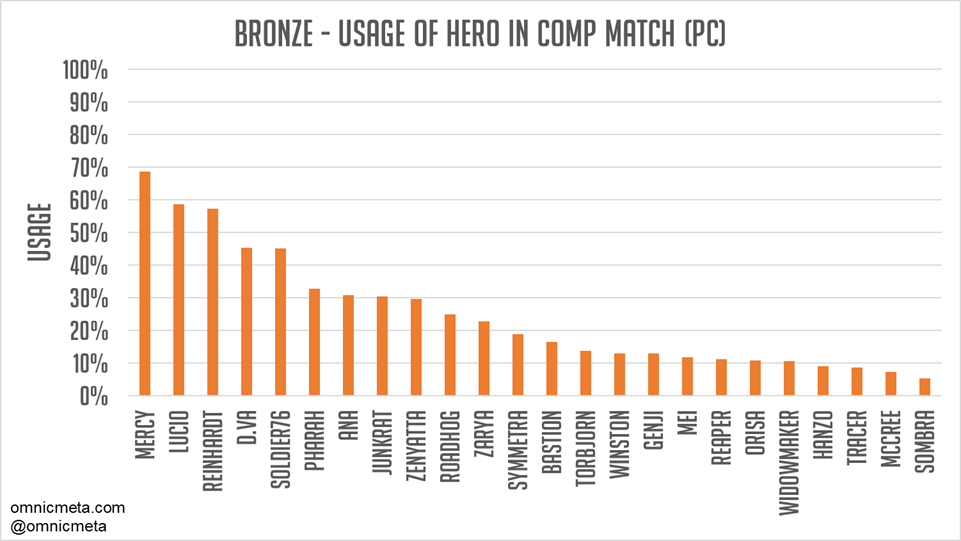