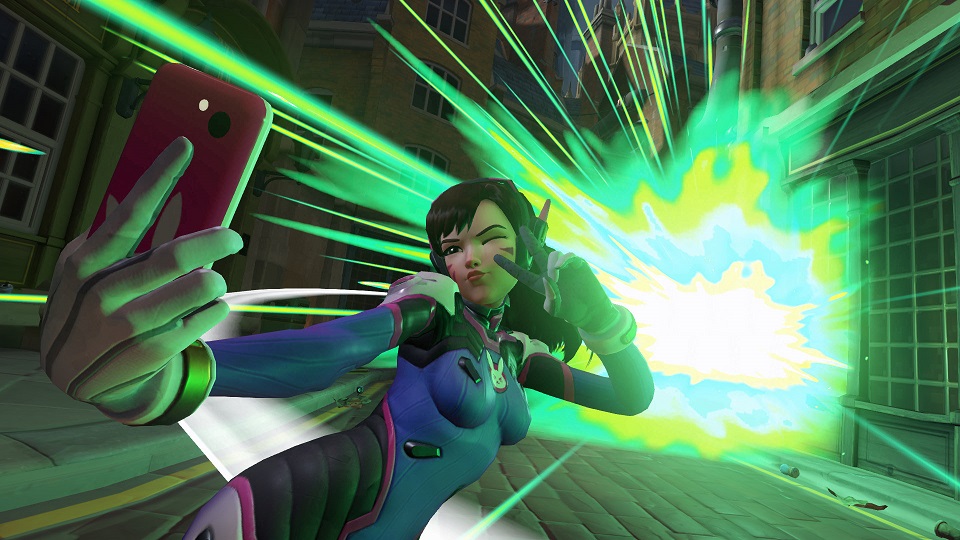 Tanks have a been a staple for the game for many months now, providing high-health heroes with a wealth of game-changing abilities. The diverse set of team compositions currently seeing competitive play in addition to Orisa and buffs to Winston have enabled every single Tank to be a viable option and heavily played in competitive mode. No other category, be it Offense, Defense, or Support, can claim that fact, as each of those categories has at least one black sheep that seems to be niche. However, hero preferences continues to shift in these other categories as well.
The main trends: Tank play has been completely shaken up, with Orisa, Winston, and even (mostly) forgotten D.Va seeing much more play. They appear to have gained at the expense of Reinhardt and Zarya, who have lost significant popularity. It's really any tank's game now, as virtually all tanks are above 20% usage depending on the tier. Genji and McCree have surged in popularity As a continuing trend, Ana has fallen out of Tier 1 status even at Master and Grandmaster, as Mercy continues to grow in popularity. 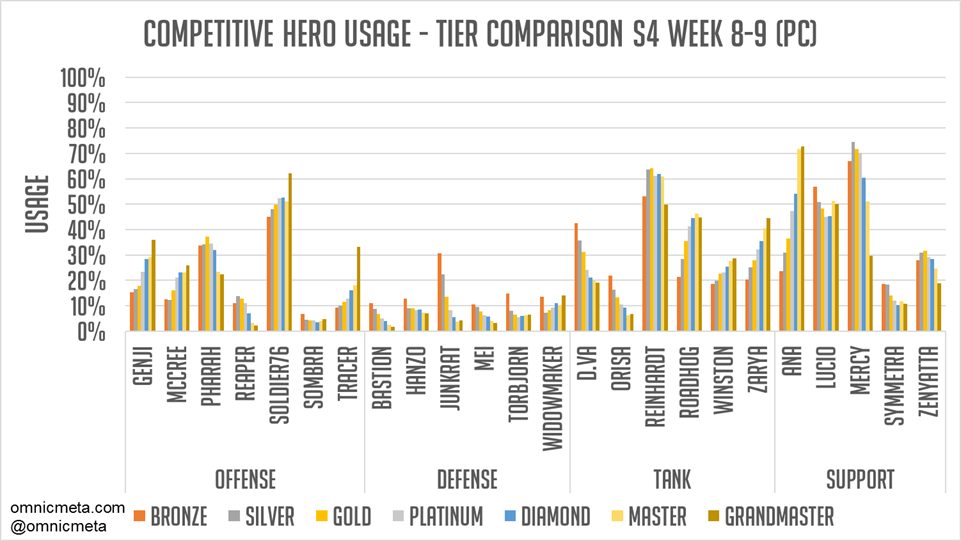 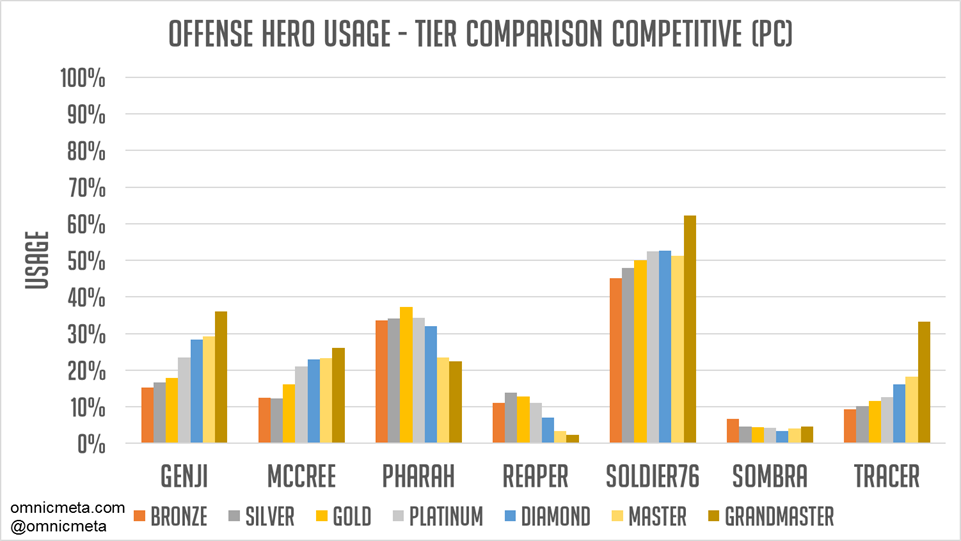 Offensive hero usage continues to evolve. Soldier remains the clear front runner for most popular offensive hero, as he has been since the start of Season 4. Soldier's high damage primary fire, weapon range, healing station, and aimbot ult enable him to be a top contributor to many team composition. Genji's usage has flourished across the tiers (up 2.5% average), likely due to the continued prevalence of dive and 2/2/2 team compositions. With the latest minipatch fixing some bugs related with his ultimate ability (word swing speed and registering hits), we will see if those fixes encourages more players to choose him in competitive play. Tracer is also benefiting from flanker popularity, though she is somewhat only very popular in Grandmaster and more rarely seen in other tiers. Pharah continues to be the #2 most popular offensive hero at tiers Bronze -> Diamond. Despite Mercy continuing to grow in popularity, Pharah's popularity has remained roughly the same since the last report. Pharah, Genji, and Tracer benefit from comboing ultimates with other currently popular heroes such as Zarya and Ana. McCree's popularity continues to rise in the lower tiers, as his usage has increased by 3.5% in tiers Bronze -> Platinum. His flashbang ability is particularly useful for dealing with flankers, and his primary fire helpful for dealing with the ever-prevalent Pharah.There continues to be active community discussion on whether Sombra and Reaper deserve a buff or kit rework. Regardless, Reaper remains a pick mostly played a low tiers (albeit infrequently), while Sombra is the least popular hero in competitive Overwatch. 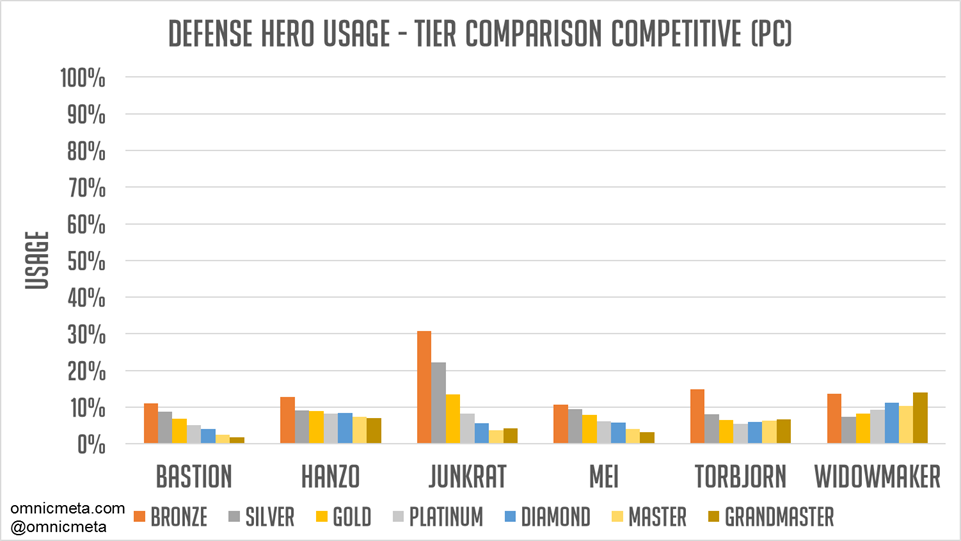 Bronze tier continues to appreciate defensive heroes much more than other tiers. However, the Defensive category generally contains a group of heroes which continue to be considered niche for competitively play. With the lone exception of Junkrat at the Bronze and Silver tiers, no other defense hero has a usage rate of above 15%. Bastion continues his fall from glory, down another 5% on average across the tiers this report. His popularity is essentially what it was at the end of Season 3 - before the kit rework. The other heroes (Hanzo, Mei, Torbjorn, and Widowmaker) remain very uncommonly seen across all tiers. 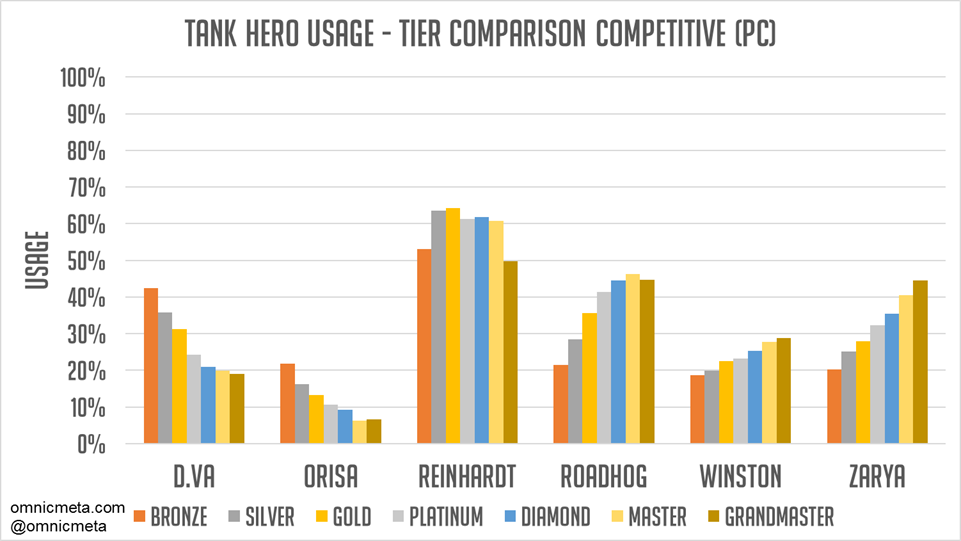 Major shakeups in Tank usage continue this report, following the release of Orisa and buff to Winston. Orisa has gained an average of 5% usage this report, being most popular at lower tiers while even seeing play on control maps in the professional scene due to her "mini-graviton surge" ability "Halt". Winston has been one of the biggest movers in recent weeks after the effective reduction to his barrier cooldown. He is up an average 5%  in hero usage (and up 10-20% since the beginning of the Season 4) as dive compositions remain very popular. Perhaps the biggest news and surprise is that after weeks of decline, D.Va has seen greatly increased popularity at higher tiers. She is up 5% at Grandmaster and 4% at Master this report. A likely explanation for this change is that D.Va has seen increased play at the professional level, and it's probable that the e-sport scene's influence is finally starting to trickle down. It seems likely that the increase in D.Va play is coming from the strength of her defense matrix ability, which has been used to great effect in the professional scene.

Note that Tank play on the whole has not increased, which means that other heroes have actually declined in usage. The main victims are Reinhardt and Zarya , who are both down an average of 5%. Despite this decline however, both heroes remain incredibly popular. Reinhardt remains the most popular tank in the game, and the community still generally views him as the only true anchor tank in Overwatch. Zarya and Roadhog remain the key competitors for the #2 most popular spot in tiers Platinum -> Grandmaster, as higher tiers can exploit the high skill cap of those heroes. Accurate hooks from Roadhog and timely shields and ultimates from Zarya really showcase the strength of those heroes. 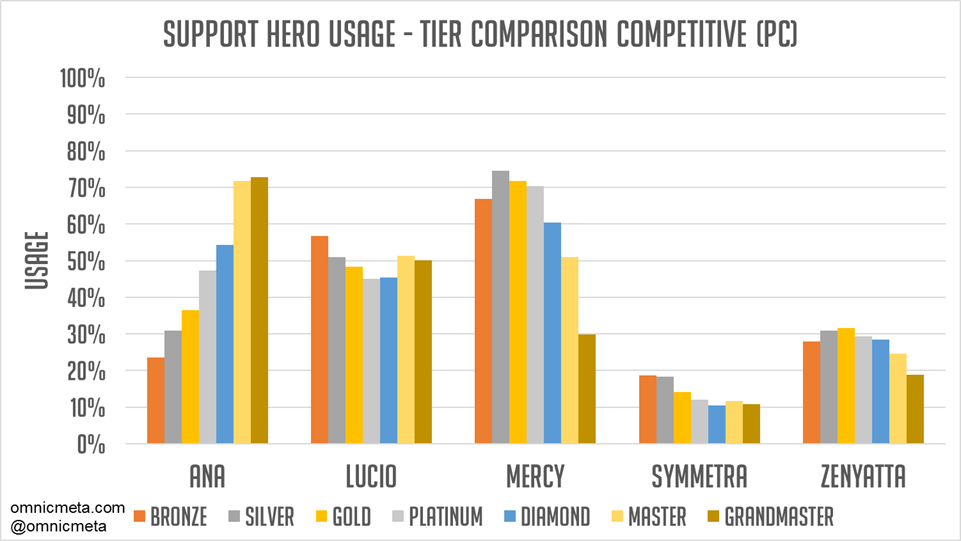 Support popularity changes continues to revolve around Mercy and Ana. Mercy has been one of the biggest stories this season, coming from being somewhat of a rarity in higher tiers to now being a staple at all tiers of play. She is the #1 hero overall in tiers Bronze->Platinum, and approaching Tier 1 status in several of those tiers. Regardless of player's opinions on the utility of Ana vs. Mercy, Ana is still on the decline in popularity. She is no longer above the 75% threshold we use for Tier 1, and now is the #1 support at Master and Grandmaster only. In the several weeks since a complete kit rework (and huge nerf to his aura radius), Lucio's popularity remains just as strong as ever. It appears that on the whole, most of the tiers are viewing the changes as a net buff. Zenyatta still remains semi-popular and useful in dive compositions, while Symmetra remains a niche pick most useful on first points and assault maps. 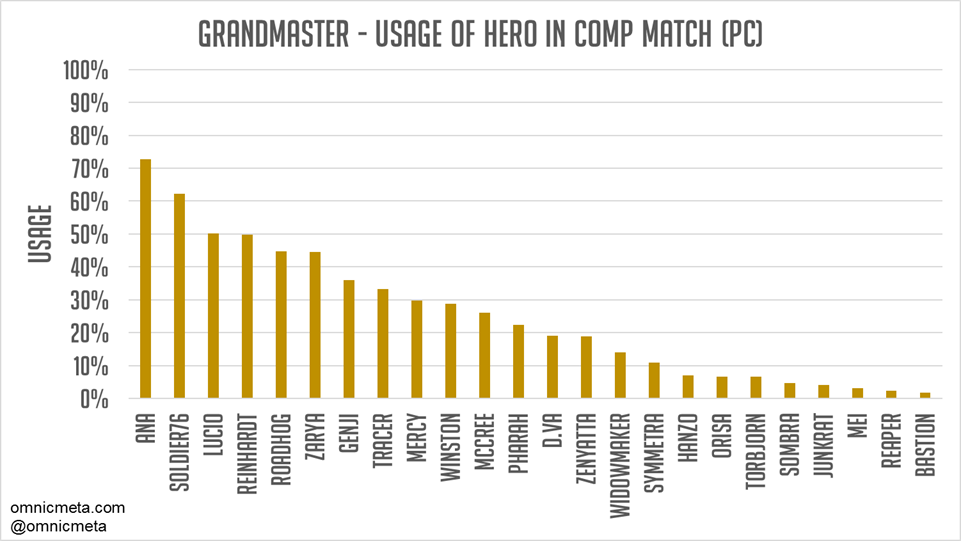 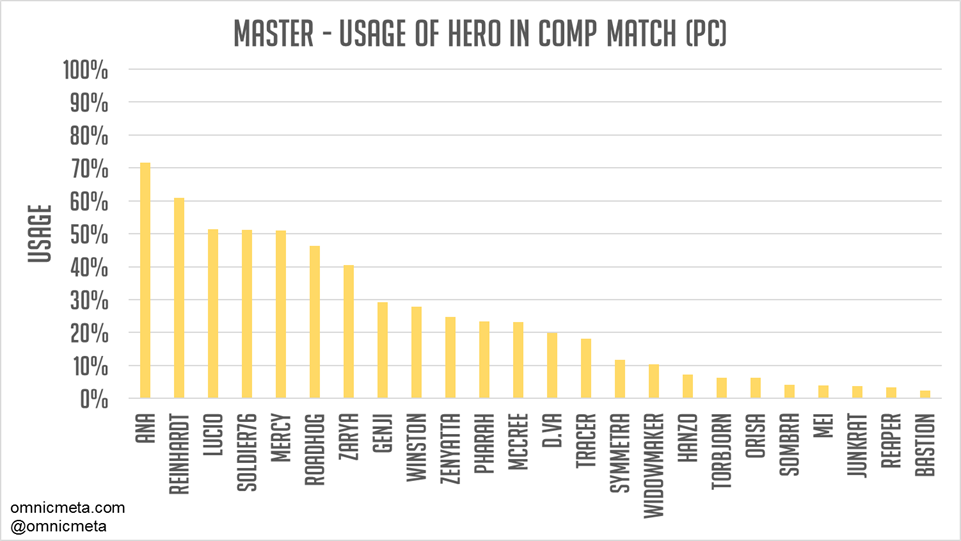 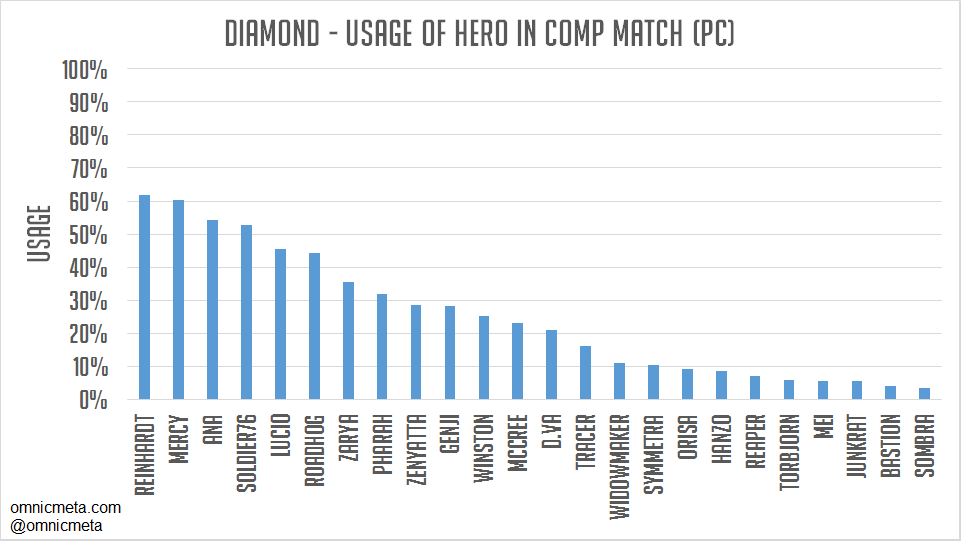 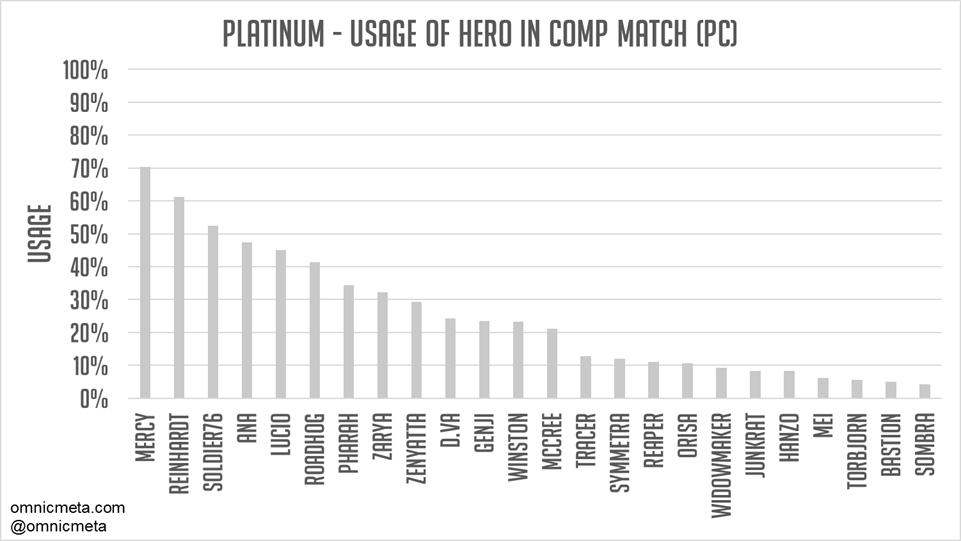 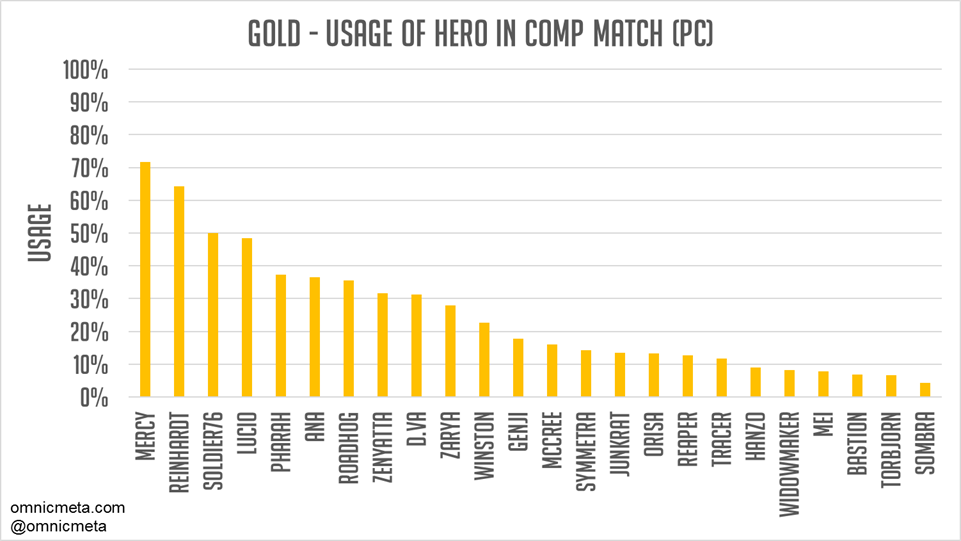 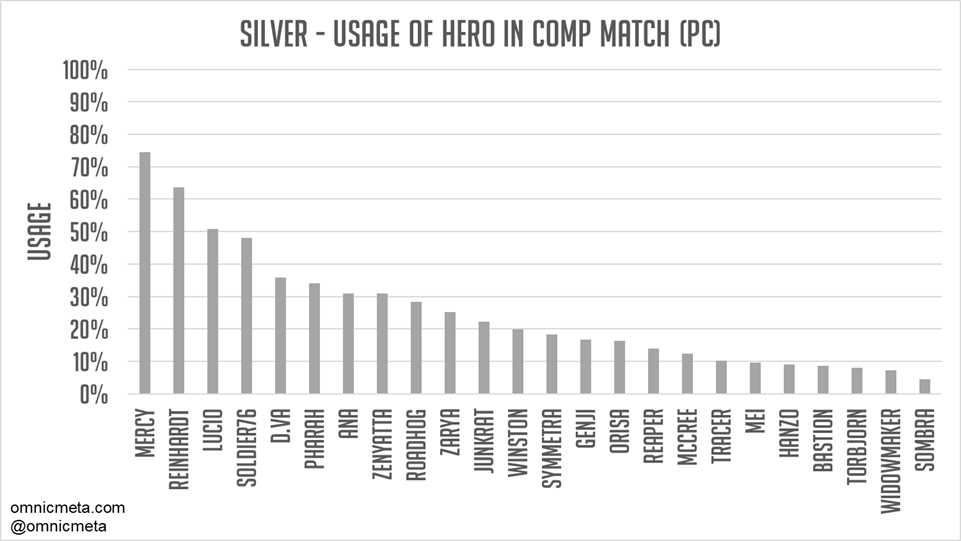 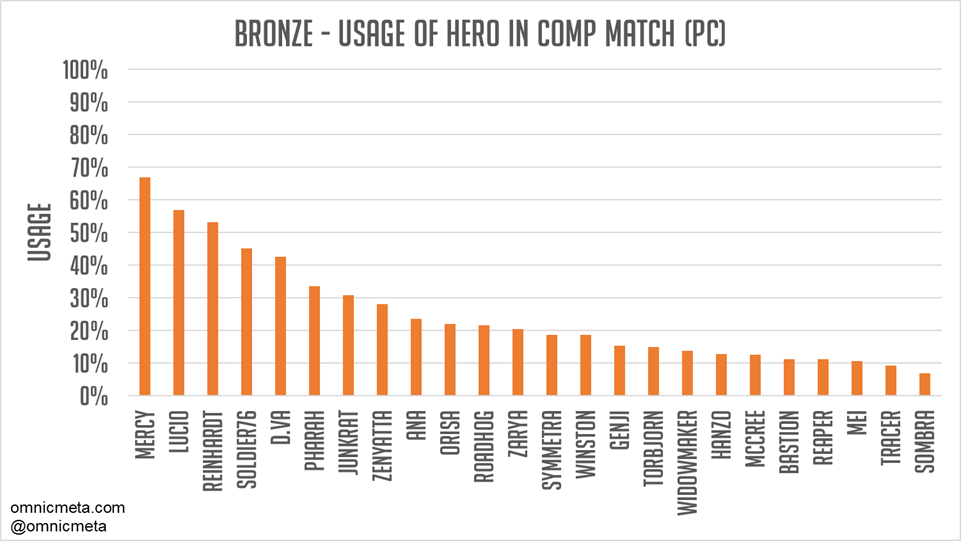