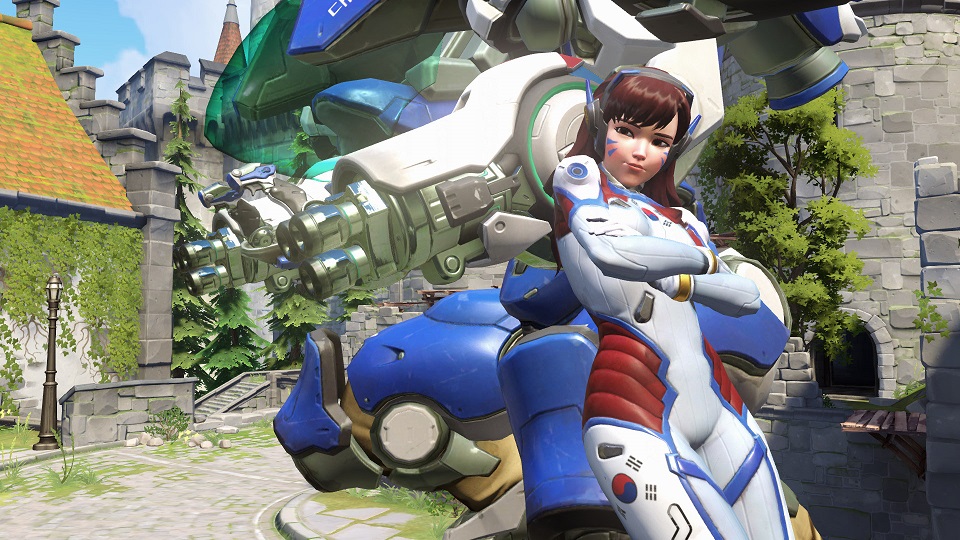 As Season 4 starts to wind to a close, there continue to be shakeups in the Overwatch competitive mode on PC.  Tanks and supports are seeing the biggest changes in popularity, as buffs/nerfs and team composition preferences are affecting which heroes are in the meta.   With more hero changes looming on the horizon, it seems as though we will have a very different meta at the end of Season 4 than the meta at the start of Season 4.

The main trends: Shockingly, Lucio has the biggest loss of usage this report (possible due to kit changes), while Ana continues to fall and Mercy gain.  D.Va is the biggest gainer this report, as Roadhog also gains and Reinhardt and Zarya fall.  Soldier is as popular as ever, with Genji growing in popularity . 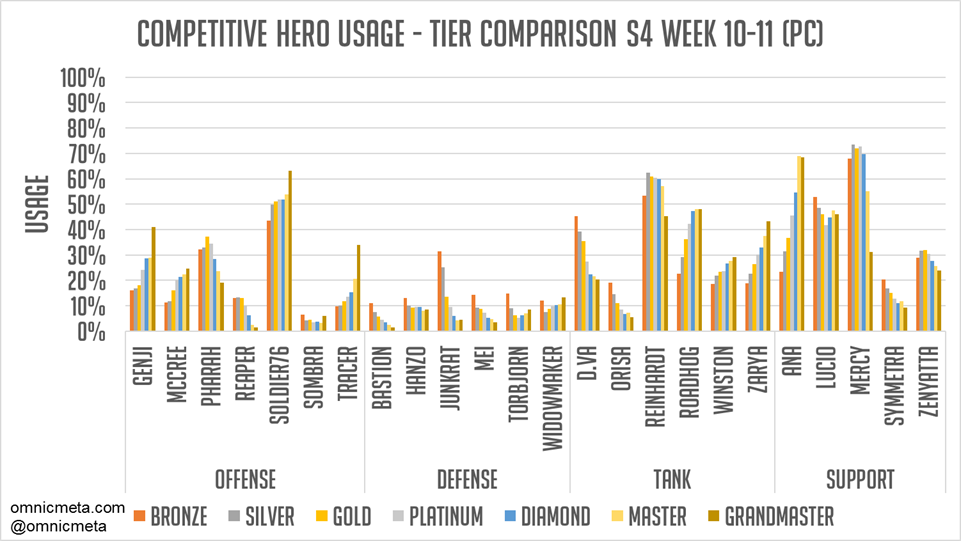 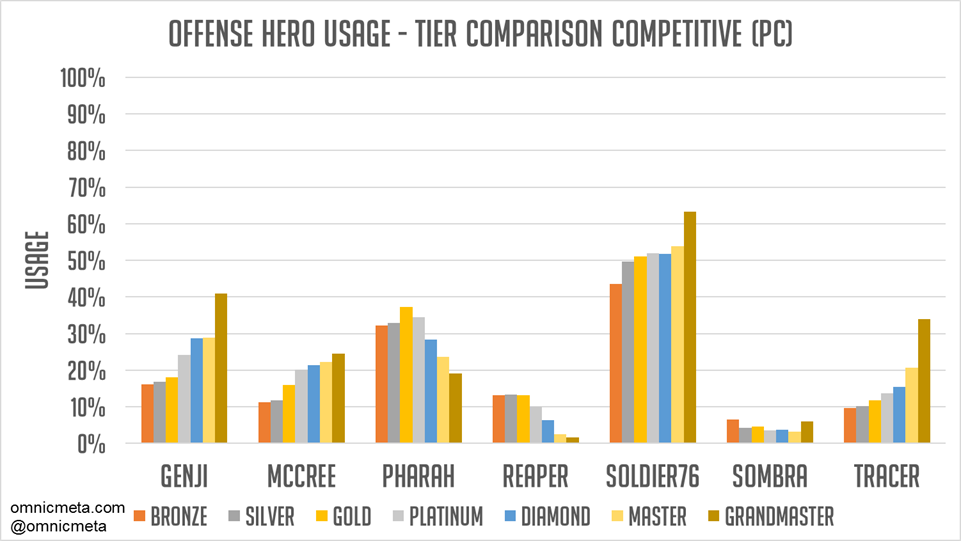 Offense heroes usage appears to be mostly stabilized since the last report two weeks ago. Soldier: 76 continues to be the most popular hero across all tiers in Season 4.  While a 5% damage nerf looks like it will hit live servers soon, the general expectation seems to be that his usage won't dip much if at all.  He continues to be the only offensive hero with a full kit of utility: self-healing, mobility (sprint),  ranged damage, and burst damage (helix rockets).  The biggest continuing trend - for the past month Genji has been growing in popularity while Pharah has been falling.  Team compositions have shifted to dive, and it seems that Genji has been the big winner. Particularly at the higher tiers, Genji, Tracer, and Winston seem to be core to the team composition.  Despite Mercy's incredibly popularity, Pharah continues to lose popularity at the higher tiers.  It's unclear exactly why this is, but it simply may be a case where there aren't enough DPS team composition slots to go around.  In other words, why choose Pharah when there may be better options?  McCree's usage has somewhat waned this report, by 1% to 2% across the tiers.  With Pharah being less popular and Soldier growing in usage, what we are likely seeing that double hitscan is less popular.  Reaper and Sombra continue to be unpopular in the current meta. 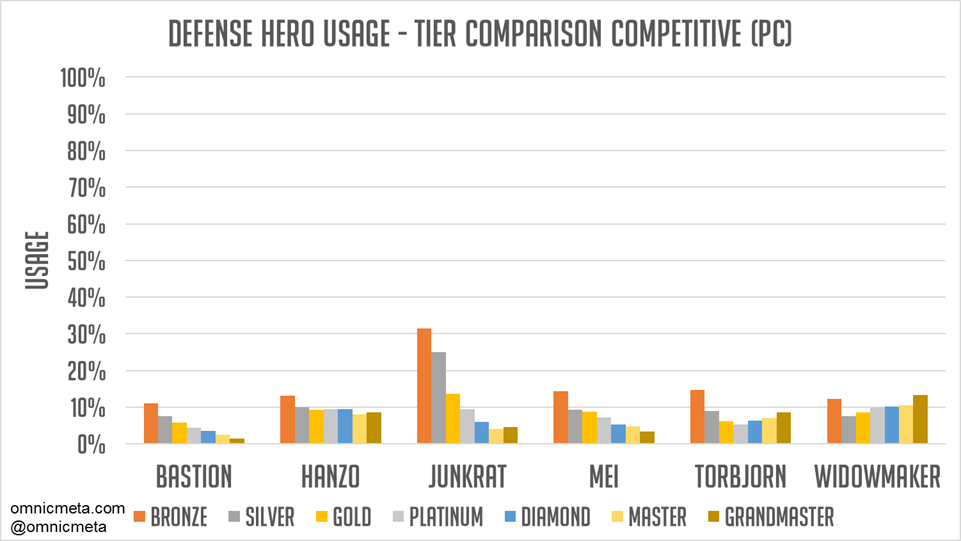 The Defensive category contains some of the most niche and situational heroes.  The continuing trend for the category is that Bronze tier continue to appreciate the heroes at a much higher rate than other tiers.  In particular, Junkrat continues to be an incredibly popular hero at Bronze and Silver (#7 and #10 most popular respectively).  The remaining defensive heroes (Bastion, Hanzo, Mei, Torbjorn, and Widowmaker) remain uncommonly seen across all tiers.  With the 10% arrow charge speed and climbing buff coming soon to Hanzo, it will be interesting to see if his usage will increase, particularly at higher tiers.  Effective increases to DPS has historically improved the fates of other heroes (e.g. Soldier), and Hanzo already has a potential for high game impact with headshot, sonic, and scatter arrows.  Time will tell if the buffs help negate his glaring weaknesses. 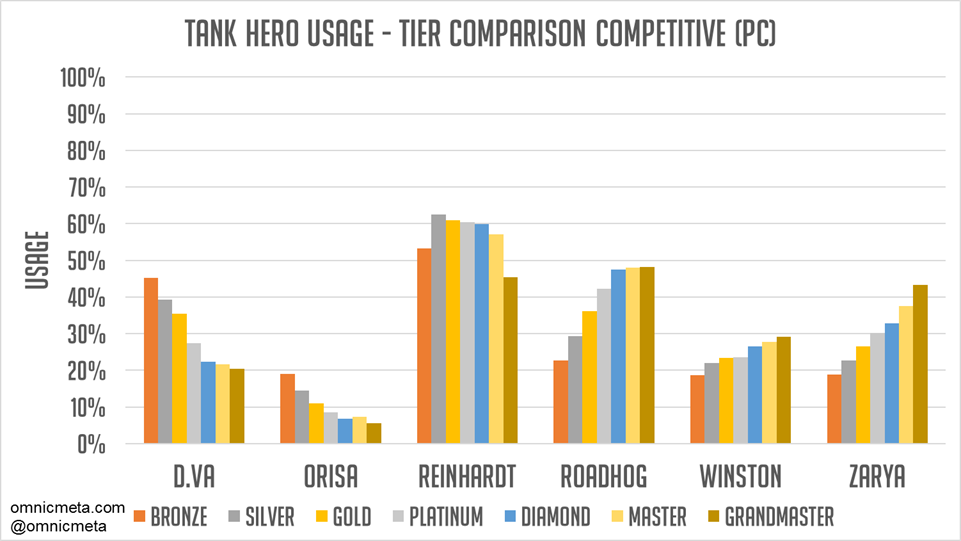 Major shakeups in Tank usage continue this report.  Reinhardt remains the most popular tank overall, but this week has been eclipsed by Roadhog for the #1 spot at Grandmaster.  He remains the only real anchor tank on the roster, but Orisa's huge PTR buff for her shield cooldown (from 12 seconds to 8 seconds) may give Reinhardt more competition for that slot.  Orisa's popularity otherwise has stagnated as the least popular tank overall, and is mostly a niche hero at this point in the meta.  The biggest mover for the last month has been D.Va, who gains an average of 3% usage across the tiers this week. D.Va's biggest strengths (her defense matrix and mobility) are being used in a number of team compositions in the professional scene.  Winston's rise in popularity has slowed for the first time in months, and now has saturated at around 30% usage at high tiers.  He remains a key fixture in dive team compositions.  Throughout most of Season 4, Zarya and Roadhog competed for the #2 tank spot across most of the tiers, but as Zarya has decreased in popularity Roadhog has become the clear #2.  Roadhog's one-shot potential and ability to deal with Winston make him particularly useful in the meta, while Zarya's ult and projected barrier is still powerful, and especially so with Genji and Tracer. 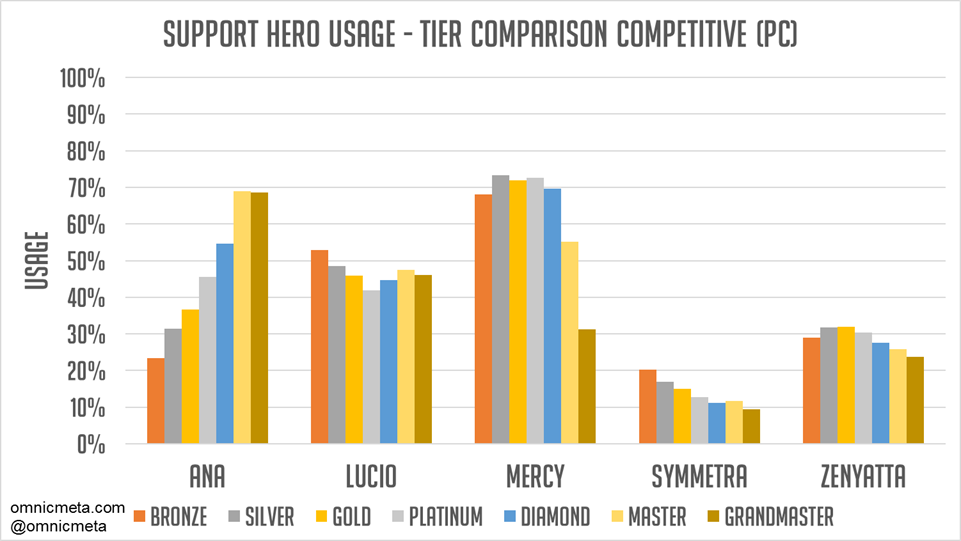 The biggest news this report is the shakeups in Support popularity.  For the first time in Season 4, Lucio is the biggest loser of popularity across all categories.  He has lost an an average of 3% across all tiers this report, a somewhat shocking result given his prior popularity and near 100% usage rate in the pro scene.  The recent rework of Lucio's kit significantly increased his skill ceiling and raised the skill floor, and it is unclear if his drop in popularity in the last two week will be a continuing trend.  Mercy continues to be the story this season, rises from near obscurity at high tiers to become on of the most popular heroes in the game.  At 70% usage at most tiers, she appears to be an auto-pick in each match.  Many players online continue to debate whether Mercy is too strong, with many of these conversations centered around her resurrect ultimate.  Ana's popularity continues to wane at Master and Grandmaster tiers, but as appears to have stabilized otherwise.  Zenyatta is a bright spot for Grandmaster tier, as he jump 5% in usage from the last report.  With tank heavy and dive team compositions continuing to be popular, his discord orb continues to prove its use.  Symmetra remains a situational niche pick and the least popular support hero in Overwatch. 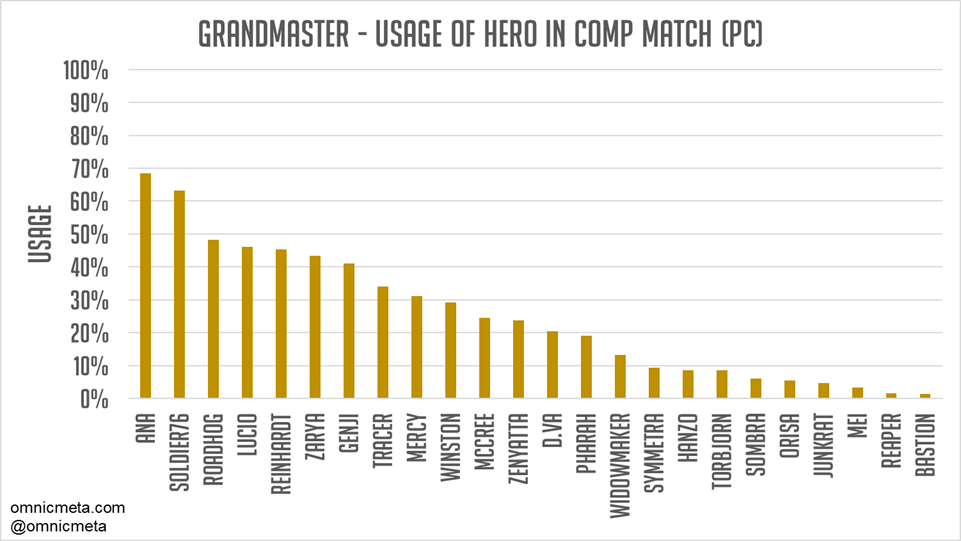 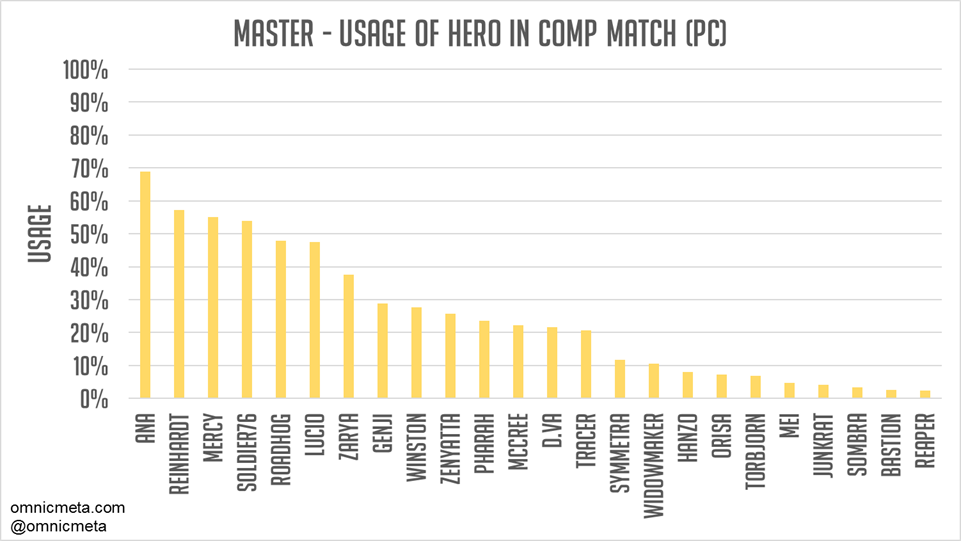 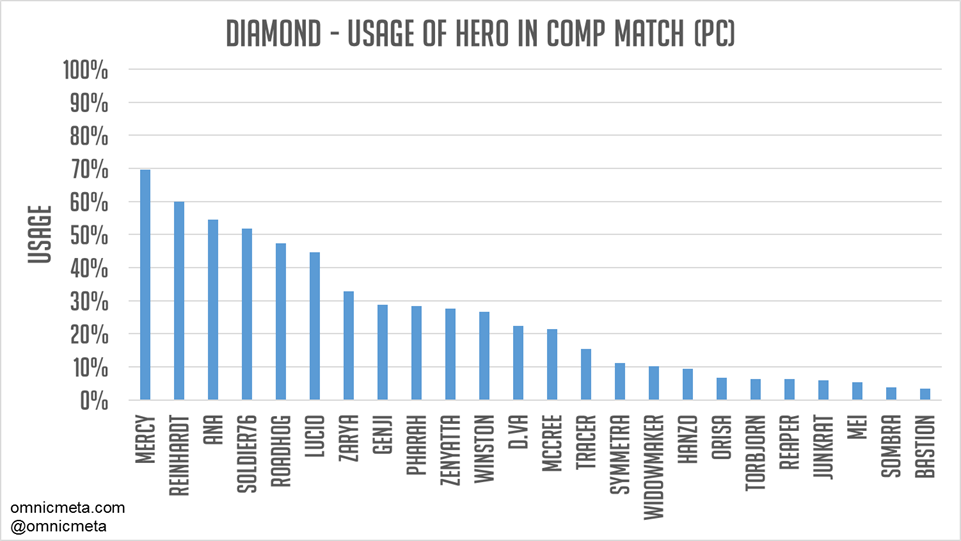 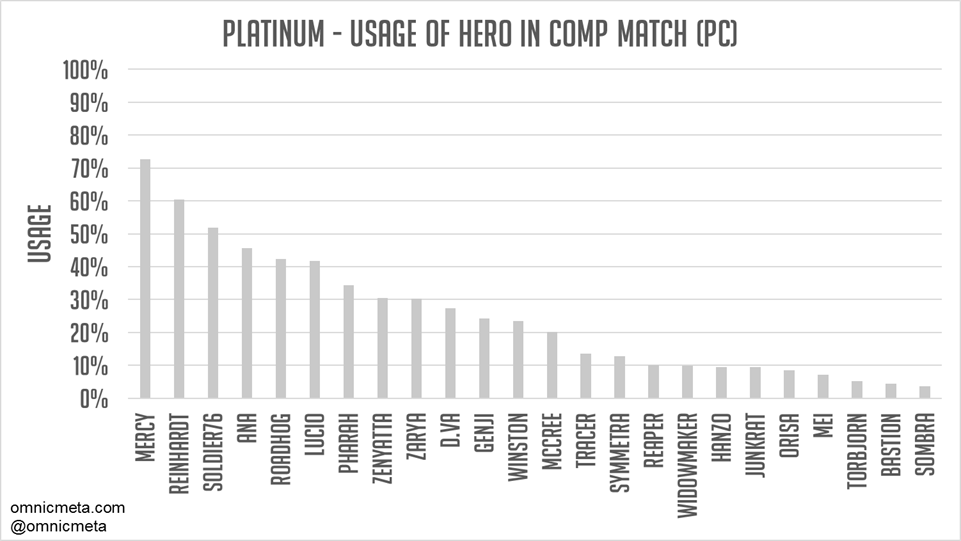 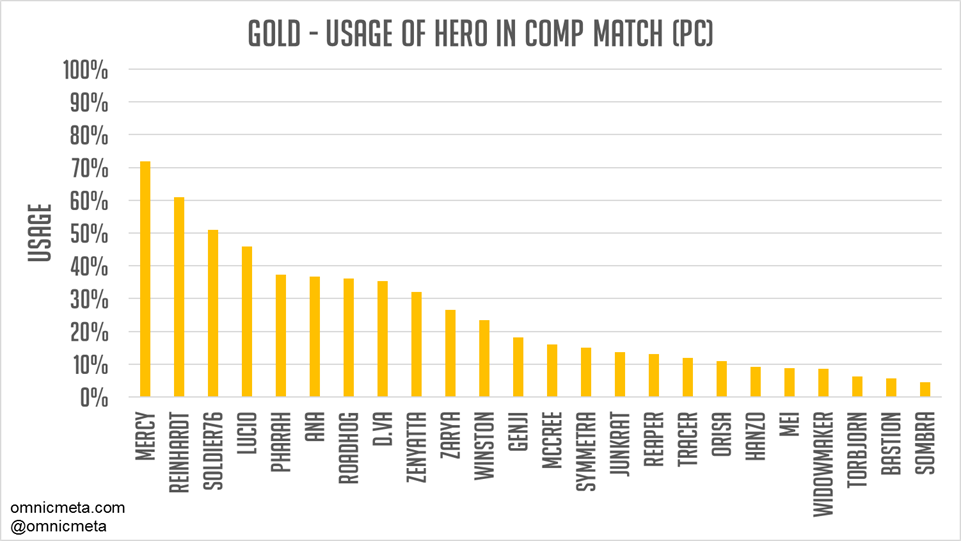 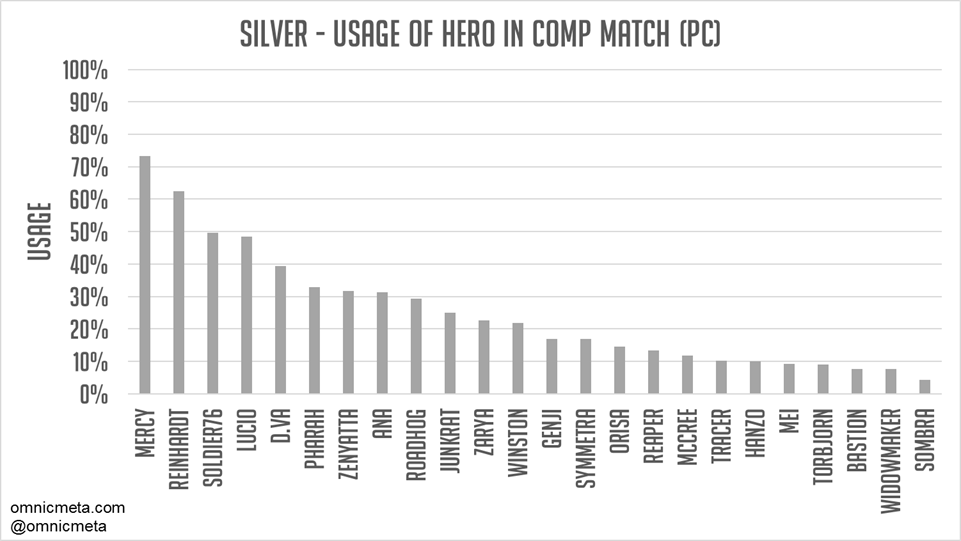 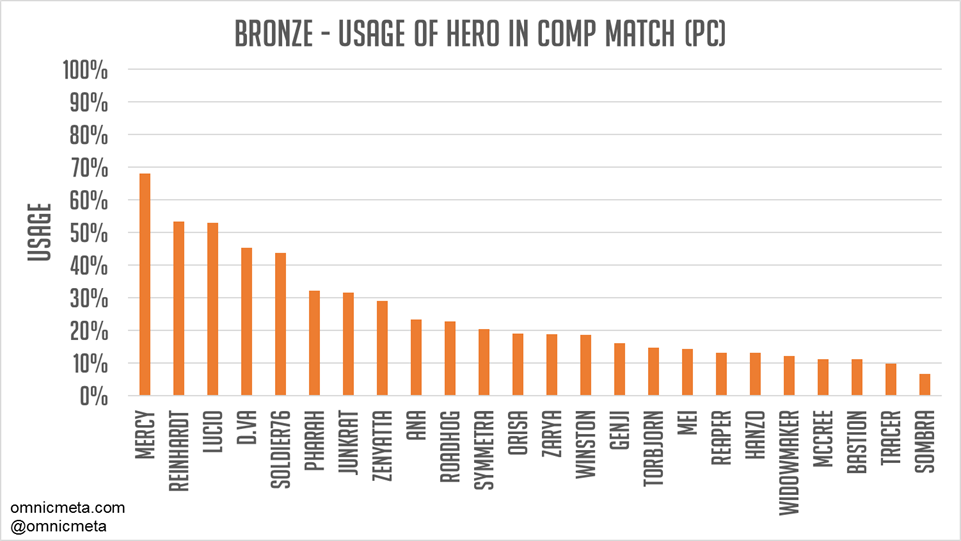