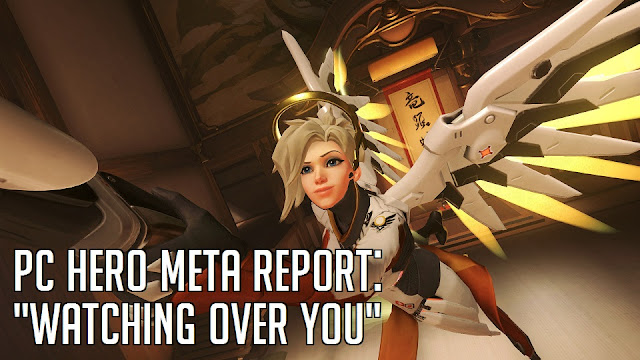 In competitive Overwatch, we have never seen a hero with a near 100% pick rate across every tier - until now.  Patch 1.15 was a big patch for Mercy - giving a huge boost to her Resurrect ability and pushing her to a consensus must-pick in the current meta.  Support and Tank play have changed the most in the past two weeks, as D.Va's major changes also have shifted her role a bit as a tank, and staples Reinhardt/Roadhog coming back into the meta.  As always I hope you enjoy this report!  - Switch 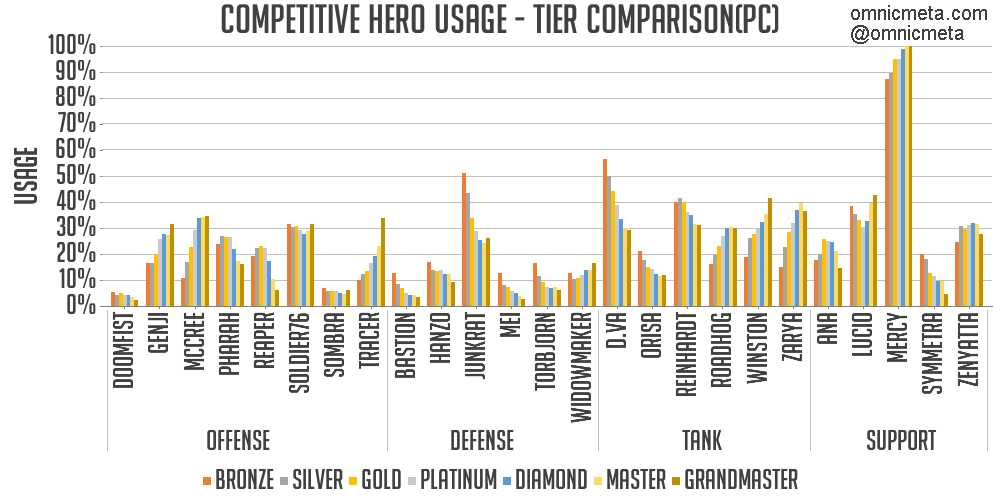 Mercy's popularity has completely exploded after her massive rework in Patch 1.15.  She is seeing nearly 100% play at all tiers, and the community at large seems to believe she is one of the strongest heroes in the game - at least partly stemming from the great strength of the new resurrect.  Her massive jump in play has impact all the other support heroes' popularity - most support players are playing Mercy these days in some capacity.  Surprisingly, Ana's usage has fallen the most out of the other three healing supports (Ana, Lucio, Zen).  And to think only a few months ago it was Ana with the near 100% usage rate.  Blizzard is already looking into nerfing Resurrect and with good reason - currently Mercy is the only main healer than anyone seems to want to play.

Patch 1.15 also impacted D.Va - and many players were wondering if it would be a net nerf or buff.  Her popularity has steadily grown in the lower tiers (as the most popular tank), and it appears that she is now taking more of an off-tank role, with the nerf to Defense Matrix reducing her abilitiy to tank damage, and the new Micro Missiles ability increasing her DPS and burst damage output.  Many players seems to be happy with the new D.Va - it will be interesting to see how she establishes herself in the current meta.

Tanks in general continue to be strong heroes, as all tanks with the exception of Orisa remain very popular.  Reinhardt and Roadhog, two heroes that were out of the meta in Season 5, have slowly found their way back as important pieces of the competitive meta with some of the highest winrates in the game.  This continued increase in popularity is likely due to Patch 1.13 changes which fixed some game-breaking Reinhardt bugs, and Patch 1.14 which gave a massive buff to Roadhog in the form on much better self-healing. Winston on the other hand, is seeing his popularity wane as a direct result.  Once the darling of the higher tanks (especially Grandmaster), he is finding increased competition since dive team compositions fell out of favor - mostly from Reinhardt, Roadhog, and Zarya.

For DPS heroes, the only major trend is the shift towards McCree - particularly at the higher tiers.  McCree seems to be slowly taking over in DPS roles (from Tracer/ Genji/Soldier), perhaps to deal with the new Mercy most effectively through high burst damage.  However, no Overwatch hero meta report would be complete without mentioning the Australian with a penchant for explosives - Junkrat.  Junkrat maintains his popularity as one of the top DPS heroes in the game today.  He has even gained significant usage in Bronze and Silver, where he sits as the most popular DPS hero by far.  With the big buffs in Patch 1.14, Junkrat continues to have a huge impact and sit at the top for winrates out of all the meta heroes.  All in all, Junkrat's rise to the top of the meta makes for one of the biggest hero meta stories for Season 6.

Two of the biggest gainers are the beneficiaries of Patch 1.15 buffs.  Mercy is up first - resurrect as a regular ability and the new Valkyrie ultimate are seen as incredibly strong by the Overwatch community.  So much so, that she is being played nearly 100% of the time at all tiers of competitive play.  Practically, this jump means that Mercy is seen absolutely huge gains at all tiers - including +30%, +42%, and +52% at the highest tiers.  Tank play has changed quite a bit since the last report, as D.Va is seeing increased popularity at the lower tiers, while Reinhardt and Roadhog are more popular at the higher tiers.

With Mercy seeing so much more play, it is only logical that other supports would fall in popularity - and that is exactly what happend.  Ana, Lucio, and Zenyatta are all down significantly to make room for the queen of Overwatch.  The biggest shock?  Ana has lost nearly all her remaining popularity in at Master and Grandmaster - something that would have been unfathomable just a Season ago.  Winston is worth a special mention, as he falls -7% on average across all the tiers, and -18% in Grandmaster.  He is seeing increased competition from main tanks and off tanks alike. 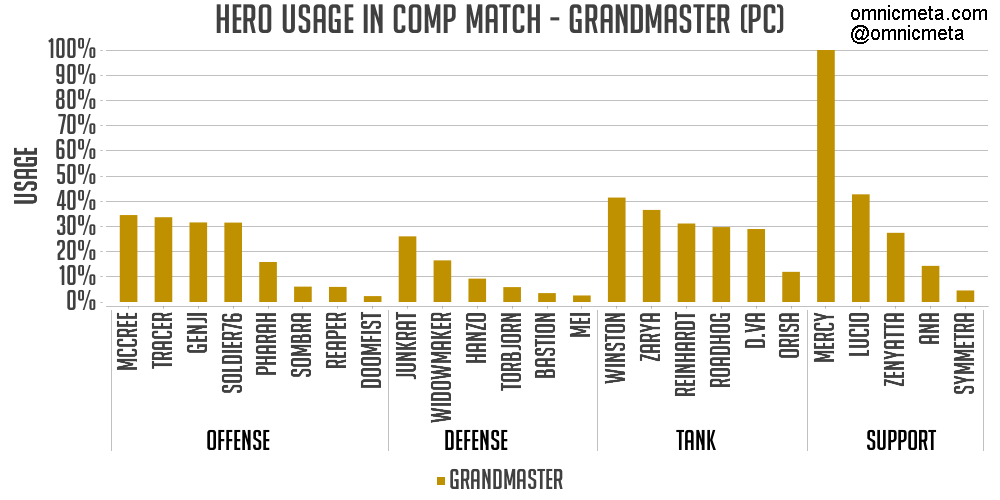 Tank:  Winston (-18%) remains in freefall as a continuing trend, but is still seeing more play than any other tank.  Both Roadhog (+10%) and Reinhardt (+7%) are seeing a big bump in popularity, while D.Va (-4%) continues her decline after her rework.  All tanks are very popular except for Orisa. 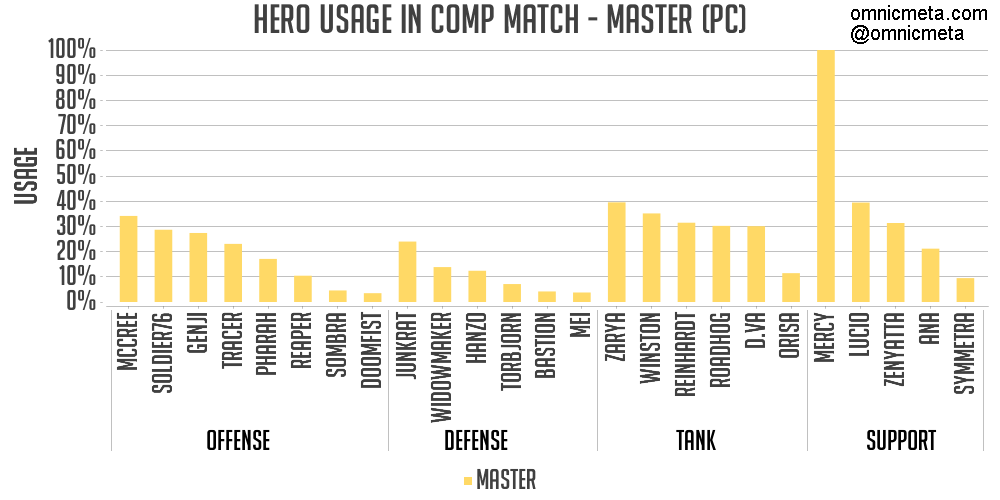 Offense/Defense:  McCree (+3%) is starting to pull away as the top DPS in Master, as both Soldier and Genji (-4%) have fallen in popularity.  Junkrat (+2%) is still seeing more play time than Tracer.

Support:  Mercy has completely taken over with a +42% increase in popularity.  As a result, Ana (-22%) has completely fallen off as a main healer, while Lucio (-10%) and Zenyatta (-6%) are down and being played as off-support. 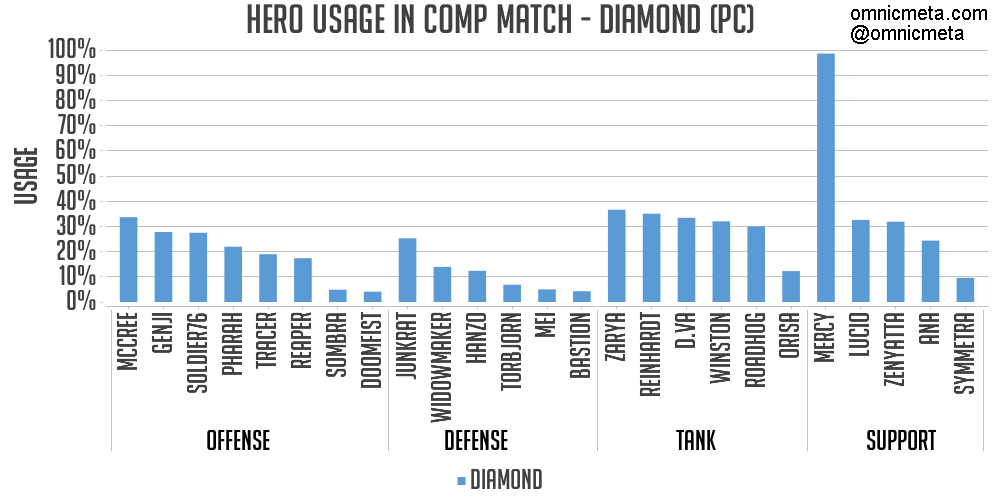 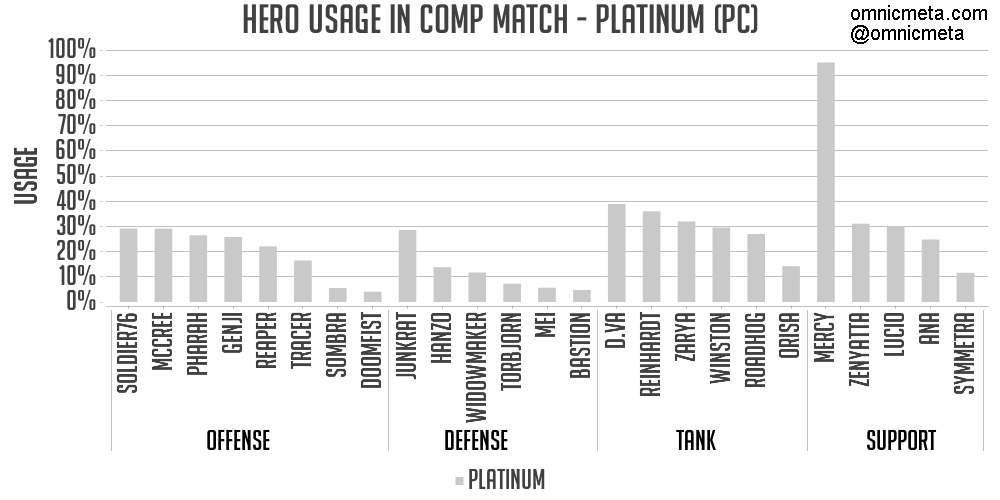 Tank:  D.Va maintains her position as #1 tank in Platinum, while Reinhardt (+2%) and Winston (-4%) exchange places. 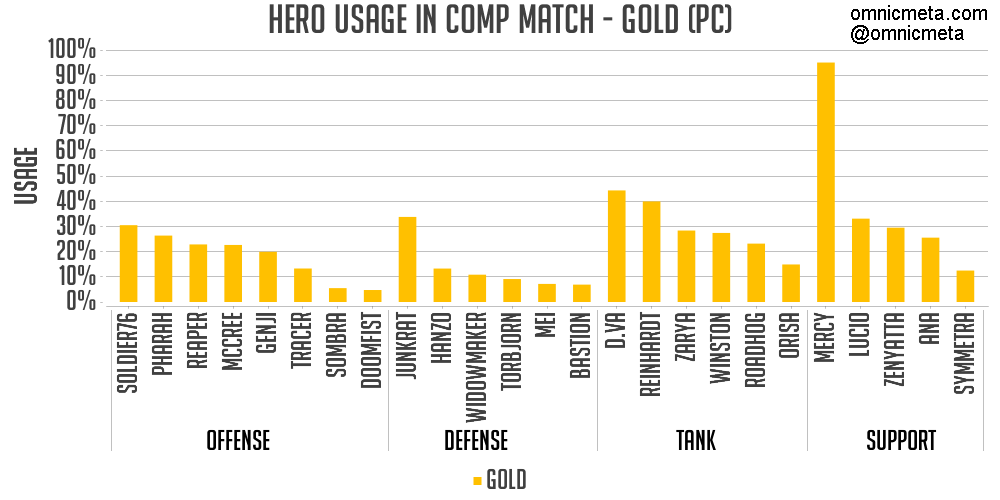 Offense/Defense:  Junkrat (-2%) maintains his popularity as the #1 DPS, while Soldier, Pharah, Reaper (-2%), and McCree (+2%) are seeing significant play.

Tank:  D.Va (+5%) and Reinhardt are the two picks that are being heavily played currently.  Zarya is still seeing quite a bit of play, while Winston (-5%) falls behind to the #4 tank for the first time in months. Offense/Defense:  Play remains mostly unchanged.  However, Junkrat (+3%) is pulling away from Soldier as the favorite DPS in Silver - and is now at 43% usage.

Tank:  D.Va (+6%) gains after her Patch 1.15 changes - putting her and Reinhardt as the two popular tanks in the current meta.  Winston is the only other tank with above 25% usage. 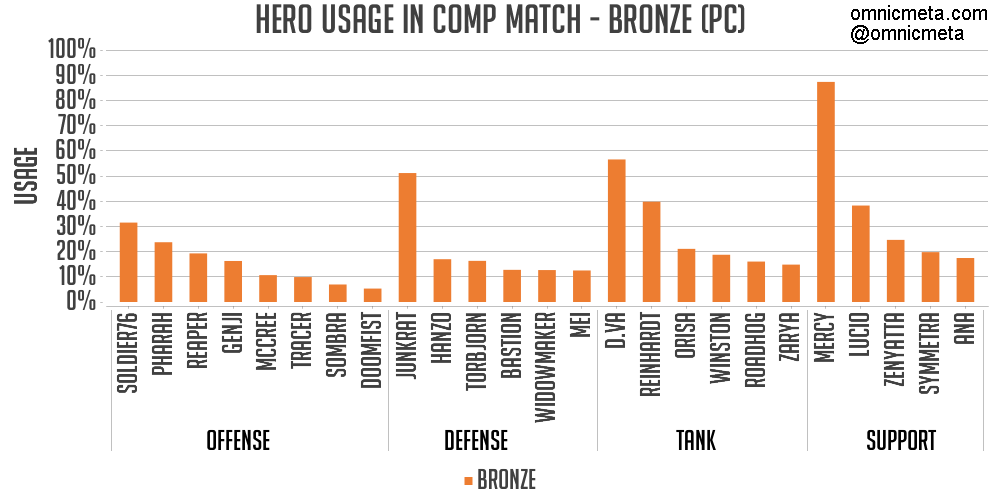 Offense/Defense:  Junkrat's big +4% bump in popularity has him the clear favorite DPS and the 3rd most popular hero overall in Bronze.  Soldier (+3%) and Pharah (-4%) are the only other two DPS heroes seeing significant play.

Support:  Mercy (+15%) is the big story - despite seeing the least play in Bronze of all the tiers, she still sits at 87% usage.  Lucio (-11%) and Zenyatta (-6%) are still seeing significant play, but clearly have given ground to super-popular Mercy.