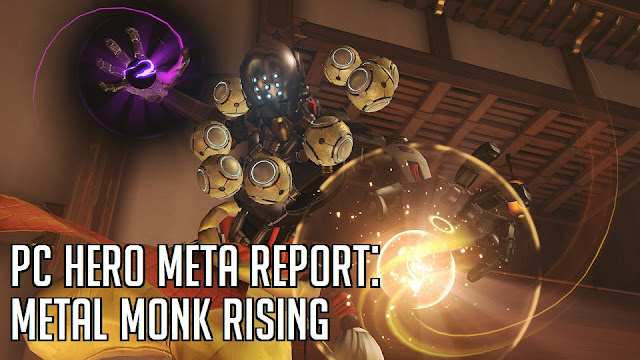 Season 7 has started!  While Patch 1.17 has not been released yet, there still are some shifts in the meta at the beginning of the season.  Reinhardt and Roadhog continue to creep up in popularity, while former popular hero Winston is seeing a big decline.  While Mercy remains a must-pick, Zenyatta has come into his own, seeing significant growth at every tier of play.  As always I hope you enjoy this report!

The above infographic presents the top two heroes gaining the most usage since the last report.  The big headliner this time is Zenyatta, who sees a rise of +7% play across the tiers.  He is finding more play at the higher tiers, and has become a hero of choice to pair with Mercy.  The next big gainer is Reinhardt, continuing to return to form and up 4% across the tiers.  With the meta moving away from mobile team compositions and back into more control-style, Reinhardt and other shield-heavy tanks such as Orisa are seeing more play.  An honorable mention this report is Roadhog, who continues to regain his footing in the meta follow the self-healing buffs (movement and damage reduction) from Patch 1.14.

With Zenyatta on the rise,  other support heroes are likely to have fallen in popularity.  Lucio is down greatly at high tiers: -15% at Grandmaster and -10% at Master.  While Lucio is still being played, it seems as though players at high tiers are valuing Harmony/Discord and Transcendence over Speed Boost and Sound Barrier.  At lower tiers, that losing support hero is Ana, who continues to fall across the tiers (down 3% usage on average across all tiers).  Ana is simply waiting for her damage buff in Patch 1.17 to reach live servers, which coupled with the Mercy Resurrect nerfs will hopefully improve her chance to impact the meta. We also see Winston generally falling across the tiers (down more than 2% on average).  There is increased competition among tanks for play time, and players are starting to choose Reinhardt more often than Winston. 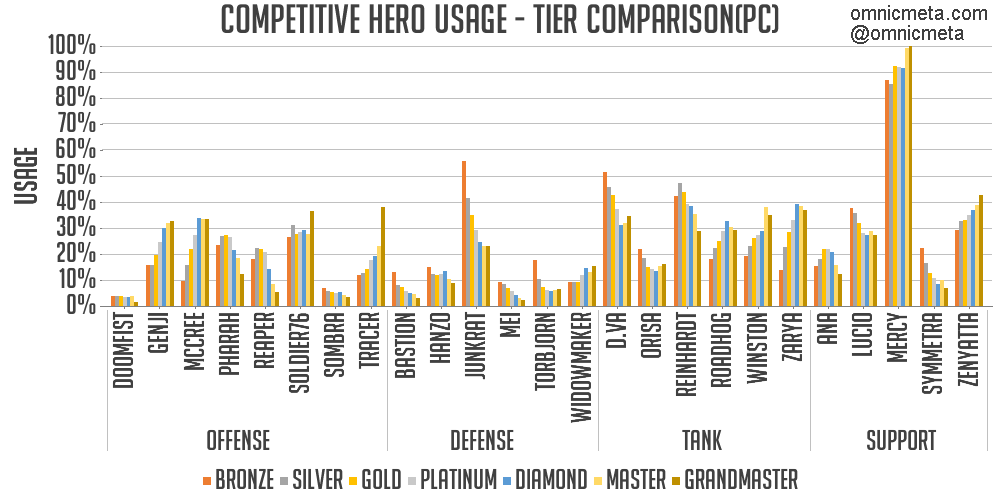 The hero meta at the start of Season 7 can be described quite simply: diverse at DPS and Tank (where many different heroes are viable), with a Mercy for healing.

This report's biggest winner is Zenyatta who has seen his fortune's rise as Mercy has surged in popularity.  Generally speaking, keeping ally Mercy alive while trying to speed the demise of the enemy Mercy appears to be the name of the game.  Zen's harmony and discord orbs continue to be a strength of his kit, enabling ally flankers to be kept alive, while enabling quicker time to kill on pesky enemies (including enemy #1, Mercy).  Transcendence is also one of the best defensive ultimates in the game, further strengthening Zenyatta's credentials as the off-healer to pair with Mercy.  With Zenyatta's popularity increase, Lucio has fallen in play but is still popular.  His kit is skill quite good (Sound Barrier remains quite strong), but he can't offer anything extra to help support or kill Mercy.  Finally, poor Ana continues to fall in popularity as is just waiting for her PTR Patch 1.17 damage buff to hit live servers.  Whether the buff (and Mercy nerf) is enough to bring her back into the meta remains to be seen, but many players are hoping that she becomes viable again.

Season 6 darling Junkrat is still one of the most popular DPS heroes, all stemming from his buffs several months back.  Double Concussive Mine and a much more agile Rip-tire have elevated him to a popular pick - and have enabled some of the highest winrates in the game.  Many players have aired their grievances about "OP Junkrat", but so far Blizzard has not indicated any meaningful changes will be made.  So, with no nerfs or changes on the immediate horizon, it seems quite likely that Junkrat will remain a top pick throughout Season 7.

Speaking of Junkrat, the Top 3 DPS heroes at Bronze -> Gold tiers are Junkrat, Soldier, and Pharah - who also happen to have some of the highest winrates at those tiers.  Junkrat has been popular since his buffs, while Soldier (all-around hero) and Pharah (paired with ever-present Mercy) have consistently been popular choices for many seasons now.  Splash damage and more forgiving DPS are incredibly important for those tiers.  For Platinum -> Grandmaster, McCree and Genji shove their way into the Top 3, accompanying Soldier.  At Grandmaster tier, Tracer is still a top pick.  The heroes offer high burst damage and the ability to get kills - from that perspective, these are high skill ceiling heroes most suitable for higher level play.

Tank play continues to its slow evolution, becoming very diverse - most of the heroes are being heavily played regardless of tier.  Reinhardt has slowly surged back, seeing usage gains since the end of Season 6.  He is now being played at above 30% usage at all tiers, meaning the German crusader is in 1 in 2 teams to 1 in 3 teams, depending on the tier. Roadhog is continuing a similar comeback, as Blizzard gave him a literal lifeline in Patch 1.14 with buffs to Take a Breather.  While his popularity is still a far cry from 50%+ usage it used to be, Roadhog is being played at 30% usage at higher tiers, and his winrates have returned to respectable rates.  Other tanks such as D.Va and Zarya remain very popular, offering kits that can counter enemies and complement allies (Defense Matrix/Boosters and Graviton Surge) Finally, Winston's popularity continues to dip as competition for Tank playtime has increased.  He still remains quite popular at Master and Grandmaster tiers, and if dive becomes popular again, expect to see Winston rise back up through the ranks of other tiers as well. 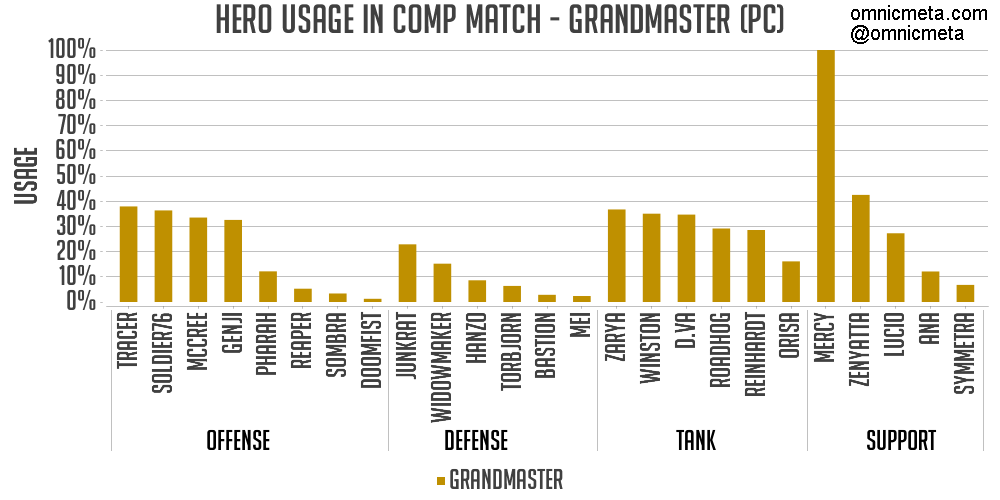 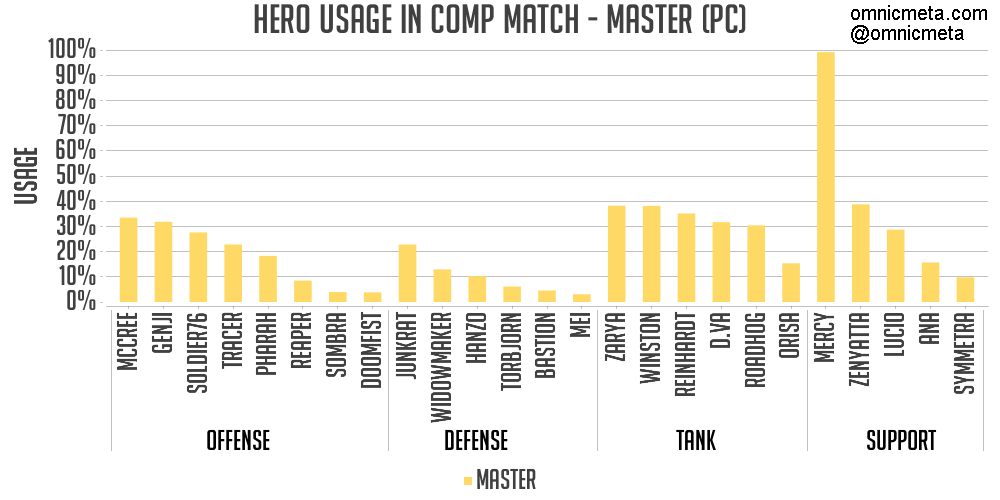 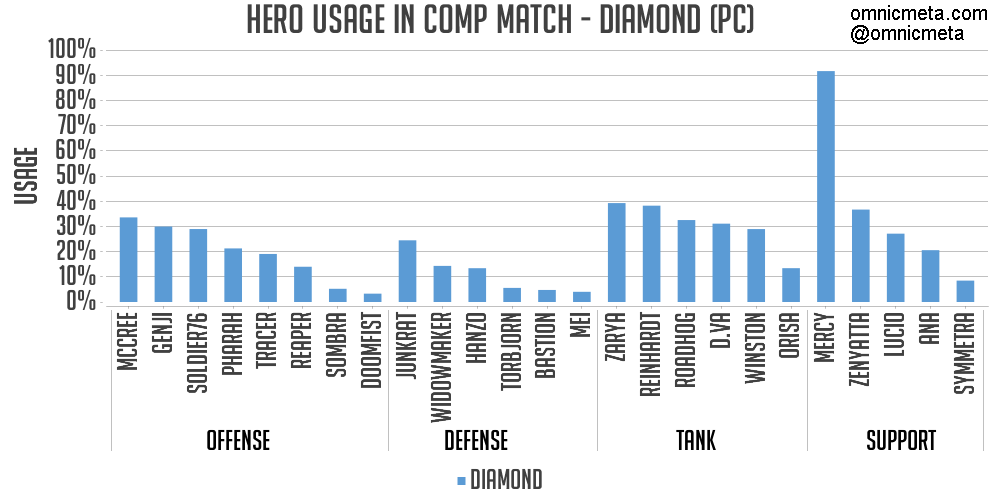 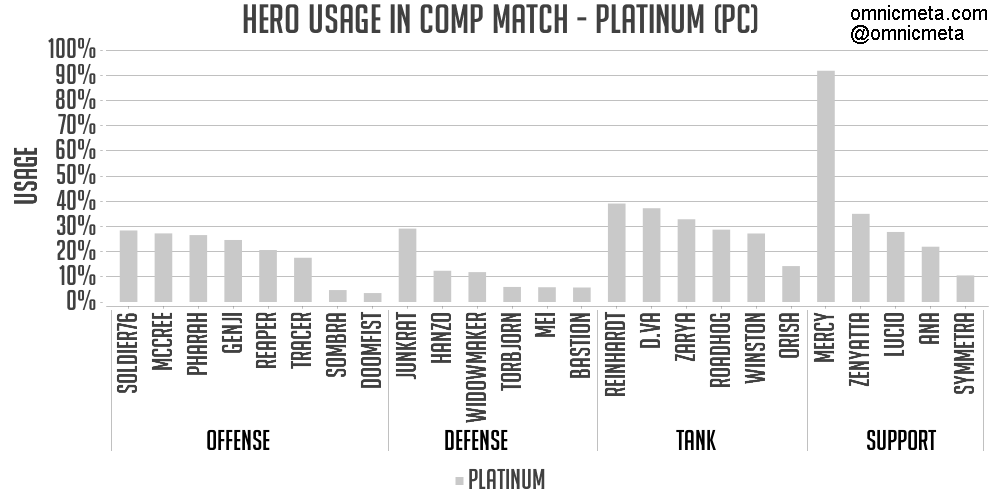 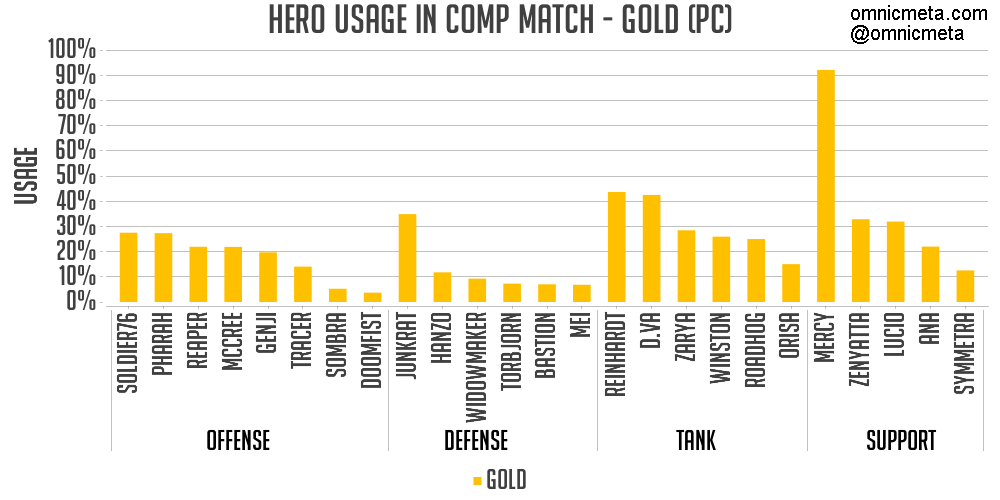 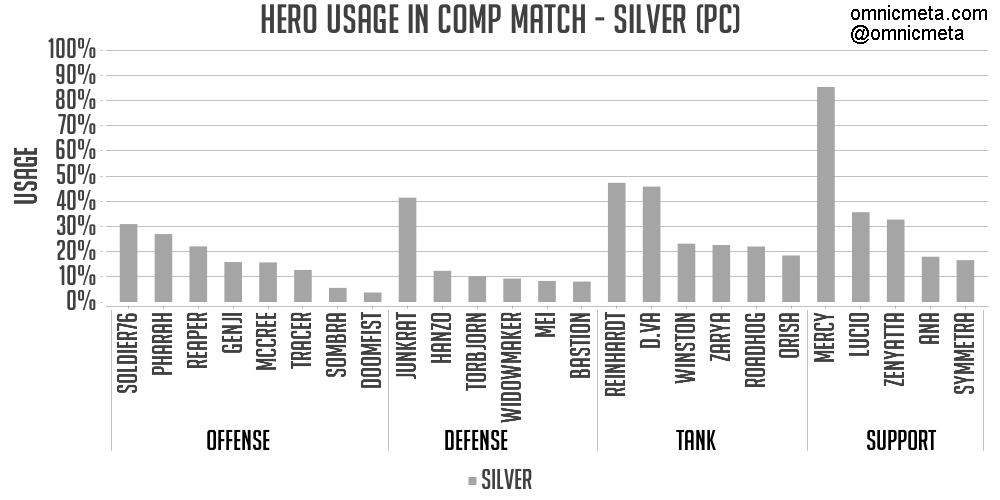 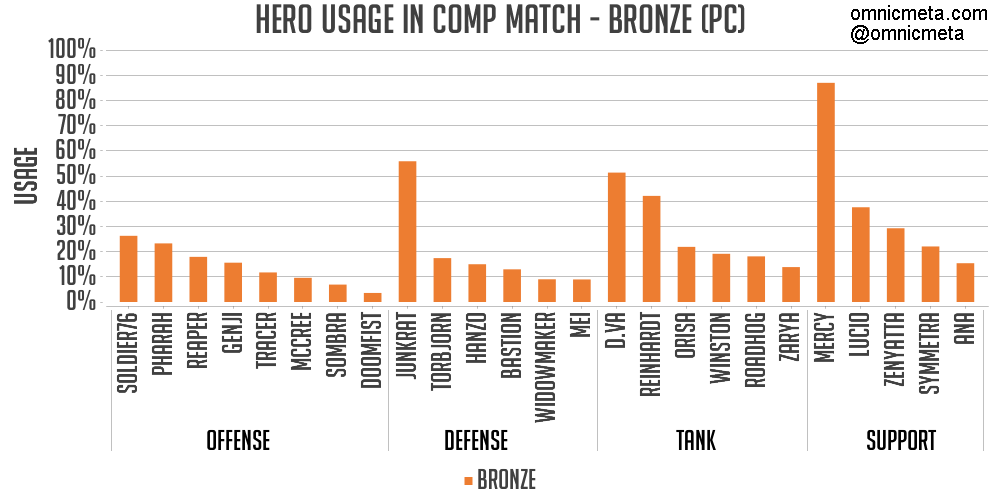