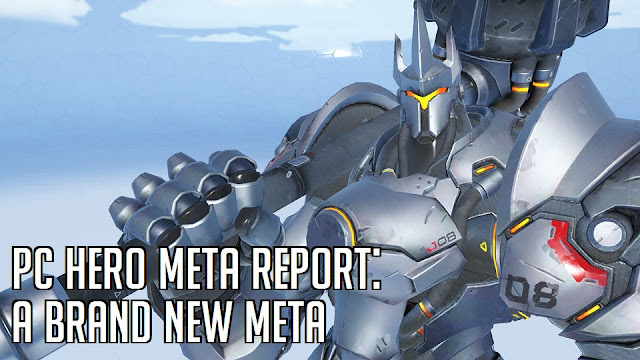 Season 10 is well on its way, with new hero Brigitte and reworked hero Hanzo leading the charge!  Well, it's probably more accurate to say that newfound tank meta hero Reinhardt is the one leading the charge.  In any case, we have a brand new meta - with DPS and Tank play completely changing from last season!  If you haven't done your placements yet, there's a lot to take in as only main healers Mercy and Moira are the true carryover from last season.   As always I hope you enjoy this report!

Check out these other recent articles!

The above infographic presents the top two heroes gaining the most usage since the last report.  Brigitte is excluded as she is new for Season 10.  As you might expect, the meta has completely changed in Season 10 - putting Reinhardt back on the map.  Reinhardt coming back into the meta signals the death of dive (at least for now) as he has surged at the highest tiers displacing the other tanks along the way (+30% average).  Hanzo's rework has also caused his popularity to pop - and make him the top DPS in game currently (+29%).  His new Storm Arrow and Lunge abilities have enabled him to have incredibly high damage output, melting both Tanks and squishy heroes.  Honorable mentions this report are Zarya (+24%), Mercy (+16%), and Pharah (+6%) - all heroes that an becoming an important part of the current meta.

The death of dive is even more evident when looking at the biggest losers at the highest tiers: Both D.Va's (and Winston's usage has plummeted at the highest tiers (around -30% in Diamond through Grandmaster).  Both tanks were the cornerstone pieces of dive team compositions.  Along with those two heroes, Moira and Zen have lost popularity at the lower tiers.  This change is mostly due to Mercy being the most popular main healer, along with increased competition from new hero Brigitte.  Honorable mentions are Tracer (-13% average), Lucio (-11% average), and Genji (-9% average). 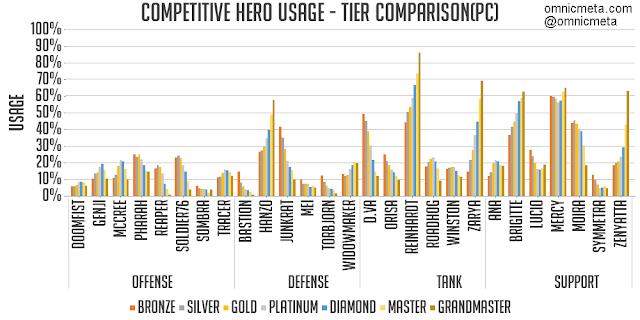 The above chart breaks down average hero usage by tier, grouped by category (Offense, Defense, Tank, Support).  Despite the big shifts in the meta, there is still significant diversity in each category.  Hero popularity continues to differ depending on tiers - but there are some important trend to notice: Support play has changed from the introduction to Brigitte, Tank play has flipped away from dive heroes, and DPS has polarized to Hanzo and Junkrat. If you look closely, the Grandmaster/Master meta is very pronounced right now - Hanzo on DPS, Reinhardt/Zarya as tank, and Brigitte/Mercy/Zenyatta as support. 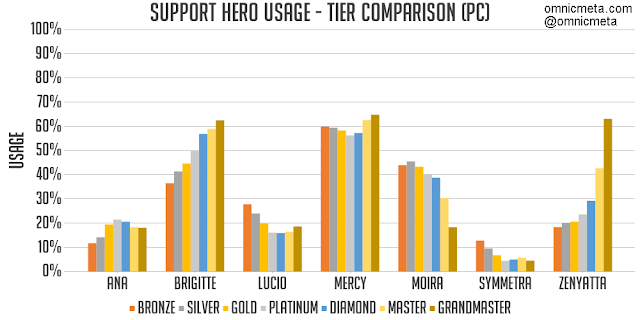 The support meta sees big changes as Brigitte finally reaches competitive.  She's made a huge splash on the meta in general, though her initial high pickrates has settled down somewhat - She's on your team in roughly half of all games across the tiers now.  While her low healing output make her more of an off-support, her armor continues to be very valuable, synergizing especially well with shield-based heroes such Zarya and Zenyatta.  One thing to note is that Brigitte has the highest winrates across all tiers of play (for meta heroes) at 56% on average.  She remains an incredibly strong hero on ladder.  Mercy and Moira generally splitting times as the main healer in today's games, with Mercy's damage boost being the biggest factor for choosing her over Moira.  Damage boosting Hanzo and Junkrat is especially powerful to shred enemy shields and heroes.  The final support piece in today's meta is Zenyatta, who is more often used at the higher tiers as a third support to pair with Brigitte - with his Harmony orb enabling Brigitte to play aggressively, discording helping remove targets, and Transcendence used to counter enemy Graviton Surge and Dragonstrike combos. 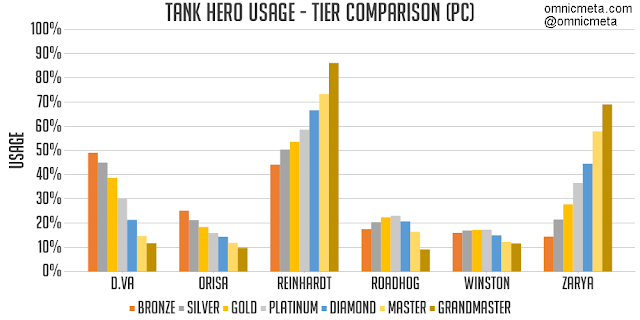 The tank meta has completely flipped with the start of the season, mainly due to Brigitte and Hanzo.  Gone are the two staples of dive: Winston (<20% usage at all tiers) and D.Va (played mostly at lower tiers).  Their mobility and high health is currently being countered by the stuns and burst damage in the game.  Instead, Reinhardt has re-taken his place as the #1 tank in the game right now.  His shield remains strong and Rein has great synergy with Brigitte - a stun onto the enemy Rein can drop their shields and open up a perfect opportunity for Earthshatter.  Reinhardt also has the top winrates out of all tanks for each tier - toppling previous #1 D.Va.  Zarya has also come into the the meta as the 2nd most popular tank for three main reasons.  First, spam damage (such as Hanzo and Junkrat) and shielding aggressive melee heroes Rein and Brigitte keeps her energy up, enabling  her to output lots of damage and build her ultimate.  Second, her ultimate Graviton Surgecombos incredibly well with Hanzo's Dragon strike, enabling frequent team kills.  Third, Zarya's shield health stacks on top of armor provided by Brigitte - giving her a healable buffer from incoming burst damage.  Finally, D.Va is still seeing considerable play in lower tiers.  She is still a great all around tank, with good damage, mobility, and the ability to provide protection for her team.  However, a word of caution for the lower tier players to watch out for spam heroes and Zarya on the enemy team - they can make quick work of your mech. 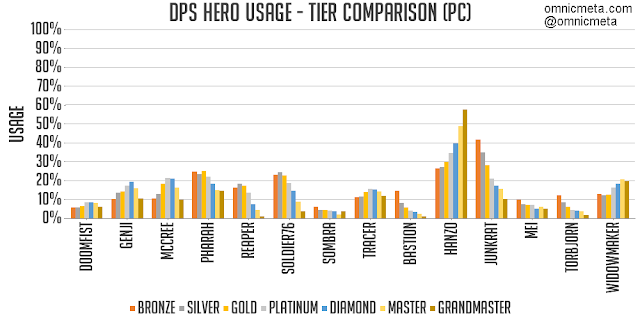 Looking at the DPS heroes, we can see quite a few changes in this new meta.  The biggest changes is that most heroes are being played at 10%-20% usage, with fairly flat popular across the tiers.  This pattern is a big shift from the Tracer/Genji meta's of previous seasons, where we saw huge spikes in heroes depending on the tier.  That said, the meta right now revolves primarily around two heroes: Hanzo and Junkrat.  Hanzo needs little introduction, as his buffs have given him one of the highest damage outputs in the game.  His mobility coupled with the ability to one shot heroes (some requiring Mercy damage boost) and melt tanks make him a force to be reckoned with right now.  Hanzo's winrate also puts him #1 among other DPS heroes - with above 50% in most tiers.  The other main DPS meta hero is Junkrat, who remains very popular at the lower tiers (despite some nerfs).  His popularity on ladder is for similar reasons to Hanzo - a high burst damage hero that can deal with enemy barriers (Rein) and armor that Brigitte provides. 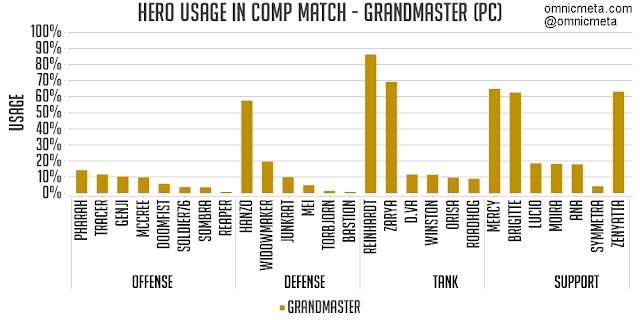 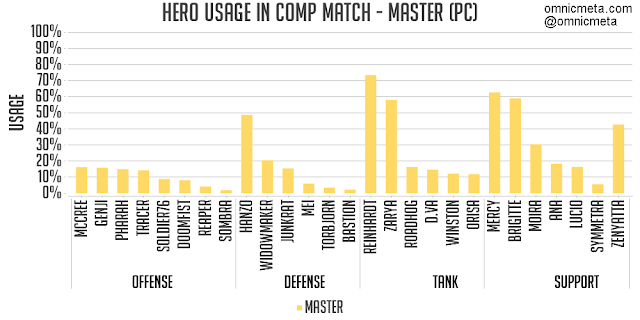 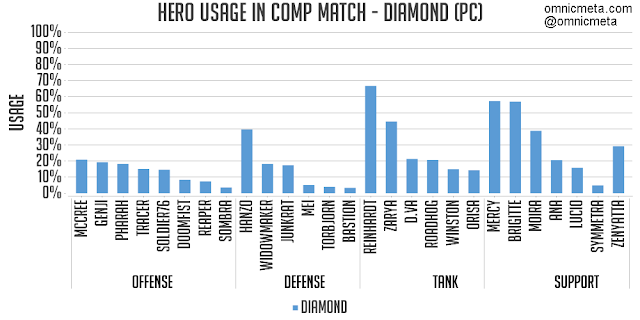 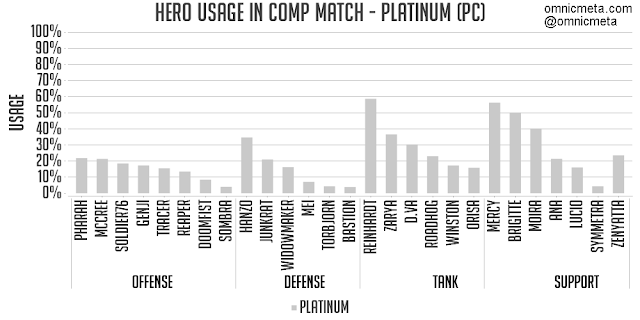 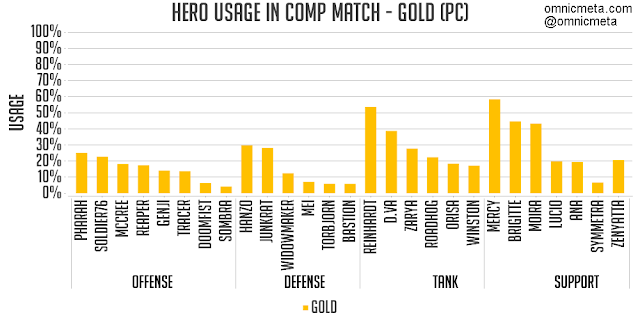 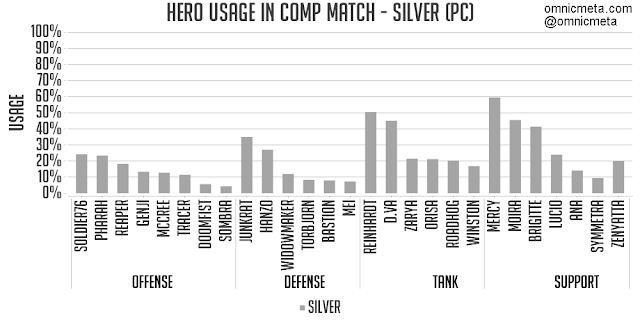 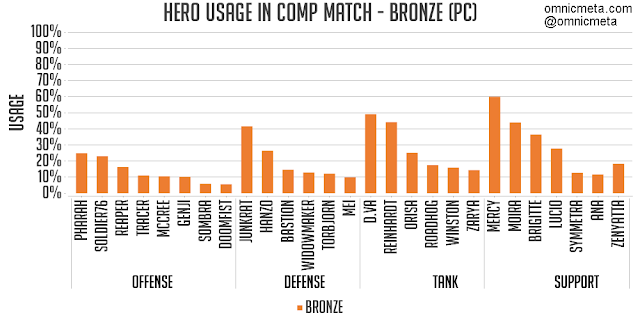