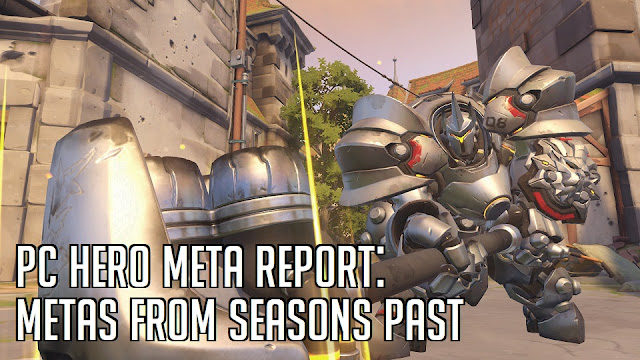 Season 9 is well underway, with some buffed heroes (Sombra) and old mainstays (Reinhardt) seeing more play.  In general, meta heroes from several seasons ago are coming back into the meta, but the biggest change this season has been in the Support category.  Many Overwatch fans will not be surprised to hear that Mercy has come firmly back into the hero meta on competitive ladder - as Moira has declined.  As always I hope you enjoy this report!

The above infographic presents the top two heroes gaining the most usage since the last report. As mentioned at the start of the article, Mercy has come back into the meta quite a bit (#1 support at lower tiers) as the Moira craze has cooled off.  She is up +10% on average across the tiers - and other supports like Ana (+4%) and Lucio (+5%) have also gained across the board (Zen's popularity has grown +8% at the high tiers).  Former Tank mainstays Reinhardt (+5%) and Zarya (+4%) have also grown in popularity in Season 9 as the Tank meta continues to shift. Honorable mentions this report are Offensive heroes Sombra (+4%) and Genji (+2%).

The biggest shift in Season 9 has been with Moira - she is down -23% on average across the tiers.  She is still quite popular with around 40% usage at most tiers, but is no longer the #1 most popular support.  Her role continues to change more to off-support as well as players stats to choose Mercy and Ana more.  With Rein and other tanks becoming more popular, Orisa has fallen -8% and D.Va -4% across all tiers of play.  D.Va remains the top tank at the moment, even as Reinhardt become more popular.  Finally, Junkrat continues his slow decline in Season 9 as he drops 4% usage across the tiers.  The Concussion Mine nerf has made his ability to confirm kills more inconsistent. 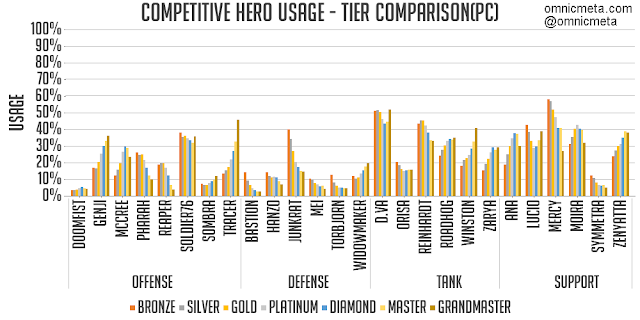 The above chart breaks down average hero usage by tier, grouped by category (Offense, Defense, Tank, Support).  In general there continues to be a lot of hero diversity at each role, with each tier having their favorite heroes.  The heroes currently in the meta reflect a variety of different team compositions, including tri/quad-tank, deathball, dive, and more standard 2/2/2 control compositions.  This is a continuing shift away from dive - and the heroes that are most prominent in them. 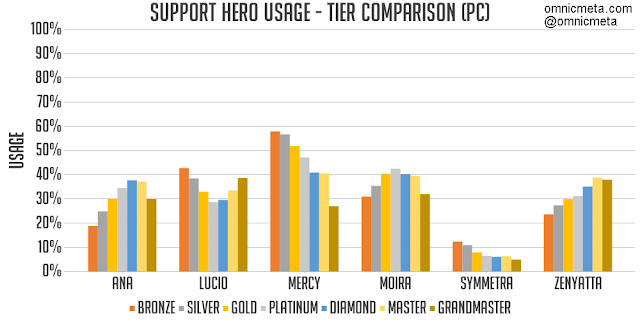 The support meta sees a shift as players move away from Moira and back towards Mercy, Ana, Lucio, and Zenyatta. Mercy regains quite a bit of her popularity, and remains the healer with the most consistent single-target healing output, while being mobile (Guardian Angel) and hard to kill.  She is most popular at the lowest tiers, with other healers such as Ana and Zenyatta seeing more play at the higher tiers.  Moira remains very highly played across all tiers despite a significant drop.  Looking at the usage, it seems likely that Moira is playing more of an off-support lately - as Mercy/Lucio/Ana see more play.  Most of the meta supports have some of the highest winrates in the game at the moment (Lucio, Mercy, Moira, Zenyatta) - leaving Ana still below the bar. 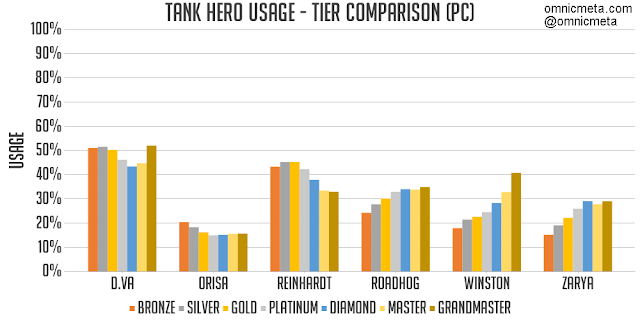 The Tank meta continues to revolve around D.Va as the most popular tank with some of the best winrates among Overwatch heroes.  D.Va continues to arguably be one of the most powerful heroes in the game - highly mobile, high burst damage, high health, and ability to eat projectiles and enemy ultimates with her Defense Matrix.  For main tanks, Orisa, Reinhardt, and Winston serve as the main tanks with Winston being slightly more preferred in higher ranks (and Reinhardt less) due to a greater presence of dive team compositions.  One trend has been Reinhardt taking more and more of the main tank role away from Orisa and Winston.  For offtanks not named D.va, both Roadhog and Zarya are both firmly in the meta - though Zarya is much more commonly found at the higher tiers. 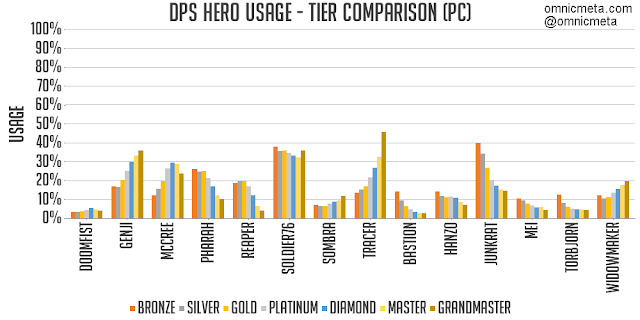 Similar to Support and Tank categories, there are a number of viable DPS heroes in the current meta.  Soldier is the only hero being consistently played across all tiers as the all-around DPS hero that can seemingly do it all - similar to D.Va in the Tank category.  McCree is seeing more play at the higher tiers, where dive heroes Genji and Tracer are also popular.  Other high skill-ceiling heroes (Widowmaker) continue be popular at the highest tiers.  After spending much of his time in the meta of Season 8, Junkrat has slowed declined in popularity such that he is now only popular in the lower tiers.  His winrates and damage output remain high, but the nerf to his Concussive mine makes confirming kills much more difficult - and him less OP and useful overall.  Rounding out the popular lower tier DPS heroes, Pharah and Reaper continue to be popular as they can be more difficult to counter at those tiers. 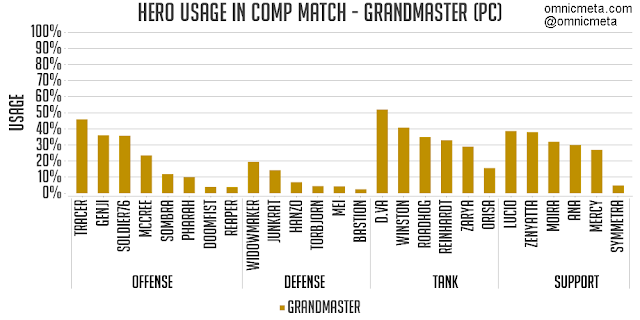 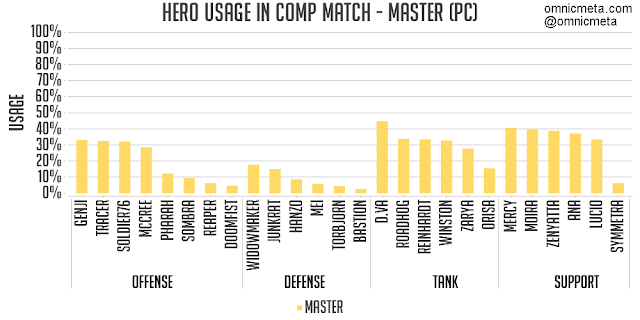 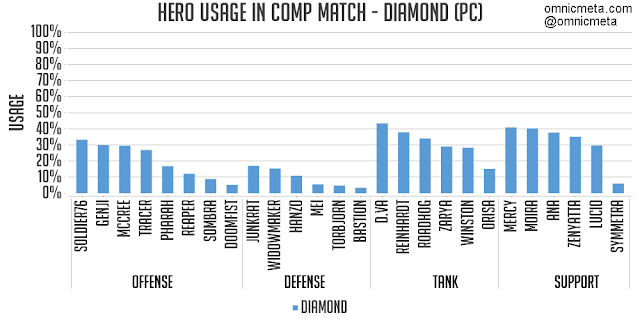 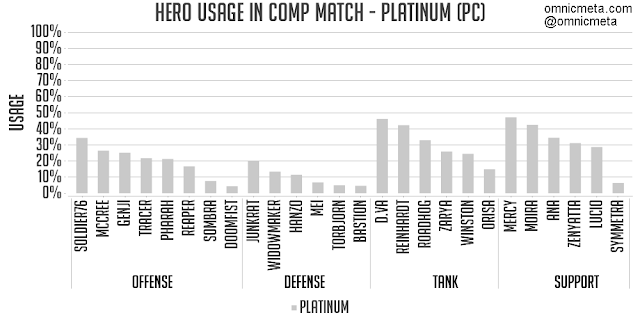 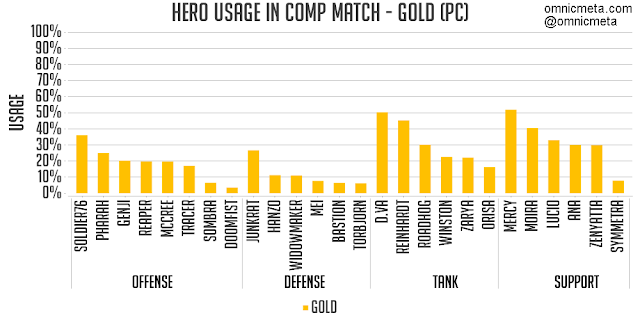 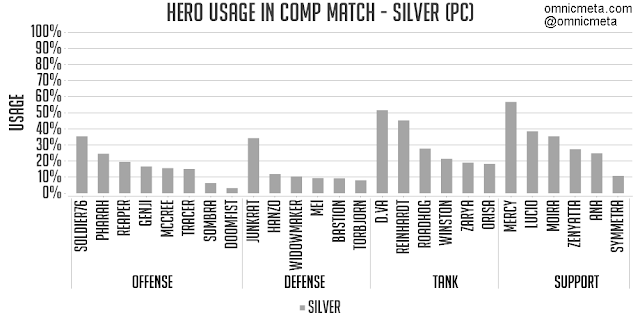 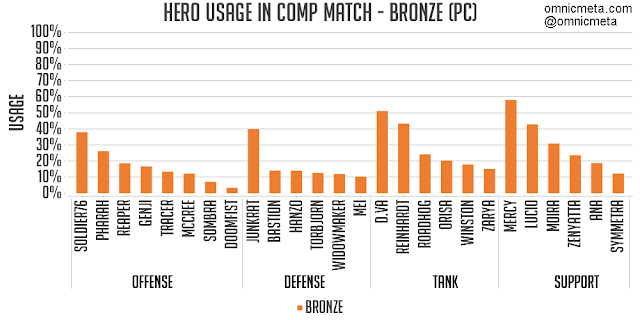