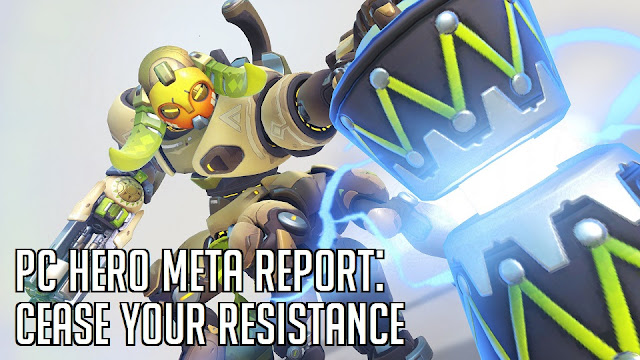 Welcome to Season 8!  This season has already produced some pretty big changes to the hero meta on PC, namely the acceptance of Moira as a first-rate support hero, D.Va and Roadhog cementing themselves as top-notch tanks, and the introduction of previously no-tier hero Orisa into the meta. With Overwatch league just getting started and Mercy and Junkrat nerfs on the way, the meta in Season 8 will no doubt continue to change as players figure out the best heroes and team compositions.  As always I hope you enjoy this report!
- Switch

The above infographic presents the top two heroes gaining the most usage since the last report.  Supports have seen the biggest change by far, with tanks also seeing a shift.  Mercy has surged back at the higher tiers as is up +13% on average across all tiers of play.  Players have again decided that she is a near must-pick in each match due to Resurrect and Valkyrie and have been choosing her again over other supports.  Moira (+8% Bronze-Gold) and Zenyatta (+13 Diamond-Grandmaster) remain highly-picked heroes in the current meta and has seen a significant uptick in play depending on the tier. For tanks, Orisa has finally come out hiding and into the meta, up more than 9% on average and up 11% in the tiers Diamond through Grandmaster.  Orisa's shield is incredibly strong, providing the highest amount of damage blocked in the game currently - and much higher than Reinhardt.  Honorable mentions are D.Va (+6%) and Roadhog (+4%).

With Mercy, Moira and Zen rising, Ana and Lucio have collapsed. Sadly, Ana is down -9% usage on average across the tiers and -14% usage in Diamond through Grandmaster and has fallen back to her pre-buff usage.  Players seem to have realized that the buff did not increase her viability and have gone back to Mercy or are now playing Moira.  Lucio has faded too, mostly due to speed boost having less perceived utility - now that Moira and Zen being played as the off support to Mercy.  Lucio continues to fall to his lowest usage since the game's release.  Zarya has fallen -7% usage on average across all tiers has become one of the least popular tanks currently.  Despite coming back into the meta in Season 7, Reinhardt has fallen -8% usage in the high tiers as Orisa is starting to be gain real traction as a main tank in Season 8. 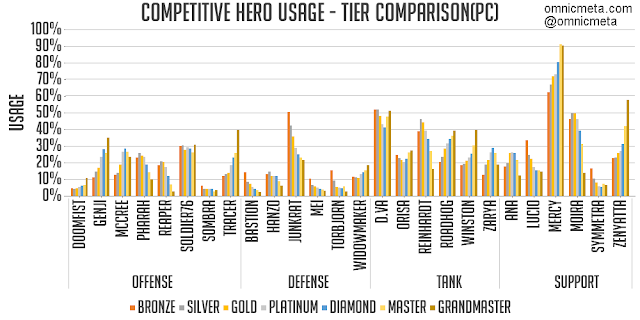 The meta shifts in Season 8 have mostly been focused around support and tank play.  In general, we see a big rise in D.Va, Roadhog, and Orisa play.  While statistics have long supported Orisa as a formidable main tank, the meta never really supported having static shields with a high uptime.  Now, with the massive amount of spam and damage (and of course the popularity of "Pirate ship"  team compositions for payload maps), there are more opportunities to use her.  Perhaps even more surprising: every single single tier is averaging nearly two supports per game.  The popularity of Mercy, the introduction of Moira, and the power of Zen's discord are certainly the biggest reasons for that welcome trend.

Mercy continues to be the healing force to be reckoned as she reclaims he status as the most popular hero in Overwatch.  Her entire kit is incredibly strong - and determined by Blizzard to still be overpowered as Blizzard has scheduled the 3rd nerf since her kit rework.  That's right, even after multiple nerfs, Blizzard and a large portion of the casual and professional Overwatch community is still not happy with her.  However, with a big nerf on the way, we may finally see Mercy fall out of the meta, if only at the higher tiers.  Her usage increase in Season 8 are partly due to player's realization that Ana's damage buff did not make her more viable, greatly reducing her competition as a main healer.  Ana has fallen below 20% usage in most tiers. Also notice that Lucio is rarely played and below 20% usage in most tiers as well.  Speed boost appears to be much less useful compared to both Moira orbs and Zenyatta discord.   The most common support composition found at all tiers is Mercy / Zen, with Moira either replacing Mercy as the main healer (lower tiers) or competing with Zenyatta for off healer at all tiers.  Moira is on your team in roughly 1 out of 2 matches in tiers Bronze - Diamond, while Zenyatta is preferred highly in Master and Grandmaster tiers.

The Tank meta is shifting quickly, as Orisa finally makes her way into the meta.  Players are recognizing how strong her renewable shield and abilities really are, especially in the spam meta that features heroes like Junkrat.  Orisa is quite effective in competitive right now, sporting some of the best winrates among all heroes - and #1 in Master and Grandmaster.  While she doesn't exactly fit into every scenario (Attack on assault maps for example), players are continuing to find new ways to use her.  Note that Reinhardt is still quite popular at lower tiers, though not as much at higher tiers, where Orisa and Winston also compete for the main tank role.  For off-tanks, D.Va and Roadhog have grown in popularity while Zarya has quickly dwindled.  D.Va continues to be the most popular tank in the game, with her kit (Defense Matrix, Boosters, Micro Missles) being useful in many situations.  Roadhog has grown in popularity as the spam and shield meta has grown - being able to dish out high DPS to shred shields while having great survivability is a great asset.  We're seeing some well defined tank compositions this season, including Orisa / Roadhog pairings - in addition to the protection from Orisa's nearly constant shield uptime, both heroes offer high sustain with 50% damage reduction abilities.

DPS hero play in Season 8 remains similar to Season 7.  Generally speaking, Soldier and Junkrat remain among the most popular heroes - with Junkrat continuing to have some of the highest winrates in the game.  With a Concussion Mine nerf on the way which increases the skill floor, we may see Junkrat's status in the meta shift in the near future.  At the high tiers, players also continue to prefer heroes with high skill ceilings - like McCree, Genji, and Tracer.  In the right hands, those heroes can take over games and carry.  At low tiers, heroes that can self-sustain or are hard to deal with are popular such as Reaper and Pharah (especially hard to deal with when paired with Mercy).  Also of note is that hero that can help deal with a Valkyrie Mercy (Widowmaker, McCree, etc) continue to have value in the current meta - although at the high tiers due to the mechanical demands of the heroes.  One surprise this season has been the uptick in Doomfist play, particularly at the highest tiers (+5% usage at Grandmaster).  While he still is not played much, players are seeing him on the ladder more often nonetheless.  With quite a few of his many bugs finally fixed, we may see more of him in the future. 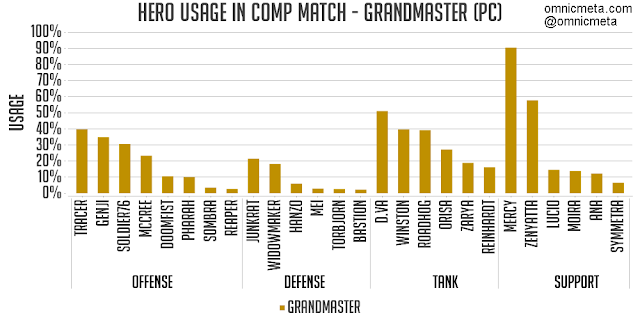 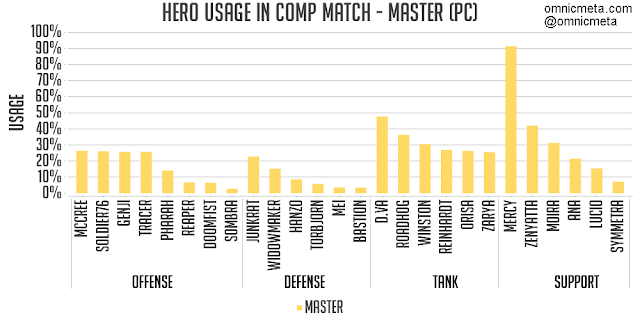 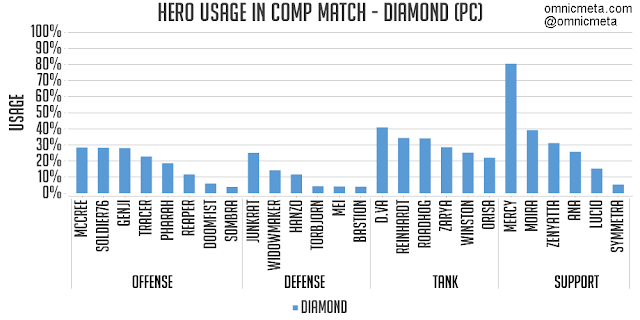 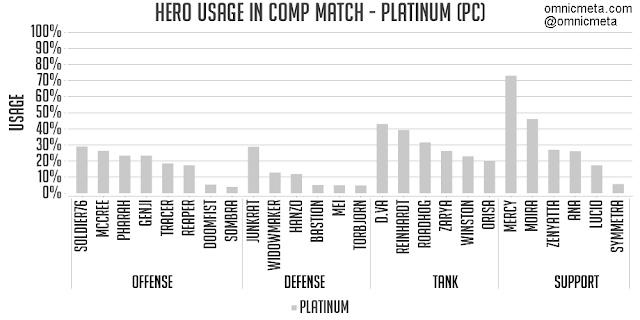 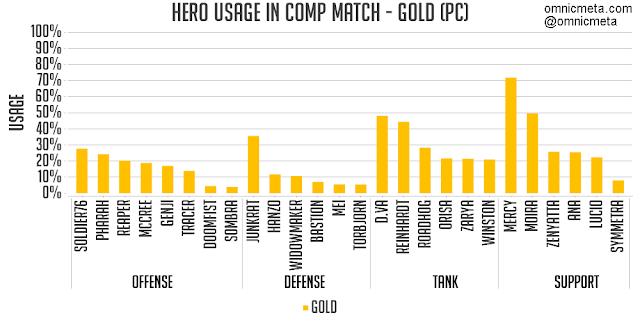 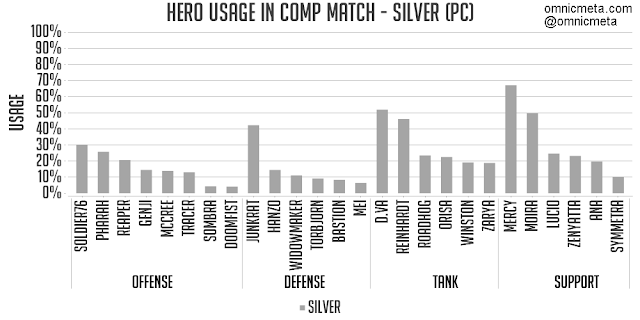 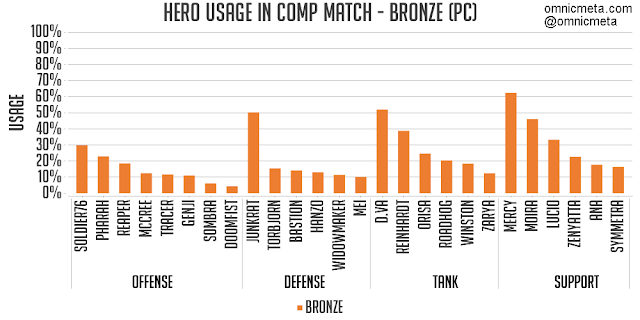