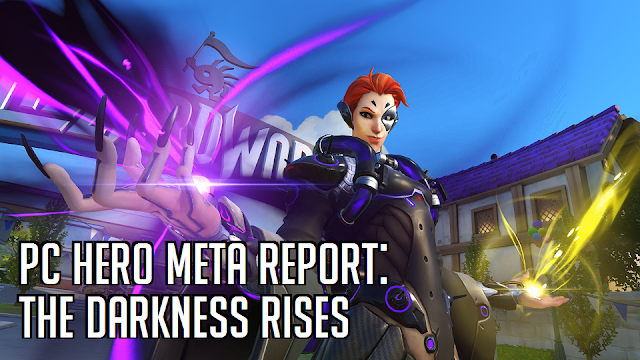 The patch last week caused a huge shift in the meta.  The support meta in general has seen a huge change as Mercy's Valkyrie (and Resurrect) were strongly nerfed.  With the change to other support heroes, we can expect that the DPS and tank metas will continue to evolve as well - especially as the pro players show us optimal team compositions in Overwatch League Stage 2.  As always I hope you enjoy this report!
- Switch

The above infographic presents the top two heroes gaining the most usage since the last report.  We see support heroes occupying the top two slots in nearly every tier, as Moira sees a huge bump in play (+21% average).  Moira has an interesting kit as she can heal multiple targets at once using both her primary heal and her biotic orbs, provided the teammates are close enough to her.  We also see both Lucio (+12% average) and Ana (+9% average) seeing quite a bit more play depending on the tier.  Honorable mentions this week are D.Va (+5% average), and Roadhog (+3% average), who both continue to find more traction in the Tank meta.

Mercy received a huge nerf as part of the latest patch, and that has caused many players to stop using her.  Her usage decline is greater as the higher tiers, creating a huge void that needed to be filled by those support heroes mentioned before.  We also see a general decline in Junkrat (-4% average) , who saw a small nerf to his Concussive mine (damage falloff added) that affected his ability to provide area-of-effect damage and confirm kills.  We also see a significant decline in Soldier (-4% average) and Zarya (-3% average). 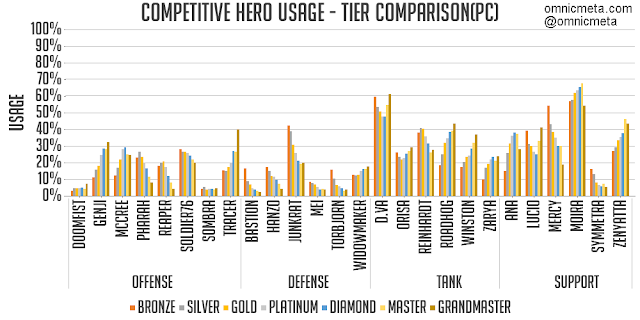 The above chart breaks down average hero usage by tier, grouped by category (Offense, Defense, Tank, Support).  The overall current landscape continues to see great diversity at each role (DPS, Tank, Support) but that may change in the future as the meta shifts after the Mercy nerfs.  Dive and aggressive team compositions are remaining popular, but we also see quite a few compositions centered around Orisa/Reinhardt as main tanks.  Barrier team compositions remain popular as spam (Junkrat, etc) continue to be played heavily at all tiers. 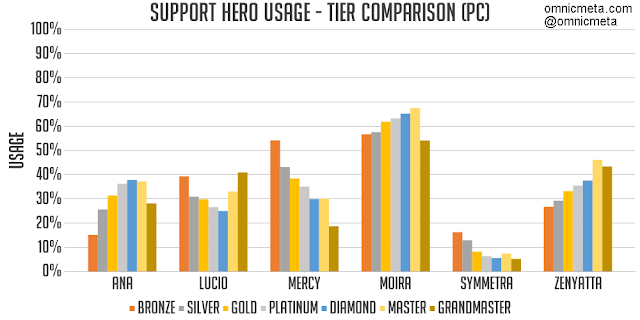 The biggest changes after the patch is to the Support meta, which has shift from Mercy to Moira.  Moira is more frequently being played as the main healer, with great winrates and overall viability.  The main challenge with using Moira of course is keeping teammates in range of primary heals, which is likely why we are also seeing Ana, Zenyatta, and (to some degree) Mercy.  After the nerf, Mercy is still useful as a main healer, but her ultimate no longer has the incredible value it once was.  That said, both Ana and Mercy's winrates are some of the lowest in the game, so playing those supports as off-healers alongside Moira may give the most success. 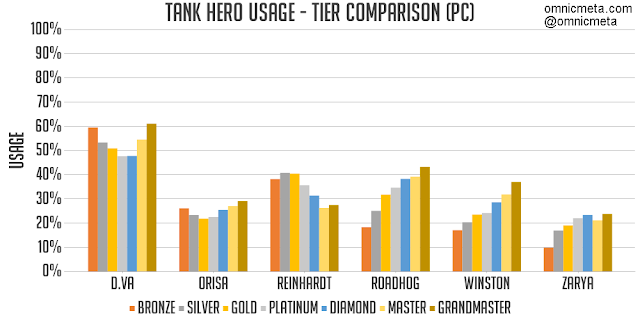 The Tank meta continues to evolve.  D.Va continues to be the most popular tank across the board, as she is the true utility tank that outputs high DPS, damage soak with Defense Matrix, and high mobility.  The trend of Roadhog climbing back into the meta continues, while he isn't as popular at the lower tiers, he is the #2 tank at the higher tiers.  Reinhardt has established himself back into the meta (particularly at lower tiers) and combined with Orisa, traditional anchor tanks are on roughly 60% of teams.  Zarya is least played Tank hero in the game right now, a fact that might surprise a few players.  Overall, Tanks are something to keep an eye on, especially as Moira and Ana are being much more as supports. The shift to area-of-effect healing in general may bring triple- and quad-tank compositions. 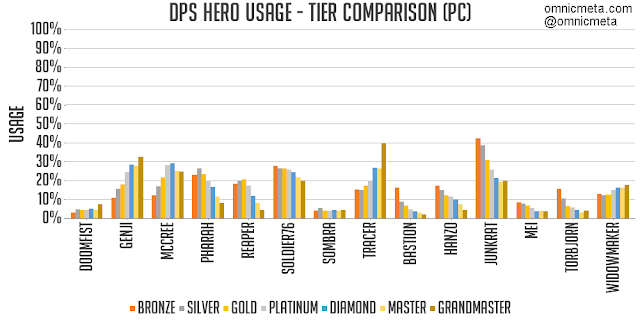 DPS hero play doesn't see any large changes.  However, there is a 8% shift on average from DPS to tanks, which may be a symptom of the Mercy changes.  The biggest change is to Junkrat following the nerf to Concussive Mine - by adding damage falloff.  Junkrat's damage output was reduced, which has led to two trends: lower winrates and fewer players choosing him.  While Rip-tire is still a very strong ability that charges fast, Junkrat's viability appears to have been knocked down a notch.  Soldier has also declined quite a bit in every tier - he is down 4% on average across all tiers.  It may the case the Soldier players are choosing off-tanks instead.  Otherwise, the general trend of Soldier/Junkrat at all tiers, Genji/McCree/Tracer at high tiers, and Pharah/Reaper at low tiers continues. 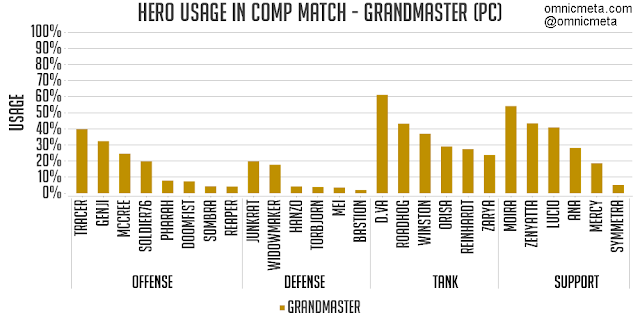 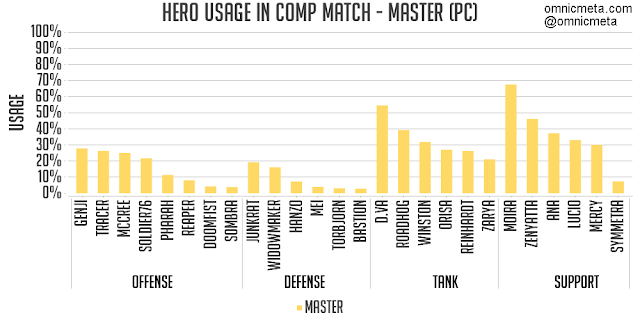 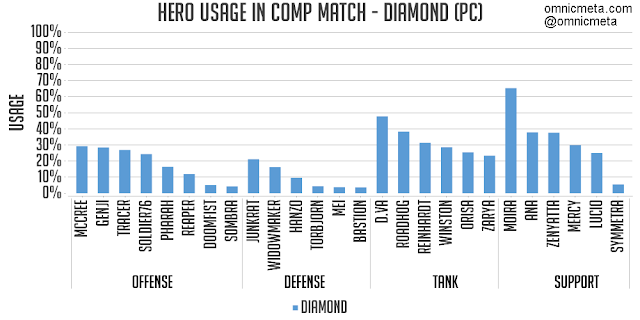 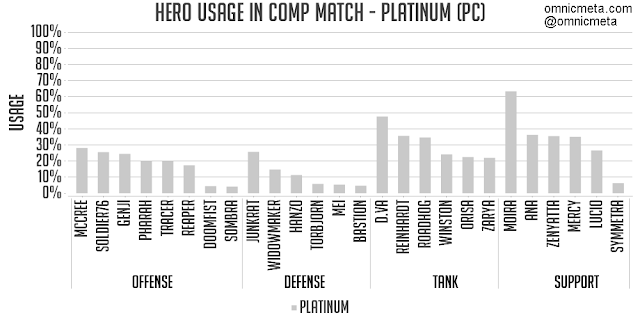 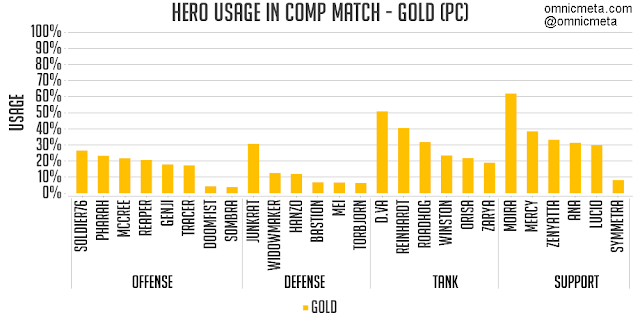 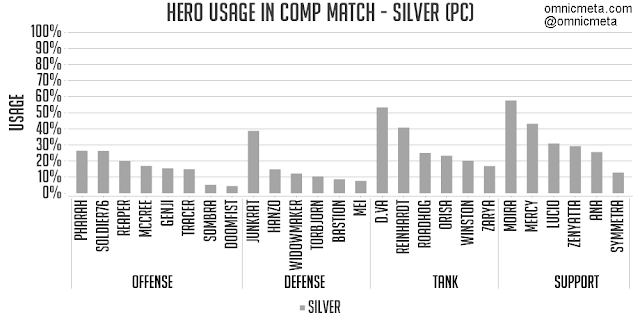 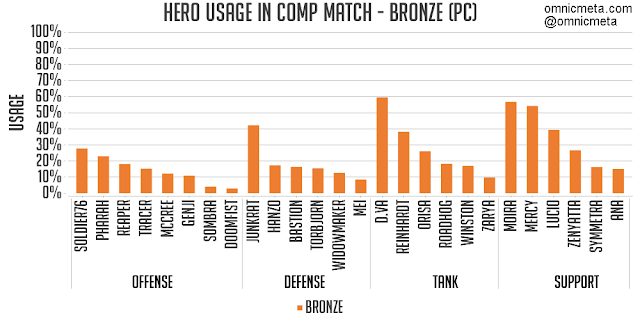