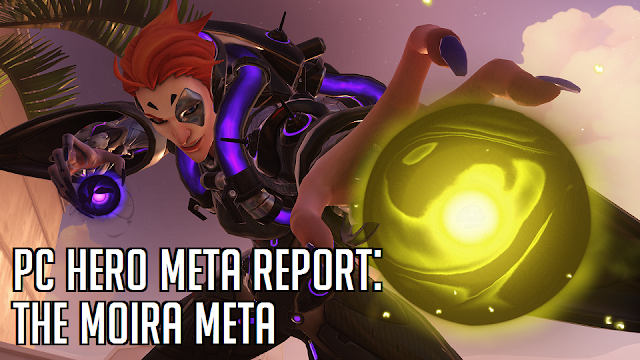 Let me be one of the first to welcome you to the Moira meta.  Since she was made available for competitive nearly two weeks ago, Moira has been growing in popularity.  She is a support hero that fills an existing gap: a main healer that has significant offensive capability.  Her skill ceiling is high, and the community at large finds her fun to play (and frustrating to play against).  She has already made a huge impact on the meta, and in turn impacted Mercy/Ana/Lucio/Zenyatta play.  As always I hope you enjoy this report!
- Switch

New hero Moira has been on a tear since she was first made available for competitive.  Released nearly two weeks ago, she has become one of the most popular heroes in Overwatch.  Moira is currently being played at around 40% usage rate in Tiers Bronze -> Platinum and 34% in Diamond / Master.  Only Grandmaster has usage less than 33%, though in the past week her play has increased dramatically across all tiers.  Moira has experienced the strongest debut of any hero in Overwatch, and without a nerf imminent.  More and more players seem to be picking Moira up, as the she is seen as both as effective and a fun hero to play.

The above infographic presents the top two heroes gaining the most usage since the last report.  Ana has seen a big boost in play, all stemming from the buff to her weapon damage (and the nerf to Mercy).  Note that her usage has actually fallen since Moira was introduced, but she still has seen a net increase.  As far as #2 biggest gainer, we see few interesting trends.  The most interesting is the big increase in D.Va at the highest tiers.  D.Va is being used as a counter to Moira's Biotic Damage Orb - and can shut down a big part of Moira's kit.  Widowmaker has seen a uptick in play across most of the tiers as well.  The final honorable mentions is Roadhog, who continues to tick slowly up in play each week.

With the Resurrect nerf, the Ana weapon buff, and the introduction to Moira - Mercy has completely tanked.  While she is still a huge part of the meta (~60% usage across all tiers), she is no longer the "always pick" that she once was.  Zenyatta has also fallen greatly, though still played.  With Moira being released, she is commonly being played as an off-support, giving Zenyatta much more competition.  Note that for both Mercy and Zenyatta, these heroes continue to be quite viable with very high winrates.  Honorable mentions for biggest losers this report are Lucio and Zarya - both down about 3% in play. 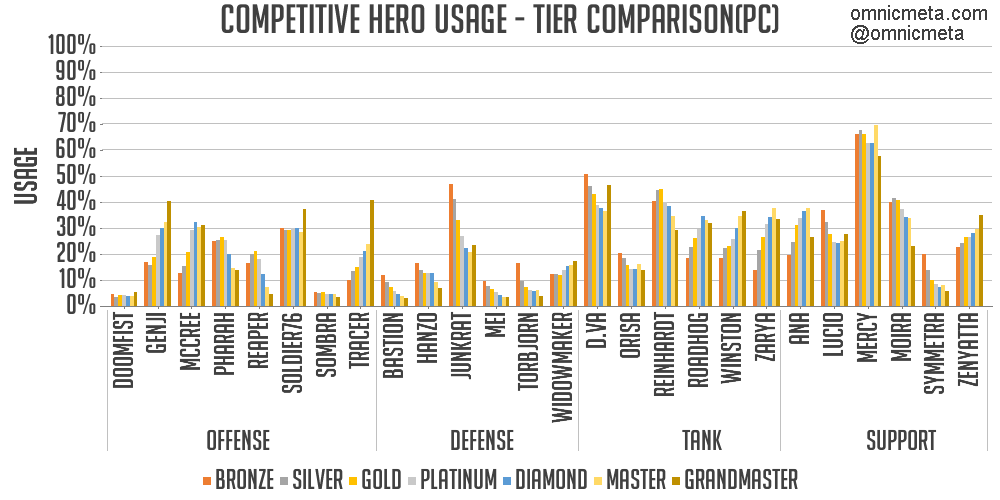 With a new (viable) hero coming out, players might expect the meta to shift away from diversity and towards stronger hero preferences.  However, that has not been the case.  The current state of hero meta on PC is some of the most diverse that we've seen - a good handful of viable options in each category.  Furthermore, teams are averaging roughly two DPS, two tanks, and two supports per match.  A great time to be playing Overwatch, and possible one of the most balanced metas we've seen.

Starting with the category that has seen the most change, Support play has finally changed from the Mercy-dominated meta.  Many players were waiting for this day after seeing multiple Mercy mains and one-tricks in their game.  While she still remains the most popular hero in Overwatch at nearly 60% usage across the tiers, her usage has nearly been cut in half from her 100% usage days.  We can thank the Ana damage buff and new hero Moira for the big shift, as together they are now claiming 50% to 70% usage depending on the tier.  In other words, most of the time you can expect at least one of them to be in your games right now.  Ana is no longer one of the least played heroes in Overwatch, and has taken quite a bit of main healing play time from Mercy.  However, a word of caution:  Ana's winrates continue to be the lowest among support heroes and less than 50% for all tiers of play.  Ana experts will see more success, but she can be a difficult hero to pick up and play.  Interestingly, we see a split in how Moira is being played depending on the tier.  At the highest tiers (Diamond -> Grandmaster), Mercy and Ana appear to be sole occupants of the "main healer slot", but at Bronze -> Platinum, roughly 10% of players are likely using Moira as the main healer.  Finally, both Lucio and Zenyatta's play keeps creeping downward (Lucio down -3% and Zenyatta down -9% across the tiers).  While both heroes are still having a great impact in game (speedboost and discord), Moira directly competes with those two heroes for the off-healer slot.

The two most popular tanks this report are D.Va and Reinhardt, .  After climbing back into the meta, Reinhardt's usage has appeared to stabilize.  He's on roughly 1 of 3 teams currently, and is seen slightly more frequently at the lower tiers.  Most popular tank D.Va's usage has jumped +7% on average in tiers Diamond -> Grandmaster this report - likely due to the introduction of Moira.  Her ability to negate much of the damage of Moira's kit using Defense Matrix can be essential in this Moira meta.  Tank play in general continues its slow shift away from dive team compositions started many months ago.  Dive hero Winston continues to drop, down another 2% across all tiers of play.  He has dropped in absolute popularity (#5 tank across most tiers), but is still being played at a high rate at the highest tiers.  In other words, while dive continues to be on the decline, it is still very much alive for Master and Grandmaster players (Note dive hero D.Va as a very popular pick).  Similarly, Zarya's usage continues to fall as she is down -3% across all tiers of play.  Based on trends, it seems likely that the dip is due to the increase in D.Va play.  Zarya continues to be strong as players continue to highly value Graviton Surge, with the Moira players happily combining ultimates with Zarya.  Finally, Roadhog continues to climb back into the meta.  His usage appears to have stabilized at the lower tiers, while Diamond -> Grandmaster he is up another +2%.  Roadhog is now being played at a similar rate to Winston and Zarya - making him an important part of the meta.  That is a statement that many players wouldn't have expected after his original Hook Combo nerf.

The Offense meta continues to be a diverse set of viable heroes.  Broadly speaking, the usual suspects of Junkrat/Soldier/Pharah are popular at the low tiers, and Genji/McCree/Soldier at the high tiers (with Tracer at Grandmaster).  Believe it or not, with the introduction of Moira, there are slightly fewer players choosing Offense and Defense heroes in general.  Junkrat has seen the biggest dip (down -3%), while Reaper has fallen another 2%.  However, there are number of heroes seeing more play depending on the tier.  At the high tiers, Genji (+3%) and Tracer (+2%) are seeing an increase in play, while McCree (-3%) has fallen.  It appears that high-tier flankers have no been put off with Moira in the meta, and instead have been enjoying farming the many tanks being played.  At low tiers, there isn't any hero that has gained substantial usage.  In general, the DPS meta may be stable, or at the beginning of a shift.  It may simply be that the pro scene hasn't just influence ladder as there have not yet been pro matches played on the Moira patch.  I think we can expect some shift in the future. 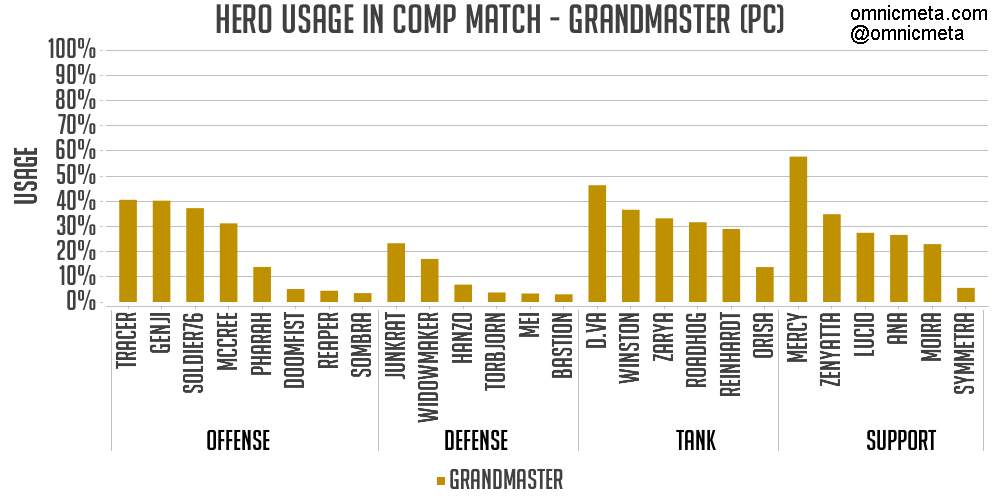 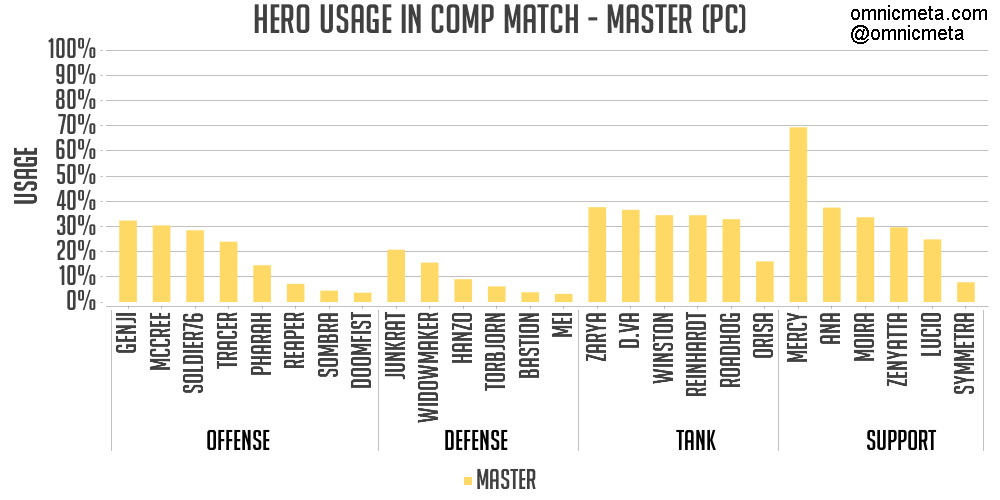 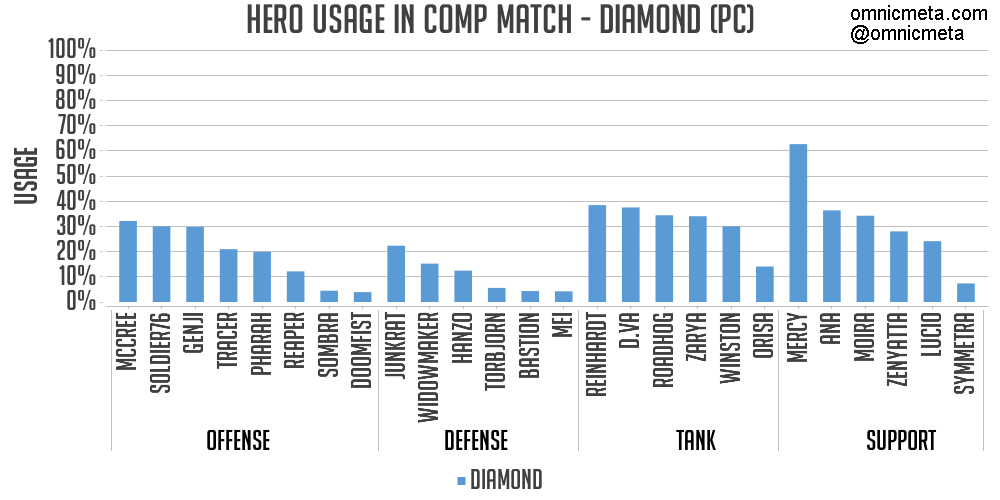 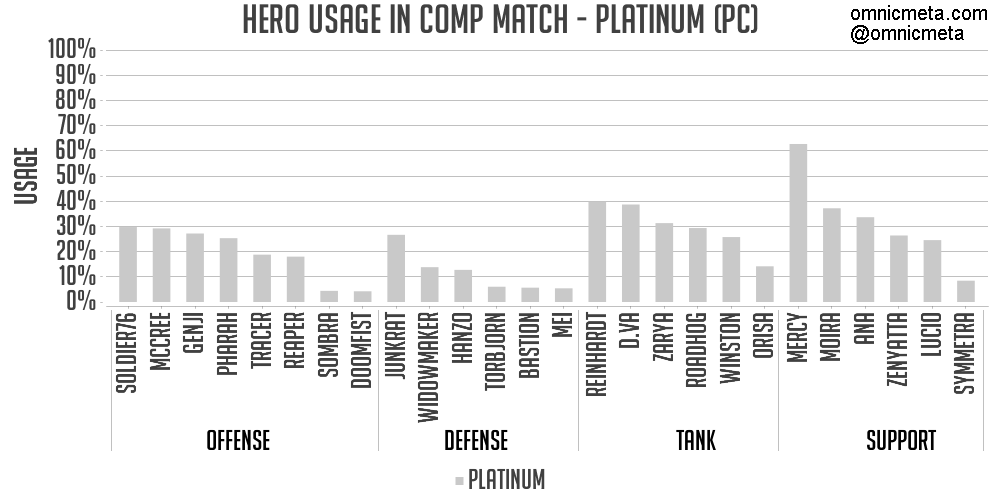 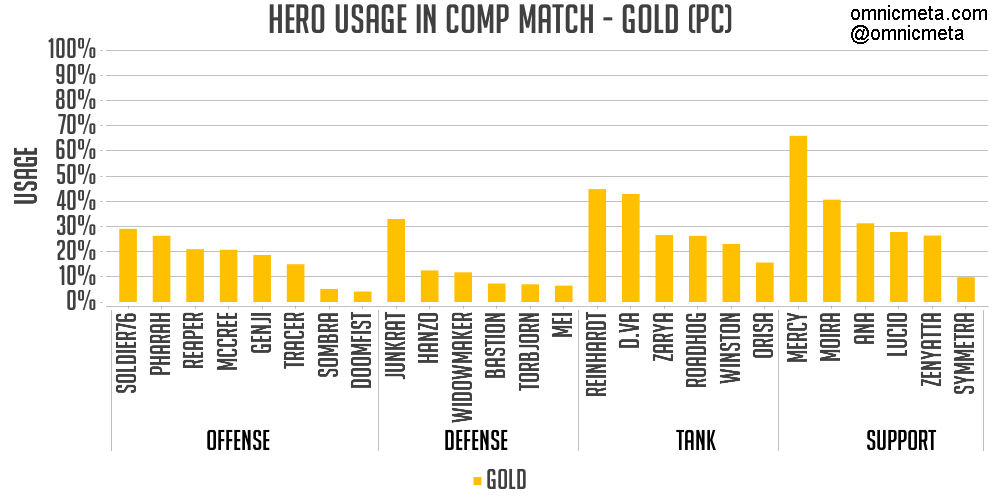 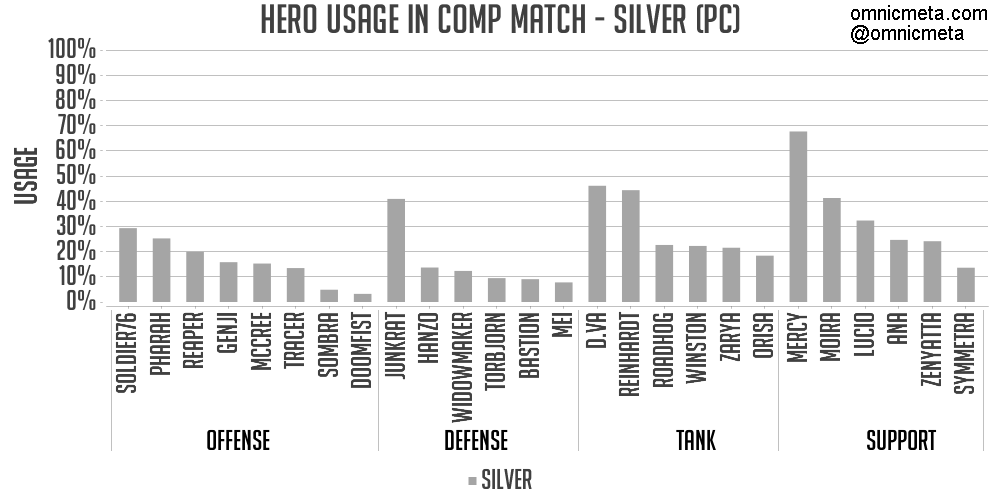 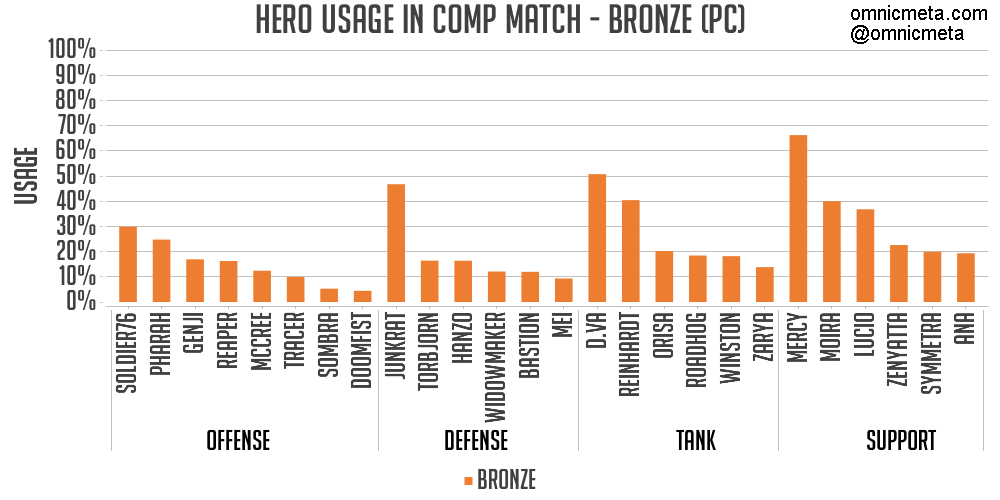