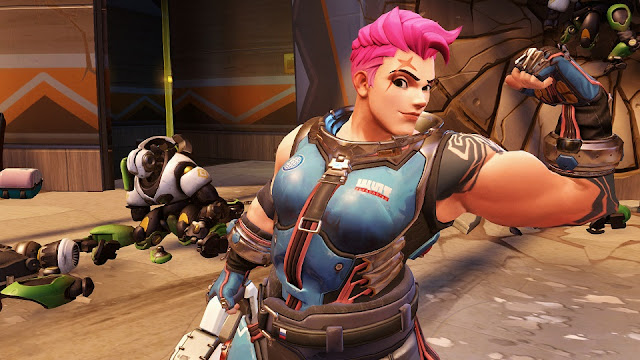 The Overwatch team has been on a tear recently, releasing a lot of hero changes to live and PTR servers.  Patch 1.13 released one week ago, and we are already seeing some of the effects in the current meta.  Take a look.... I hope you enjoy this week's PC hero meta report.
- Switch 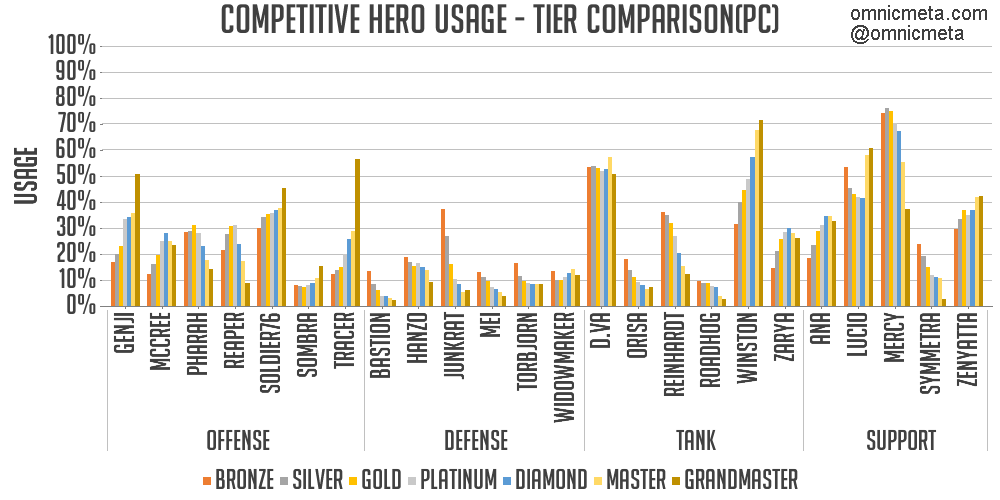 Last week brought the new Patch 1.13 and all of its hero changes to live servers, and appear to have created some inital buzz in the meta.  The biggest apparent change?  D.Va and Winston have stopped rising in usage for the first time in months.  In fact, mainstay D.Va has dropped in usage significantly.  Why the change you might ask?  Well, bug fixes / buffs to Reinhardt and Zarya appear to have created a wave of new tank play, particularly at the highest tiers.  For offensive heroes Genji is being played more across the tiers, while interest in Junkrat is also rising (with pro play and new buffs on the horizon).

For the first time in months, there is no consistent top 2 hero gainers across the tiers.  This indicates a shifting meta, with players trying out heroes to fit in / counter the meta, as well as heroes buffed in recent Patch 1.13. We find that Zarya is the bigger winner in the higher tiers, fresh off her buff preventing enemies from escaping her graviton surge ultimate ability.  Lucio and Zen continue to be a big part of the meta as a whole, while Junkrat also is on the rise likely due to his appearance as a anti-dive hero in pro play.
Surprises this report?  Reinhardt gains in Master and Grandmaster tiers - for the first time in months.  The bug fixes to charge and hit registration seem to be mostly fixed, making him playable again.

As far as the top 2 biggest usage losers this report, we see some trends appear.  The biggest change is the drop in D.Va play across most of the tiers - peaking at -9% at Grandmaster.  With Zarya and Reinhardt seeing more play, D.Va is the tank that appears to suffer.  Both Pharah and Mercy, long time companions, also fall in popularity this week across the tiers, reflecting a changing meta.  Ana continues her months-long descent, falling below 30% usage in most tiers.  Curiously, Reinhardt continues his fall in the lower tiers, reflecting a wave of players that are not (yet?) impressed with his buff and bug fixes. 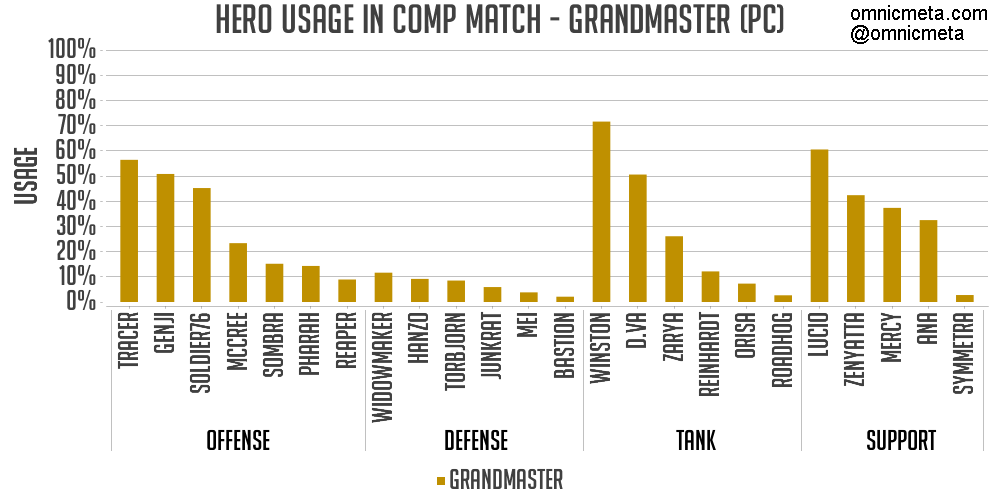 The offensive hero meta continues to shift towards Tracer (+3%), Genji (+5%), and Soldier (+1%) as the defining heroes, with Reaper and Pharah falling in usage.  Tank play is shifting, as D.Va (-9%) and Winston (-5%) both fall - as Zarya (+11%) and Reinhardt (+6%) gain.  The changes to Zarya's ult appear to be a big deal, and the bug fixes to Reinhardt were well needed.  However, D.Va and Winston are still the undisputed main tank choices right now.  Support heroes are still up in the air between four heroes - Lucio, Zenyatta, Mercy, and Ana. 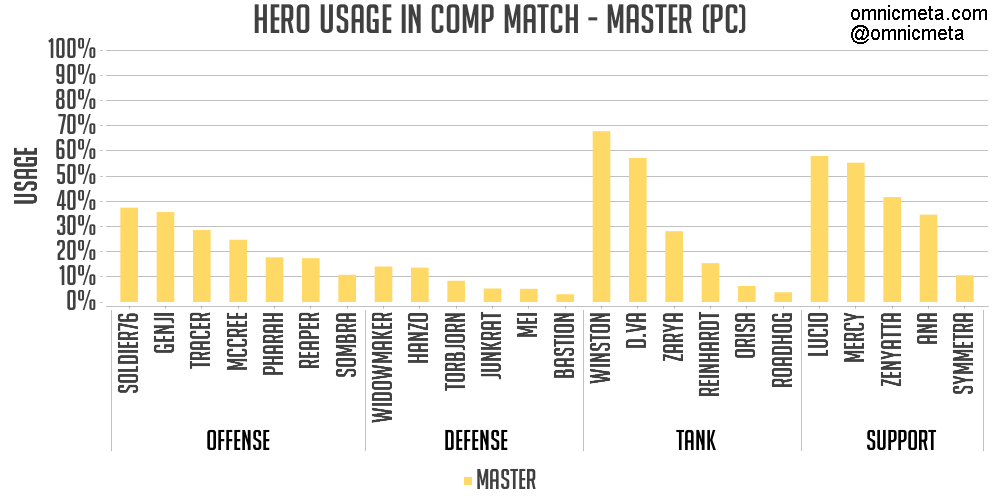 For Master tier, the wide variety of heroes continues, with dive / aggressive heroes being most popular (Soldier / Genji / Tracer), followed by anti-dive McCree.  Pharah's big (-4%) drop in usage is a trend across all of Overwatch that is shaping the competitive scene.  Widowmaker is the only big change in defense heroes, up +3% in usage this report.  Winston and D.Va remain the two clear favorite tank picks right now.  However, Patch 1.13 is causing some shifts in tank play similar to Grandmaster, with Zarya (+5%) and Reinhardt rising (+4%), while D.Va (-3%) and Winston (-1%) fall.  Dive-focused Lucio (+6%) and Zenyatta (+3%) see big increases in play, with Lucio surpassing Mercy (-4%) for the first time in weeks. 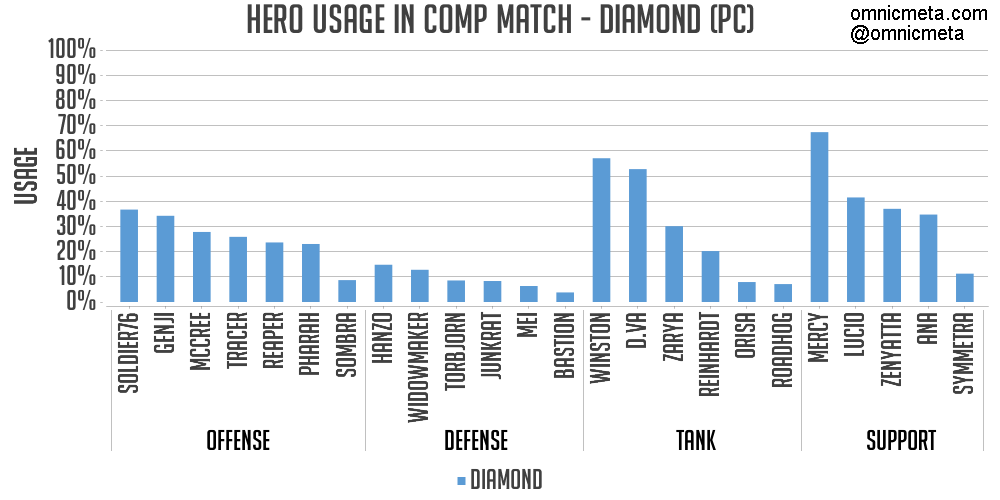 Offensive heroes in Diamond remain mostly the same as last report, with only Genji (+1%), Tracer (+2%), and Pharah (-2%) having significant changes.  The six heroes remain an active part of the meta (Soldier, Genji, McCree, Tracer, Reaper, Pharah).  Tanks also see little change this report as Winston and D.Va also define the meta in the category, although Zarya is up +3% after her buffs.   Supports see the most changes this week, with Ana (-5%) seeing the biggest movement.  Mercy (-3%) drops, but is still the defining meta  pick and the most popular hero in Diamond tier. 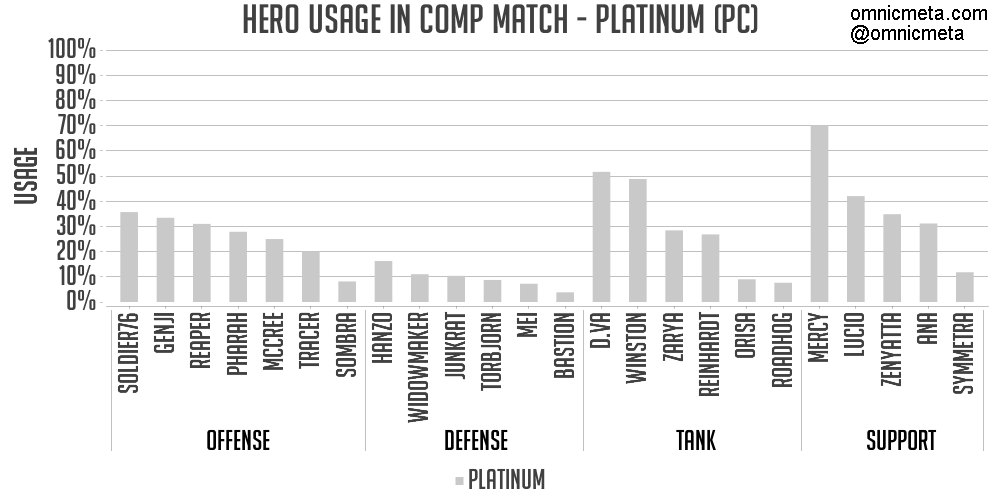 The biggest change in Platinum this report is the rise of Genji (+5%), which puts in near the top as the #2 most popular DPS hero in the tier.  The collection of six heroes (Soldier, Genji, Reaper, Pharah, McCree, Tracer) remain the most popular choices - ranging in usage from 20% to 36%. D.Va (-3%) and Winston (-1%) remain the most popular tank choices, while both Reinhardt and Zarya have stabilized after spending weeks dropping (due to Patch 1.13).  For supports, Mercy is still most popular by far despite dropping -6%, while Lucio (+3%) gains more traction this report. 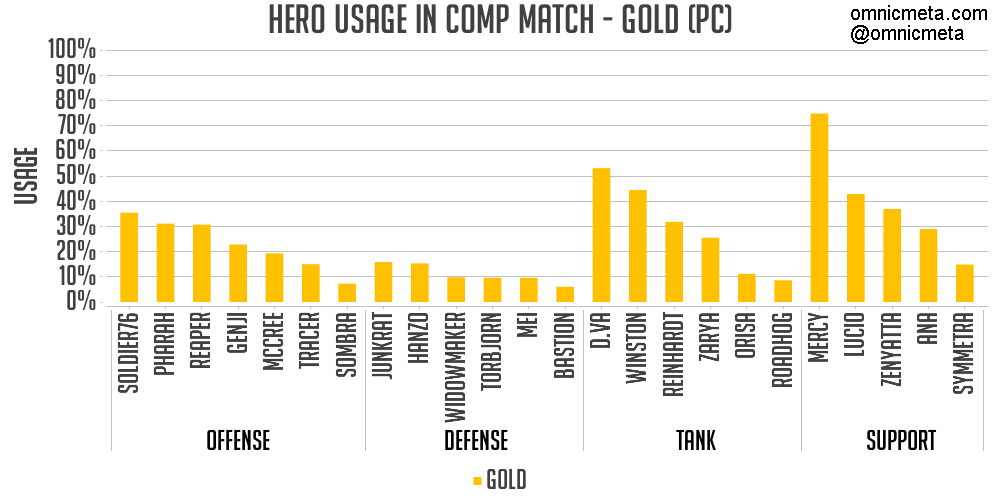 There are small usage shifts throughout offense heroes, with Genji (+2%), McCree (+2%) seeing the biggest changes this report.  The collection of DPS heroes considered most viable appears to be Soldier, Pharah, and Reaper, who are more 10% ahead of most other DPS heroes.  Tank usage remains most flat, with D.Va, Winston, and Reinhardt (-2%) being the most popular.  Reinhardt's fall in usage over the past few months and may rise in the future as players get used to Patch 1.13.  In the support category, Mercy is still the most popular by far, with Lucio (+1%) and Zenyatta (+2%) seeing some more play. 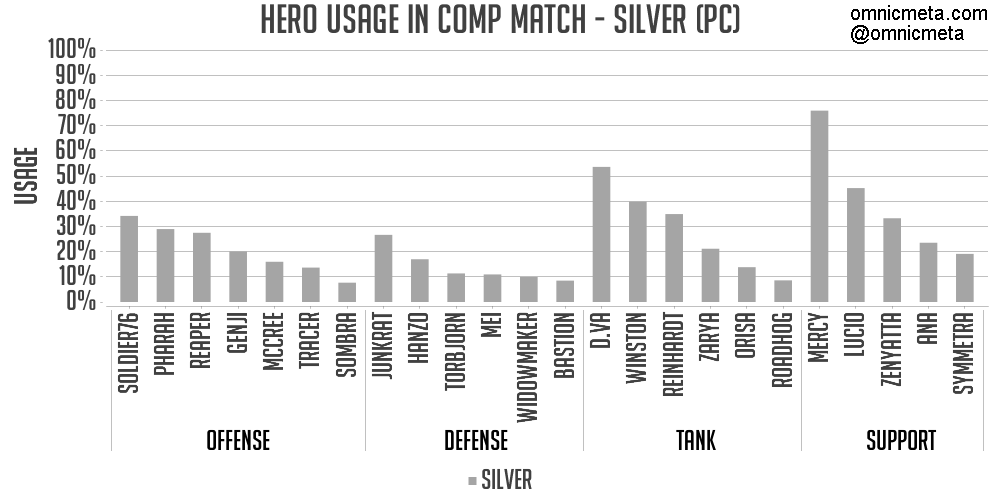 DPS play at Silver currently revolves around Soldier, Pharah, Reaper, and Junkrat (+3%) as the main parts of the meta.  This report, lesser-played Hanzo (+5%), Genji (+3%), and McCree (+2%) are up in usage, while Pharah (-4%) and Soldier (-2%) fall.  Tank play in Silver tier doesn't seem to have been affected by Patch 1.13 yet.  Reinhardt (-4%) continues to fall, giving up more ground to popular D.Va and Winston.  Mercy continues to be the most popular hero in Silver, with no signs of giving that up anytime soon.  The rest of hero play in the support category remains unchanged this week. 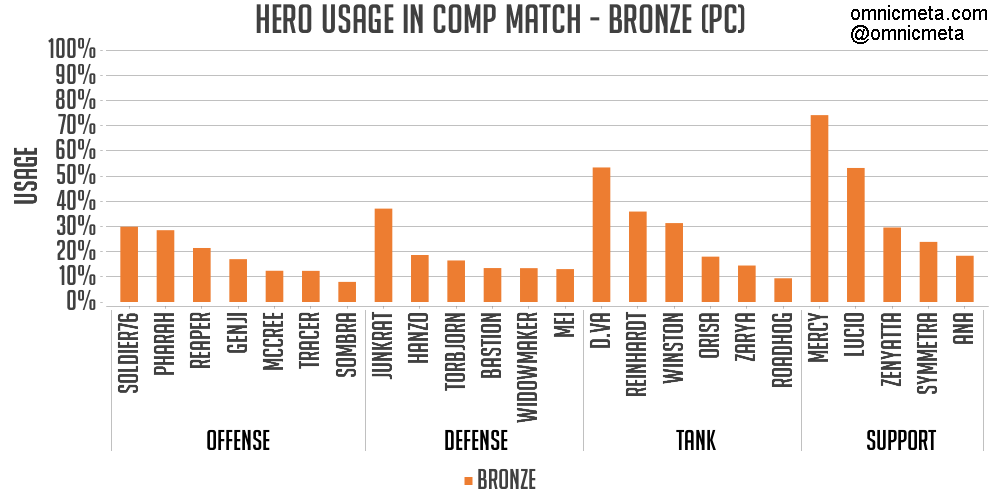 Junkrat, Soldier, and Pharah are the three heroes defining DPS play at Bronze tier the most.  With Soldier (-3%) continuing to fall in popularity, Junkrat is solidifying himself as the most popular DPS.   Tank play is mostly unaffected by Patch 1.13 so far, as the heroes in the category remain most the same.  The lone exception is the continued drop by Reinhardt (-3%), despite the buffs and bug fixes.  Mercy (+1%) and Lucio (+5%) continue to be the most popular support heroes at Bronze by far.  The influence of dive and other tiers also seem to have brought more Zenyatta play this report (+4%).