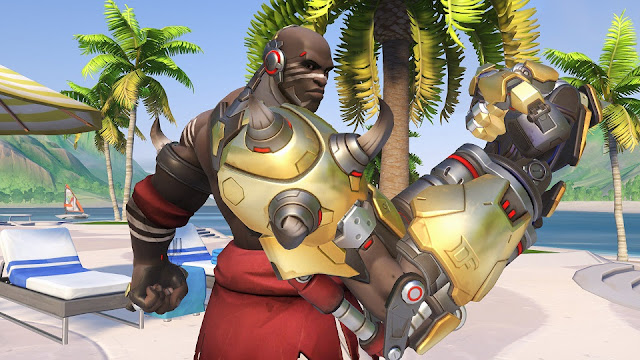 Despite only being available for a few weeks, Doomfist is already having a huge impact on the competitive Overwatch hero meta.  Doomfist is a unique DPS hero, and I encourage you to read the Patch 1.13 hero change analysis which goes into detail on his competitive impact.  DPS players in general have much reason to rejoice, as there are a large collection of viable heroes to play with the recent Reaper changes and the introduction of Doomfist.  Overall, its an exciting time to be playing competitive Overwatch, as the meta in general is shifting away from "stale" dive team compositions as Reinhardt and Zarya see increases in play. 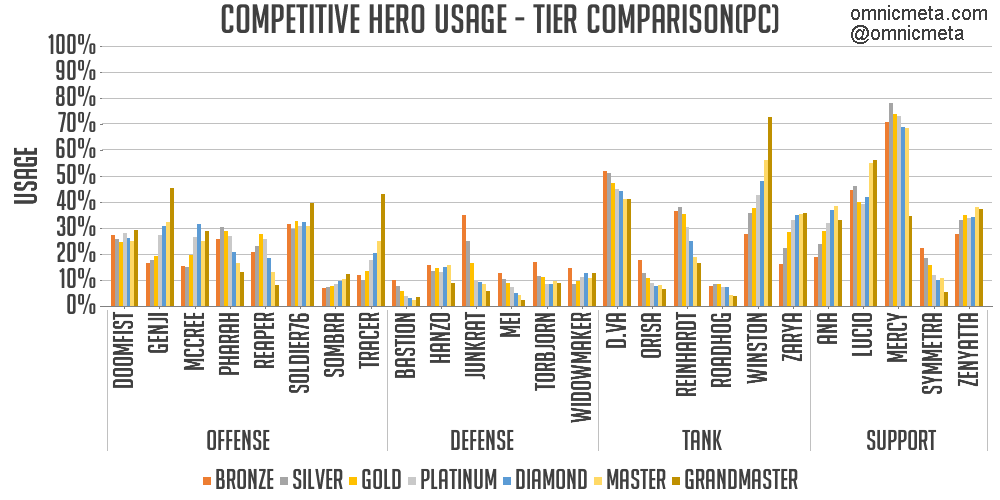 This report is all about Doomfist and his high pick rate completely shaking up the meta.  Doomfist has the highest debut of any new hero since Overwatch came out, as he has made an immediate impact and claimed more than 25% usage across all tiers - putting him as one of the most popular DPS heroes in the game.

If you are a DPS player, it's a great time to be playing competitive Overwatch - there are a lot of viable options to choose from.  From old standbys Soldier: 76 and Pharah, to dive heroes Genji and Tracer, to recently-buffed Reaper, and finally Doomfist and his counter McCree.  And that's not even mentioning the more niche picks Hanzo, and Junkrat (soon to be buffed and currently super-popular in the lower tiers).  In fact, more players are choosing to play DPS over Tank or Support this report, as DPS heroes are up 5%-15% in total usage depending on the tier.  While the DPS meta is currently slowly shifting away from traditional dive compositions of Soldier/Genji/Tracer, there are many options for filling the DPS role.

Back to Doomfist's impact on the meta.  He debuts with over 25% usage, mostly taking play away from Soldier, Tracer, and Genji.  In addition to his incredibly high burst damage from Rocket Punch, one of Doomfist's biggest strengths is his ability to synergize with many other heroes.  While many people are aware of combining Doomfists Meteor Strike ultimate with Zarya's ultimate, the potential synergies go well beyond that.  Doomfist's ability to dive in and cause chaos can effectively "flush out" enemies away from shields / D.V's defense matrix and into sight lines for other DPS heroes such as McCree, Soldier, Widowmaker, and even Pharah.  While it's still too early to really know what Doomfist's place in the meta will be, it's clear that the Overwatch community at large find him an exciting hero to play as and a frustrating hero to play against.

The other big emerging trend this report is the change in tank play.  The Patch 1.13 hero changes have really improved Reinhardt's and Zarya's effectiveness, and helped bring them back into the meta.  As arguably the only viable anchor tank in Overwatch currently, the gamebreaking bugs made Reinhardt unplayable, and likely help dictate the meta - which evolved into D.Va/Winston dive.  With the bug fixes Reinhardt is taking some of his usage back and slowly finding his way back into the meta.  Zarya's synergy with many heroes and greatly improved Graviton Surge (along with the introduction of Doomfist) has also helped make her much more popular as well.  With Reinhardt and Zarya seeing more play, D.Va and Winston aren't being played as much - though they generally remain the two most popular tanks across the competitive tiers.  With a major nerf coming to D.Va's Defense Matrix, its entirely possible that we may see even less of her and Winston in the future.

This report, we see two old faces as the big gainers this report: Reinhardt and Zarya.  With Patch 1.13 bringing significant buffs and bug fixes, those two heroes are having much more impact on the game.  Reinhardt's bug fixes in particular have made him playable again, and Zarya's buff to Graviton surge and great synergy with new hero Doomfist has helped enabled more play.  We also see some interesting shifts in McCree play across the board as a likely counter to Doomfist, and Mercy gaining (+14% at Master) to take some of the former glory from Lucio and Zenyatta.

D.Va and Winston highlight as the top 2 biggest usage losers this report.  Both heroes have lost significant play as both Zarya and Reinhardt have made their way back into the meta.  D.Va and Winston have been the diving two heroes of the dive meta and with them in rapid decline, the dive meta is likely on the decline as well.  Doomfist's introduction has also affected other offense heroes, as we see Tracer in Grandmaster (-14%) and Genji in Platinum (-6%) make the list as the top two heroes to fall in usage.  In general, all offensive heroes have ceded significant play time to Doomfist. 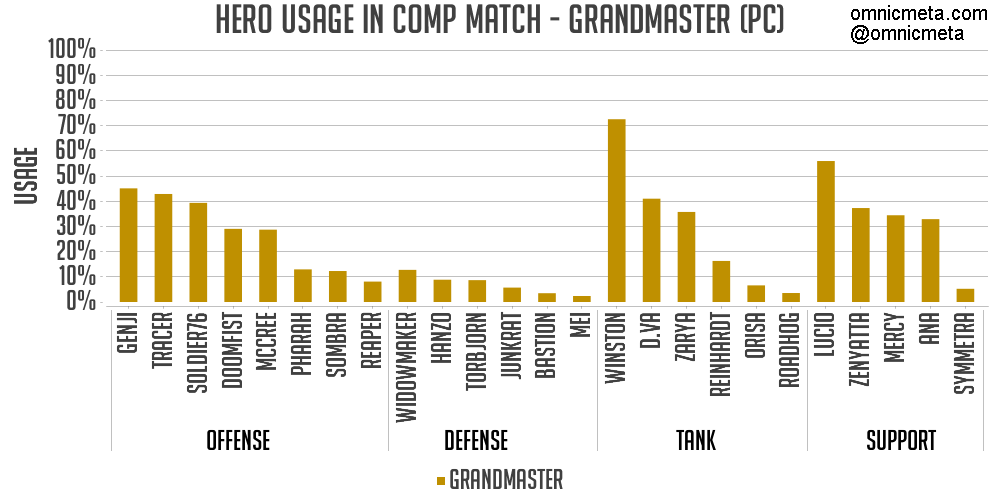 The introduction of Doomfist has shaken up the offensive heroes greatly.  The three top meta heroes last report have all fallen greatly - Tracer (-14%), Genji (-6%), Soldier (-5%).  Their fall has marked the rise of Doomfist (29% usage) and McCree (+6%).  McCree in particular is an interesting pick, as his flashbang ability is useful against many of the other popular Offense heroes - including his hard counter ability on Doomfist.  All five of those heroes are the only popular DPS heroes at the moment, with a shift in the meta clearly happening.  For tanks, Winston maintains his position as the most played of all heroes in Grandmaster tier at 73%.  Filling the second tank slot is D.Va (-10%) and up-and-comer Zarya (+10%).  Support play in Grandmaster remains mostly unchanged, as Lucio remains popular (56% usage), followed by Zenyatta, Mercy, and Ana. 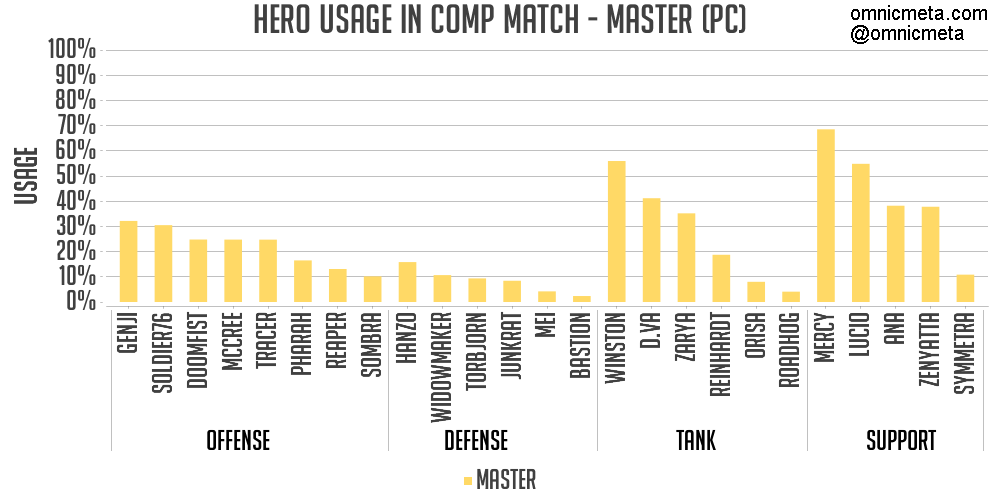 For Master tier, offensive hero preferences continue to be much less defined than in Grandmaster.  Doomfist debuts at 25% usage, taking significant share from Soldier (-7%), Reaper (-5%), Tracer (-4%), and Genji (-3%).  Note that Genji and Soldier remain the top DPS heroes this report.  Despite seeing a recent surge stemming from large buffs, Reaper has fallen out of the tier list this report as a result of Doomfist's debut. Several defense heroes (Hanzo +2%, Junkrat +3%) see small increases in play, as Hanzo makes the tier list and is seeing similar play to Pharah, and more play than Reaper and Sombra.  Tank play has changed considerably, as the popular heroes Winston (-12%) and D.Va (-16%) have fallen greatly in usage, giving room for a resurgent Zarya (+7%).  Zarya's ability to shield fragile heroes like Doomfist as well as combo ultimates appears to be helping her gain some traction.  Also of note is the uptick in Reinhardt play this report (+3%) as the bug fixes have benefited him greatly. On the support side, Mercy has increased in play considerably, up 14% in usage this report. All other healers have fallen, most notably Lucio (-4%) and Zenyatta (-4%) seem to point to Mercy's perceived value in Master tier.  Mercy retakes her #1 hero status this report, while Lucio, Ana, and Zenyatta remain large parts of the support meta. 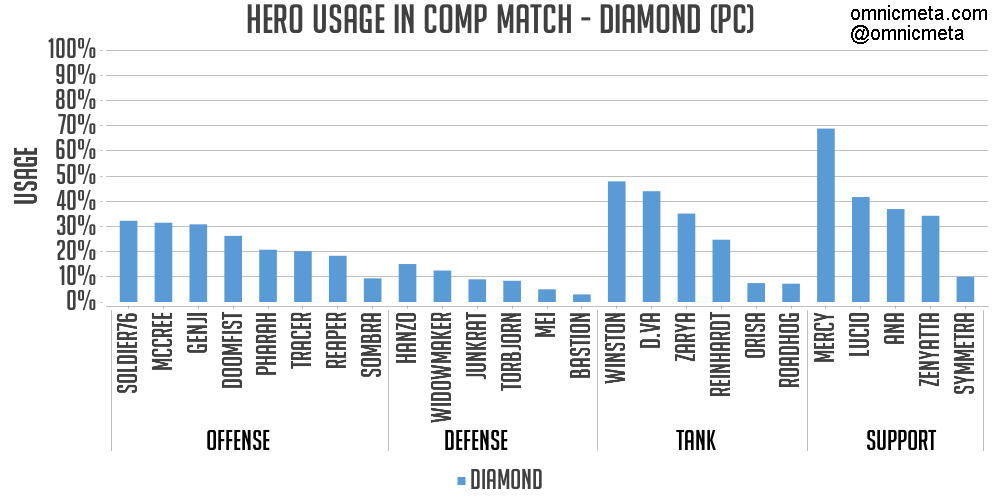 At Diamond tier, Doomfist debuts at 26% usage with McCree (+4%) being the biggest gainer for DPS heroes this report.  McCree's rise in play makes him is as the #2 most popular DPS hero in Diamond right now, as he is a strong counter to the many Doomfist's running around.  Soldier (-5%) and Genji (-3%) see dips in play and round out the other popular DPS heroes currently.  Note that Tracer (-6%) and Reaper (-5%) have also fallen greatly in play at Diamond with Doomfist's release.  Tank heroes show similar trends to the higher tiers, with D.Va (-9%) and Winston (-9%) falling in play while Reinhardt (+4%) and Zarya (+5%) rise.  All four of those tank heroes are quite viable in the current meta, and it will definitely be worth keeping a close eye on whether the shift to Zarya continues to dislodge Winston and D.Va.  For supports, Mercy remains the most played hero by far, with the 2nd healer slot typically going to Lucio, Ana, or Zenyatta.  One interesting support change this week: Ana's usage has gone up +3% this report, while Zenyatta's usage has gone down -4%.  This may be yet another sign that dive is no longer the (completely) dominant team composition. 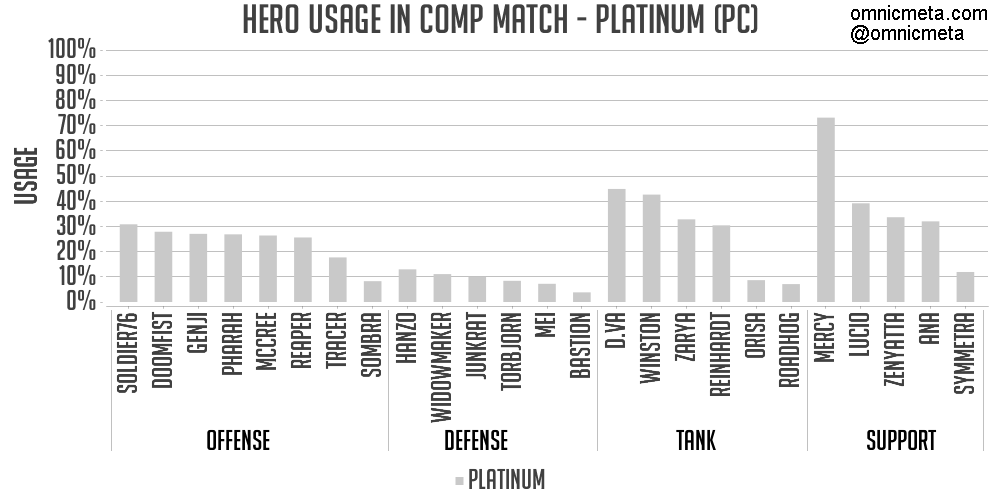 DPS heroes have flattened out considerably during the introduction of Doomfist. Six DPS heroes are popular and withing 5% usage of each other - Soldier, Doomfist, Genji, Pharah, McCree, and Reaper.  This collection of six popular choices  likely shows a meta in transition at Platinum.  Many heroes have fallen in usage as Doomfist was released, as Genji (-6%), Soldier (-5%), and Reaper (-5%).  Time will tell if these shifts continue - We may find Doomfist as the most popular DPS in Platinum in the future.  Tank play in Platinum tells a similar story as other tiers - more and more players are coming back to Zarya (+4%) and Reinhardt (+4%) and ditching D.Va (-7%) and Winston (+6%).  The bug fixes for Reinhardt especially were needed, and Zarya's synergy with Doomfist and other mobile heroes is starting to be realized again.  Support hero usage remains mostly unchanged from the last report, with Mercy (+3%) being the lone exception.  Mercy is still the most popular hero by far, with Lucio, Zenyatta, and Ana also being heavily played. 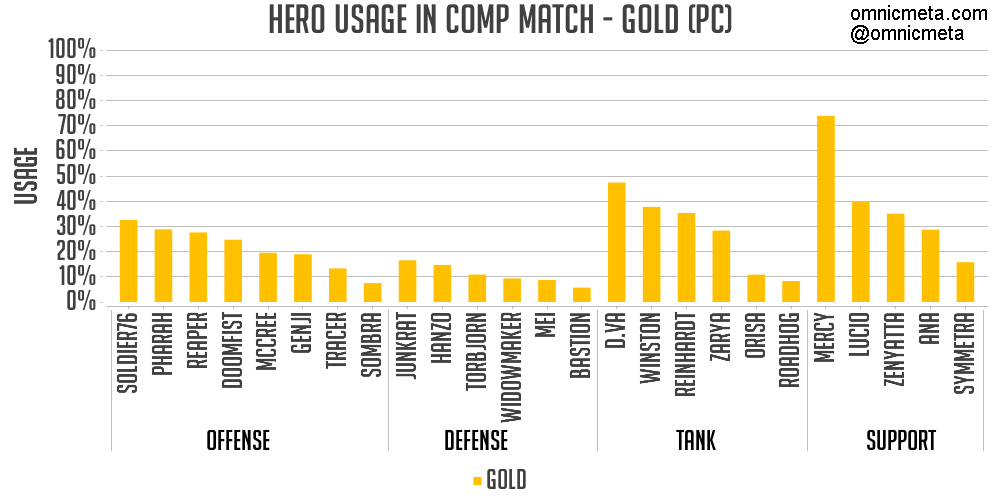 In Gold tier, Doomfist debuts with 25% usage, and groups with Soldier, Pharah, Reaper as part of the four most popular DPS heroes.  As expected, Doomfist's introduction has led to the decline in play of several offensive heroes, including Genji (-4%), Soldier (-3%), Reaper (-3%), and Pharah (-2%).  Nevertheless, Soldier remains the most popular DPS hero.  For Tanks, D.Va (-6%) remains the most popular, despite seeing a significant dip in play.  Reinhardt is up +3% in usage from his recent bug fixes, and Winston is down -7% in play.  These Tank usage changes have push Reinhardt much more into the forefront, and he continue to increase in popularity in the future.  Zarya is also increased in play (+3%), as her graviton surge buff and synergy with many popular heroes including Doomfist help to increase her viability.  Support play in Gold remains mostly unchanged, as Mercy continues to be the most popular hero.  For the 2nd support slot, Lucio (-3%) and Zenyatta (-2%) are seeing slightly less play this week, while Ana remains the clear #4 support. 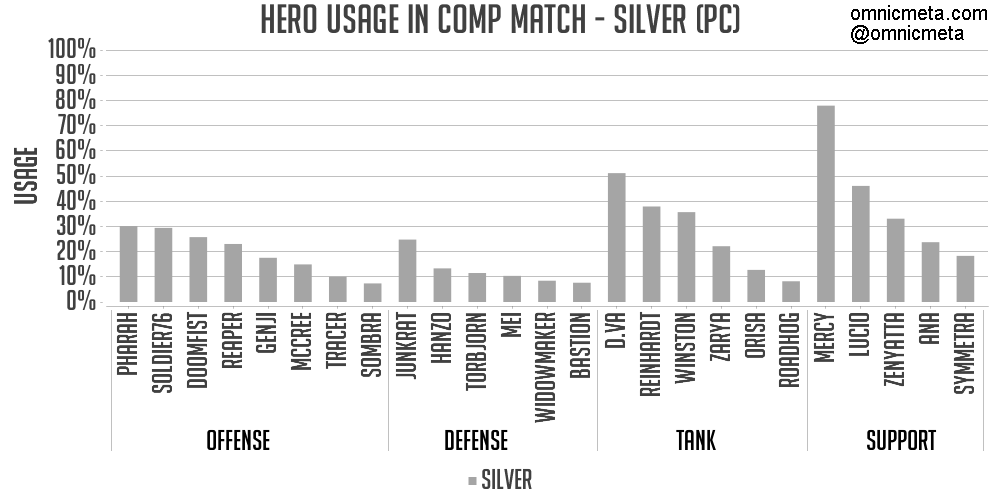 Great changes in Offensive hero play have also occurred in Silver tier.  For the first time in many months, Soldier (-5%) has been unseated as the most popular hero - by Pharah (+2%).  Doomfist is being played at a 26% usage rate, while popular heroes Reaper (-5%) and Genji (-3%) have fallen.  The four most popular DPS heroes currently have greater than 25% usage rate - Pharah, Soldier, Doomfist, and Junkrat.  For Tanks, D.Va (-2%) remains the most popular tank, while Reinhardt (+3%) has overtaken Winston (-4%) for the #2 spot.  Interestingly, the recent patch changes seem to have impacted Reinhardt, but not Zarya.  Zarya, Roadhog, and Orisa see no change in play this report.  For supports, only Mercy (+2%) sees any significant movement in usage.  She remains the most popular support by far, and the choice of second support is between ever-popular Lucio (46%) and Zenyatta (33%).  While there is not much movement in Tanks and Supports this report, we may trickle down effects from higher tiers in the near future. 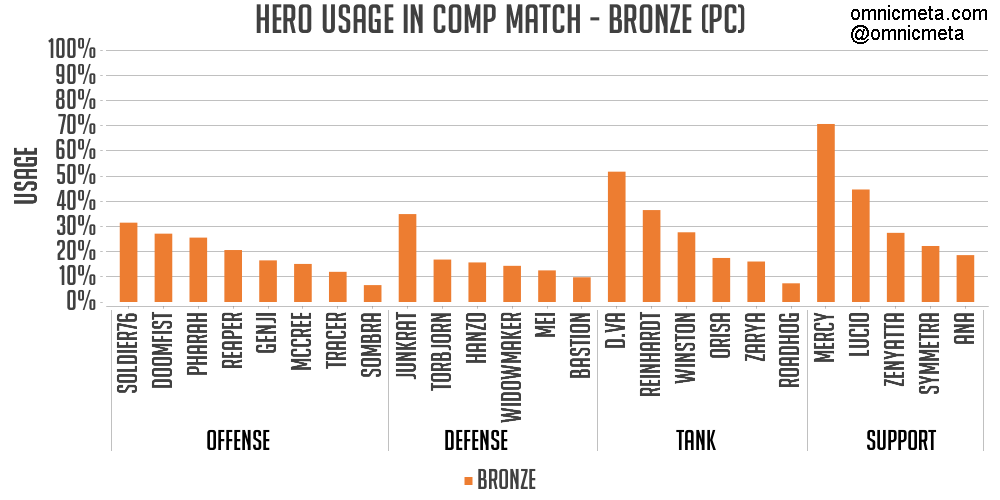 Bronze tier continues to be a very interesting tier in terms of hero play.  Junkrat remains the most popular DPS hero (despite losing 2% usage this report), with Soldier close behind.  Doomfist debuts at 27% usage, but interestingly the only DPS heroes to Pharah (-3%), Hanzo (-3%), and Bastion (-3%) have fallen.  In other words, Bronze players are playing much less Tank and Support heroes this report.  Tank play has trended downwards this report, with D.Va (-2%), Winston (-4%), and Roadhog (-2%) seeing significant decreases in play.  The Tank meta remains D.Va, Reinhardt (+2%), and Winston.  The support category continues to experience wild swings, as Lucio is the big loser, down 9% in play this report.  Other support heroes are down too,  as Mercy (-3%) and Zenyatta (-3%) have fallen.  However, Mercy and Lucio remain the most popular (by far) and most likely support heroes to see in competitive play.