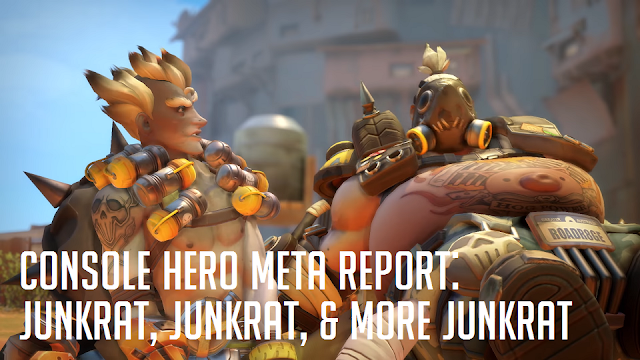 Season 6 has started off with a bang, and Junkrat and Roadhog have moved from niche pick to being big parts of the current Hero Meta.  It's a time that many players did not think would ever happen.  Junkrat is one of the most played heroes in Overwatch, and competitive players have been seeing him played everywhere and in many different game situations.  Similarly, once left for dead, Roadhog has come back with a big buff to his self healing.  Coupled with more shakeups in Tank play, Season 6 already has a much different meta than Season 5.

This report has new content!  Below each Competitive Tier (Bronze / Grandmaster) breakdown are the Top 5 heroes for the report - ranked by winrate.  The list only includes heroes that are being heavily played - at least 25% usage.  These five heroes listed in each tier are the strongest in the game currently. 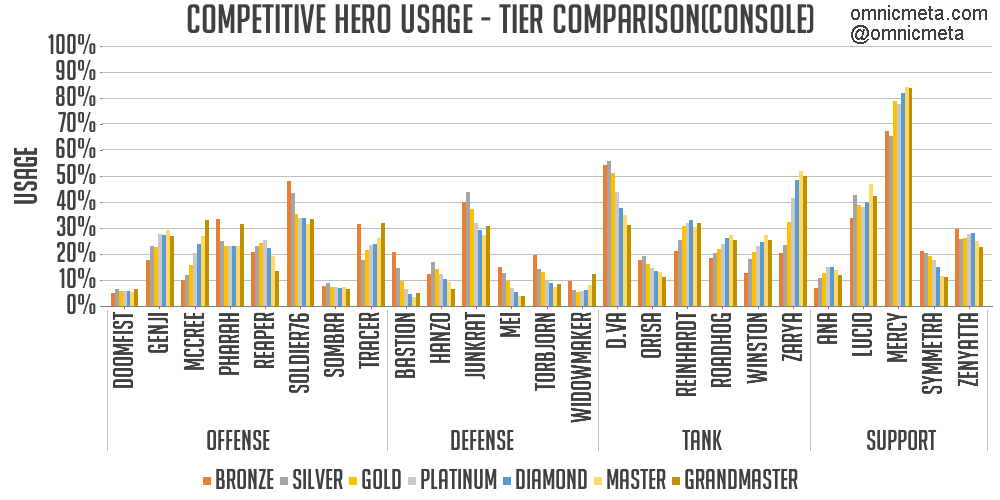 The biggest change this report this is the massive rise of Junkrat and Roadhog into the meta. Patch 1.14 was a big one, as Junkrat got double concussive mines / an improved Rip-tire ultimate, and Roadhog's liability was greatly reduced with a self healing buff.  Both changes have directly translated to much greater success in game.  Junkrat's winrates are now the top in the game for meta heroes - often several percent higher than other top heroes.  Similarly, Roadhog's "feeding" problem seems to have been resolved as his winrates are approaching normal.

At the same time, Patch 1.14 brought a huge nerf to Doomfist's Rocket Punch hit box, which has really hurt him.  He has fallen into complete niche-pick realm - and is now one of the least played heroes in the game.  That hit box nerf is rumored to have been partially reverted in PTR Patch 1.15, but it's unclear if that change will make any difference in Doomfist's popularity.

The other continuing trend is the general shakeup in Tank play.  D.Va and Winston continue to fall in usage, as other tanks like Zarya and Reinhardt start to solidify their position.  With D.Va's major nerf to Defense Matrix coming, it is entirely likely that she will completely fall out of the meta.  In terms of hero meta, these changes may affect lower tiers the most, where D.Va is currently the top tank by a wide margin.

Support play in general has not seen anything changes since the end of Season 5.  Mercy still remains the #1 hero in all of Console Overwatch by a large margin.  However, big changes are coming which may impact her play.  Though her base play (healing / Guardian Angel) is not changing, the ability to Resurrect an entire team will no longer be an option.  Coupled with the fact that Ana saw increased play in Masters/Grandmaster tier this week, there may be a support meta shift in the near future.

The biggest movers this week are the beneficiaries of Patch 1.14 buffs.  The top gainer across nearly all the tiers is Roadhog, who finally gets some of his mojo back after losing his one-shot ability.  His ability to move while healing and take 50% less damage has been a big boost to his survivability and winrates.  Similarly Junkrat's use has exploded with his buffs - double Concussive Mines and a much faster Rip-tire has really helped his fortunes on the ladder.  Junkrat is now one of the most popular DPS in Overwatch at all tiers of play.  Orisa is a honorable mention this week as she gains more thant 3% usage on average across the tiers.

Doomfist was not being played much on Console, but he usage has still tanked quite a bit this week.  He has lost nearly 10% usage on average, likely stemming from his Rocket Punch hitbox nerf and improved counter-play from heroes such as Roadhog and McCree.  Whatever the case, his winrates have tanked, making him a more niche pick.  Tanks are the other big class that have changed, as formerly popular D.Va and Winston continue to fall greatly (and out of the meta), signalling the end of dive team compositions.  Believe it or not, once-popular Winston is now the 5th most popular tank out of 6 - and even behind Roadhog now. 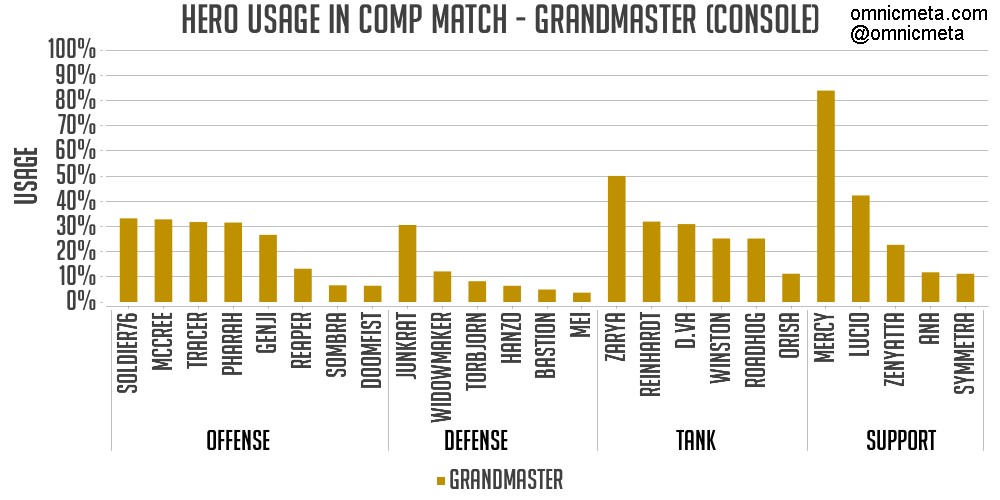 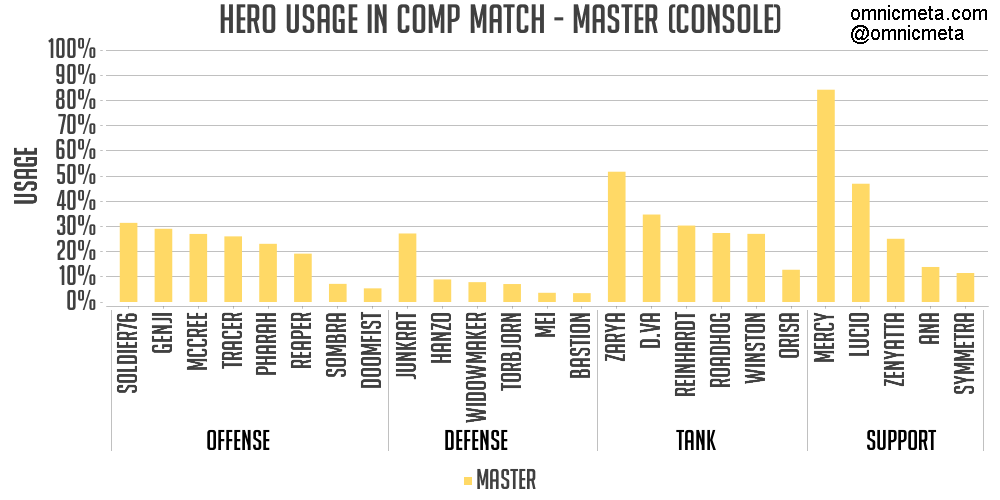 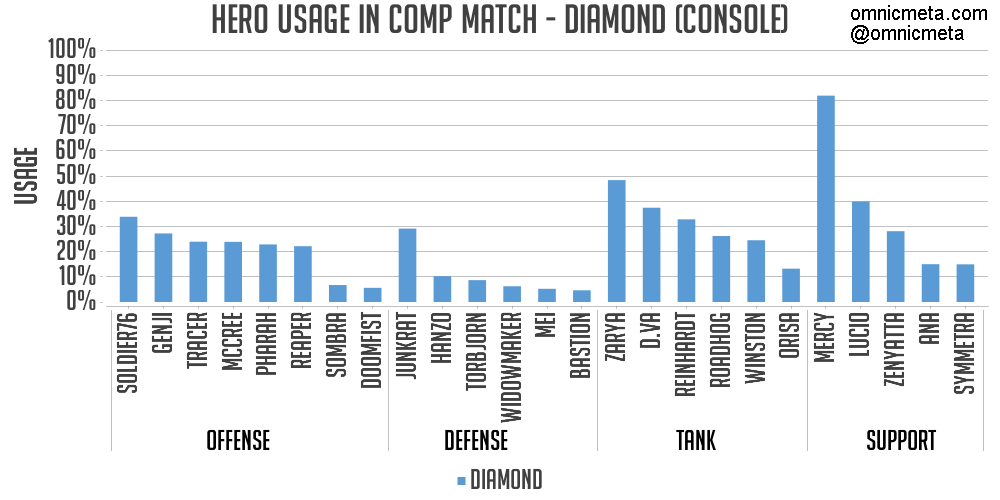 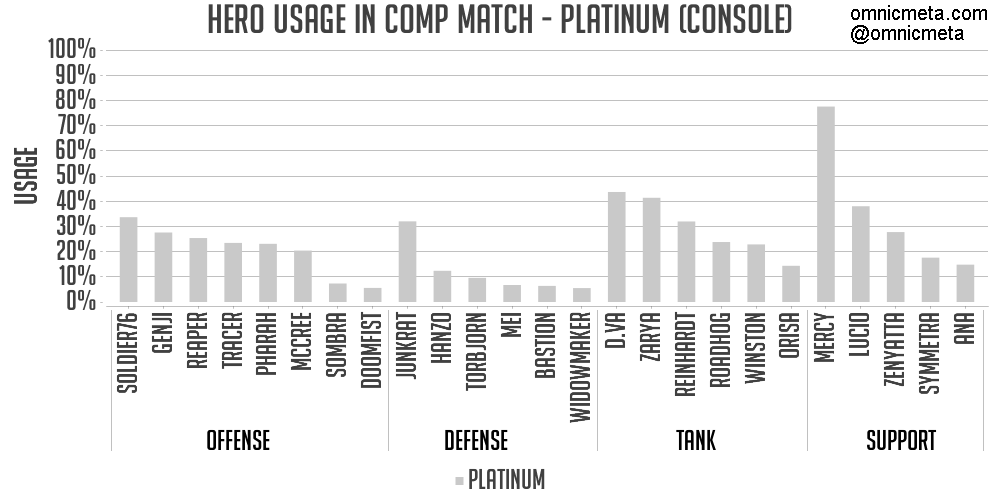 In Platinum, Junkrat (+15%) has risen to become one of the top DPS picks - as Doomfist has fallen -11% and become a niche pick.  Soldier still remains the most played DPS, followed by Junkrat, Genji, Reaper (-3%), Tracer, Pharah, and McCree (-2%).  D.Va (-4%) is being contested by Zarya for the top tank spot - and will likely lose it by the next report.  Reinhardt remains the #3 pick, while Roadhog (+15%) has overtaken Winston (-6%).  Support play remains mostly unchanged from the end of Season 5.  Mercy is the most popular support hero by far, followed by Lucio and Zenyatta. 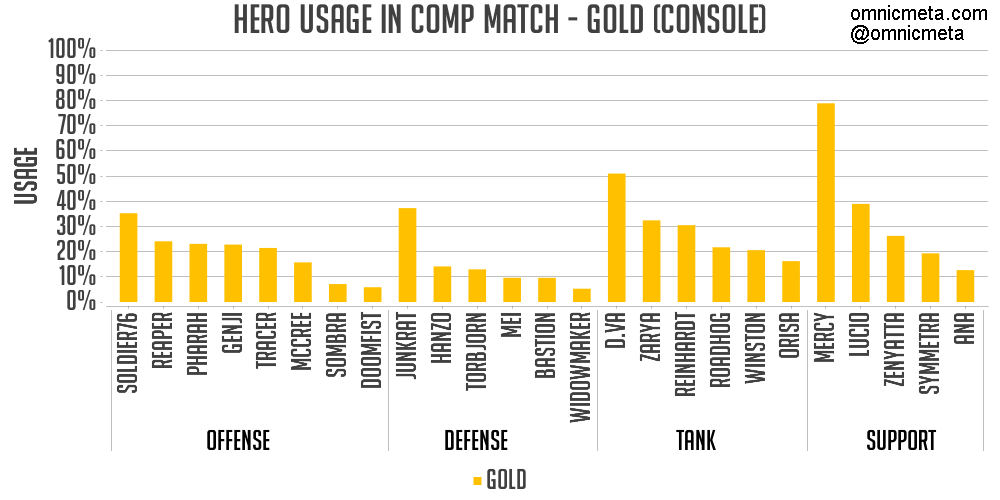 DPS play in Gold remains mostly unchanged this week except for Junkrat (+13%) and Doomfist (-9%) big moves.  Junkrat and Soldier are a cut above other DPS heroes in play, followed by Reaper, Pharah, Genji, and Tracer.  D.Va (-2%) is the #1 tank at Gold tier, with Zarya and Reinhardt (-2%) far behind in play.  Roadhog (+13%) has surged in usage, as Winston (-6%) has fallen.  Mercy (+5%) is as strong as ever - solidifying her place as the most played hero in Gold tier.  Lucio (+3%) also sees a small bump in play as one of the most popular heroes overall. 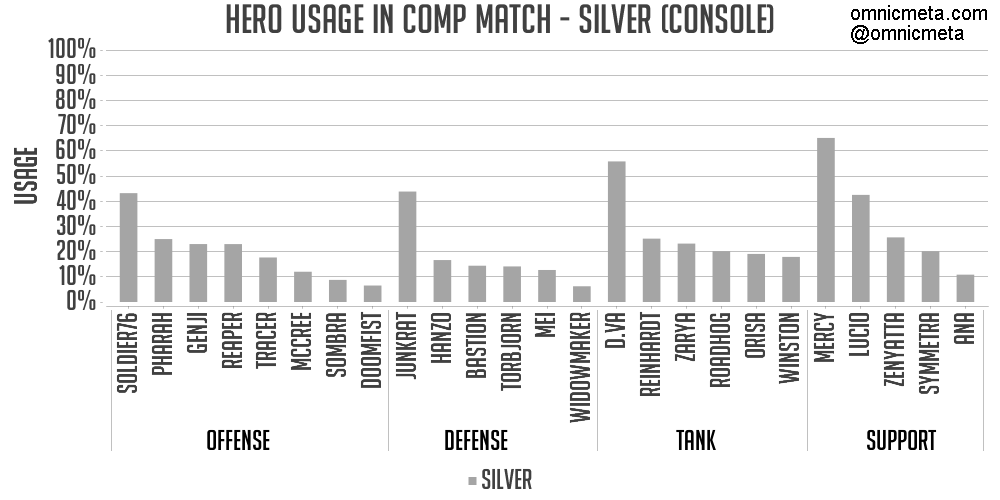 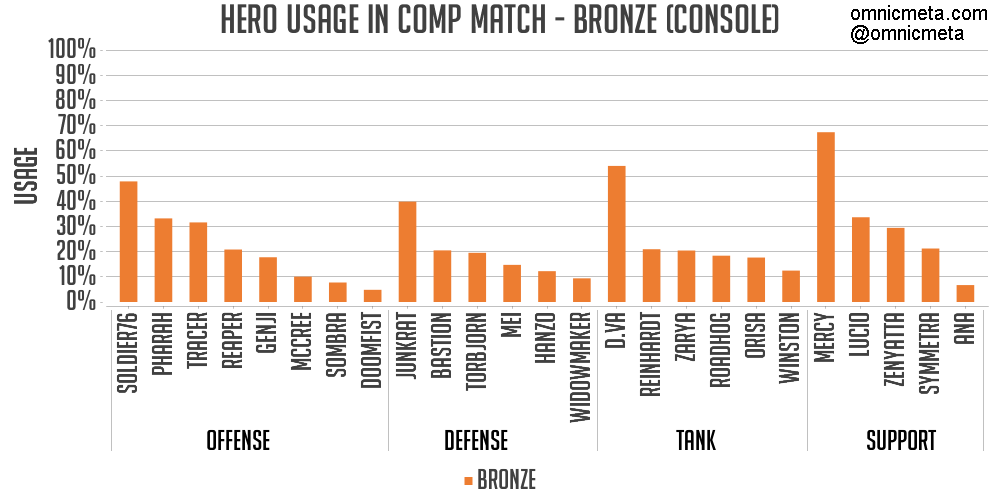 Bronze is seeing significant change in DPS play. While Junkrat retains his popularity, Soldier (+6%) and Pharah (+5%) have gained significant play - Soldier is once again the top DPS hero in Bronze tier.  Tracer (+3%) round out the most popular DPS heroes at the tier.  With a big drop from Reinhardt (-7%), D.Va (-3%) solidifies herself as the most popular tank in the tier by far.  Roadhog (+7%) and Zarya (+7%) have both gained significantly this week as Winston (-2%) has dropped.  Support play is mostly Mercy (+3%), with Lucio (-5%) and Zenyatta (+4%) competing for the second slot.


Check Out These Other Articles
Patch 1.14 - Junkrat/Roadhog Buffs, Doomfist Nerf
Click Here for the PC Hero Meta Report for September 6, 2017