Welcome to OmnicMeta's report on the state of competitive Overwatch on Console from week 1 of Season 4. In this report, we look at the meta of hero usage trends across tiers from Grandmaster through Bronze.

What this report is: A report and tier list of Overwatch hero usage and player trends across competitive ladder tiers (Grandmaster -> Bronze), covering usage for Week 1 Season 4 (a single week of S4). We want to answer the question "What are people playing at each tier?". Usage is calculated using matches played per hero for each player in our dataset. Players are then divided into tiers by their current SR at time of data capture. Note that players from different tiers often play with each other (for example Grandmaster and Master).

For information on our dataset, see the About page. 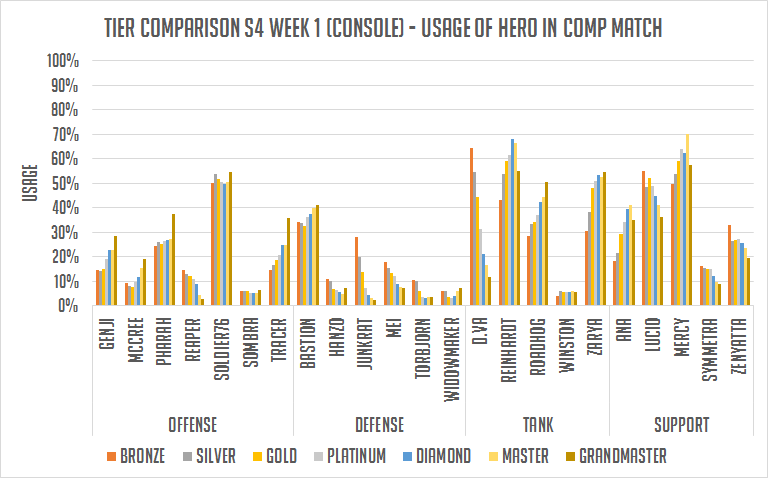 For this week, the big changes to Bastion and Mercy have arguably lead to significant changes in team compositions as compared to prior weeks. Let's take a look at each hero category. 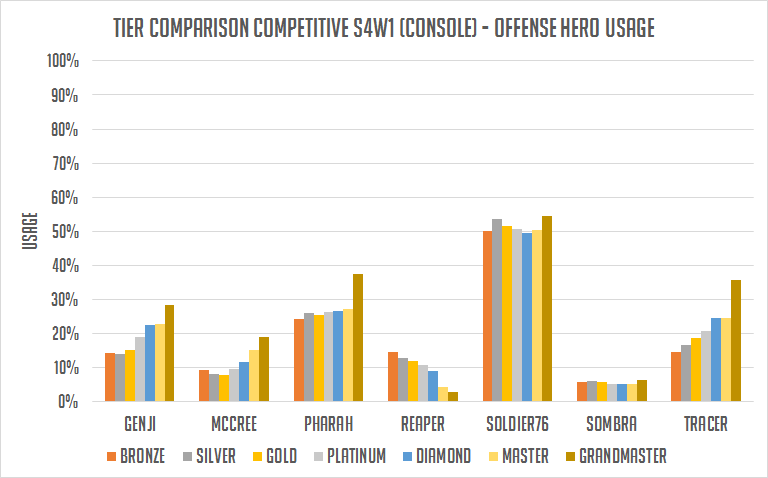 No Offense heroes got a new buff for the start of Season 4. While Soldier is still solidly picked across tiers, the new changes to Bastion have all somewhat lead to Soldier's decline. Genji, Pharah, and Tracer remain solid picks all see increased usage, as Zarya ult combo remain really strong. Note that their usage peaks at the Grandmaster tier, as the data suggests Grandmasters players are bearing the DPS roles while teammates that are Masters more frequently play support heroes.  ayers are preferring Genji and Tracer to Pharah, possibly due to better mobility. Reaper's usage sinks down even further than S3 and is very rarely seen at higher levels of play, as the damage buffs to Roadhog seem to make Roadhog more suitable for dealing damage in situations that Reaper would have traditionally be good at. 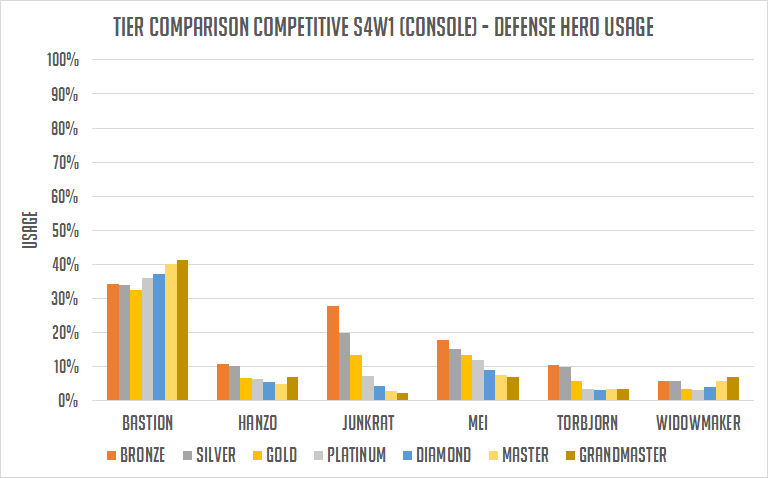 Defense heroes reflect the meta changes, as Bastion surges from near obscurity to be one of the best heroes in the game, stemming from a stronger kit. Recon mode can rival Soldier for accuracy and damage, and sentry mode gets a survivability improvement with the new "Ironclad" passive. One asterisk and note with Bastion usage: while PC did get a patch nerfing the "Ironclad" passive, this patch has not yet hit console. Similar to the drop off in usage I observed on PC, I expect that Bastion's popularity will wan some when the nerf reaches console. Junkrat is still a favorite hero at Bronze and Silver; anecdotally his "cause chaos" playstyle likely still leads to solid success at those tiers. Mei is the only other defense hero that consistently sees over 10% usage rates, likely because of her strength on assault maps and the strength of her ultimate ability. Hanzo, Torb, and Widowmaker continue to be niche picks, with Hanzo and Widowmaker requiring high precision not as easily achieved with a controller. With Torb's turret damage being buffed, we may see an increase in his usage in the future. 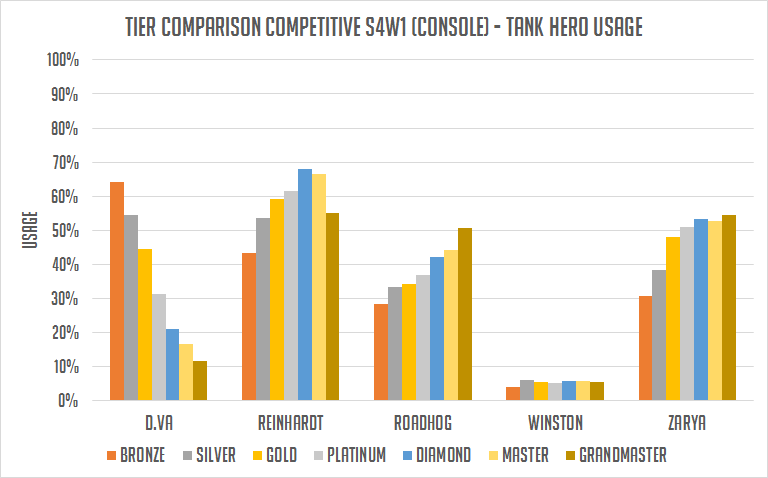 Tanks continue to be a big part of the meta at all tiers of play. Reinhardt continue to be the most popular tank overall, as he continues to be the only real "main" tank in the game and the foundation of most team compositions. With the buffs to Bastion, it has become more common to see Mercy power boosting Bastion behind a Rein Shield. Off tanks continue to vary depending on tier. The nerfs to D.Va have caused her to have a 20% drop in usage versus season 3, with Zarya seeing much more play as a direct result. Zarya's ability as a utility tank is similar to D.Va, trading off mobility for potential damage and a strong ult to combo with many of the offensive heroes. Roadhog continues to be quite strong and a solid pick whose skill cap is appreciated even more at higher tiers of play. Despite the nerfs to his hook, we see little change in usage of Roadhog. Winston continues to be the black sheep of the Tank family (though still picked in Dive team compositions), but with buffs to his shield and other hero changes on the PTR, it is entirely possible we will see his use rate increase in the future. 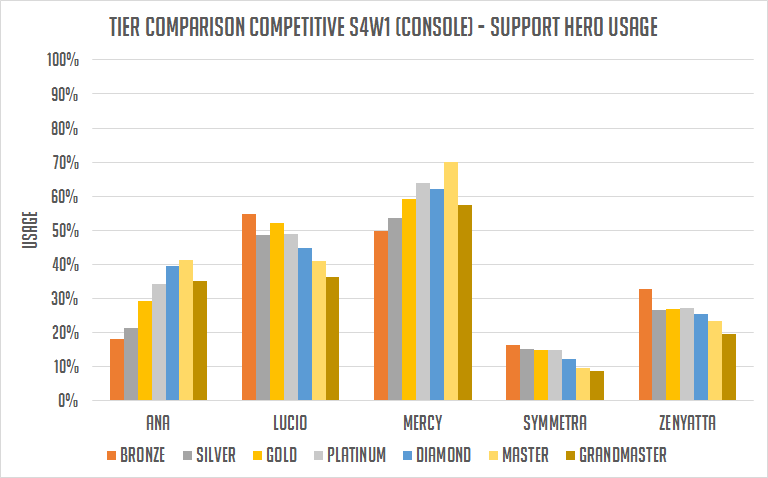 Support usage has changed greatly with the new season. The re-introduction of Bastion into the meta and the buff granting invincibility during ult has lead to a resurgence of Mercy, with a more than 20% increase in average usage rate across all tiers. The biggest loser with the emergence of Mercy is Lucio, who loses his #1 spot. He moves to #2 in support usage, with his healing and speed boost aura continuing to be very strong. Similarly, Zenyatta has lost some popularity but still remains quite strong as discord and healing orbs are quite good. Ana's heavy reliance on accurate shots for healing make her a more difficult pick with a high skill ceiling, as evidenced by her popularity increase across the tiers. Symmetra remains a niche pick despite the rework of her kit. 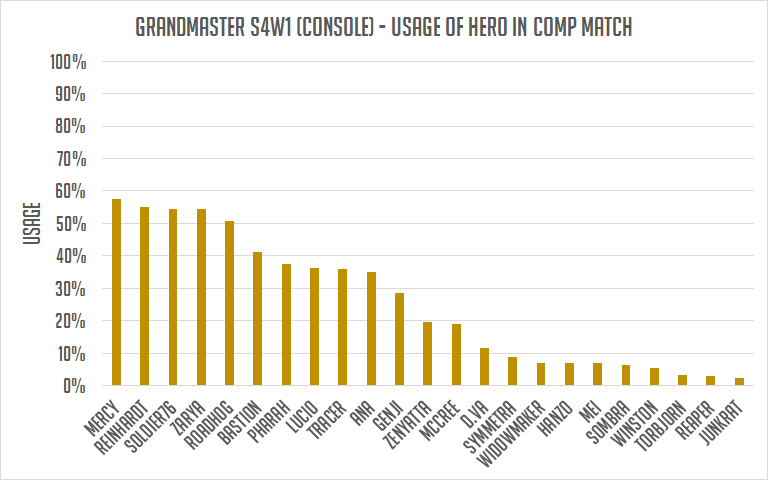 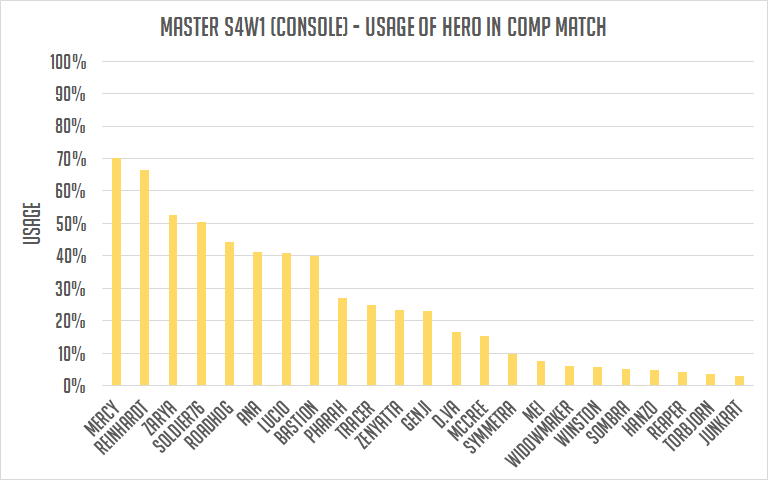 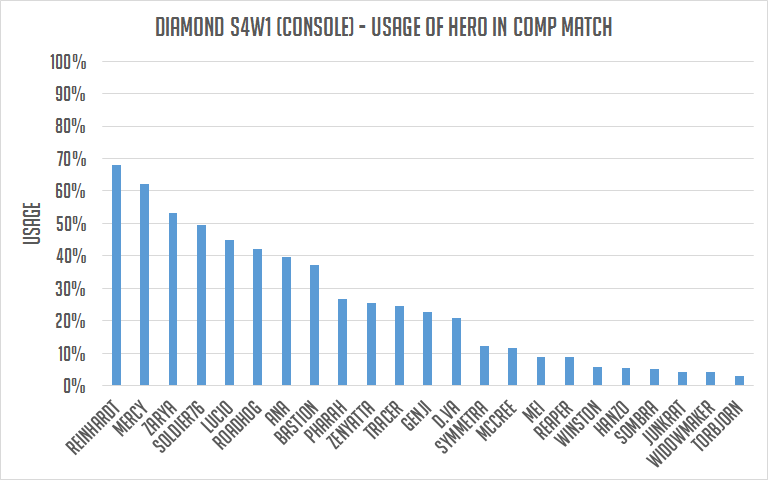 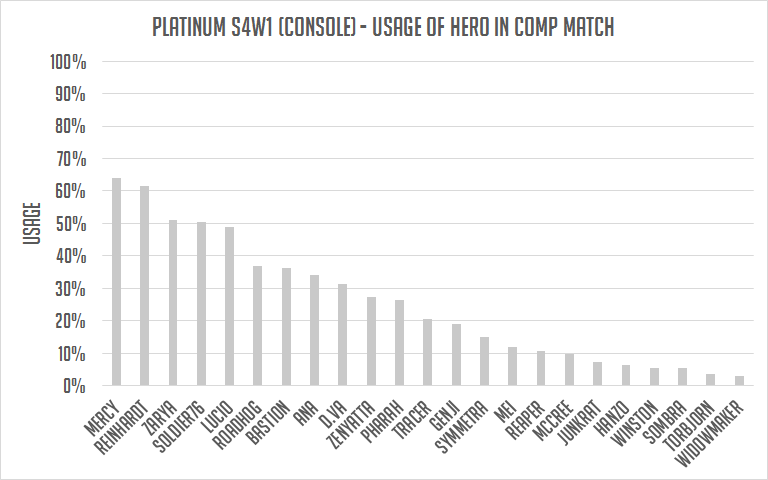 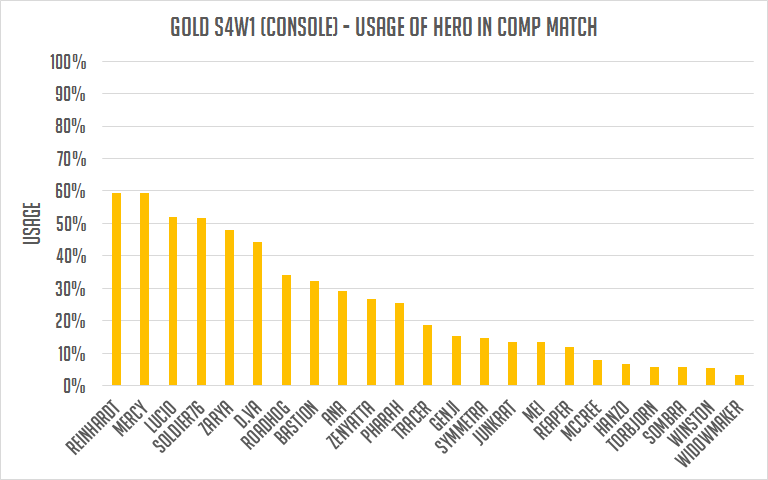 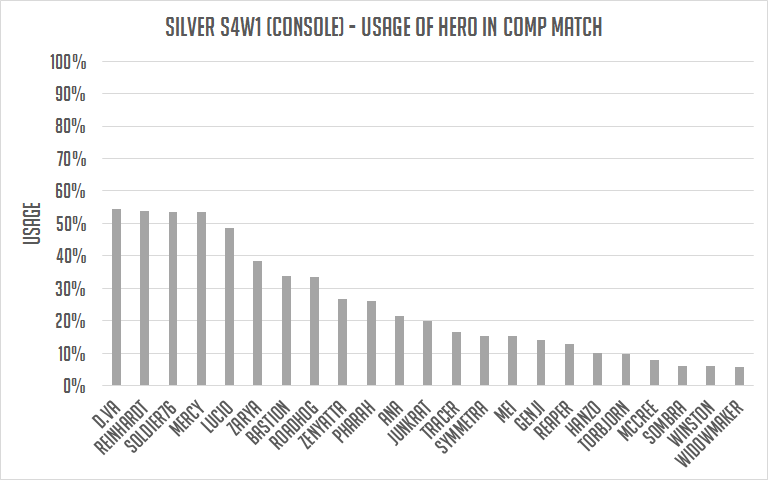 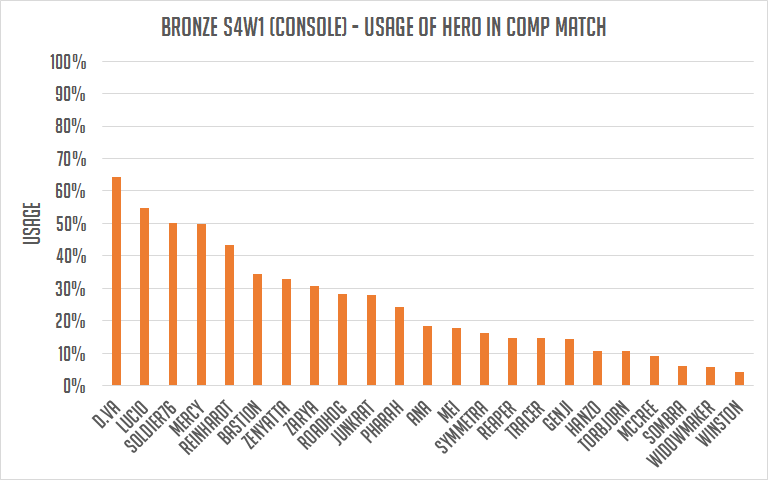