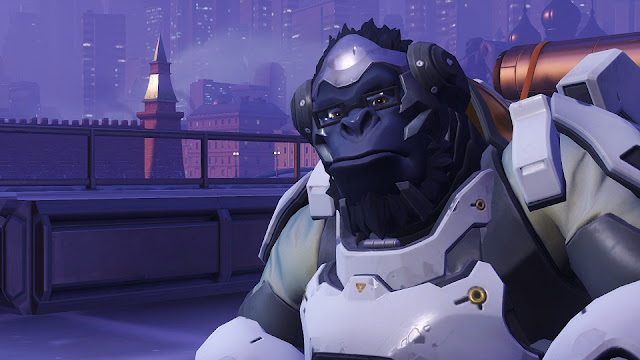 Welcome to a new and improved OmnicMeta Hero Meta Report.  The biggest change is that there is now a hero meta report for each tier. My hope is to give you the players better information on what the current hero meta is for you.  Please let me know what you think, either on Twitter, Facebook, Reddit, or email (omnicmeta@gmail.com) 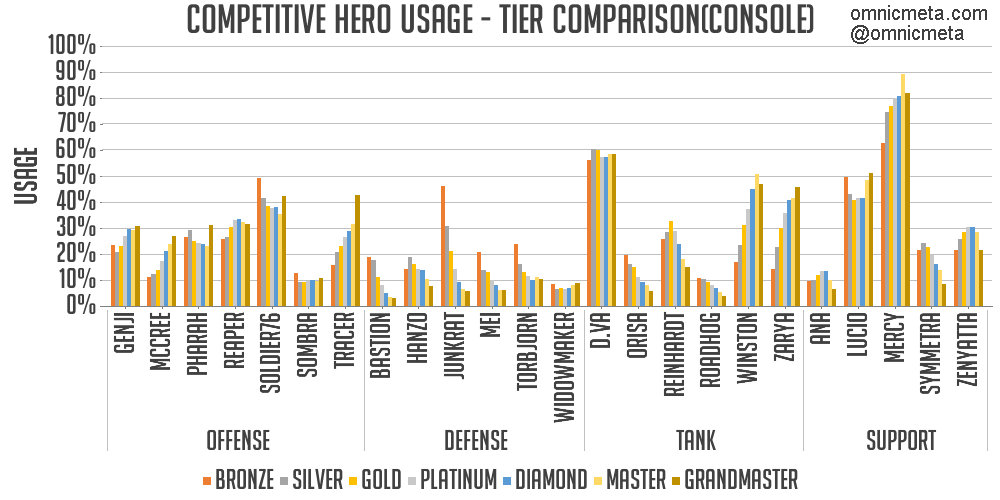 The above chart breaks down average hero usage by tier, grouped by category (Offense, Defense, Tank, Support). Across all tiers of play we continue to see the impact of Patch 1.12, which brought the meta "death" of Roadhog and the surge of Winston and D.Va. Generally speaking, aggressive and dive team compositions continue to grow.  However, compared with recent weeks, the changes this report are not nearly as drastic, indicating a meta that is starting to settle - just in time for Doomfist's release on Thursday (alongside a wealth of other hero changes).  For offensive heroes, the general trend across the tiers has been for more Reaper, and less Pharah and McCree.  Reaper's ability to duel other heroes has been vastly improve by his buff to self healing.  Junkrat is seeing a surge among defense heroes, have seen increased play in 5 of 7 tiers this report.  He is one of the most popular DPS heroes at Bronze, Silver, and Gold. The meta is certainly being defined by D.Va is she is consistently popular across the tiers and much greater in popularity than any other tank.  Reinhardt continues to fall, but is still being played heavily in the lower tiers.  Finally, Mercy continues to be the most popular hero in Console Overwatch, with Lucio being the clear #2 most popular support across tiers.

The infographic above presents the top 2 usage gainers for the competitive tiers.  With more players moving away from Reinhardt and Roadhog, the trend of more Winston and D.Va play continues.  After his grand entrance from buffs to self healing, Reaper is still gaining popularity, although at a lesser rate.  He is up in usage across most tiers, peaking in growth and Gold and Master tiers. Bronze and Silver are the outliers again this report.  Bronze mainstay Junkrat is seeing a surge at Bronze, up 6% in usage, followed by Soldier.  Hanzo's popularity also has risen significantly at Silver, placing him solidly in the meta at that tier.

As far as the top 2 biggest usage losers this report, we see more variation which represents some broad trends.  Reinhardt is the big usage loser, down greatly - especially at the higher tiers.  Formerly the most popular tank, Reinhardt is now.  Similarly, Roadhog continues to fall after his big nerf to his one-shot combo.  Bronze tier continues to be the tier with the biggest changes week to week, as players appear to continue experimenting.  This report McCree has fallen significantly out of favor, with Zenyatta also falling.  Other surprises are significant falls of meta mainstays D.Va at Silver and Mercy at Grandmaster.  Despite the drops, those heroes continue to be meta. 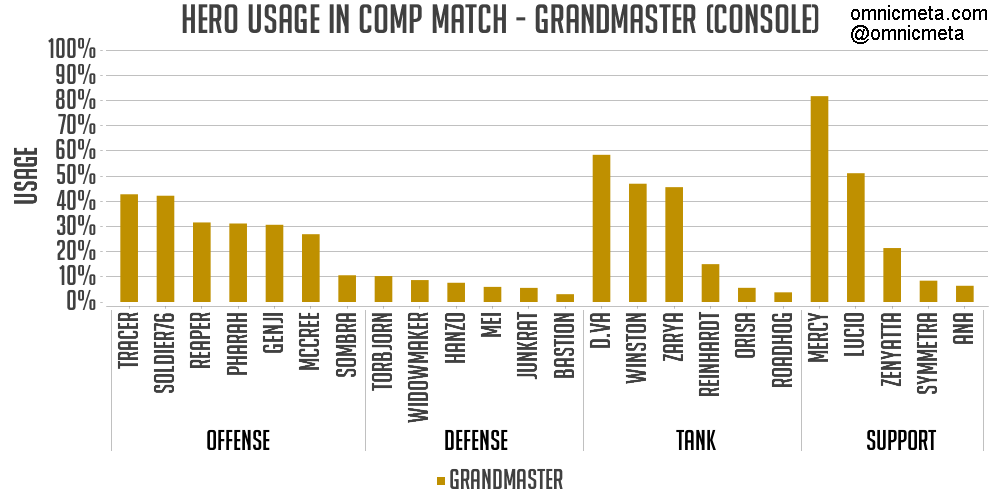 The meta continues to tighten to a select number of heroes in Grandmaster.  Aside from a small 2% usage increase to Reaper, the offense hero remains roughly the same as last report.  There are 6 heroes that are a significant part of the meta: Tracer, Soldier, Reaper, Pharah, Genji, and McCree.  These heroes represent the trend towards dive heroes (Tracer / Genji / Pharah), and also anti-dive (Reaper / McCree).  Continuing the trend around dive team compositions, there are three heroes roughly tied in usage for Tanks.  D.Va, Winston continue to surge in popularity and are the meta-defining heroes for dive, while Zarya's ability to provide protection for flankers and graviton surge combos also let her fit in well.  Zarya's usage ticked up 5% last week - her usage is on the rise.  Supports for Grandmaster are mostly a "choice" of Mercy and Lucio, with Zenyatta still not catching on this season. 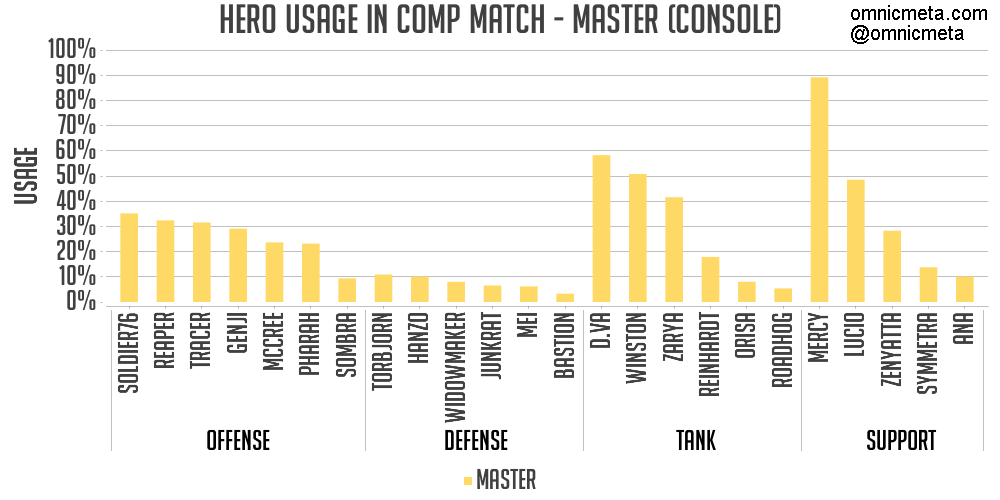 For Master tier, there is more movement in the meta - thought the general trend is towards dive team compositions.  Similar to Grandmaster, there are the same 6 popular DPS heroes (Soldier, Reaper, Tracer, Genji, McCree, and Pharah.  However, this report Reaper is up 5% usage this week, Tracer is up 4% usage, and Pharah is down 3% usage.  In future weeks, we may see Tracer and Reaper solidify there position in the meta, and Pharah may continue to drop out at Master tier.  For Tanks, D.Va and Winston continue to be the story, growing in usage and slowly becoming the preferred picks for the category.  Zarya remains stable in usage this week, and is clearly a huge part of the Master meta.  For supports, Mercy is almost a given in each competitive match (89% usage), with the second support slot given to either Lucio or Zenyatta. 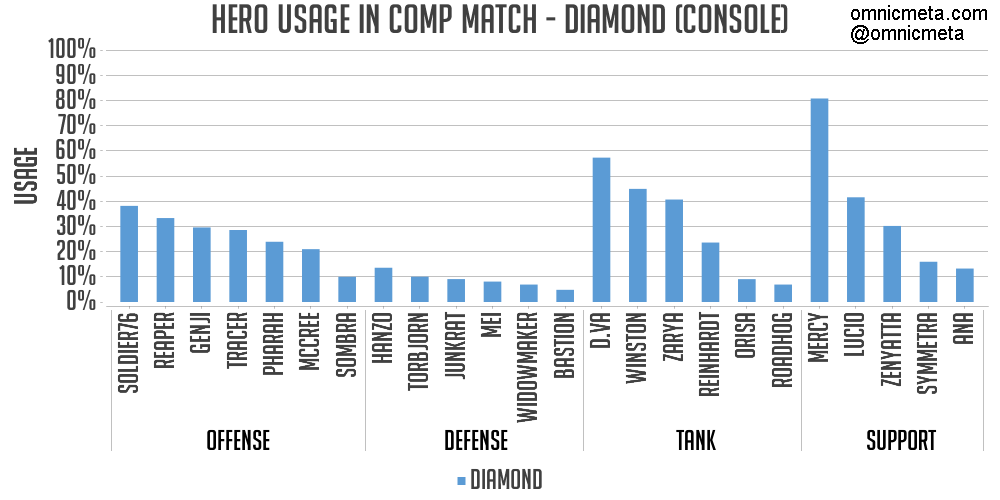 Diamond tier is experiencing similar dive hero trends to Master tier, with a few exceptions.  Currently Soldier is clearly the most popular offensive hero, follow by the other five meta heroes (Reaper, Genji, Tracer, Pharah, and McCree).  Reaper is up 2% usage, while McCree and Pharah are both down 3% this report, and appear to be slowly falling out of the meta.  Time will tell if that trend continues.  Tank play is being defined by the rise of D.Va and Winston, with Zarya maintaining her high usage.  Reinhardt is a second tier Tank in Diamond currently, as he is being pick a significant amount, but is substantially less popular than the "big 3".  For supports, Mercy and Lucio continue to be the two most popular picks.  However, Zenyatta usage grew by 3% since the last report, placing him firmly in the meta. 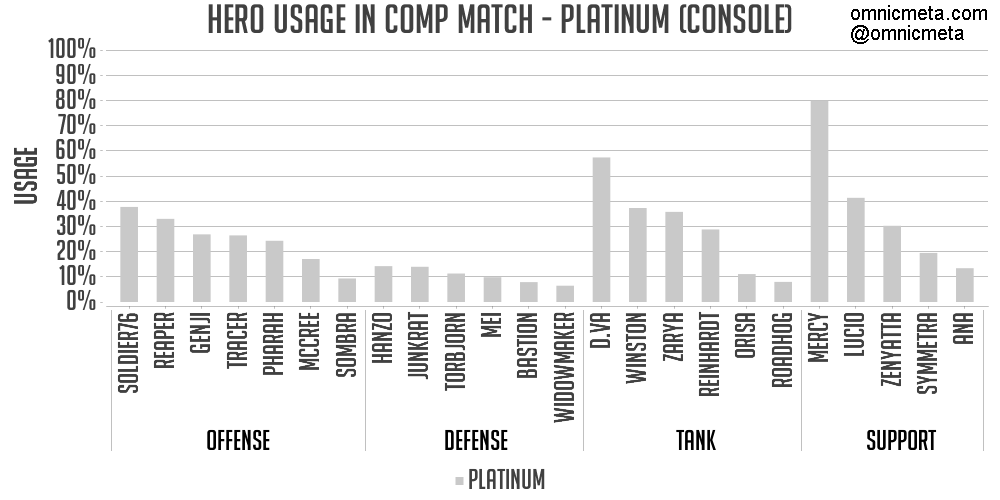 For Offensive heroes, Soldier remains the most popular Offense hero, with Reaper close behind and rising in usage.  Dive heroes Genji, Tracer, and Pharah round off the list as a 2nd tier of DPS heroes currently being played.  McCree is also being played significantly, but not nearly as much as the other 5 popular heroes.  Similar to other tiers, both Pharah (-2%) and McCree (-2%) fell in popularity - a trend that may continue in the future.  For Tanks, D.Va is the clear #1 pick ahead of the other tanks, as Winston is also slowly becoming a more important part of the meta.  Winston's 5% increase in usage has moved him ahead of both Reinhardt and Zarya this report.  Reinhardt is still a big part of the meta in Platinum, although he lost another 5% usage this week and continues to trend downwards.  Support play is also more varied, as both Lucio (+2%) and Zenyatta (+2%) are up this week, taking a small chunk of play from the incredibly popular (and nearly ever-present) Mercy (-2%).  With 19% usage, Symmetra is also a part of the current support meta, and is mostly likely being played to deal with the increased number of flankers. 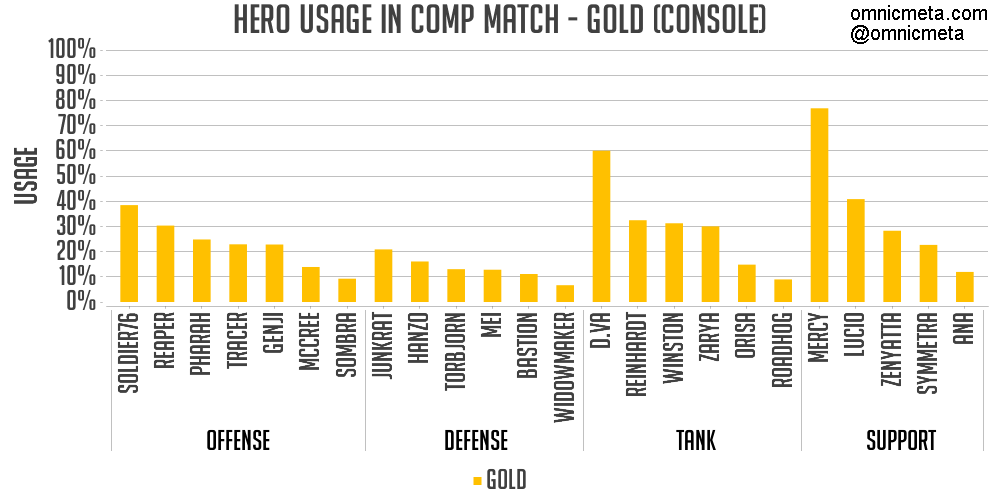 The hero meta in Gold is much less defined that the higher tiers.  For offensive heroes, Soldier stands out as the most popular pick, followed by a rising Reaper (+2%).  After those two heroes however, there is the collection of dive heroes sitting a tier below (Pharah, Tracer, and Genji).  Most notable is that Gold is also the first tier where a defensive hero is a big part of the current meta.  Junkrat is the #6 most popular DPS hero, being played at 21% usage rate as he is up +3% in usage this report.  D.Va remains the most popular tank by far, with Reinhardt (-3%), Winston (+3%), and Zarya (-2%) a tier below in popularity.  Similar to other tiers, Winston's star is rising as dive gains traction as a team composition.  Support play doesn't experience any substantial changes this report, with Mercy being the "must pick", followed by Lucio and Zenyatta.  Symmetra is also seeing significant play as one of the more popular heroes at Gold. 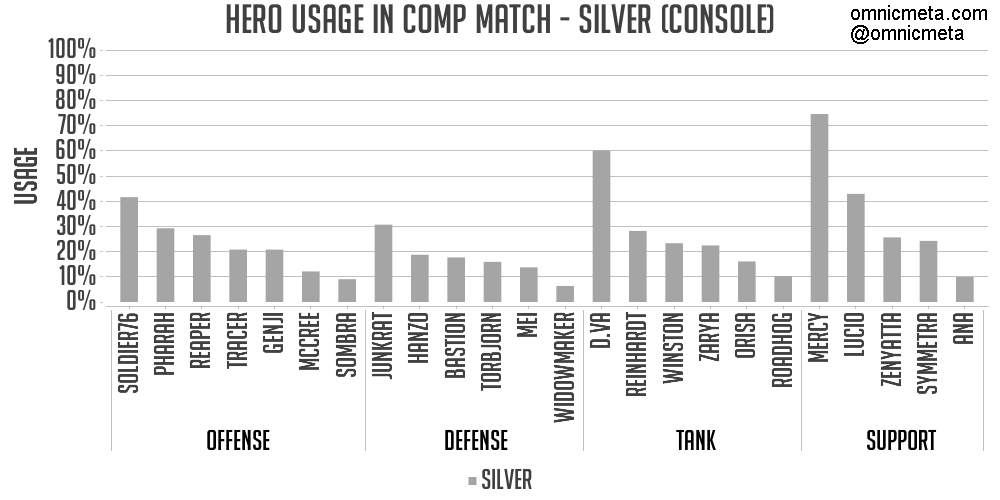 In Silver tier, the hero meta is dominated by a few popular heroes and a large number of semi-popular ones.  Dive heroes remain somewhat popular in Silver, though it appears that other 2-2-2 compositions are the dominant team compositions being played.  9 DPS heroes make the tier list this report, representing the diverse meta at that category.  Soldier (42% usage) is the most popular DPS hero, followed by another 3 popular heroes Junkrat, Pharah, and Reaper.  Like all the tiers, D.Va is currently the most popular tank in Silver by a large margin.  For other tanks, Winston (+3%) and Reinhardt (-3%) are the big movers this week, while Zarya's popularity remains stable.  Mercy continues to be the most popular support hero, followed by Lucio.  Mercy (+2%), Lucio (+2%), and Zenyatta (+2%) all saw increased play this week. 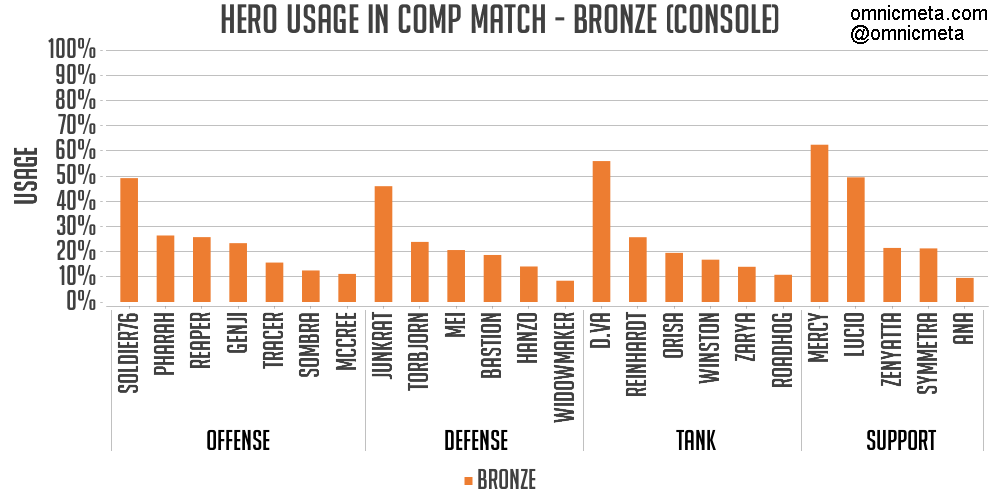 The Bronze hero meta continues to shift rapidly, though is still roughly following a traditional "2-2-2" team composition.  In general, dive team compositions don't appear to be popular at all (at least dive heroes are not popular).  The two most popular DPS by a wide margin are Soldier (+5%) and Junkrat (+6%), more that 20% more popular than any other single DPS hero.  After those two heroes, 3 Offense (Pharah, Reaper, Genji) and 3 Defense (Torbjorn, Mei, Bastion) are a tier below, but seeing significant play.  In general, Tank play has been stable since last report, with only Winston (+3%) seeing a big change in play.  After #1 most popular pick D.Va, all other tanks are two tiers below.  Anchor tanks Reinhardt and Orisa are seeing usage above 20%.  For support, Mercy (+4%) and Lucio (+2%) are much more popular than the other supports, and significantly gain this week.  Zenyatta (-4%) is one of the biggest popularity losers in Bronze.