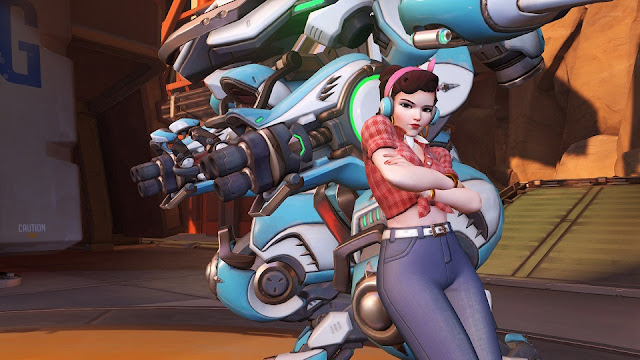 Season 5 has so far been a season of intense meta shift towards aggressive and dive-friendly heroes.  That trend continues this report, with big changes in hero usage continues to stem from the recent Overwatch patch.

The main trends:
The impacts of Patch 1.12 continue, as Roadhog's usage has completely crashed.  He is now in the bottom 5 and one of the least played heroes in Overwatch.  With his demise, D.Va and Winston have stepped up to take his place.  Reaper is now a solid meta pick, contesting with other prominent heroes for the #2 most popular Offensive hero.  Surprisingly, defensive heroes are on the rise in Bronze tier, with longtime favorite Junkrat getting a big usage boost - making him one of the most popular heroes overall.  Finally, Mercy continues to exert her dominance in the support category.

What this report is: A meta report and tier lists for hero usage and trends across competitive Overwatch (Grandmaster -> Bronze), representing data from two weeks of S5.
What this report is not: We do not report any data from professional or Esports tournaments.
For information on our data, see the About page.

The infographic above presents the top 2 usage gainers for the competitive tiers. Generally speaking the trends from last report continue.  Reaper is the biggest gainer across the majority of the tiers, up an average of 11% across the tiers.  His self-healing change has been major in helping his survivability.  He peaks with an eye-popping 18% gain in Grandmaster, the tier that has played him the least traditionally.  Winston and D.Va continue to gain, both up an average of 10% across the tiers.  Heroes that fit in well with agressive and dive team compositions are incredibly popular right now. Besides Reaper, Winston, and D.Va no other heroes gain majorly on average across the tiers.  Bronze tier is a special mention, as Defense hero popularity grew in the past two weeks, including Torbjorn and Junkrat increasing 6% in usage.

As far as the top 2 biggest usage losers this report, the big headliner is the recently nerfed Roadhog.  No longer able to one-shot heroes or deal burst damage as consistently, he has completely fallen out of the meta.  He is down an average of 25% usage across the tiers and is one of the least played heroes.  Reinhardt and Soldier continue to fall, though slightly - both heroes are down 5% usage on average.  Soldier is definitely still a major part of the current meta, while Reinhardt is taking a smaller role as a less popular hero. 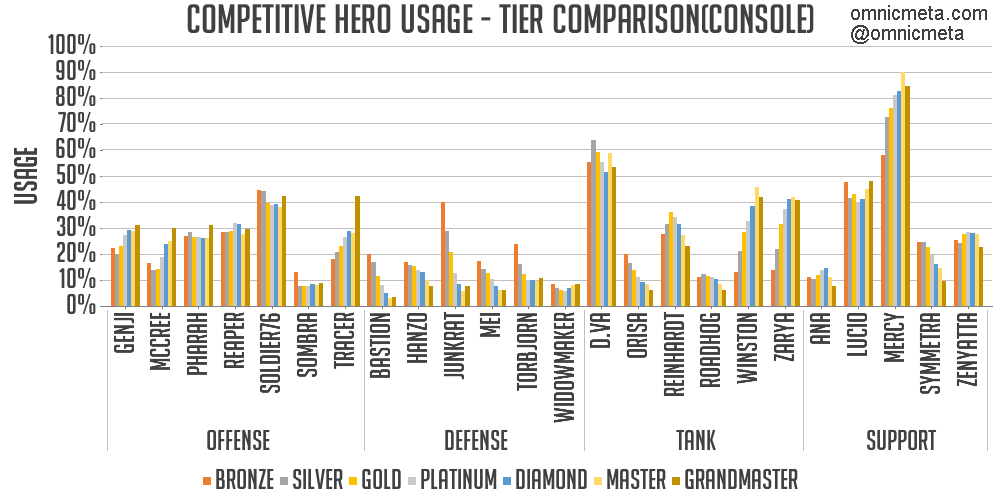 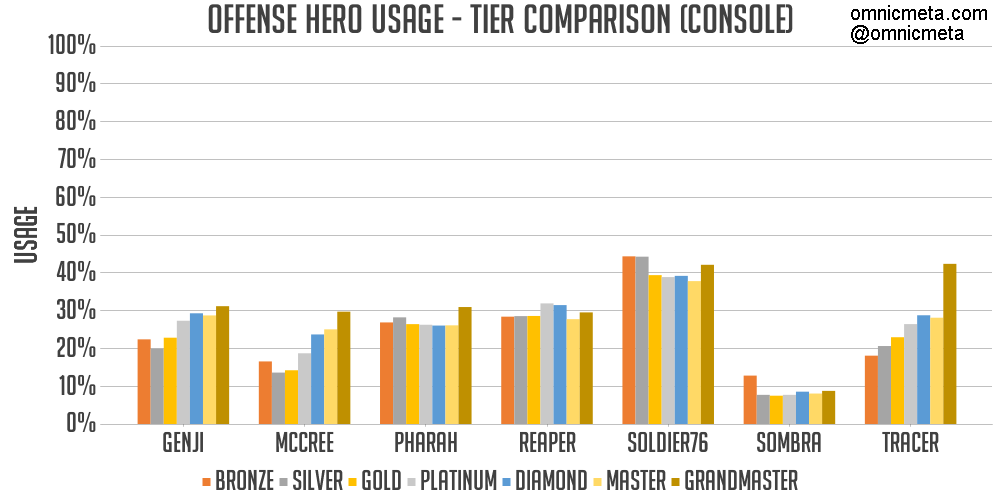 Offense hero play is the most diver we have seen on console.  Soldier remains the most popular hero across the tiers with his all-around kit of near-far damage, healing, and sprint.  The competition for the #2 spot is much less clear, with Genji, Pharah, Reaper, and Tracer competing for the spot.  All four of those heroes are in the 20%-30% usage range across the tiers (exception: Tracer is #1 at Grandmaster).  Reaper has seen such a big boost, particularly at Master and Grandmaster.  His ability to help deal with the increasing number of D.Vas and Winstons has been greatly improved with the recent buffs to his self healing.  Genji and Tracer fit in well into aggressive and dive team compositions, as they have high mobility, while Pharah still pairs with Mercy incredibly well.  McCree's usage has ticked up a bit since last report (3% on average) , with the renewed interest likely due to buffs to his ultimate.  With Reaper now a part of the meta, Sombra is the only remaining offense hero that is not seeing significant play. 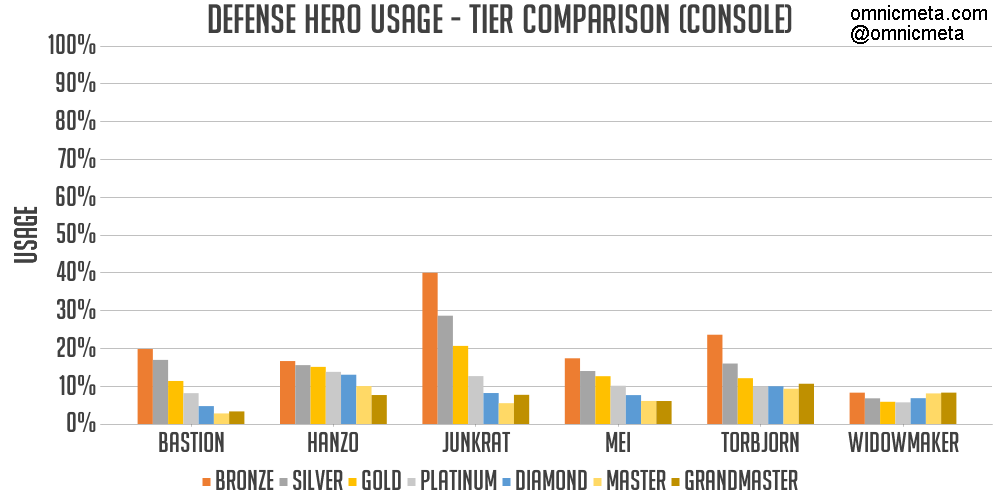 Defensive heroes remain a collection of heroes considered niche for competitive play.  Hero usage remains mostly the same as last report, with the exception of Bronze tier.  Bronze tier has seen a 14% increase in Defensive hero play, with Junkrat and Torbjorn leading the way (+6% for both heroes).  There are now 1.25 Defense heroes per team in a competitive match, nearly 3x higher usage than most other tiers.  Overall, the most significant hero usage is Junkrat (Bronze - 40%, Silver 29%, Gold 21%), Torbjorn (24% Bronze), and Bastion (20% Bronze).  Other defensive heroes, such as Hanzo, Mei, and Widowmaker remain niche picks. 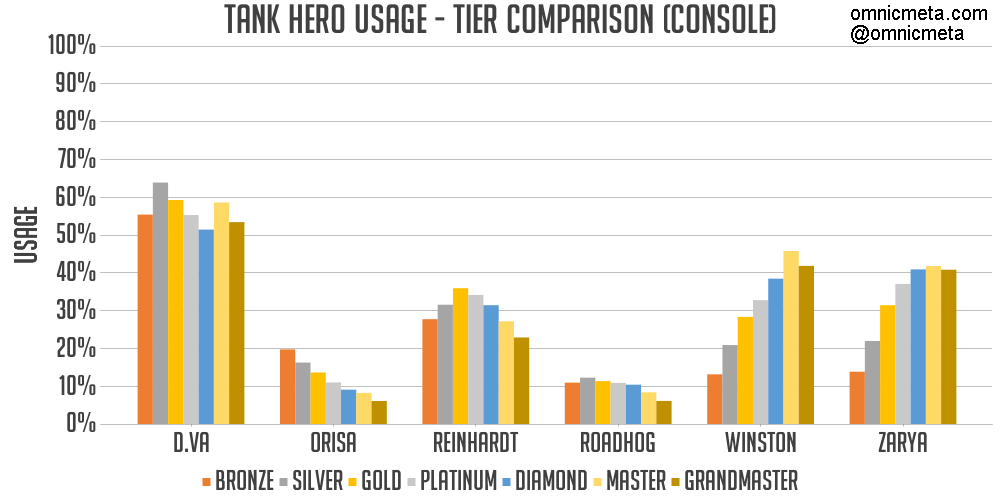 D.Va and Winston continue to headline the meta shakeups among Tank heroes.  Since the end of Season 4 the two heroes have been gaining, moving from the lesser played Tanks to the most played.  Their rise at middle to high tiers is most striking, as Winston has jumped about 25% usage and D.Va nearly 30%.  As a result, D.Va is the 2nd most popular hero on Console Overwatch (behind Mercy).  At the same time, Roadhog and Reinhardt continue to fall. The big patch nerfing Roadhog's one-shot combo has resulted in him completely falling out of the meta, and has made him become one of the least played heroes across all tiers.  Reinhardt's continued fall may partly be due to many reported time-delay bugs affecting his abilities, and partly due to a shift to a faster meta where is he is less viable.  Whatever the reason, the former #1 tank choice Reinhardt has taken a backseat to other heroes.  Zarya's usage remains strong, as her ultimate and projected barrier synergize well with many popular offense heroes.  Finally, Orisa's popularity remains very niche at most tiers. 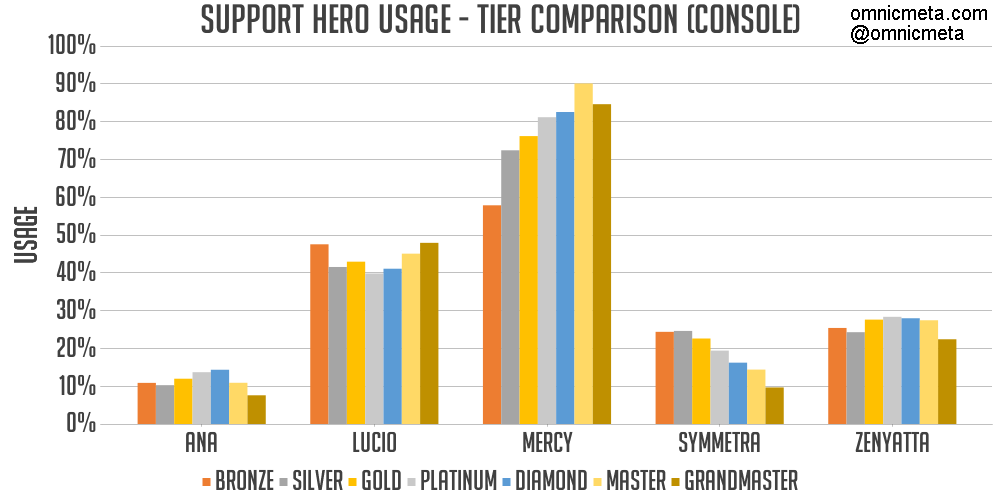 Support hero usage remains similar to the prior report, with few exceptions.  Mercy remains one of the most popular heroes in Overwatch and far and above other supports in terms of usage.  She is up in usage in Silver and Gold, 5% and 4% respectively.  The only other support hero seeing significant movement this report is Symmetra, who is seeing increased usage of 5% at Bronze and 3% at Silver - most likely due to the increase in flankers in Overwatch. Lucio remains the clear #2 most popular support, with near 50% usage across all tiers.  Similar to Mercy, he is a versatile hero that fits into most team compositions.  Zenyatta remains semi-popular, though less popular than on PC.  He is a key part of recent popular dive team compositions, with discord orb being especially powerful.  It will be interesting to see in future weeks if he sees an uptick in usage.  Finally, Ana continues to be the least picked support and one of the least picked heroes in the game. 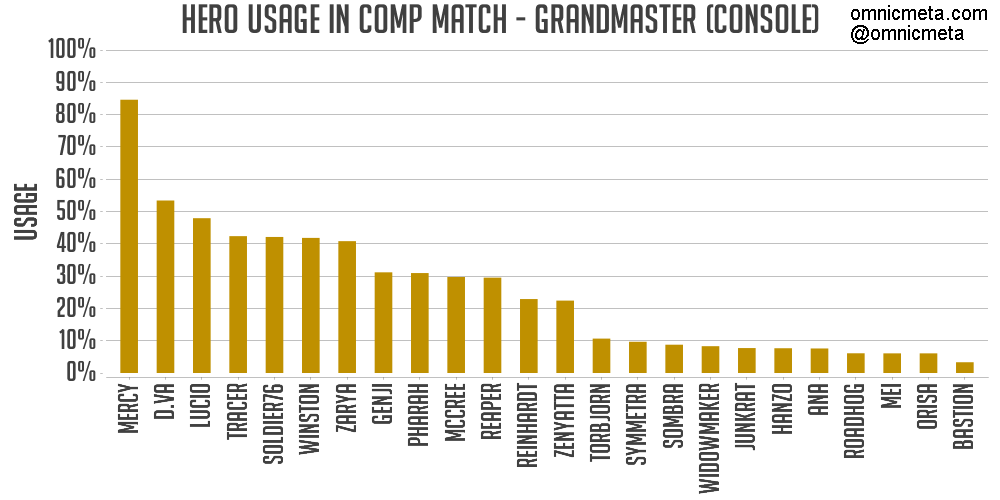 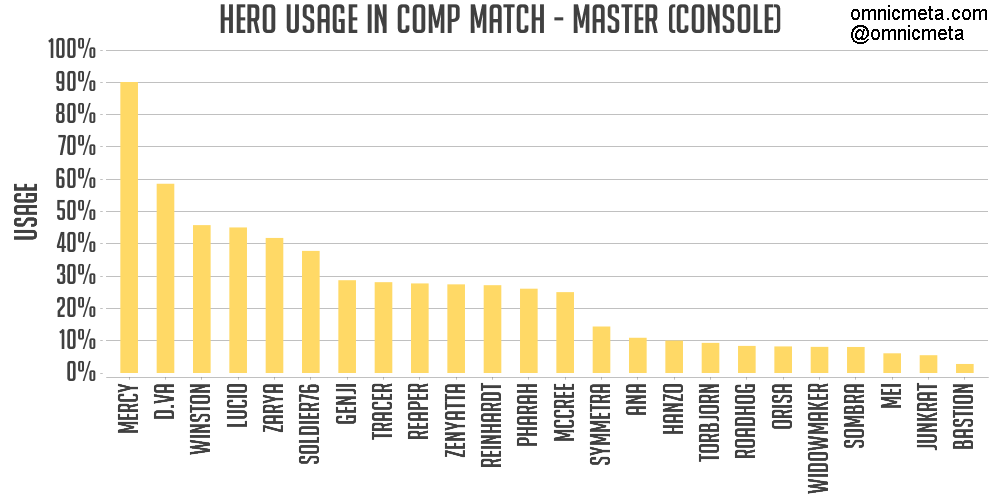 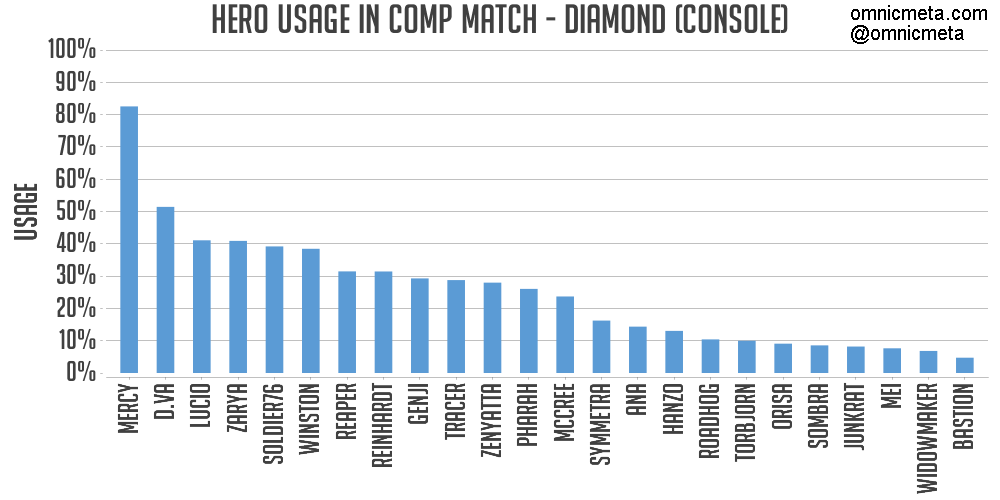 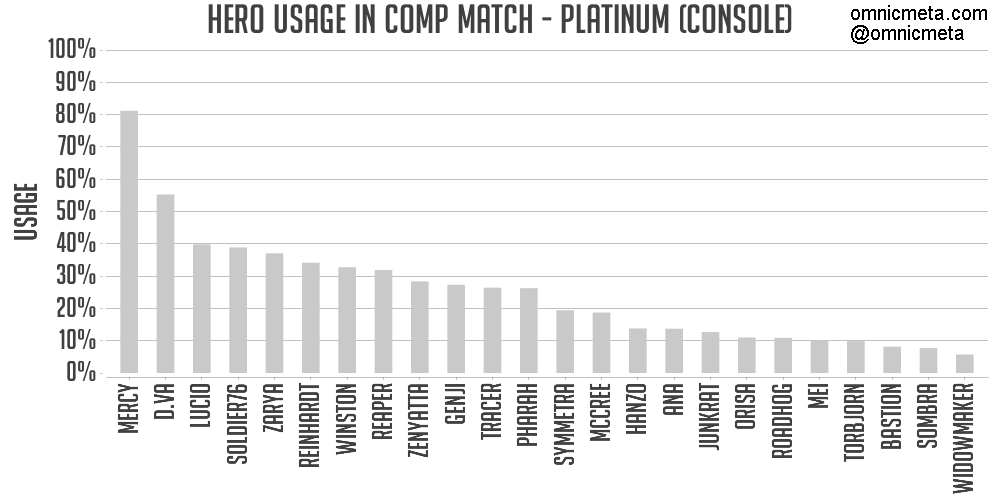 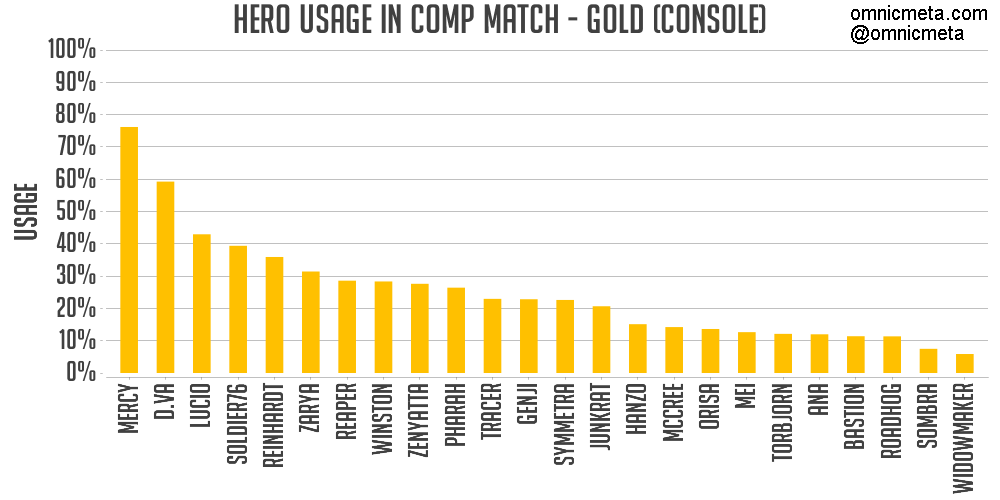 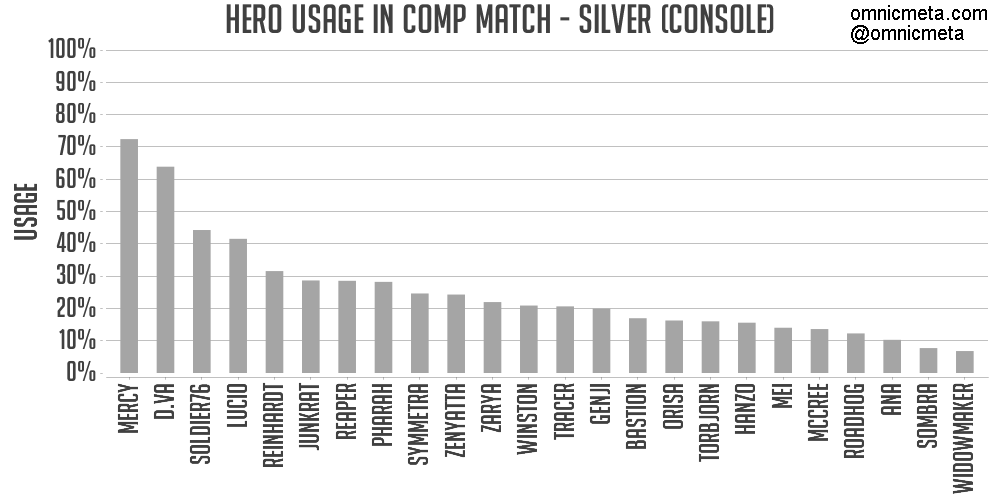 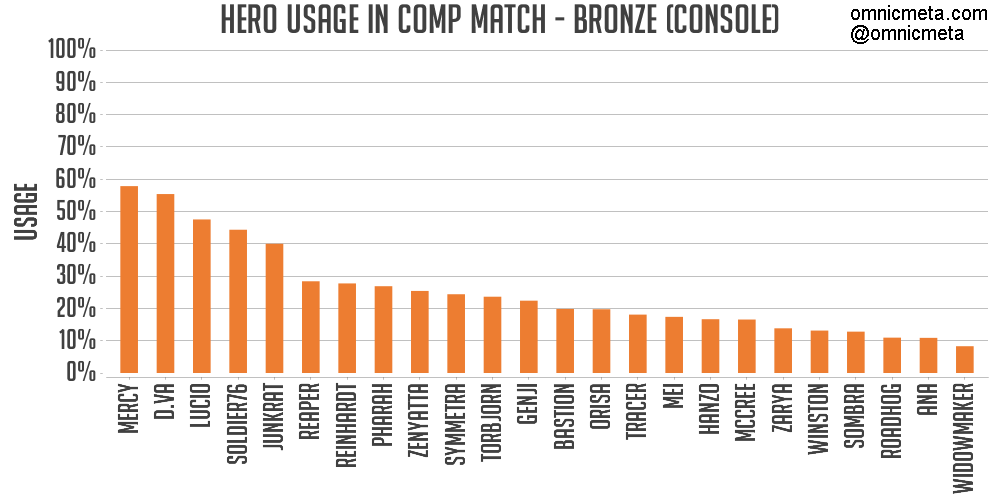