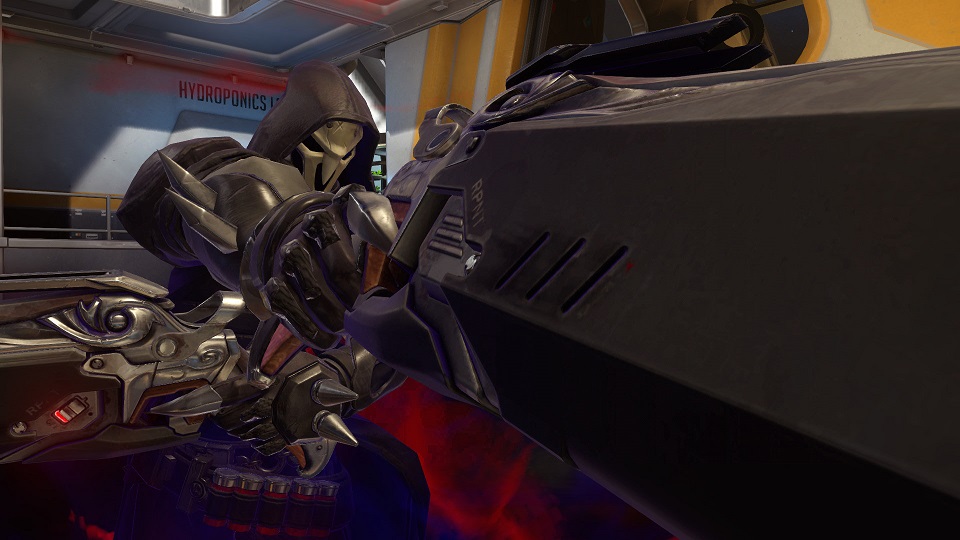 "With new patches come new meta shakeups". The hero meta is Season 5 is already different than in Season 4, and the recently released patch has only continued the trend.  Aggressive and dive team compositions continue to be on the rise.

The main trends:
Patch 1.12 made huge changes to several heroes, and we are already seeing the effects in the meta.  After major weapon changes, Roadhog's popularity is down and Reaper's usage has greatly increased with changes to self healing - and ends his status as a niche and unpopular hero.  In general, dive team compositions continue to push the "old" tank meta out, and D.Va and Winston are replacing Reinhardt and Roadhog. McCree's buffs have him being played more, while Soldier continues to lose popularity in the face of increased competition.  Finally, Mercy's rise in popularity has almost reached a head - she is now approaching 100% usage at higher tiers and is in nearly every competitive match in those tiers.


What this report is: A report and tier lists for Overwatch hero usage and trends across competitive ladder (Grandmaster -> Bronze), representing data from two weeks of S5. Note that this means that less than half of the data represents hero play under the new patch.
What this report is not: We do not report any data from professional or Esports tournaments.

The infographic above presents the top 2 usage gainers for the competitive tiers. The big usage gainers this week vary depending on the tier, but several trends emerge.  Reaper is the big winner this week, climbing up on average of 7% across the tiers after his major self-healing change.  Already-popular hero D.Va also gains greatly at middle and high tiers, with usage increases at 9% and 11% at Diamond and Master.  Together with Winston, D.Va is a staple hero in dive team compositions, which are on the rise for console.  Other notables are Genji and Pharah at Bronze and Silver, generally more volatile tiers on console when it comes to hero popularity.

As far as the top 2 biggest usage losers this report, the big headliner continues to be Reinhardt.  Whether his continued drop is really due to a changing meta or due to nerfs and bugs is unclear.  Either way, Reinhardt is down 18% match usage on average since the beginning of the season.  Roadhog is the other major loser this report.  The big change to Roadhog's weapon (decreased damage, increased fire rate and clip size) largely has been seen as a nerf to his hook combo, and its clear that players don't like the changes.  The dislike peaks in Master and Grandmaster, where he is down 12% and 14% respectively.  The D.Va and Zenyatta drop at Bronze and Silver, despite being key parts of dive team compositions. 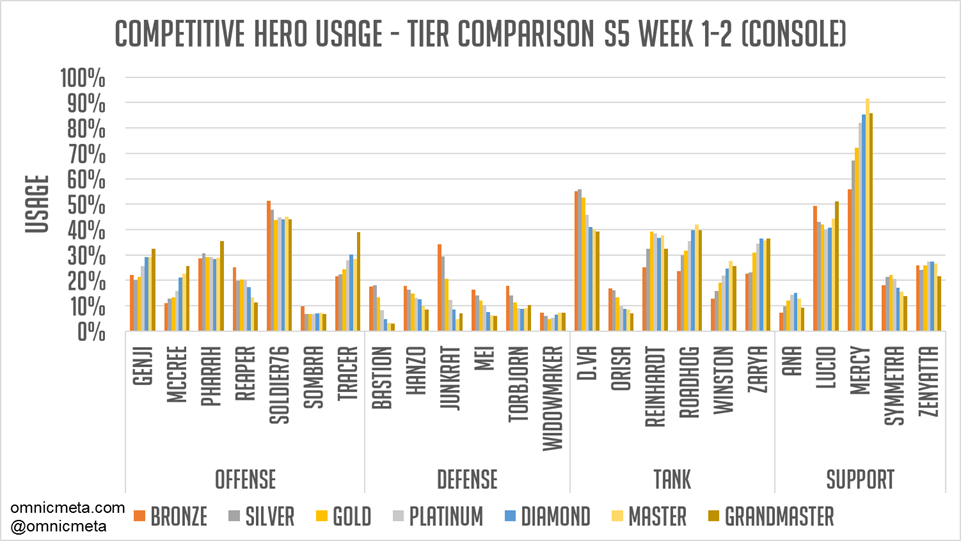 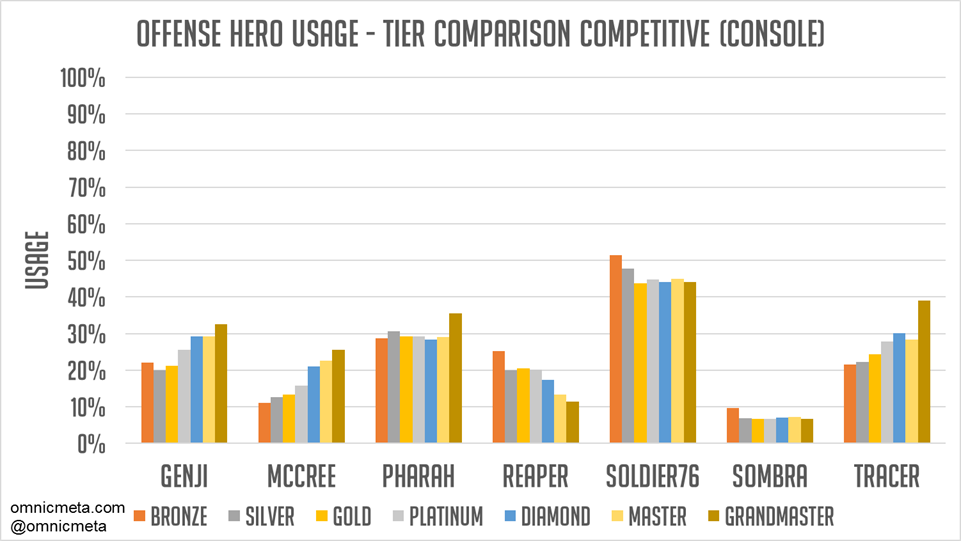 Offense heroes see big changes again this report. Soldier is still the most popular offense hero at all tiers, but is down 4% on average this week across the tiers.  The big story is Reaper's rise after the changes to his self healing.  He makes the Tier 4 cutoff at most tiers, though is still less popular at Master and Grandmaster Tiers.  Both Genji and McCree have also increased in popularity this report, with Genji increasing 3% on average and McCree also increasing 3%.  The rise in McCree may be a result of both his ultimate ability buff, and the rise in flanking heroes like Genji and Tracer.  Pharah and Tracer continues to be a very popular hero following her usage gains last report, and strong in the increasing prevalent dive team compositions.  With Reaper rising in usage, Sombra is the only remaining offense hero that is unpopular in the current meta. Defensive heroes remain a collection of heroes considered niche for competitive play.  Hero usage remains mostly the same as last report, with the exception of Bastion, Junkrat, and Torbjorn getting small bumps at Silver and Gold tiers.  Hanzo retains his usage increase, and is the second most popular defense hero (behind Junkrat).  Otherwise, Bronze tier continues to be the tier where defensive heroes are most used. Bastion (18%), Hanzo (18%), Junkrat (34%),  Torbjorn (18%), and Mei (16%) all make the tier list cutoffs. 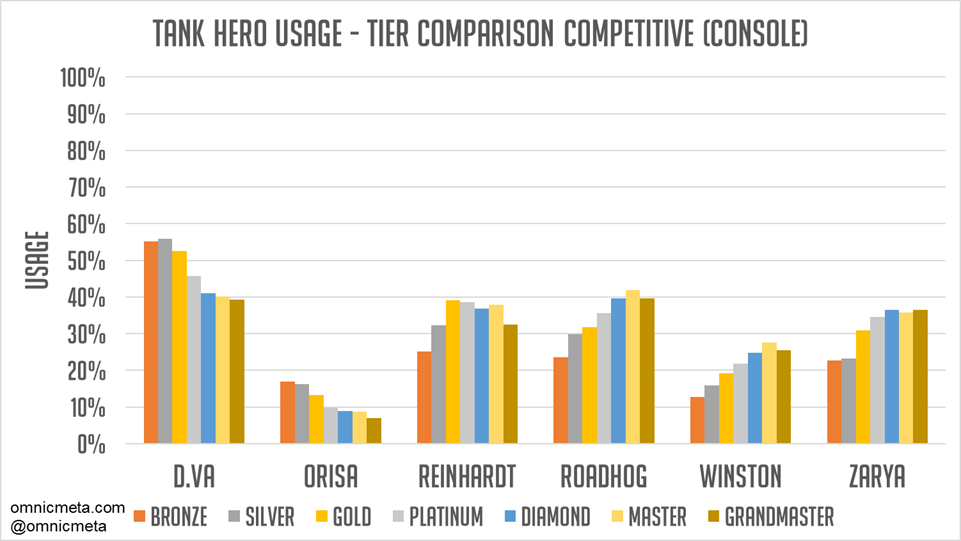 Tank play continues to evolve, with the team composition meta shifting and patch changes hitting the live servers.  Dive team composition staples D.Va and Winston are up big again this report, up another 4% apiece across the tiers.  Diamond -> Grandmaster tiers are especially seeing more of those heroes being played.  Reinhardt continues his decent, now sub 40% usage across all the tiers.  The weapon nerfs to Roadhog have also hit hard, as he drops greatly in every tier.  His hook combo simply doesn't have the impact it used to - it will be interesting to see if his popularity continues to wane in the future.  As a result of Reinhardt and Roadhog falling, D.Va is now the clear #1 tank on console in terms of popularity.  Zarya maintains her popularity, as her projected barriers and ultimate are still really strong given all the squishy heroes being played (Genji, Pharah, Tracer, Mercy, etc).  Finally, Orisa's popularity remains very niche at most tiers. 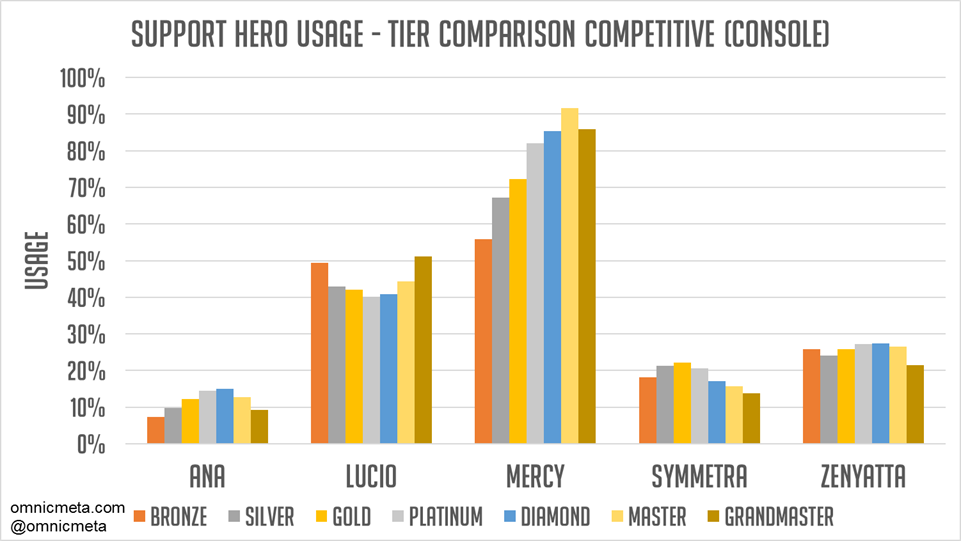 Support hero usage remains similar to the prior report, with few exceptions.  Mercy has continued to increase in popularity, and is now approaching 100% usage in several tiers - she is so strong she is being played nearly every match.  She gains another 3% usage on average this report, and gains the most in the higher tiers.  Lucio usage has appeared to stabilize, as his synergy as aggressive team compositions may be helping keep his popularity.  Suprisingly, despite the rise and dominance of dive heroes Zenyatta actually declines this report - down 2% on average across the tiers.  This could be due to a number of factors, but likely is due to Lucio / Mercy being the preferred support combination at the moment.  Symmetra continues to maintain her position as a niche support hero, with her ability to deal with highly mobile flankers a clear positive in the current meta.  Finally, Ana usage continues to drop following the nerfs at the beginning of Season 3, as she continues to solidify herself as the least popular support hero on console and a niche pick. 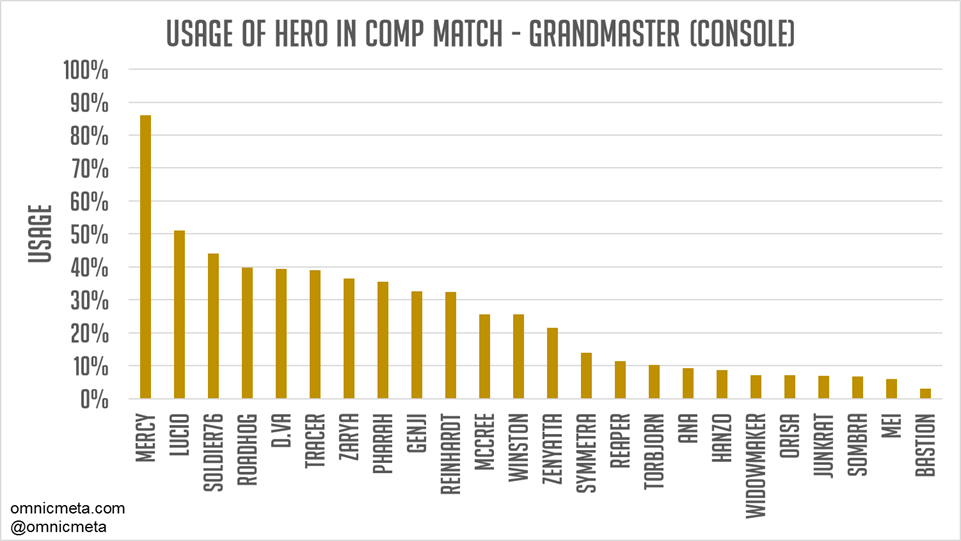 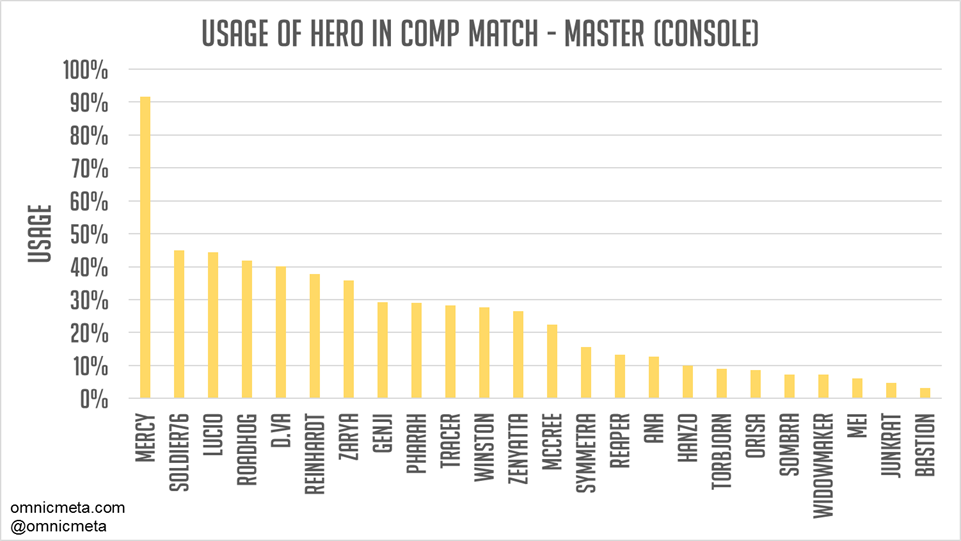 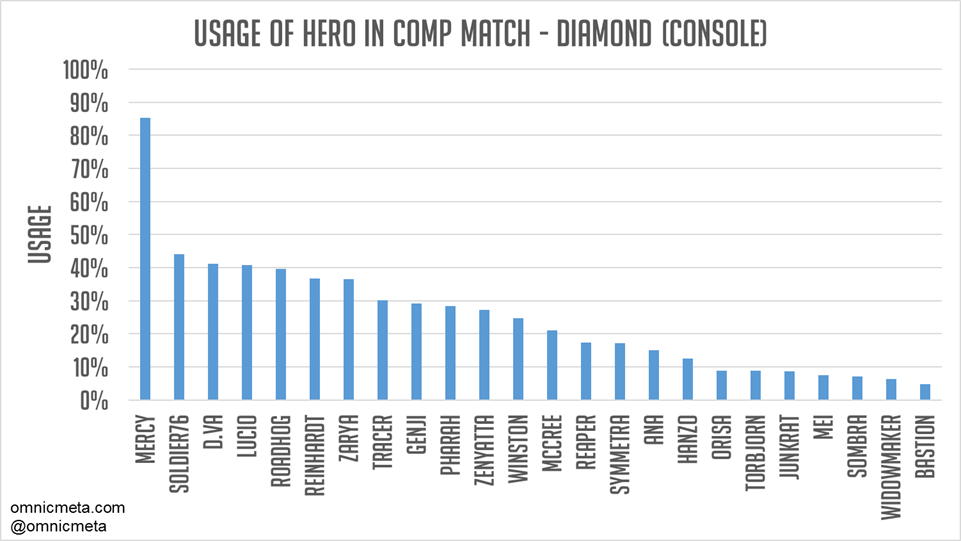 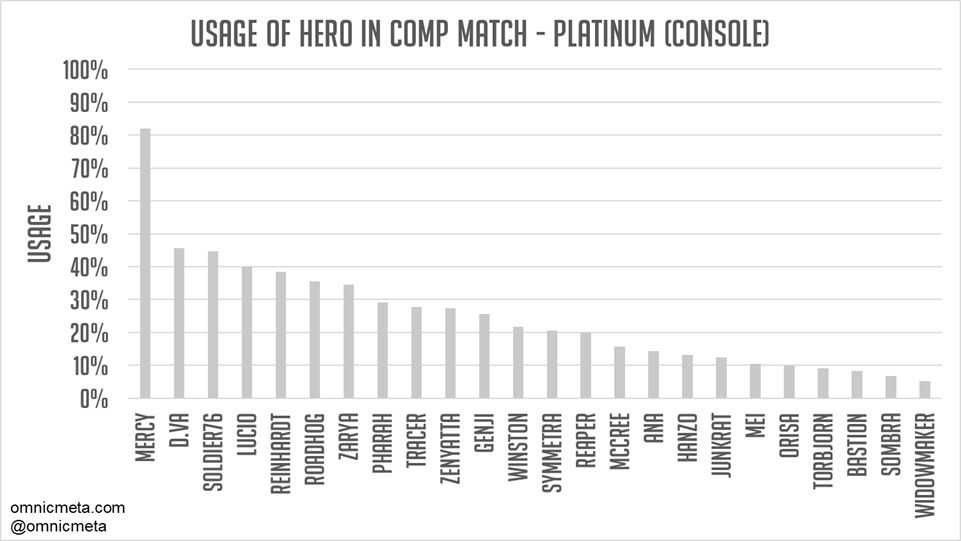 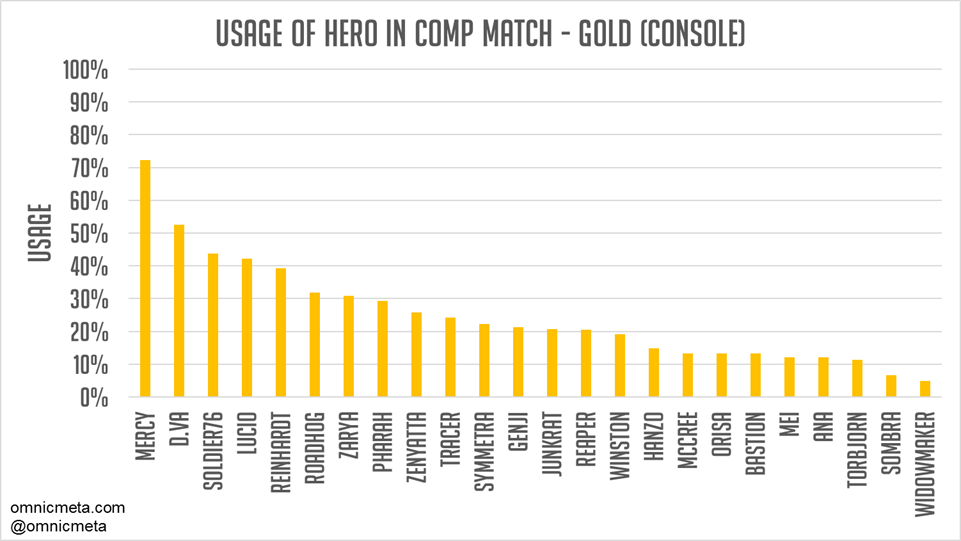 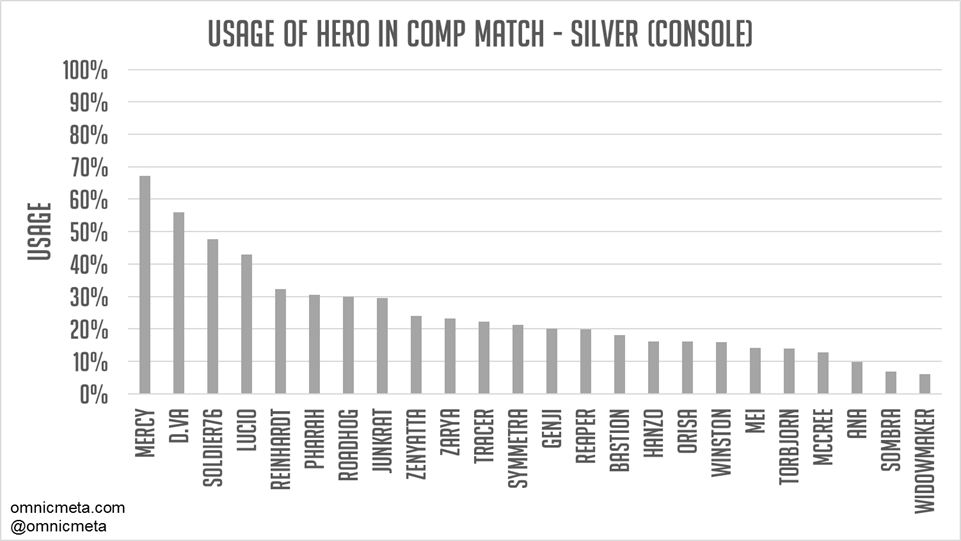 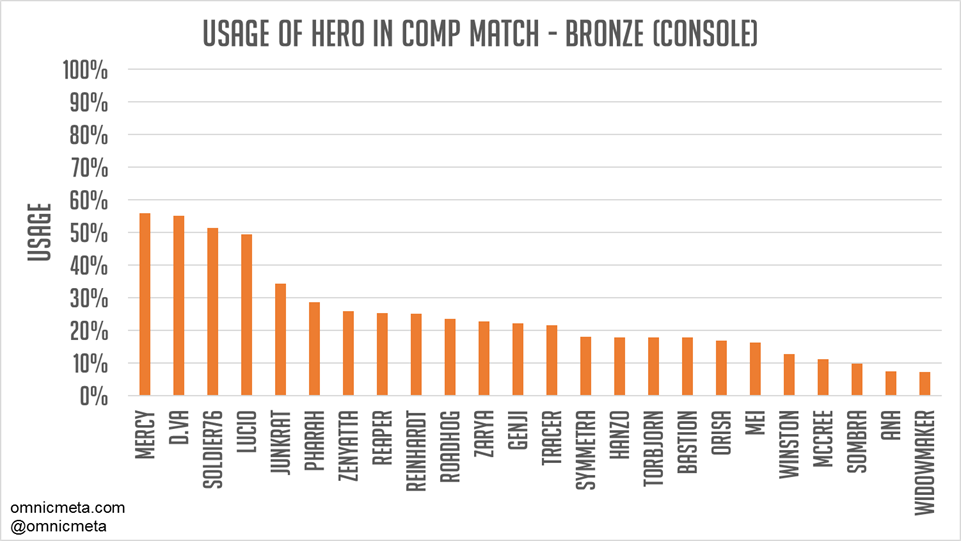