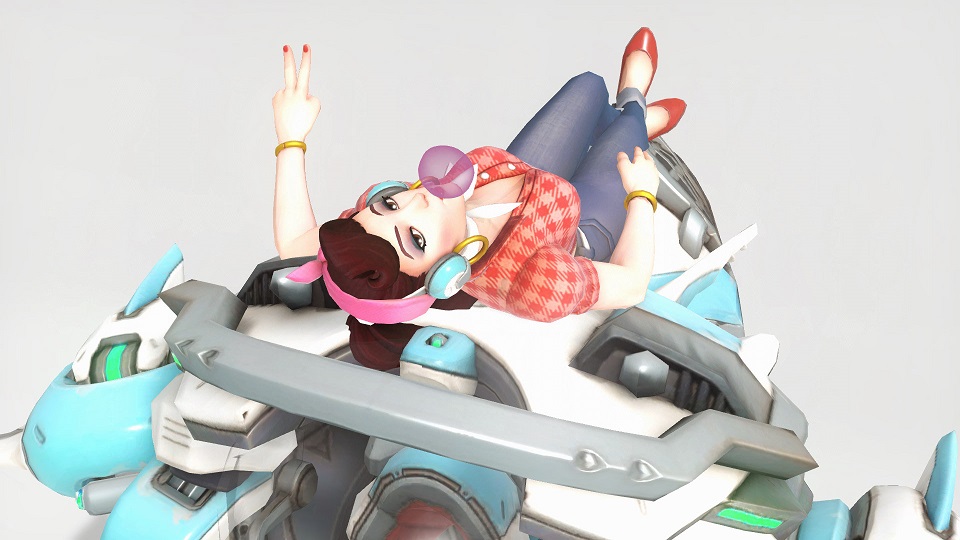 Season 5 is here and it is shaping up to be a much different one that Season 4.  Aggressive and fast paced team compositions are on the rise, while long time favorite heroes that don't fit into the meta are falling out of favor.


The main trends:
Dive team compositions have surged to start Season 5, with key pieces D.Va, Pharah, Tracer, and Winston as the main heroes gaining the most popularity this week.  The old standbys Soldier and Reinhardt are in free fall for many of the tiers, with Reinhardt in particular giving up his #1 Tank slot across nearly all tiers.  Mercy remains the #1 most popular, while for the sixth straight week Ana and Lucio have both declined in popularity across most of the tiers.

The infographic above presents the top 2 usage gainers for the competitive tiers. The big usage gainers this week vary depending on the tier, but several trends emerge.  Despite being quite popular heroes, D.Va and Tracer continue to  grow in popularity driven by the meta of fast paced and aggressive team compositions.  D.Va is up more than 5% on average across the tiers, while Tracer is up 4% on average.  Pharamercy has also increased in popularity this week, as Pharah sees big increases across the tiers, including a 6% increase at Masters Rank.  A final notable gainer is Roadhog, as he grows in popularity, possibly in a possible effort to deal with fast moving squishies of dive team compositions.

As far as the top 2 biggest usage losers this report, the big headliner is Reinhardt. Mirroring a trend seen on PC, Reinhardt usage drops are the absolute most we have seen since our coverage began at the start of Season 3.  He is down an average of 11% in usage across all tiers, with even larger drops at the higher tiers.  While the shift to dive has affected him greatly, the recent nerfs to his earthshatter height and well as many reported bugs may also be contributing factors.  Soldier and Ana experience the next biggest drops in popularity, particularly at the mid to high tiers.  Soldier's 5% damage nerf appear to have caused a bit of a knee-jerk reaction, while Ana continues to wane amidst her prior nerfs and the strength of Mercy.  D.Va's large drop at the Bronze seems out of place given her rise at all other tiers, but can be attributed to the continuing preference shifts within the tier. 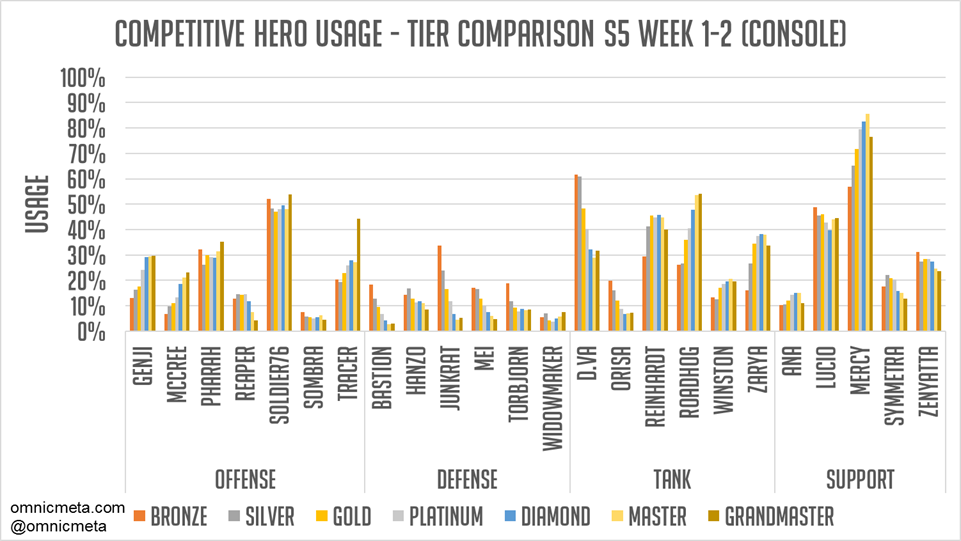 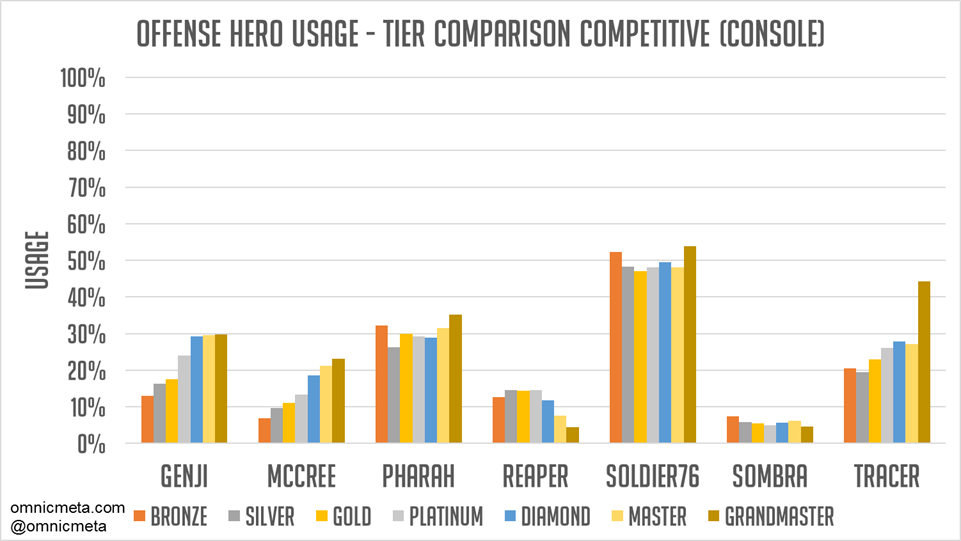 Offense heroes see big changes this week, as Tracer, Pharah rise while Soldier falls.  Soldier's fall may be partially attributed to his recent 5% damage nerf, but surprisingly there has not been an increase in the other main hitscan hero, McCree.  Soldier remains the most popular offense hero, and it may be awhile before he relinquishes his title.  Genji, Pharah, and Tracer are the three faces of dive team compositions, and also the #2 - #4 most popular offensive heroes this report.  All three character thrive on their mobility and high damage potential - with the end goal being quick wipes of the opposing team.  Given the prevalence of Mercy, Pharamercy is still a viable and popular strategy, one that currently has no end in sight, with no nerfs or changes on the horizon.  Reaper and Sombra continue to be unpopular in the current meta, but future changes to Reaper will help him battle against tanks much better. 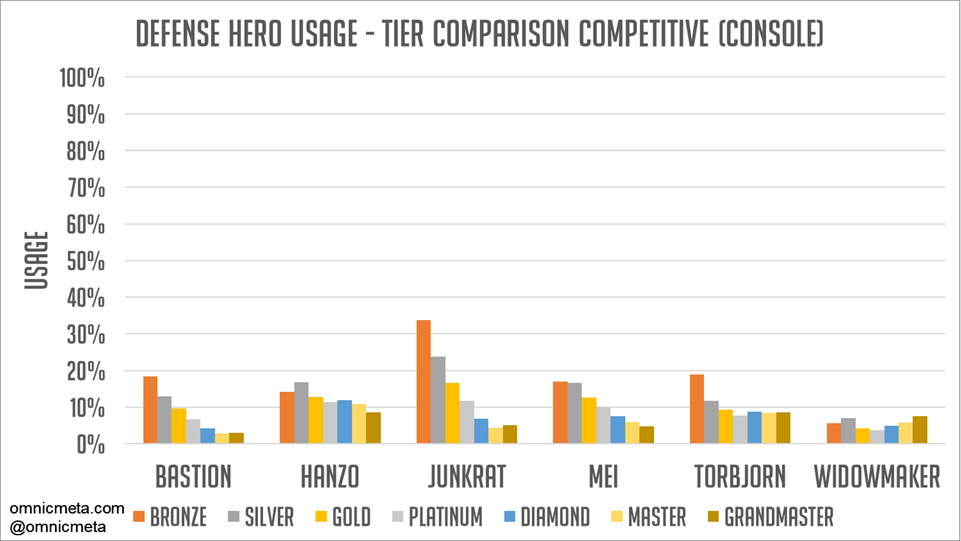 Defensive heroes remain a collection of heroes considered niche for competitive play.  The biggest surprise this report is the rise of Hanzo, who is now the most popular defense hero at higher tiers.  Hanzo grew 3% in popularity in tiers Diamond -> Grandmaster, likely stemming from the recent buff which increased his DPS by 10%.  With similar trend appearing on PC, time will tell if Hanzo will enter the meta in a bigger way.  Widowmaker is another big mover this report, decreasing an average of 2% across the tiers.  While she can certainly be a piece of dive team compositions on PC, it seems for now that console players are less interested in using her in that way.  Otherwise, Bronze tier continues to be the tier where defensive heroes are most used. Junkrat (34%),  Torbjorn (19%), Bastion (18%), and Mei (17%) all make the tier list cutoffs. 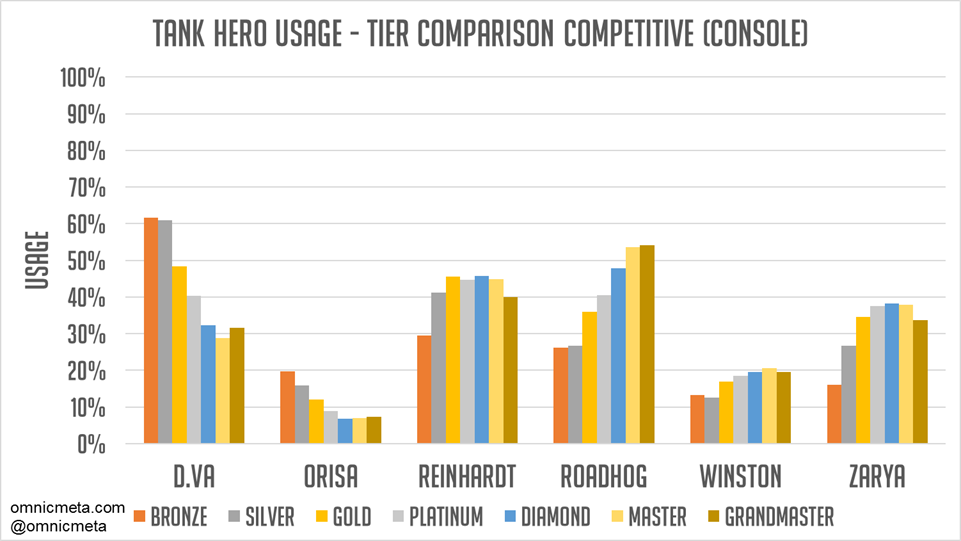 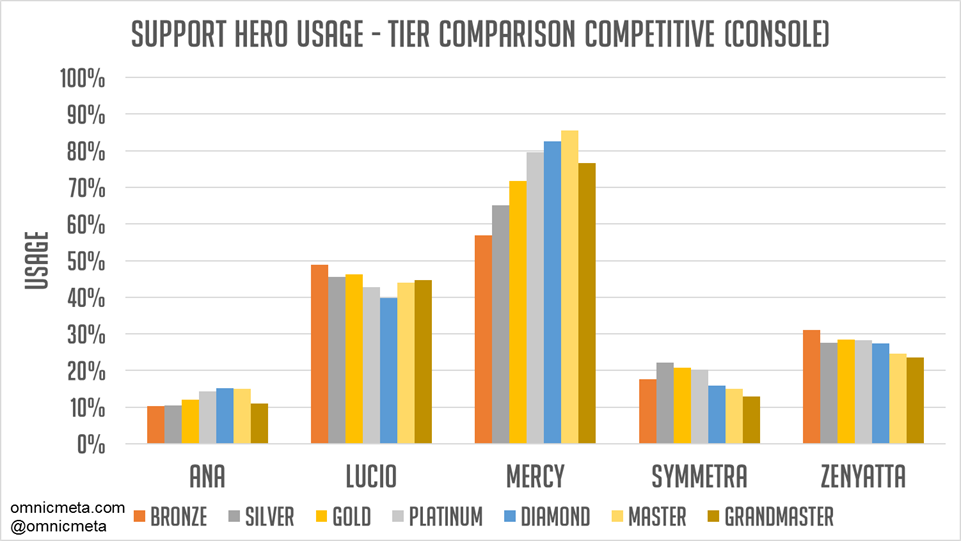 With the exception of a few particular heroes, Support popularity remains similar to the end of Season 4.  Mercy remains the #1 most popular hero on console Overwatch, where she dominates nearly every tier except Bronze (where she is #2 to D.Va).  Across all platforms Mercy is very strong and seen in nearly every game, with her high impact from healing, damage boosting, resurrect ultimate ability, and ability to pair incredibly well with Pharah.  As a continuing trend, Lucio has lost popularity for the sixth straight week, though his usage appears to be stabilizing.  The recent nerfs to his aura radius may not have been a deathblow to his usage, and with agressive team compositions on the rise, his utility may increase in the future.  Zenyatta continues to be a key part of dive team compositions with his discord and harmony orbs; he will be a hero to watch moving forward if dive continues to grow in popularity.  Symmetra continues to maintain her position as a niche support hero, with her ability to deal with highly mobile flankers a clear positive in the current meta.  Finally, Ana usage continues to drop following the nerfs at the beginning of Season 3, as she continues to solidify herself as the least popular support hero on console and a niche pick. 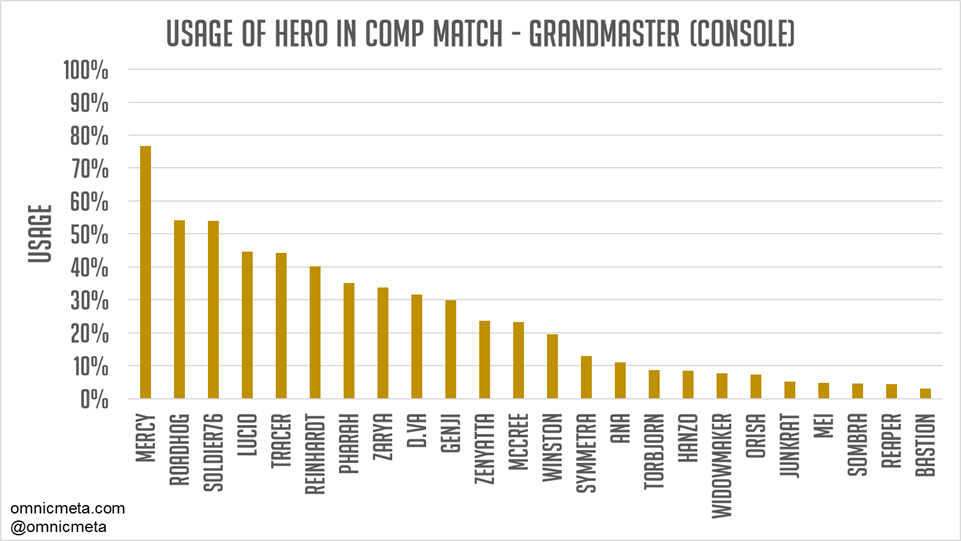 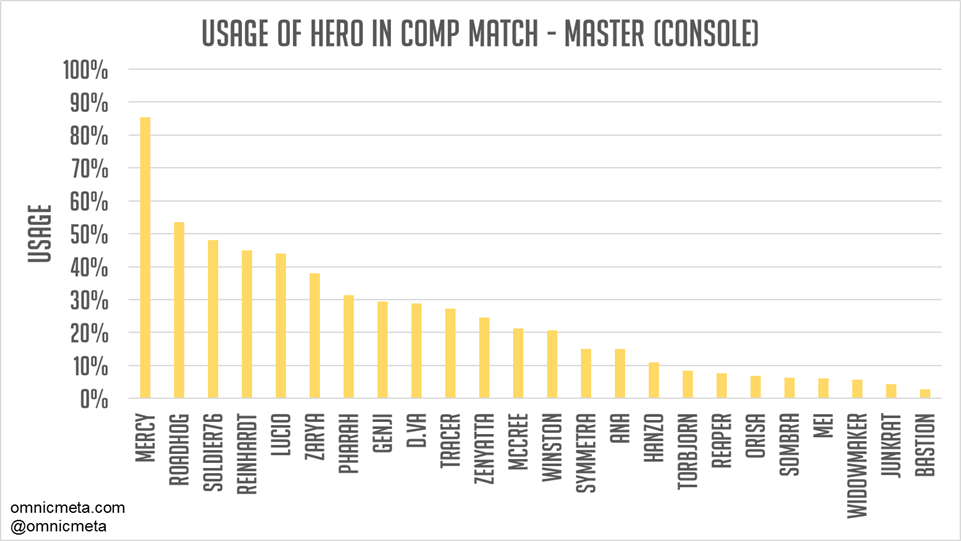 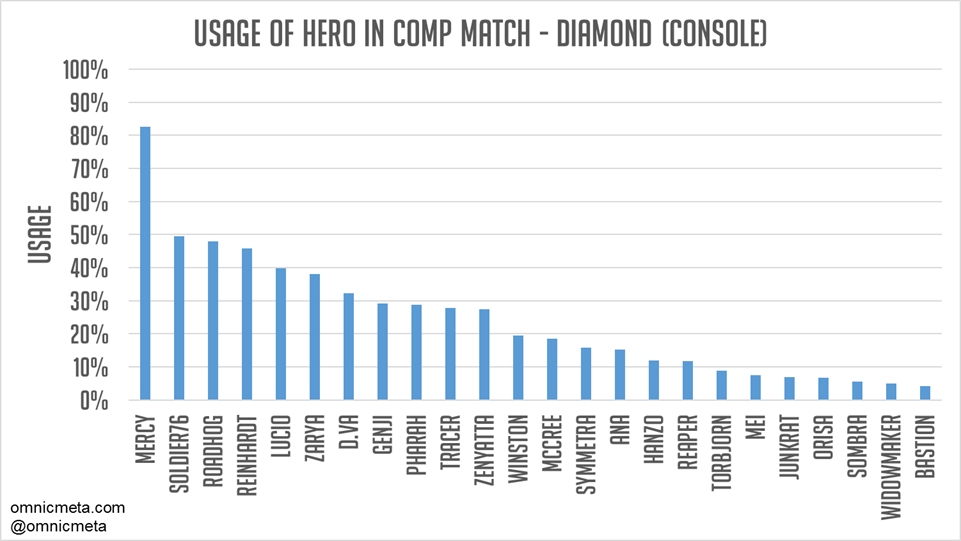 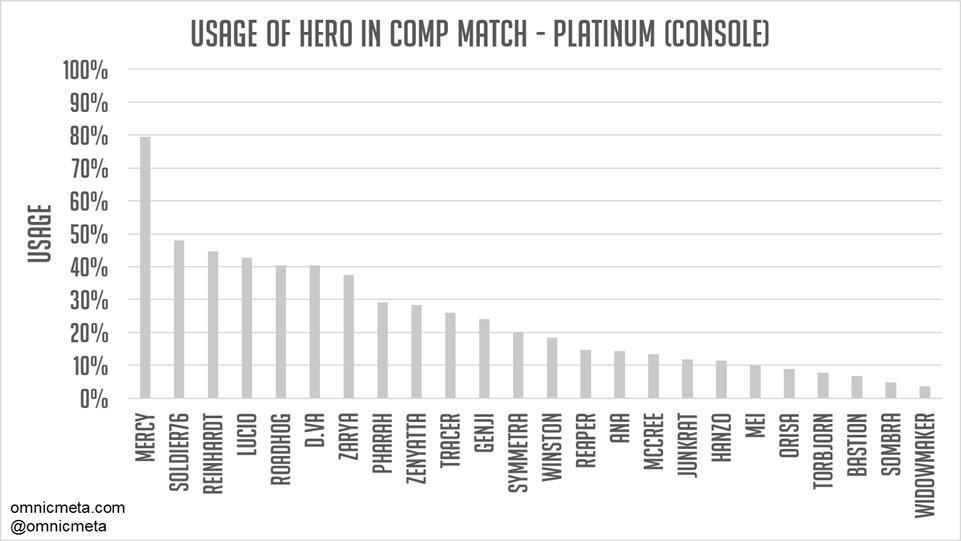 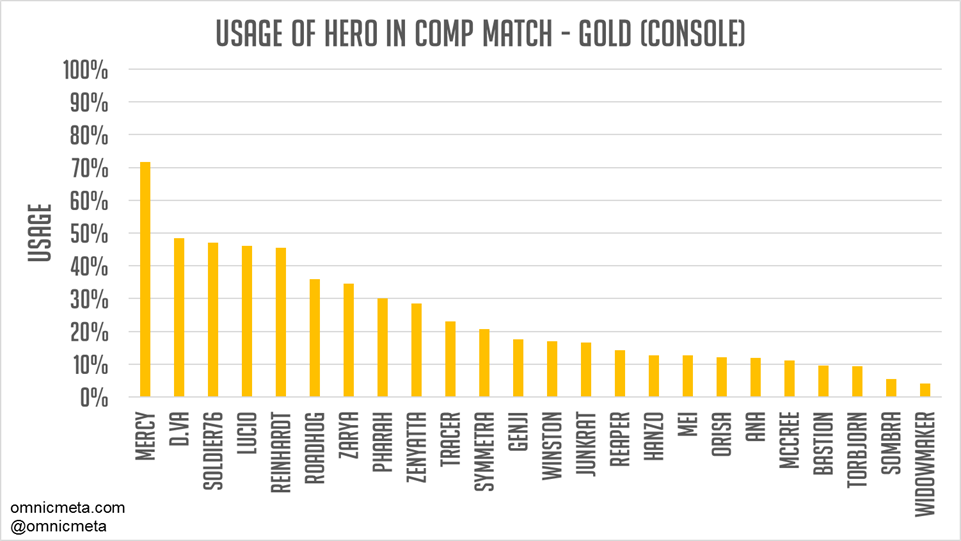 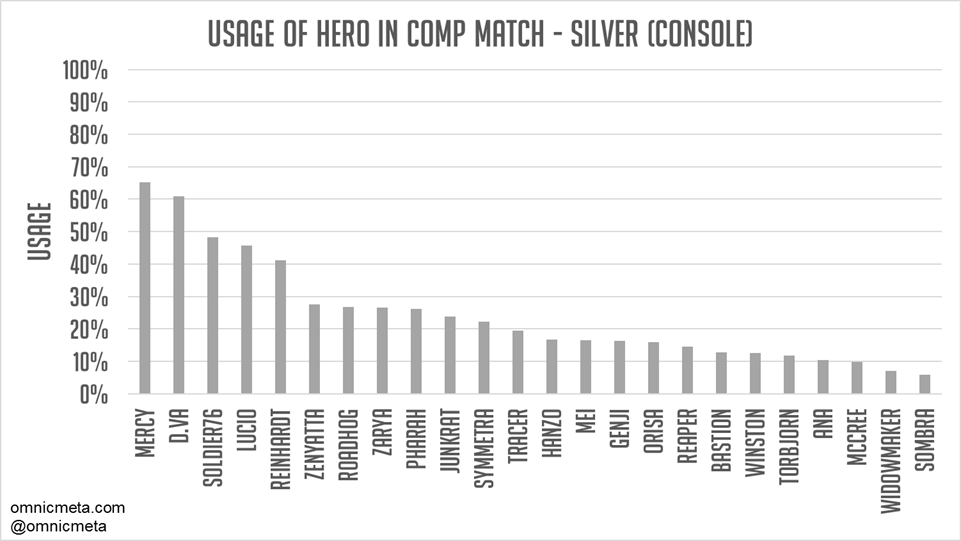 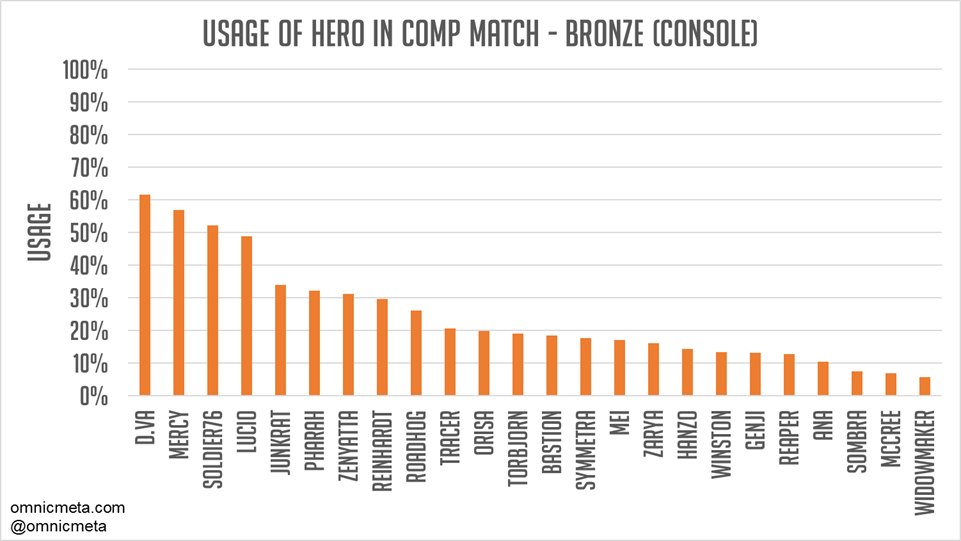