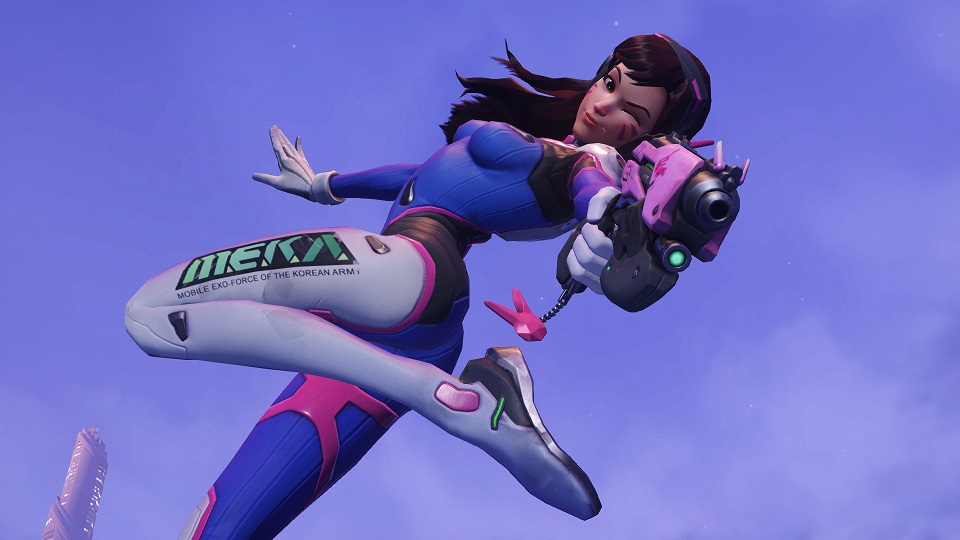 As Season 4 comes to a close, the meta continues to shift towards dive heroes.  D.Va solidifies herself as the dive tank hero of choice, while flankers, Pharmercy, and Zenyatta continue to remain popular.

The main trends:
D.Va and Mercy continue their ascent this report as the biggest gainers of popularity, while dive and flanker-heavy team compositions continue to be popular. Tracer, Genji, and Pharah remain popular offensive heroes for dive compositions on console.  For Tanks, Winston, Roadhog, and D.Va are gaining while Zarya and Reinhardt lose popularity.  Lucio continues his decline for the second straight report, but maintains his #2 support hero title.  A final surprise is that Defense heroes have surged in popularity in Bronze tier, possibly due to end of the season antics.

The infographic above presents the top 2 usage gainers for the competitive tiers. The big usage gainers this week vary depending on the tier, but several trends emerge. Mercy and D.Va continue to grow in popularity across the board, with both increasing by more than 2% across all the tiers. Perhaps the biggest surprise this report is the shake up in Bronze. In the past two weeks there has been a shift in Defense hero play, with different heroes being played, and less Junkrat.  It's unclear whether this change coincidences with Season 4 ending soon, but regardless there appears to be a big meta shift toward Defense heroes at Bronze.

As far as the top 2 biggest usage losers this report, Lucio continues his decent from last week, while Zarya and Reinhardt are the Tanks that appear to be less less popularity with the continued rise of D.Va. The huge drops at Bronze demonstrate the apparent "end of season" meta shift towards defensive heroes.  In higher tiers, offensive hero preferences also seem to be changing, with Genji, Soldier, and McCree seeing less usage this report. 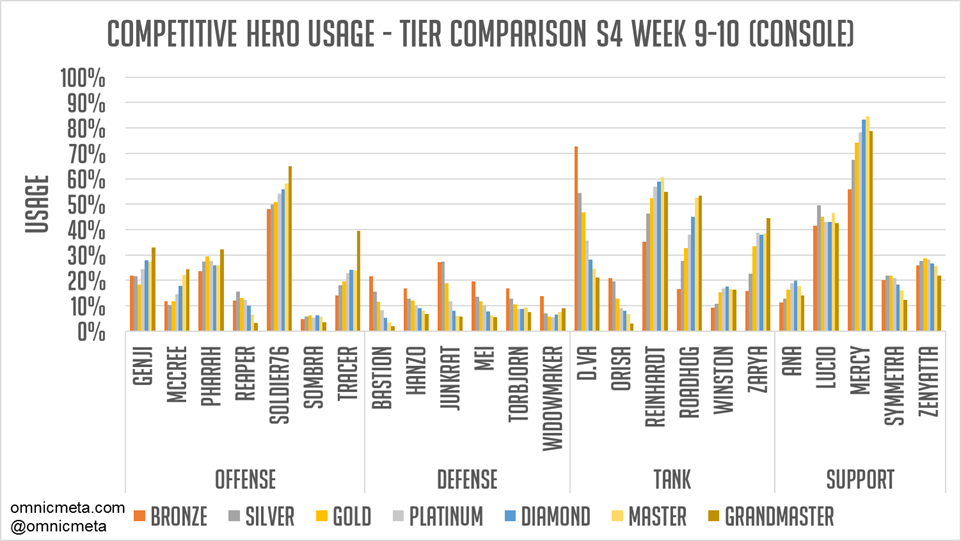 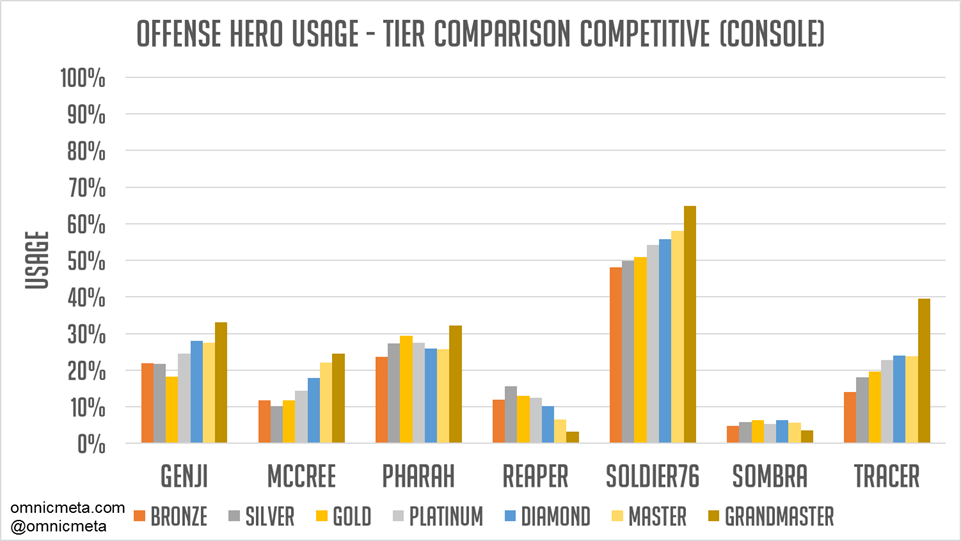 Offense heroes remain mostly unchanged from the last week, with a few exceptions. Soldier: 76 has been the most popular hero all season for Offense heroes.  Highly aggressive and flanker-heavy team compositions continue to be popular, and Pharah remains the #2 most used hero at most tiers, with Genji and Tracer not far behind.  While McCree continues to lose significant popularity at tiers Diamond -> Grandmaster, he still remain relatively popular at higher ranks and useful for dealing with flankers.  Reaper and Sombra continue to be unpopular in the current meta. 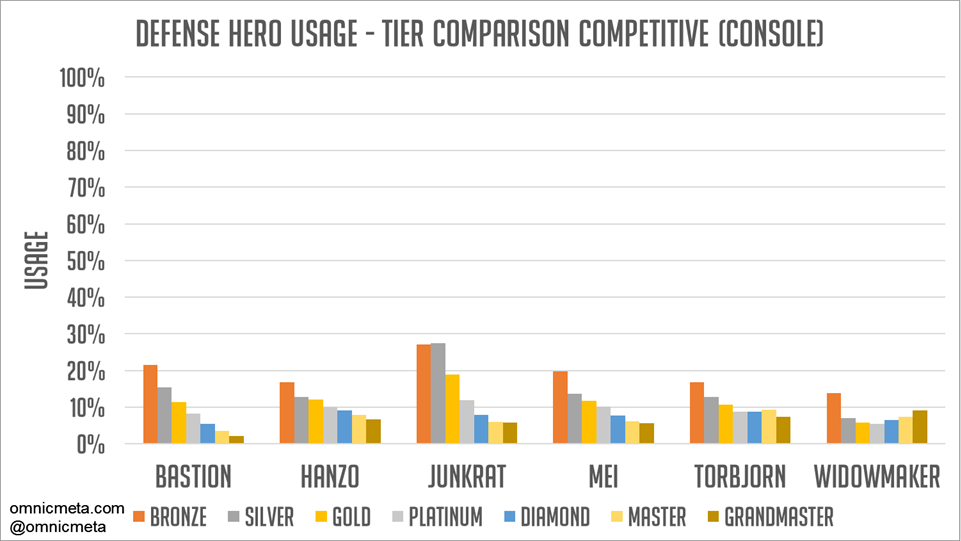 Defensive heroes remain a collection of heroes considered niche for competitive play.  This report, Defensive hero usage in Bronze tier has shifted and grown greatly, with nearly all defense heroes making Tier 4 in the tier lists (>15% usage).  Overall, Defense hero usage as a whole has gone up 6% this week, and Bronze teams in competitive now has 2x to 3x the usage of Defensive heroes as compared to other tiers.  As mentioned at the beginning of the article, it's unclear whether this is a end-of-season shift to niche heroes as some players stop competing, or due to another reason entirely.  Regardless of the reason, preferences for Defensive heroes have also shifted at Bronze, as Bastion and Junkrat usage shrinks while Hanzo, Mei, Torb, and Widowmaker usage increases.  For the remaining tiers, only Silver has heroes making tier list cutoffs (Bastion and Junkrat). 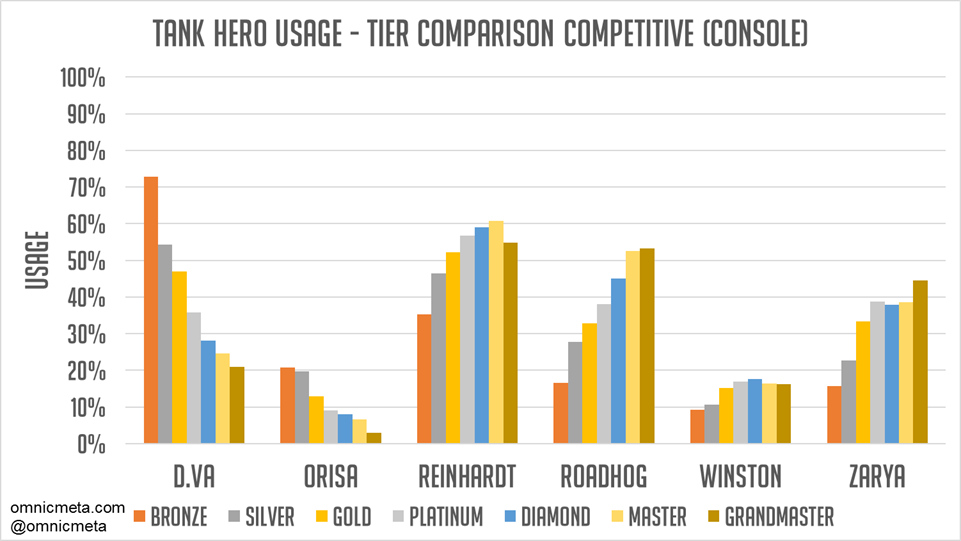 Changes in Tank usage continue this report. D.Va continues to gain, as does Winston, while Reinhardt and Zarya mostly fall.  D.Va in particular is approaching 75% usage, and has risen 2% on average across the tiers.  Both D.Va and Winston fit well into dive-heavy team compositions, and provide not only consistent close range damage but also utility through defense matrix and shielding.  With Winston usage on Console remaining lower than on PC, it seems that D.Va is filling the key role as primary dive tank.  Despite experiencing a 2% drop in usage across all tiers this week, Reinhardt narrowly remains the most popular tank overall, and the only true anchor tank in Overwatch.  However, Roadhog and Zarya continue to compete for the #2 slot at higher tiers, as Roadhog's damage / hook kill potential and Zarya's projected barrier / ult remains powerful given the meta.  Orisa remains a niche pick for the second report in a row, though the incoming buff to her shield cooldown (from 12 seconds to 8 seconds) may change her usage in the future. 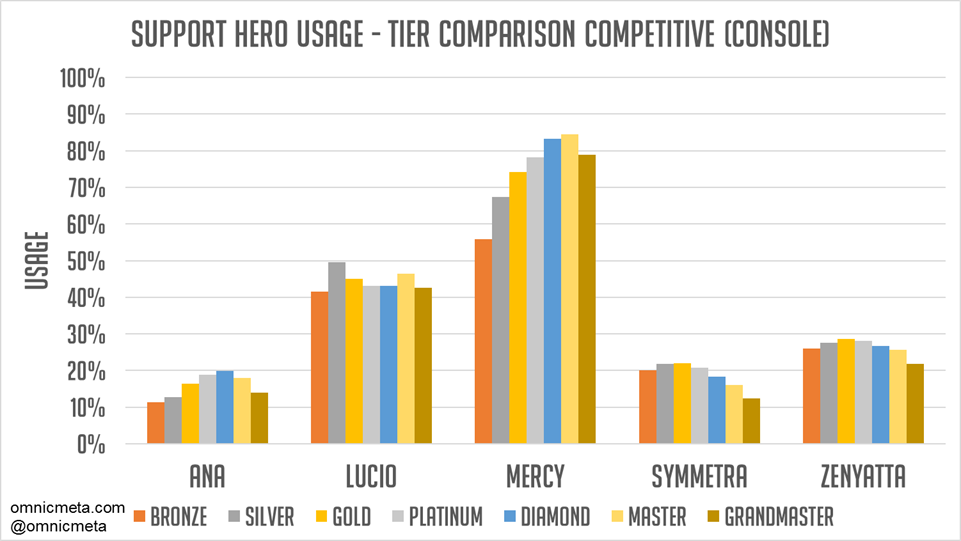 Support popularity continues to shift.  For the second straight report, Lucio is the biggest loser of popularity, falling an average of 2% across all tiers.  While a most of the change can be chalked up to a large loss in Bronze (13%), Lucio still lost significant popularity in 5 out of 7 tiers.  If the trend continues in future weeks, it seems likely that the recent kit rework is to blame (most notably the huge aura radius nerf).  Still, Lucio currently remains the #2 support hero, with no looking competition for that spot.  Mercy continues to gain, this report she is up 3% in Gold, 5% in Diamond and 8% in Grandmaster tiers.  Mercy is now above 75% usage in 5 out of 7 tiers.  Zenyatta continues to be useful for dive-heavy team compositions with his discord and harmony orbs.  Symmetra maintains her gains from last report, and still is above 20% usage in tiers Bronze -> Platinum, likely due to her effectiveness against an increasing number of flankers.  For the first time this season, Ana's usage has not decreased and appears to have stabilized, though she remains the least popular support hero on console. 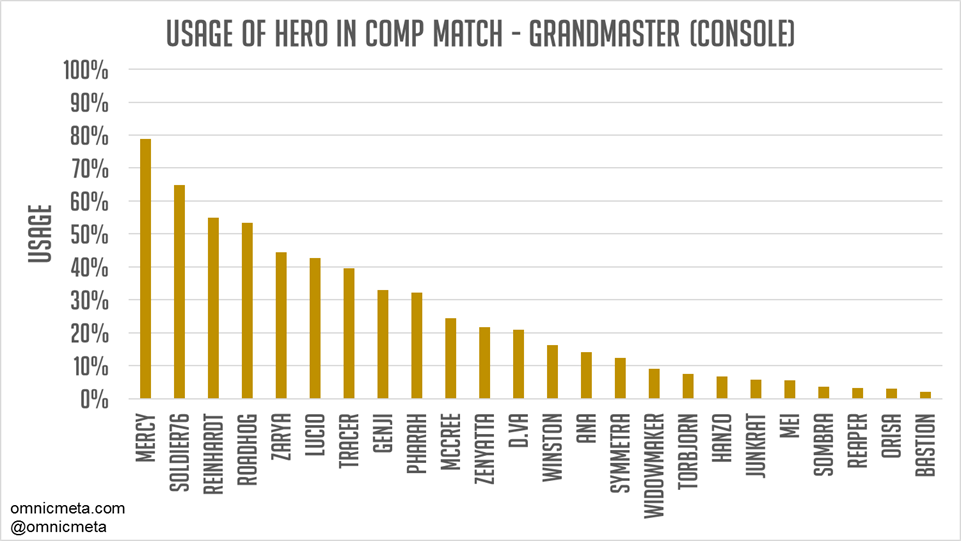 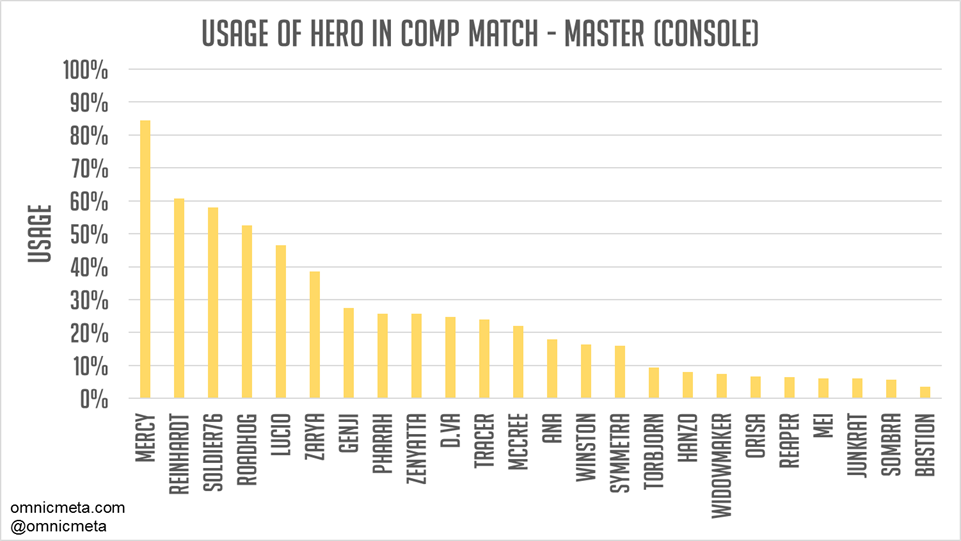 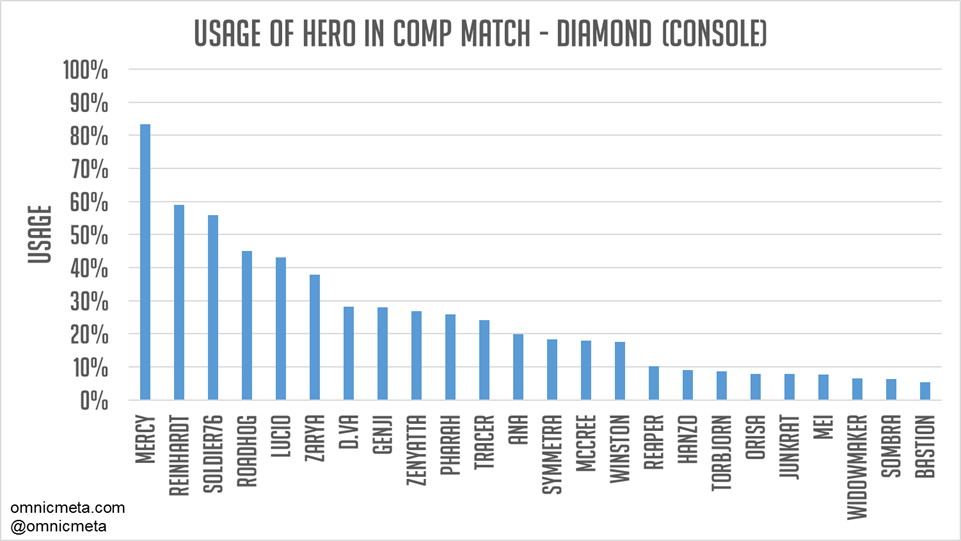 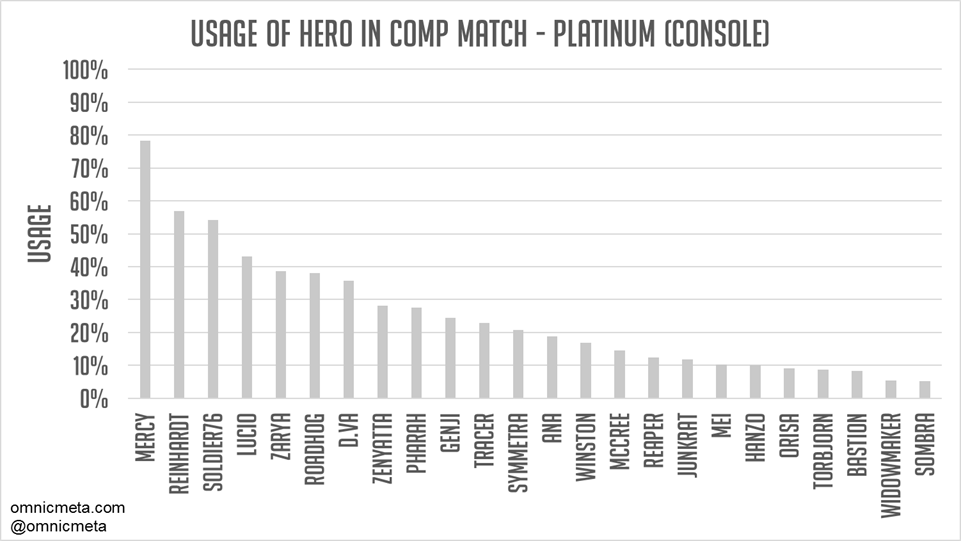 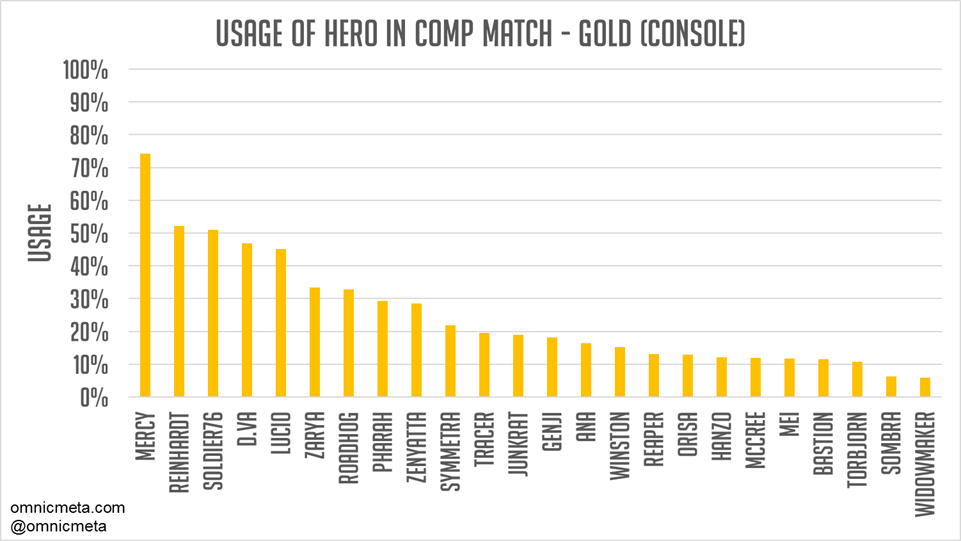 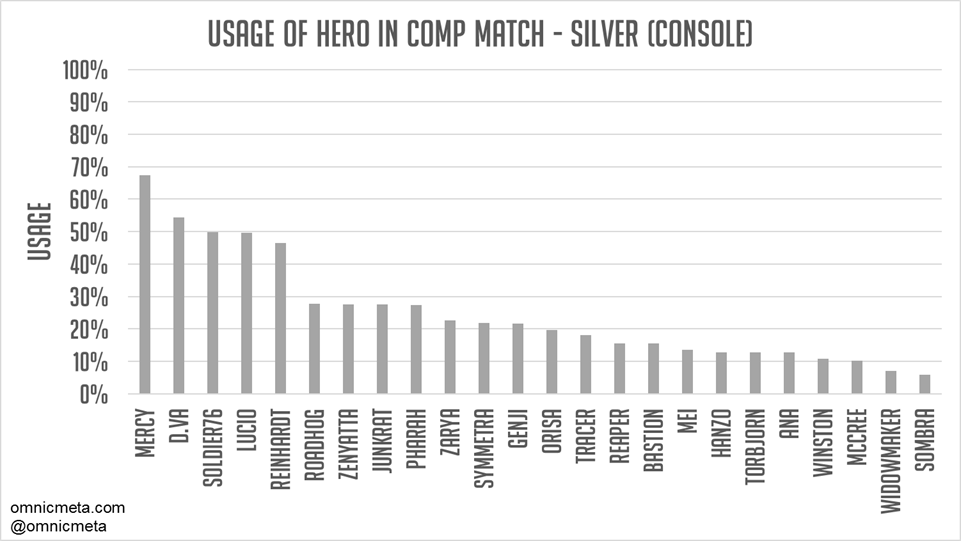 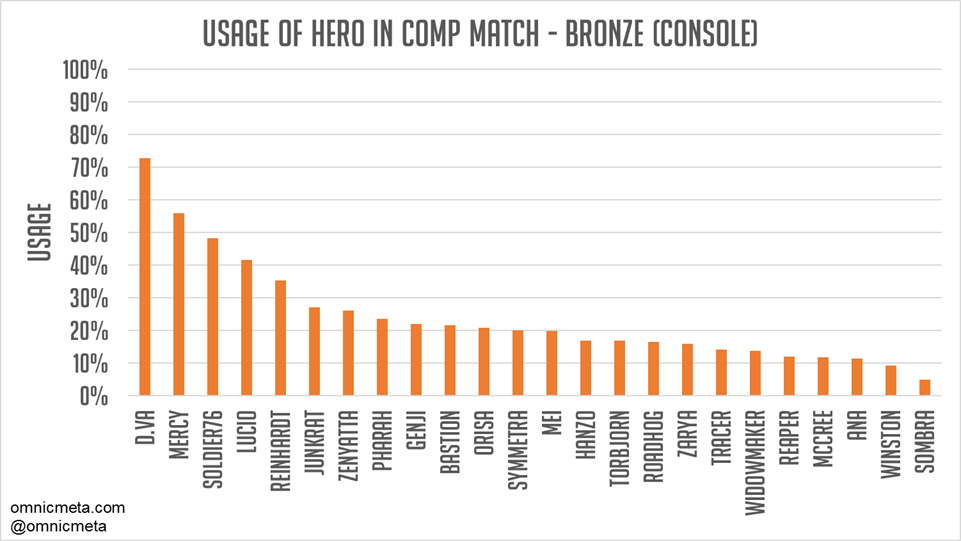