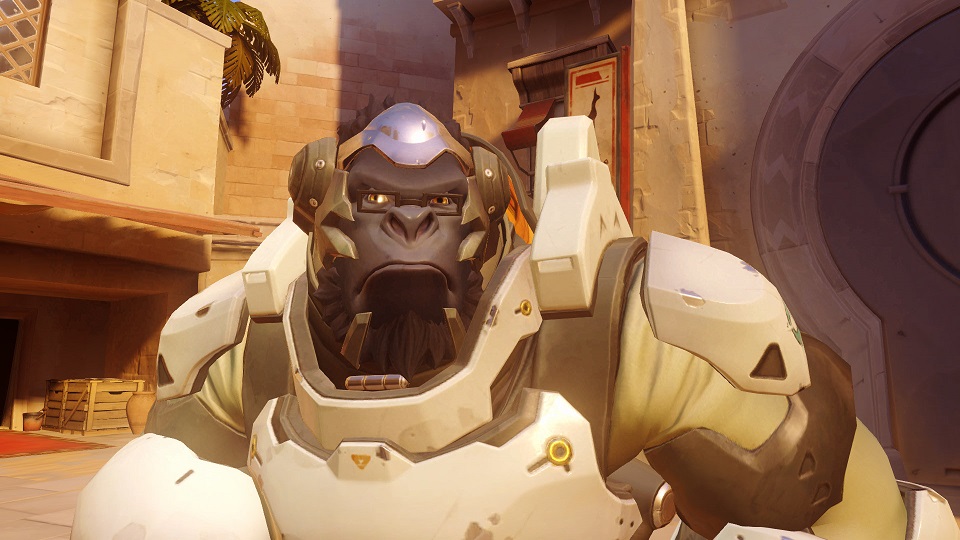 There continue to be shakeups in Console hero play across the board, but this week's report represents the continuing trend in team compositions - the shift to dive heroes.  It appears as if dive has fully caught on, with the growing popularity of  Winston and D.Va being the final indicators.  All in all, flankers are in, Pharmercy is in, and Zenyatta is starting to see more play. 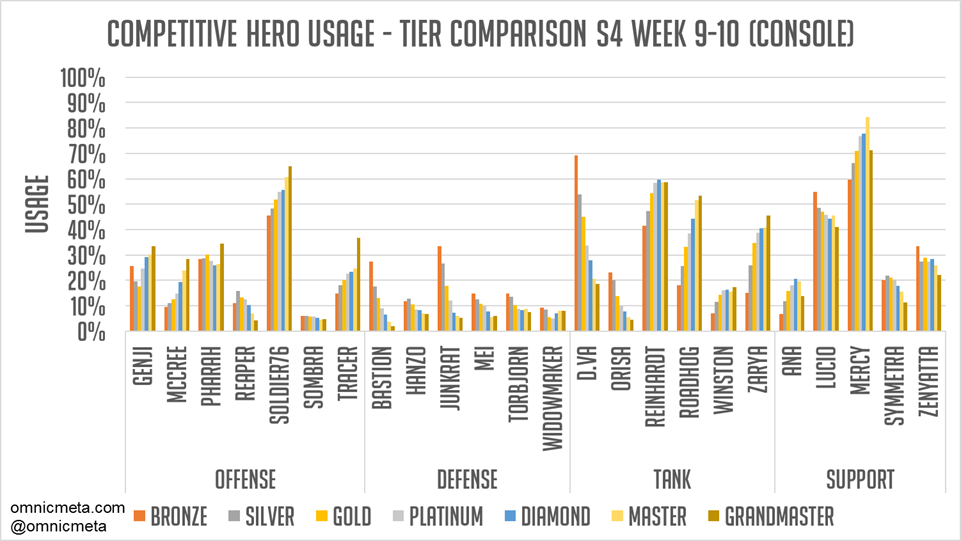 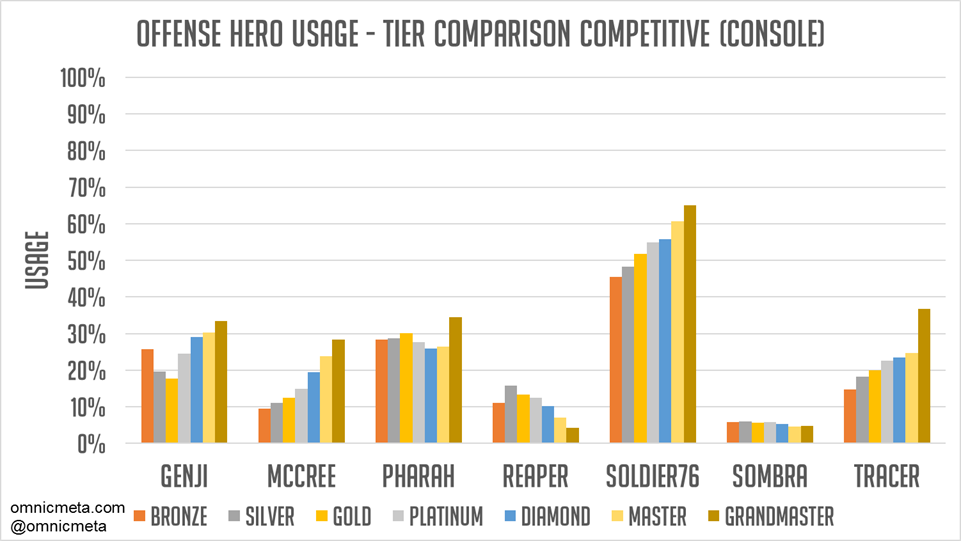 Soldier: 76 continues to be the story for Offense heroes.  He is far and away the most popular offensive hero, gaining more this week at the higher tiers.  Soldier is now the #2 most popular hero at Grandmaster and Master tiers, only behind Mercy.  Despite a 5% damage nerf on the PTR horizon, the general expectation seems to be that his usage won't dip much if at all.  His sprint, heal station, and ranged damage make him arguably the best self-sustaining offense hero at the moment.  McCree has lost significant popularity this week, likely due to the somewhat expected back and forth as Soldier and McCree often compete for ranged hitscan roles.  Currently, dive team compositions are very popular, which would seem to bode well for McCree as his flashbang ability is particularly useful against flankers.  However, while Genji and Tracer continue to be highly picked (especially at higher tiers), there also has been a big increase in D.Va and Winston, which are much harder to deal with as McCree.  So, for the moment it appears that Soldier is preferred. Genji, Tracer, and Pharah continue to (mostly) hold their popularity as key parts of currently popular team compositions.  Reaper and Sombra continue to be unpopular in the current meta. 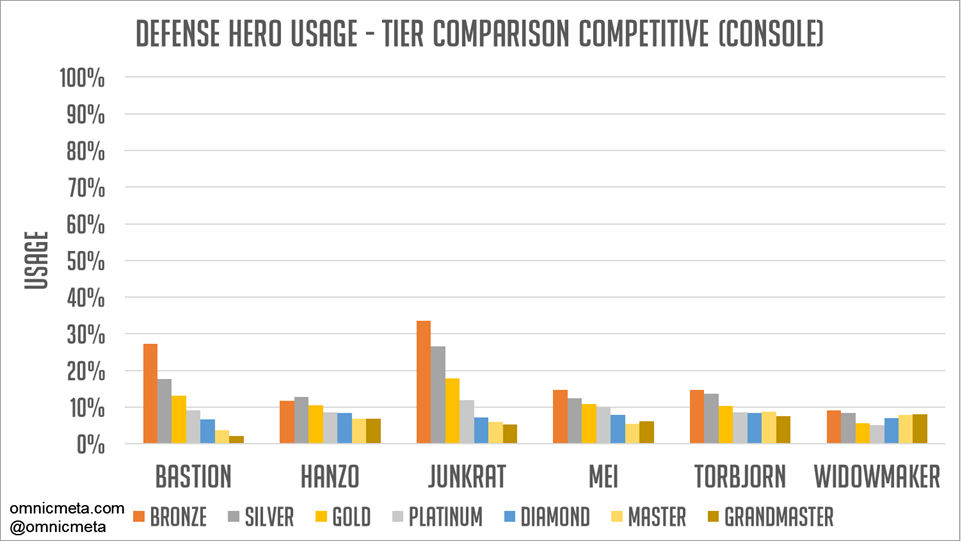 Bronze ans Silver tiers continue to appreciate defensive heroes much more than other tiers.  However, the Defensive category generally contains a group of heroes which continue to be considered niche for competitively play.  For the first time since the beginning of Season 4, Bastion's popularity is stable, only losing an average of 1% this report.  Bastion and Junkrat remain on only two semi-popular heroes, and mostly at tiers Bronze -> Gold.   The biggest gainer this week for defense heroes is Mei, who gains an average of 2% this report across nearly all tiers.  It's unclear whats the exact cause of this gain, though heavy flanker play may be at least partly responsible.  The remaining defensive heroes (Hanzo, Torbjorn, and Widowmaker) remain uncommonly seen across all tiers. 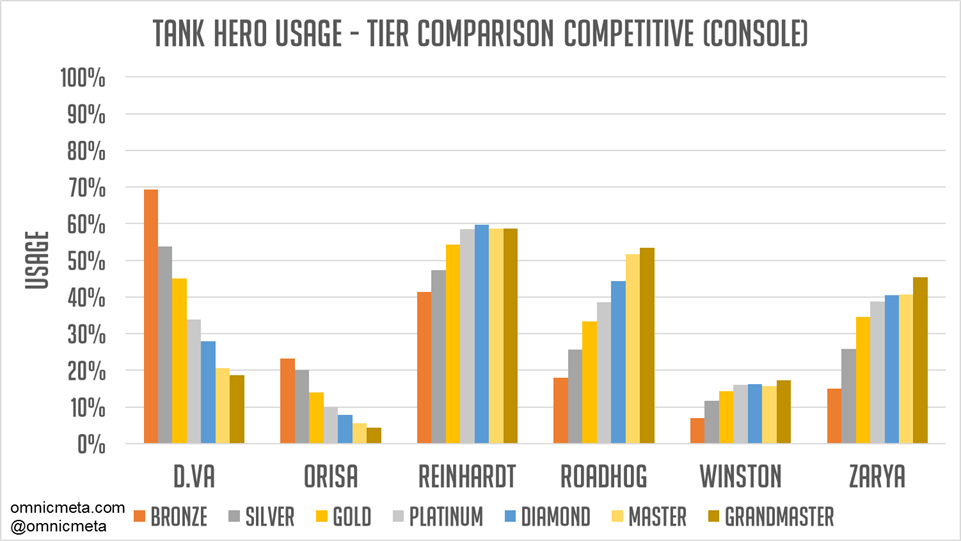 Major shakeups in Tank usage continue this report. The biggest gainers across all tiers include both D.Va (+3%) and Winston (+2%), while the biggest loser is Zarya (-3%).  These changes appear to represent the general meta shift towards more dive-heavy team compositions.  Both D.Va and Winston can provide useful shielding for the team and quickly engage/disengage using jumps/boosts.  Winston's popularity has increased for the past 7 weeks, though his usage remains somwhat low for the moment. Reinhardt continues to be the most popular tank overall (except D.Va at Bronze and Silver) as his shield ability continues to be a key pieces of many team compositions.  With Zarya ceding much ground this report, Roadhog emerges as the most popular offtank at high tiers.  His hook / one-shot ability and healing continue to make him a strong hero.  Orisa's popularity seems to have settled, as she doesn't see any major increase in play this report. At the moment, lower tiers such as Bronze and Silver seem to like Orisa the best, while otherwise she is the least popular tank overall. 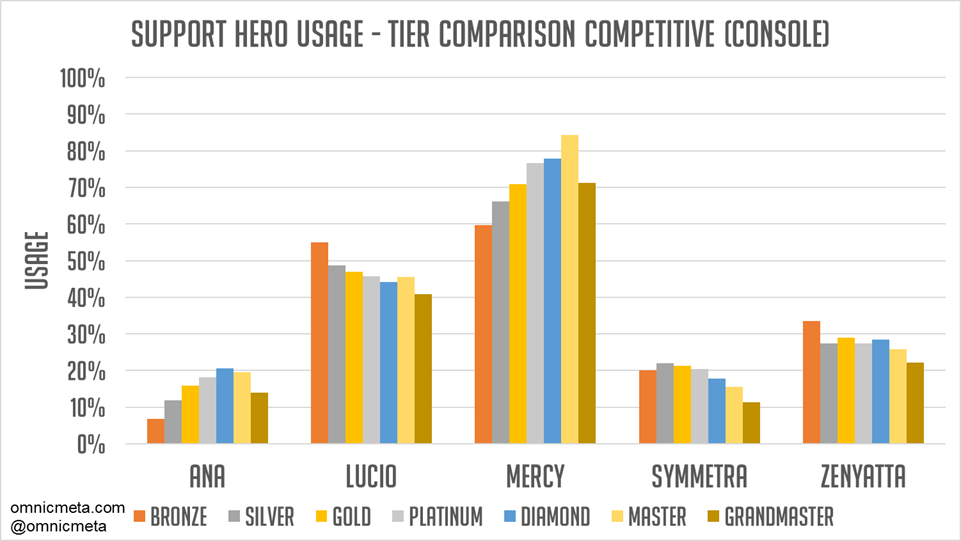 The biggest news this report is the shakeups in Support popularity.  For the first time, Lucio is the biggest loser of popularity, falling an average of 4% across all tiers.  It's unclear whether these losses are due to the rework of his kit, and massive nerf to his aura radius.  However despite the loss of popularity, Lucio currently remains the #2 support hero.  For other supports, both Mercy and Zenyatta gain 2% in popularity this report. Mercy's rise is a continuing trend since the beginning of the season, while Zenyatta is proving even more useful for dive-heavy team compositions with his discord and harmony orbs.  Surprisingly, Symmetra has also gained this week and is not above 20% usage in tiers Bronze -> Platinum, likely due to her effectiveness against an increasing number of flankers.  Ana also continues her decent, and now is arguably the least popular support hero on console. 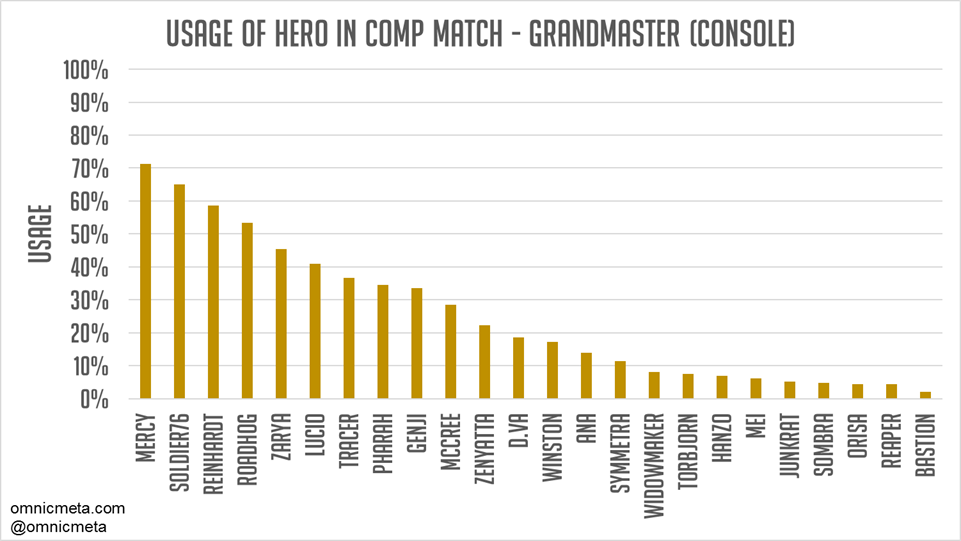 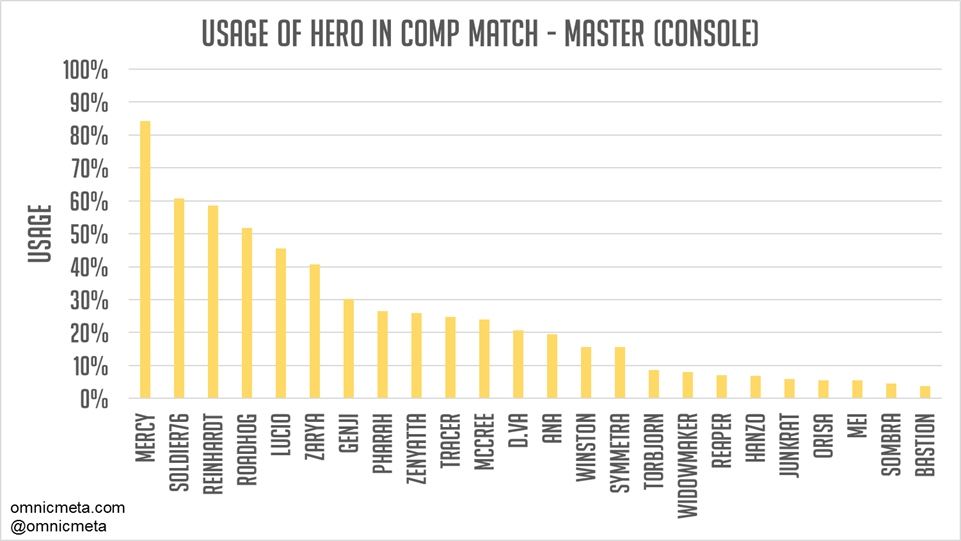 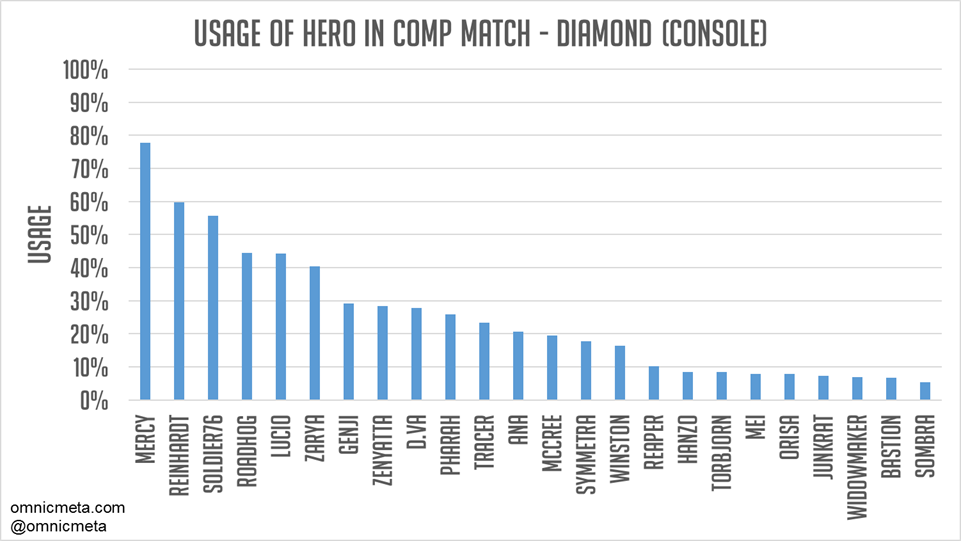 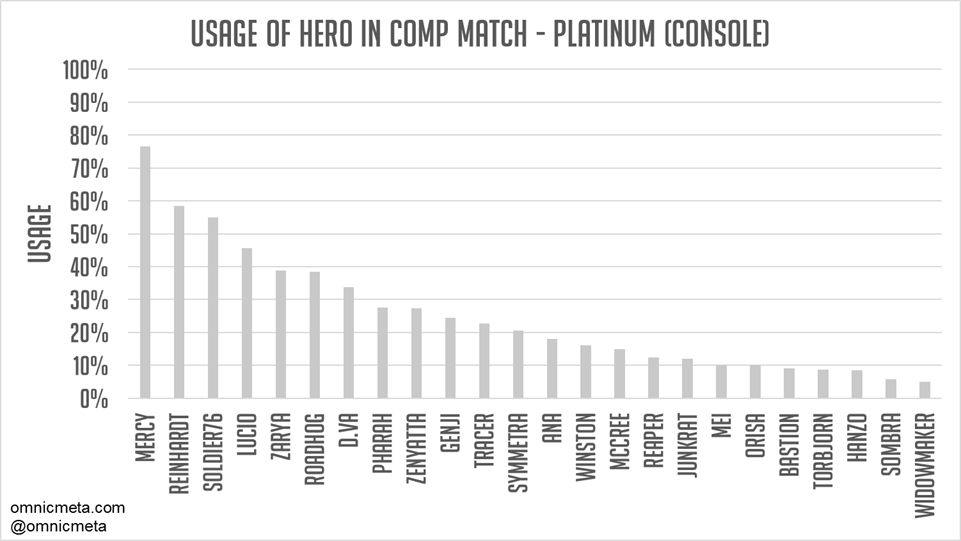 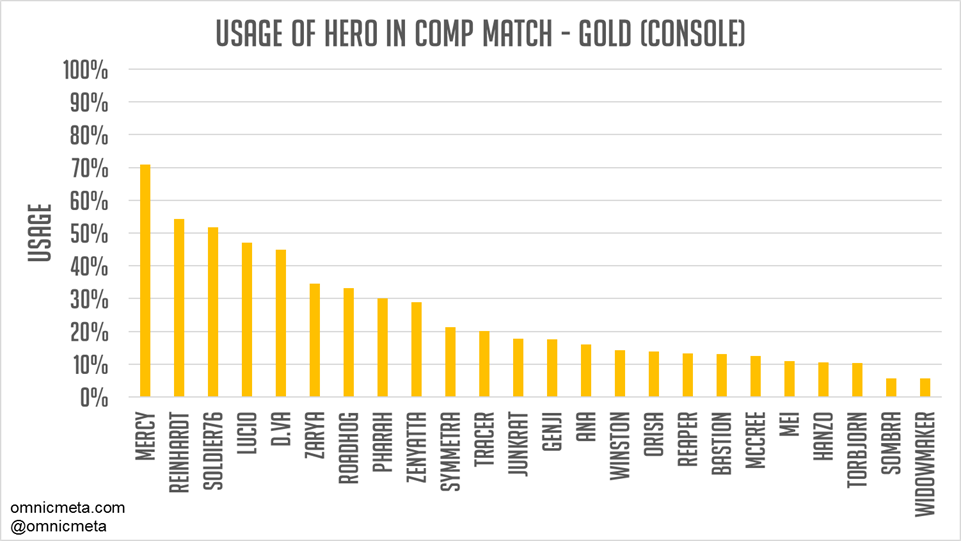 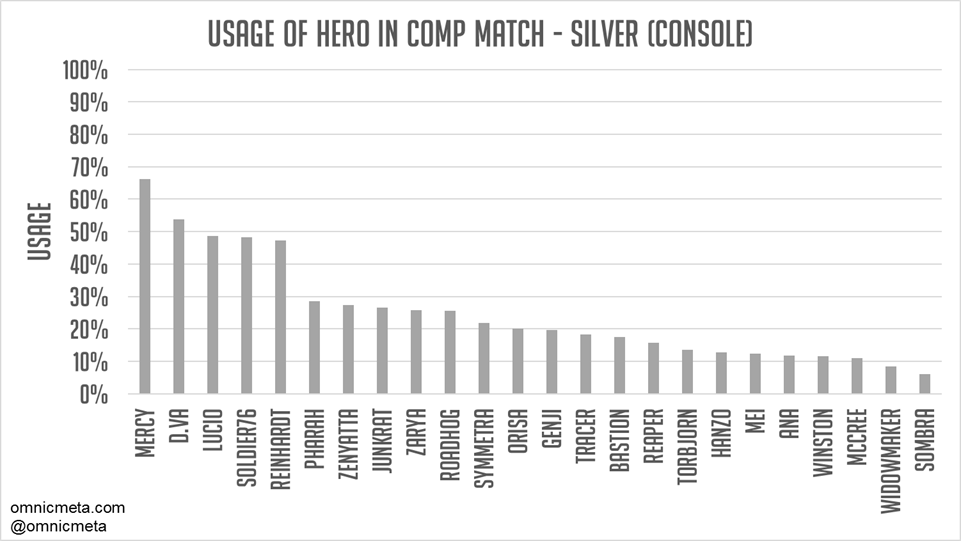 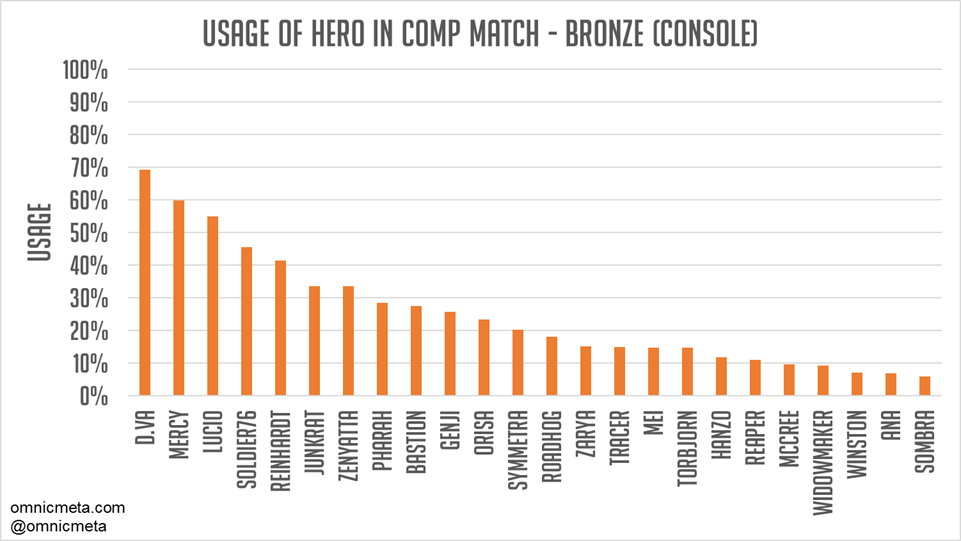