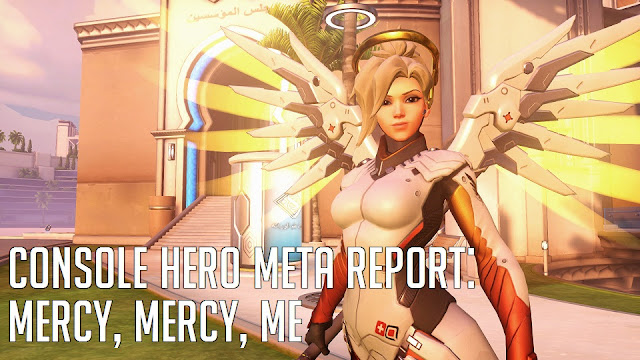 Patch 1.15 was a big patch with the rework to Mercy and the major changes to D.Va.  There have been a lot of predictions on what the changes would do to the meta - and I think many people are surprised at the actual result.  On Console, Mercy seems to have captivated higher tiers at a near 100% pick rate, while D.Va is finally coming back into the meta after the slow decline of Dive team compositions.  As always I hope you enjoy this report!


This report has new content!  Below each Competitive Tier (Bronze / Grandmaster) breakdown are the Top 5 heroes for the report - ranked by winrate.  The list only includes heroes that are being heavily played - at least 25% usage.  These five heroes listed in each tier are the strongest in the game currently. 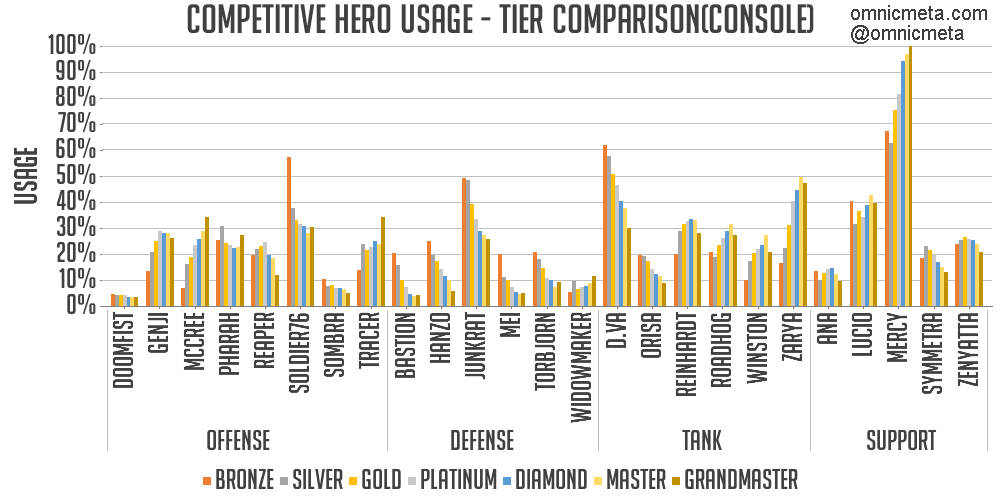 Mercy - the most popular hero in Overwatch got a massive rework in Patch 1.15.  With Resurrect as a regular ability, Mercy is stronger than ever before - and more players are flocking to her.  In the higher tiers especially, she has jump to near 100% usage.  The biggest impact has been to Lucio and Zenyatta, who are being played significantly less as a result of Mercy's increased play.  Admittedly some of the new mechanics for Resurrect and flying with Valkyrie may take some getting used to - we may see a trickle down effect with lower tiers playing her at much higher rates in the near future.

D.Va in Patch 1.15 is in a much different state than we have seen her recently.  While the big nerf to Defense Matrix appears to have greatly affected her ability to tank damage, her DPS has seen a big boost with the addition of her Micro Missles ability. The result? For the first time in many weeks - D.Va has stopped her massive drop in popularity and finally gained usage.  Time will tell where exactly her place in the meta lies - will she return to her peak popularity?

At the moment, Zarya remains the most popular tank at the highest tierse (and D.Va at the lower tiers).  However, Roadhog sees another bump in popularity, stemming from Patch 1.14 changes to self-healing which has directly translated to much greater success in game.  He is still not nearly as popular as he used to be, but players seem to be taking very well to him particularly at the higher tiers.  Tanks in general seem to be in a good place right now as Reinhardt has similarly seen a net bump in play.

A continuing trend is the downward trajectory of Soldier's popularity.  He no longer is the clear top DPS pick, and there are a cast of heroes that are competing for play time currently.  McCree is up in usage again, and as a mid-range to long-range hit scan hero, more directly competes with Soldier.  Hanzo is making a big push as a popular hero in lower tiers, and his ability to one-shot most other heroes in the game can be especially powerful.  His scatter arrow can make quick use of tank, and even shields as well.  Other popular DPS heroes, like Genji and Tracer are either up or down depending on the tier.

Finally, Junkrat continues to maintain his position as one of the most popular DPS heroes in Overwatch. Patch 1.14 continues to have a huge impact as Junkrat place in Overwatch has been transformed.  The double concussive mines and the greatly improved Rip-tire ultimate has really helped his fortunes.  Junkrat's winrates continue to be at the very top of the games for meta heroes as well - often several percent higher than other top heroes.  In many ways, Junkrat's rise from the ashes make him of the the most prominent faces in Season 6.

Some interesting trends abound after Patch 1.15 has hit.  While PC has seen Mercy's pick rate jump across all tiers, only Diamond, Master, and Grandmaster see big changes this report.  Mercy is up more than 10% usage in those tiers - and hits near 100%.   McCree is up as well, seemingly taking share directly from Soldier.  For Tanks, Roadhog and D.Va are both up fairly significantly across all tiers.  Changes from Patch 1.15 seem to be trickling down from higher tiers, as the lower tiers are more in flux this week. Bronze and Silver see bigger swings as Hanzo and Junkrat are being played more, with Tracer and Pharah seeing big gains at Silver tier.

There are some surprising heroes that have lost significant play since the last report.  Lucio and Soldier are down across most tiers by a significant margin as McCree and Mercy gain popularity.  The most popular tank Zarya also sees a significant dip in usage as Roadhog and D.Va have increased.  Lucio, Soldier, and Zarya remain incredibly popular, but their continuing loss in popularity appears to be signaling a shifting meta. 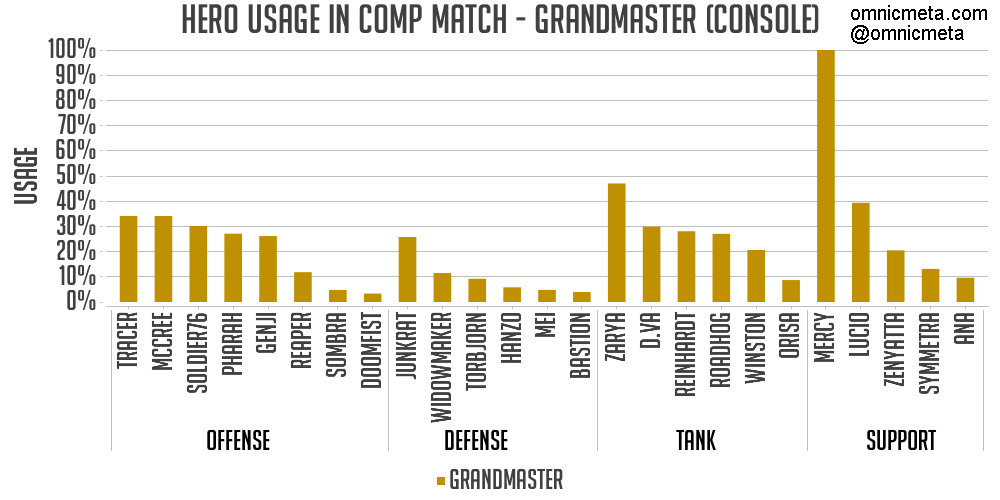 Offense/Defense:  Tracer (+4%) and McCree (+3%) surge this week as Soldier (-2%) continues to fall more out of favor.  Interestingly, Junkrat (-4%) falls a bit but still remains very popular, while Pharah and Genji round out the list of top heroes. 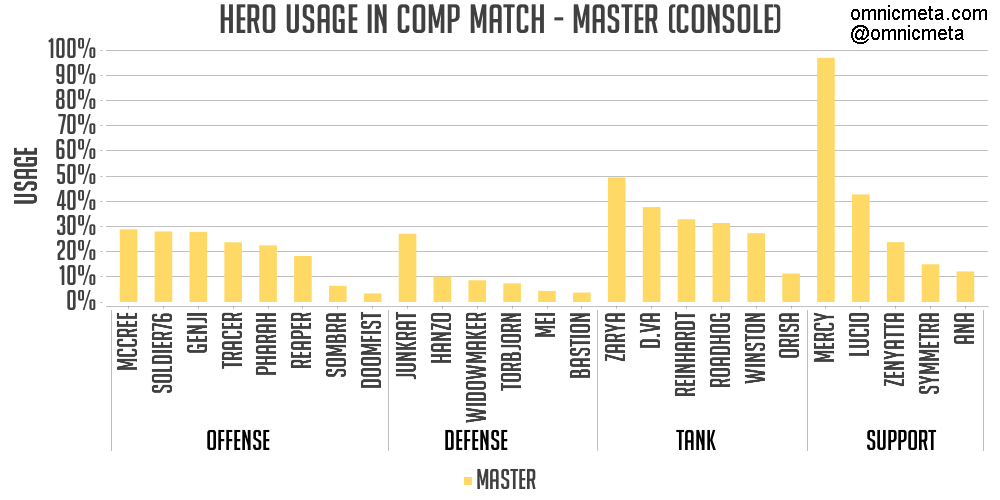 Tank:  Zarya remains the most popular tank, despite falling -3% in usage.  D.Va (+2%), Reinhardt (+2%), and Roadhog (+4%) are growing in popularity and are all close behind.  Winston usage remains unchanged, and is still seeing significant play. 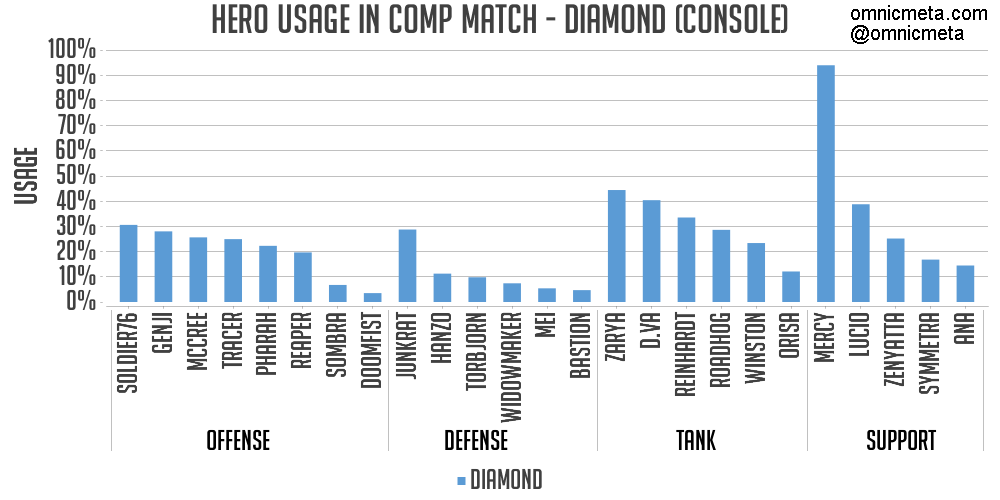 Offense/Defense: Soldier (-3%) remains the most played DPS hero, followed by Junkrat.  Genji, McCree (+2%), and Tracer are seeing more than 25% usage.

Tank:  Zarya (-5%) is still the top-played tank, but is falling out of favor while D.Va (+2%) and Roadhog (+2%) are find their footing after their patch changes. 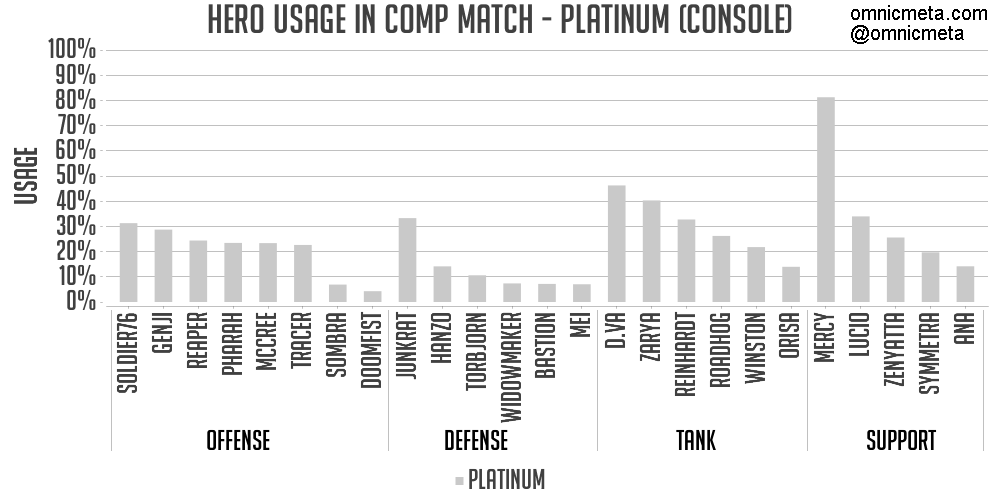 Offense/Defense:  With Soldier's -3% decrease in usage, Junkrat has moved into the #1 DPS slot, though barely.  The other big mover is McCree (+3%), who seemingly has take his share from Soldier.  Genji, Reaper, Pharah, and Tracer are still heavily played and see little change this report.

Support:  Less players are playing support the past few weeks, as total play is down -4%.  Lucio is down the most, at -5%.  Mercy (+2%) remains the most played hero by far, with Zenyatta and Symmetra seeing some play. 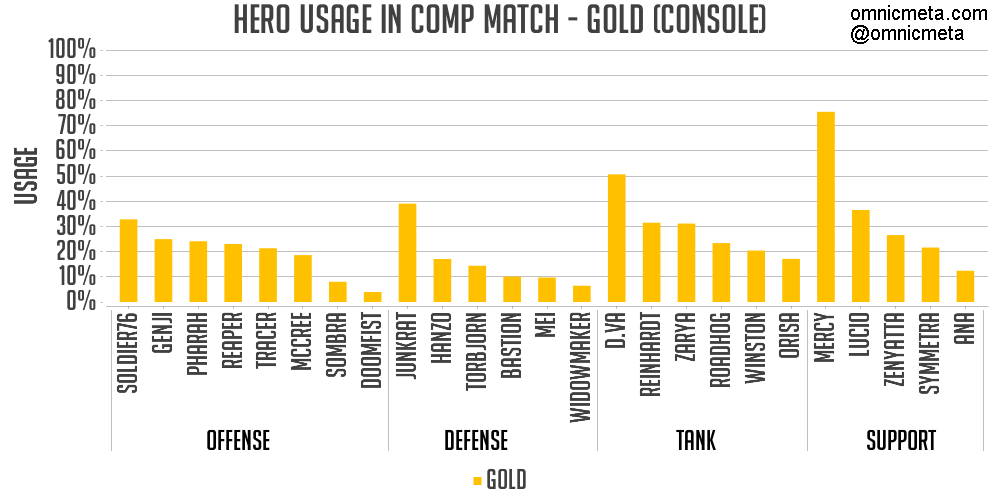 Tank:  There was little movement this week, as D.Va remains the top choice. Zarya (+2%) fell a bit, allowing Reinhardt to climb to the #2 spot.  Both Reinhardt and Zarya are seeing more than 30% usage in Gold.

Support: Mercy remains the most popular support by far.  However support play is down overall, as Mercy fell -5% in usage, Lucio -3%.  Lucio, Zenyatta, and Symmetra continue to see significant play overall. 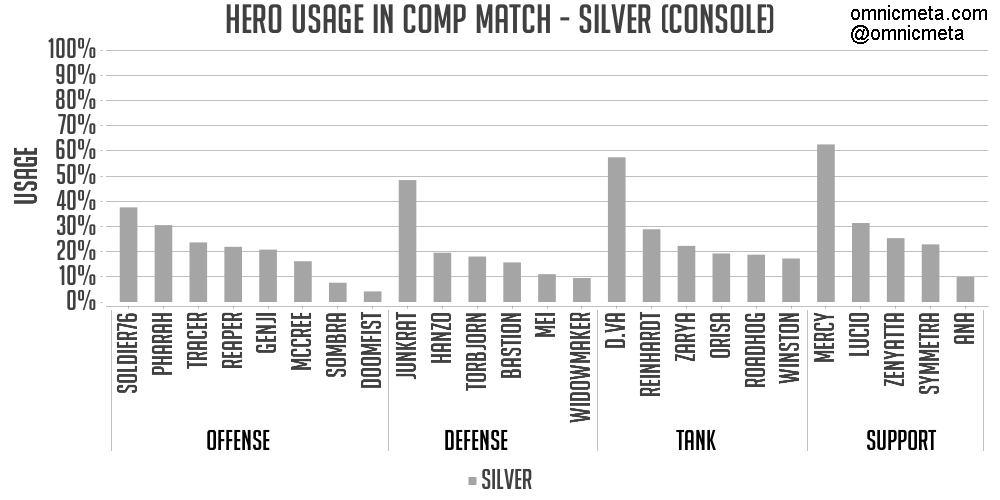 Offense/Defense:  Junkrat (+4%) continues to grow in popularity after the Patch 1.14 buffs - approaching 50% usage.  Soldier (-6%) has lost some popularity, though he and Pharah (+6%)  remain relatively popular.  Defense heroes on the whole are up 13% usage overall, including a +3% bump for Hanzo and a +4% increase for Torbjorn.

Tank:  D.Va remains the top choice for Tanks despite the changes in Patch 1.15.  Reinhardt (+4%) leads the way for the other tanks.

Support: Fewer players are choosing support in Silver, as Lucio falls -12%.  Mercy (-4%) is also down, but remains the most popular hero.  Lucio, Zenyatta, and Symmetra (+3%) round out the list of popular support currently. 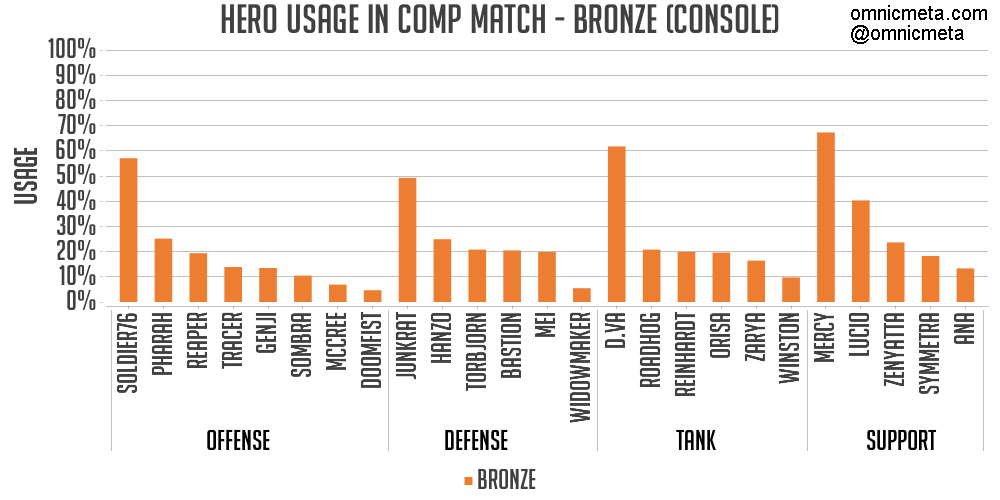 Offense/Defense:  Soldier (+8%) and Junkrat (+9%) have seen a big bump in play, and now are the most favorite DPS choices by far.  With Hanzo (+12%) and Mei (+5%), Defensive heroes are now on the whole more popular than Offense.

Support:  Mercy (-2%) continues to dominate, but Lucio closes the gap a bit, rising +6% this week.  Zenyatta loses -6%, falling closer to the same level of play as Symmetra and Ana.